Mumford & Sons are stuck in Tennessee traffic on the way to Bonnaroo a day before their headlining set, their bus nosing past a series of Waffle Houses and Flying J truck stops. “Is it going to take us three hours to get to this fucking place?” banjo-guitarist Winston Marshall wonders to no one in particular. A messy-haired Marcus Mumford flips channels on the bus TV, failing to find the Wales-Belgium soccer game. Marshall sits on the couch, his newly grown-out hair spilling onto his unbuttoned white Renaissance-style shirt, blasting Kendrick Lamar from his iPad.

It’s the second week of their summer U.S. tour, and one of the most important shows of their career: the first major festival set since the release of their third album, Wilder Mind, and a return to Bonnaroo, a gig they had to cancel in 2013 after bassist Ted Dwane fell ill. “It feels really lucky to be back,” says Mumford. “It makes us want to smash it even more than we would’ve done two years ago.”

Bonnaroo holds a special place in their hearts: They were nervous before they first played here, in 2010, but their heroes Dave Rawlings, Gillian Welch and Old Crow Medicine Show all joined them during their side-stage afternoon slot for a version of “Wagon Wheel.” “British bands are quite gang-y at London festivals,” says Marshall. “Here, they welcomed us with open arms.”

Mumford moved up to the huge second stage in 2011, and they were booked to headline the main stage in 2013 after the enormous success of their second album, Babel. But two weeks before that set, Dwane started feeling sick onstage in Berkeley. He played a few more dates before doctors told him he needed emergency surgery; a blood clot was removed from the surface of his brain. “It was just pure relief, really, because I had been feeling so bad for a week,” says Dwane.

The band held a tense meeting in an Austin hotel room, where Dwane insisted he could play Bonnaroo against doctors’ orders, but his bandmates outvoted him. “He was really skinny and he’d been sick for, like, two weeks, just vomiting his guts out — great weight-loss program,” says Mumford. “He still had that blue marker on his head. He looked fucking awesome. He looked like something out of Schindler’s List.”

“That might be my next look, actually,” adds Marshall.

Despite today’s traffic, they are in good spirits, bantering about the escaped prisoners in New York state (“Fair play to them,” says keyboardist Ben Lovett). Marshall makes fun of Bonnaroo’s slogan (“Radiate positivity, guys!” he says mockingly as he flips through the schedule) and wonders whether the waitress was flirting with him at breakfast that morning. “It was totally unprofessional — she practically invited me up to her room,” he says, with more than a little pride.

“You were peacocking,” says Dwane. In contrast to the rest of the group — especially Mumford and Lovett, who are both married — the exuberant Marshall makes no secret of how much he’s enjoying the rock-star life on the road: “I’m a single man, so I’ve got not much to go home to,” he says. “And I haven’t got many friends, either. I’m losing them. Will you be my friend?” When the bus finally makes it to the festival’s back entrance, he looks out the window and sees a crowd of barely dressed women. “Titties!” he exclaims. “Time for babe-watch. I’ll be at the front of the bus.”

Mumford are returning to Bonnaroo looking and sounding like a very different band from the one they were not long ago. Wilder Mind replaces the banjo, kick drum and acoustic instruments of their first two albums with drum machines, along with electric guitars soaked in delay pedals. “It’s been interesting approaching the set list, because we’re definitely different to how we were two years ago,” says Mumford. “Part of us has been like, ‘Well, should we be playing the show we would’ve played two years ago?’ but we don’t want to do that.” He smiles. “Is the audience going to want us to play the show we did two years ago? Probably they do, but they’re not going to get that. They’re gonna get a new one, which we think is way better.” 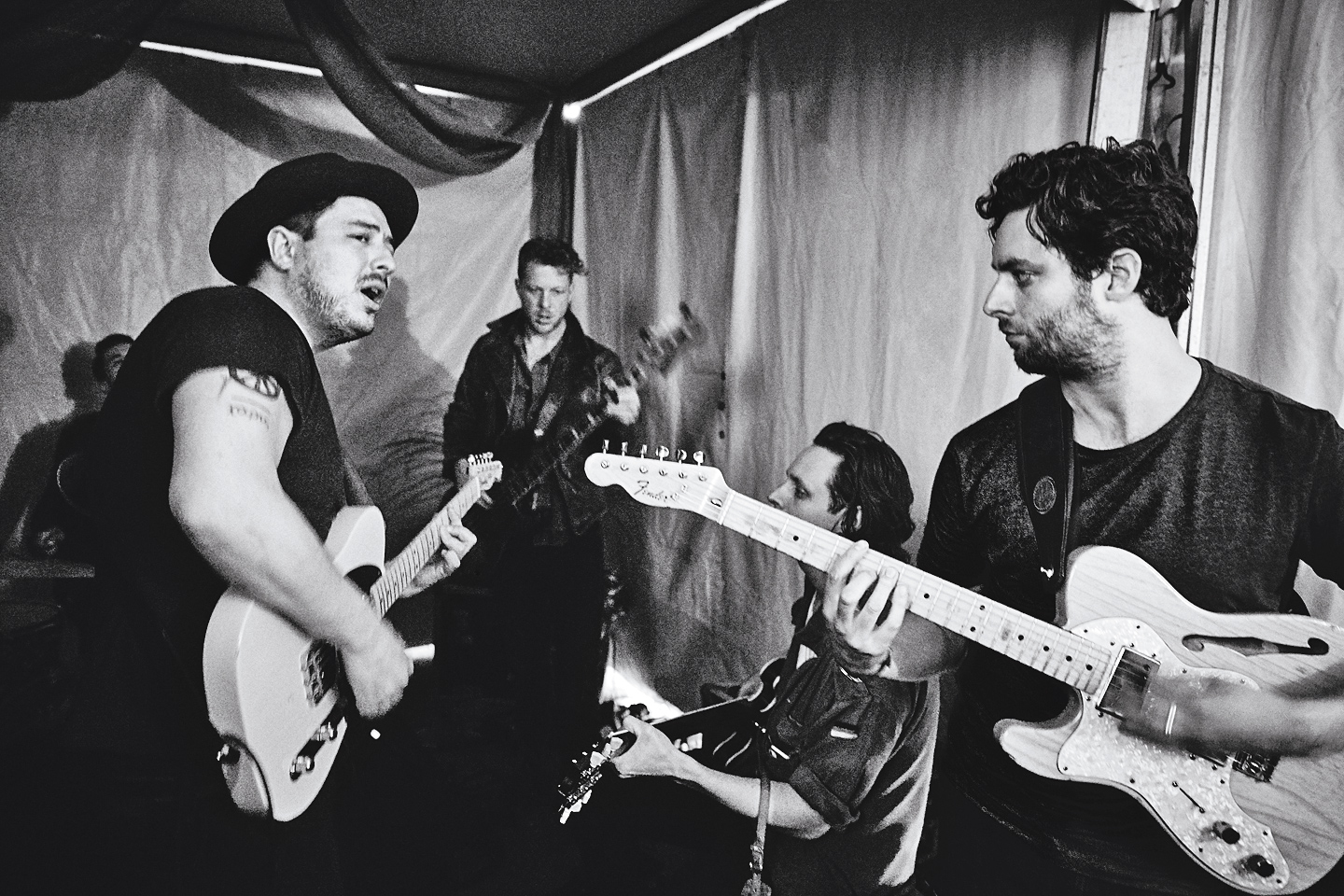 The instrumentation isn’t the only new element on Wilder Mind. After a conversation on the last tour, the bandmates completely changed their songwriting process. While Mumford wrote most of the God-fearing, Shakespeare-influenced lyrics of their first two albums, this time every band member brought songs to the sessions, with studio time divided equally between each member’s material.

The band also won’t say who wrote what song — although you can guess that Dwane or Marshall, both of whom recently split with longtime girlfriends, had a hand in breakup songs such as “Tompkins Square Park” and “Ditmas.” “There’s always been very little ego in the band, which has always been very healthy and good for us,” says Lovett backstage at a Massachusetts gig a few days before Bonnaroo. “Much to Marcus’ credit — especially with his name above the door and with people constantly pushing the limelight onto him — he as much as all of us understands the pure democracy of the band.”

Wilder Mind sold less than half of what Babel did in its opening week, and reviews have been mixed. But the band stands by it: “It’s our best record,” says Lovett. Adds Mumford, “People have been willing to come with us. Because we didn’t know whether they would. There was no guaranteeing, because we changed quite a lot of the formulas that were working for people, you know.”

In addition to acoustic instruments, the band has also abandoned the waistcoats and vests of its old wardrobe, leaning more heavily now on blazers and leather jackets. “[People are saying] ‘Wow, so you’ve really changed the way you look,’ ” says Mumford. “Everyone changes the way they look over a nine-year period, apart from my dad. What kind of a fucking question is that? It’s the sort of celebrity culture that we live in.”

Perhaps because he’s most in the public eye, Mumford is especially sensitive to any talk about his personal life. I met him earlier that week in Massachusetts, hours after a news report broke that his wife, actress Carey Mulligan, was pregnant with their first child. As we played basketball, I offered brief congratulations. “For what?” he said, stepping back. “Is that news? I think that’s gossip.” (He then headed to soundcheck and canceled the interview. He doesn’t mention it when we meet again at Bonnaroo.)

Back at Bonnaroo, after a searing set by My Morning Jacket as the sun went down, a sunburned crowd bounces beach balls and waits for Mumford & Sons to take the stage. From there, the audience seems to go on forever — more fans checked into Mumford’s performance on the festival app than any other act of the weekend.

Mumford stubs out a cigarette as the band reach the stage and deliver their solemn acoustic hymn “Lovers’ Eyes” in complete darkness for three minutes, until after the second chorus, when the lights go up with a kick-drum thud and a blast of horns and strings. The field erupts, and the bandmates harmonize as Mumford strums his acoustic furiously. “Holy shit, there’s a lot of you,” he says.

There are a few jitters — Mumford grabs a guitar and starts playing a different song when he was supposed to play “Lover of the Light.” “I fucked up,” he says, before heading to the drum set for a slow rendition of “Lover.” Afterward, he shakes his head and Marshall pats him on the back.

It was all forgotten by the time Ed Helms came onstage to play banjo on the singalong “Awake My Soul.” Mumford introduces the band, and Dwane gets the biggest response, the crowd chanting his name as he plays a goofy bass line, as if to deflect attention. “One of the reasons we’re glad he’s alive is so we could come back and play this festival,” Mumford says. “He did it to get more attention. What a wanker.”

For the final song, Mumford invites members of Dawes, My Morning Jacket and Hozier for the Joe Cocker version of the Beatles’ “With a Little Help From My Friends.” Mumford trades verses with Jim James and Taylor Goldsmith before he perfectly nails Cocker’s ragged, climactic shriek. Then, as the song enters double time, he grabs a tambourine and pounds away. As the song fades out, there are bro hugs all around onstage. “It was a good day,” Mumford says with a wave. “It was a good day.”