Mike Campbell doesn’t cry when he talks about the early-morning phone call that told him Tom Petty, his bandleader and best friend of nearly 50 years, had just been rushed to the hospital. The Heartbreakers guitarist doesn’t cry when he remembers playing to a sold-out Hollywood Bowl with Petty one week before that horrible October morning either, or even when he remembers seeing Petty’s body in a hospital bed just hours before his heart stopped beating. “They had his hair straight,” Campbell says. “He was medicated and very still, but he looked like an angel.”

It’s not until he thinks back to a brief encounter after that Hollywood Bowl show — the final time he spoke with Petty — that the eyes behind Campbell’s purple Lennon sunglasses well up with tears. “We said that we loved each other,” he says, wiping the moisture off his face. “Sorry I’m crying. It’s going to take me a while, but I’m at peace with the way we left things.”

Ten months after Petty’s death, Campbell is sitting in the large studio he keeps on the grounds of the Woodland Hills, California, estate where he and his wife of 44 years have lived since 1981. “This is my sanctuary,” he says. The control room is cluttered with reminders of his four-decade tenure in the Heartbreakers — vintage gear, master tapes, a poster for the band’s 1997 residency at the Fillmore West and a huge photograph of the time he met one of his all-time heroes, Chuck Berry. Right now, these mementos mainly serve to underscore the fact that those days are over. “It’s like an alternate universe to me,” he says, speaking in a -northern-Florida drawl that’s eerily similar to Petty’s own. “There’s the then and the now. It’s different lives.”

He spent last winter at loose ends, puttering around here or at the Campbells’ second home, in Kauai, Hawaii. “It’s a perfect spot,” he says. “Maybe when I get older, I’ll end up there.” But retirement will have to wait: As of this spring, he’s the new guitarist for Fleetwood Mac, replacing Lindsey Buckingham for a world tour that’s slated to begin in October and run for at least a year. “When [we] start playing a song,” he says, “I think to myself, ‘Wow, how did I get here?’ ”

Apart from the odd side gig, Fleetwood Mac is the first band Campbell has been part of since the day he met Petty back in 1970. Nearly every night of the Heartbreakers’ 40th-anniversary tour last year, the singer told the story of how it happened. It started when Petty, then 20 years old, saw a sign at a Gainesville, Florida, music shop, placed there by a guitarist looking for a band. He drove out to the stranger’s house and found Campbell holding a cheap Japanese guitar that looked like it had been left out in the rain for a couple of weeks. “I thought, ‘We better get out of here,’ ” Petty would tell the crowds. “But pretty quick he kicked off ‘Johnny B. Goode,’ and . . . when he got to the end of the song, I said, ‘Man, I don’t know who you are, but you’re going to be in my band forever.’ ”

Campbell grew up in Jacksonville, a few hours north of that first encounter. He worshipped Roger McGuinn and George Harrison, and as soon as he left high school in 1968, he formed a group called Dead or Alive. That band went nowhere. But with Petty, he became the first Heartbreaker among equals — the only one to share songwriting and production duties with Petty, the only one allowed a significant role on Petty’s classic 1989 solo LP, Full Moon Fever, a constant presence at his side over hundreds of shows. “It was more than friendship,” says Campbell. “It was almost like destiny or a divine power that brought us together. If he hadn’t called that day, our whole lives would have been different.”

That doesn’t mean Petty and Campbell shared everything. The guitarist was aware that his old friend was experiencing pain in his hip on last year’s tour, a 56-show slog that kept them on the road from April to September, but he didn’t know how bad it got — or what Petty was doing to numb the agony. “I’d check on him and say, ‘Are you OK?’ ” Campbell says. “He never said, ‘I’m dying! I can’t do this!’ The worst he would say was, ‘I can feel it, but I can do the show.’ His face was always full of joy. After a while, I quit worrying about him.”

Days after the tour ended, Petty suffered massive cardiac arrest at his Los Angeles home. The coroner’s report blamed an accidental drug overdose involving the deadly opioid fentanyl, plus painkillers and anxiety meds including OxyContin, Restoril, Xanax and Celexa. On the day he died, according to his family, his hip fracture became a full-on break, likely leading him to take the fatal drug cocktail as a form of self-medication. “He fought his way through that [final] tour,” Petty’s longtime friend Stevie Nicks said months after he died. “He should have canceled and . . . gone home and gone to the hospital.” 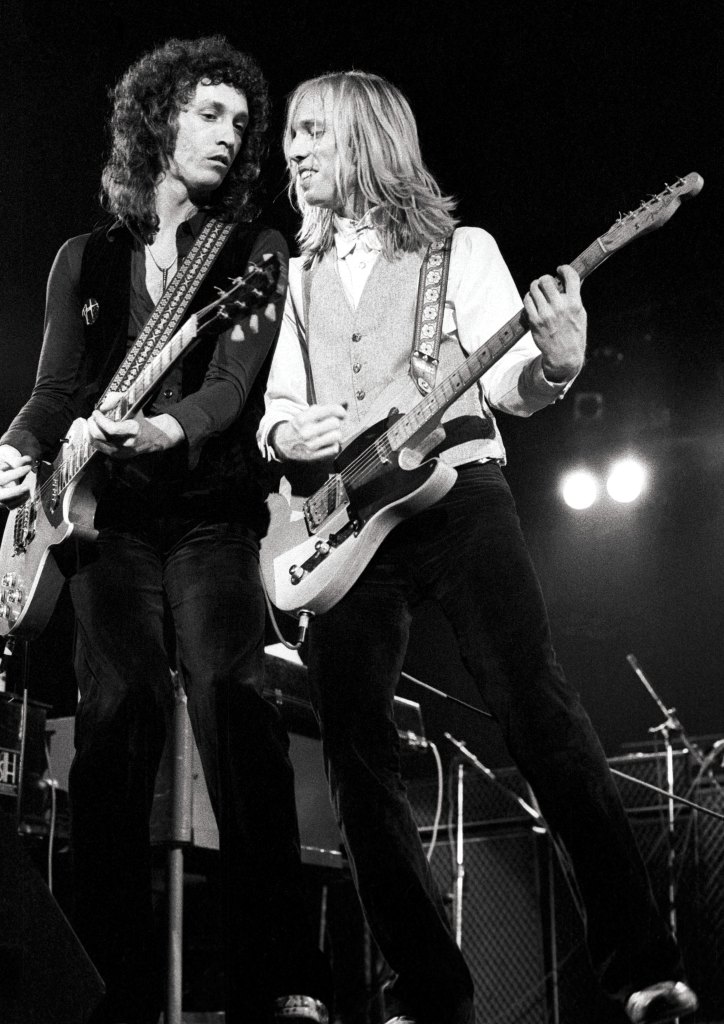 Mike Campbell and Tom Petty perform at the Hammersmith Odeon in 1977.

This is a delicate issue for Campbell, and he bristles when it’s brought up. Fairly or unfairly, Nicks’ statement implies a share of responsibility for the guitarist and everyone else who kept the 2017 tour going despite the frontman’s medical challenges and history of addiction. “Stevie is coming from a loving place,” says Campbell, who has been close with Nicks since the early 1980s. “But she wasn’t there. Once Tom made up his mind, nobody was going to talk him out of anything. If you said, ‘Oh, you should go to the hospital,’ he’d be like, ‘Fuck you, I’m doing the tour.’ Nobody forced him to do it.”

The more we discuss this subject, the more forlorn Campbell seems. “What’s the point of hindsight?” he asks. “All I know is he did what he wanted to do, and we backed him up. We were there for him. And he was having the time of his life. I’m not jiving you. He was loving that tour.”

Campbell alludes to unspecified doubts about the official account of Petty’s death, but admits he hasn’t gone over the coroner’s report in full. Ultimately, he seems to see it as beside the point. “So what if the guy had a mishap?” he adds. “Tom was a human being. Whatever happened happened. What’s important is the music. That’s what they are going to remember.”

In the months following after the tragedy. imagining a future for the Heartbreakers without Petty was impossible. “I thought it would be too sad,” Campbell says. “Where’s the other brother? I’m not ready to face that.”

In time, he started to sketch out ideas for the first-ever national tour by his side band, the Dirty Knobs. It’s something he’d wanted to do for years, but Petty — concerned that this ragtag collection of Los Angeles session cats would somehow take away from the Heartbreakers — would never allow it. “Tom and I had our moments [of disagreement],” says Campbell. “We kept it private. But that type of friction was good for the music. It drove us to put a little more juice into our songs.”

He was sitting by the pool at his house, around his 68th birthday, when he got a phone call from Mick Fleetwood. Nobody knew it at the time, but Fleetwood Mac had just parted ways with Buckingham and were in the market for a new guitarist. “I’d met Mick once or twice, but never really got to know him,” says Campbell. “But he goes to me, ‘I’ve been listening to your music a lot. Would you be interested in joining the band?’ ”

Fleetwood’s offer to make Campbell a full member of the storied Southern California band — not a hired hand — was both exciting and daunting. “I thought I’d never play big gigs again,” Campbell says. “I thought I’d never be on the G4 [private jet] again, and I’d never again play the Forum. Then all of a sudden, I’m like, ‘What the fuck? How did this happen?’ ”

The afternoon after the emotional interview at his house, Campbell is at an enormous soundstage at Sony Pictures Studios in Culver City, California. This is where the tornado sequence for The Wizard of Oz was filmed in 1939; it’s also where the guitarist will be reporting for work over the next eight weeks of intense rehearsals with Fleetwood Mac. Campbell, dressed casually with an oversize scarf-tie that wouldn’t be out of place on a pirate ship, sits on a couch in the back while technicians scurry about and set up the full-size arena stage with instruments.

The rigorous schedule is a change from the Heartbreakers, who used to jam around for a week or two at most before a tour. Then again, there’s a lot of ground to cover: Campbell is learning 60 new songs more or less from scratch, as is Crowded House singer Neil Finn, who’s taking over most of Buckingham’s vocal parts. “Mick has this aptitude — he sniffs out these great people to come join us,” Christine McVie tells me. “I feel like I’ve known them for years, and I actually don’t know them very well.”

In fact, unlike Finn, who barely knew most of the members of Fleetwood Mac prior to his audition, Campbell has a long history with the Mac. He and Buckingham became friendly acquaintances in the 1980s, and Buckingham sang background vocals on the 1996 Heartbreakers classic “Walls (Circus).” “I had no part in him leaving,” Campbell says. “That’s between them.” 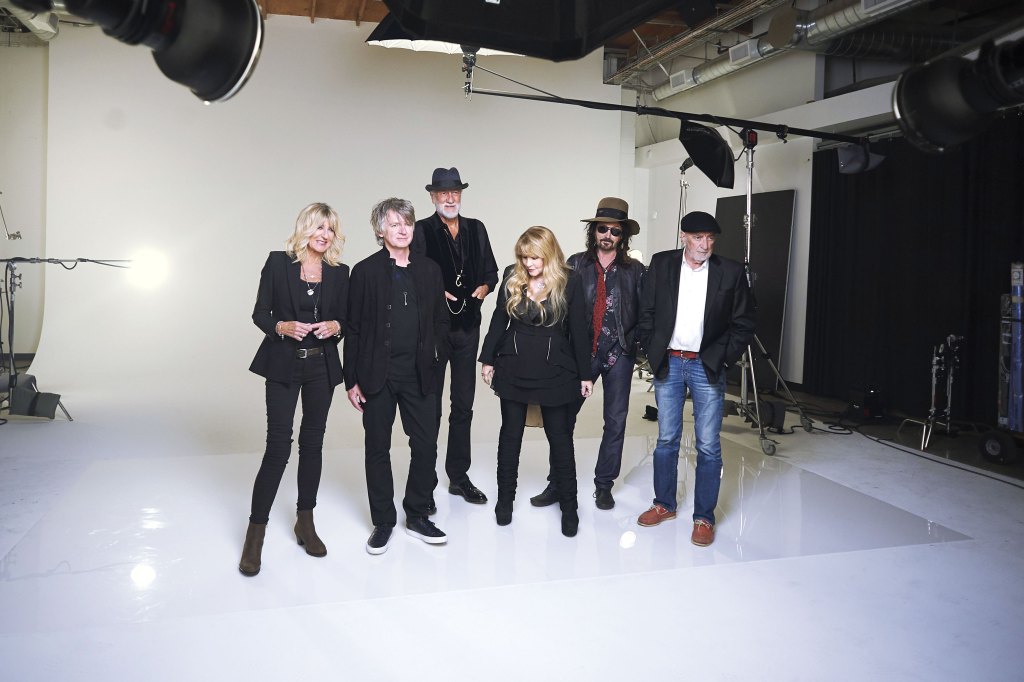 He mentions that they’ve been rehearsing a few songs that predate Buckingham and Nicks’ 1974 arrival in the band, including a version of 1969’s “Oh Well” with Campbell on lead vocals (Finn found it too bluesy). They’re also working up a rendition of Crowded House’s 1986 hit “Don’t Dream It’s Over” — and Petty’s “Free Fallin’,” over Campbell’s objections. “Stevie wanted to do that one,” he says. “I love that song, but I’ve just played it so much. I said to her, ‘Do we have to?’ She said, ‘The crowd will love it. It’ll be a moment.’ So I’m getting into it again.”

It’s only day four of the rehearsals, and Campbell is still adjusting to the idea of living out of a suitcase for the foreseeable future. In some ways, it’s a relief from the grieving process. But even as he prepares to walk onto the rehearsal stage with his new band, Tom Petty is deep in his thoughts. “It still seems unreal to me,” Campbell says. “I’m past the point where I’m living with grief every minute, but sometimes I’ll be driving and one of our songs come on and it’ll hit me.”

He mentions attending a recent ELO concert at the Forum, where songs from Full Moon Fever came over the preshow PA. “Hearing them in a big room like that just shut me down,” Campbell says, seemingly on the verge of tears again. “We wrote those songs together. We lived a dream together. You can’t just snap your fingers and get over something like that.”