Lars Ulrich knows Metallica’s reputation. “Back in the day there was a lot made about Metallica and ‘Alcoholica’ and all of our drinking habits,” he says. “But we didn’t have any money to drink anything other than white-label shitty beer and vodka. It wasn’t until we got to L.A. to make [1989’s] …And Justice for All album and the Black Album that I got more exposed to whiskey and Jack Daniel’s. Whiskey was something that we graduated to.”

Now, after the band has dramatically tapered their drinking habits, they’re going into the whiskey business. About a year and a half ago, they launched their own Sweet Amber Distilling Co. and now they’re putting out their first release, Blackened, a blend of bourbons, ryes and whiskeys from around North America that they finish in black brandy barrels. The group decided to go into the whiskey business to find a new way “to connect with the audience,” according to the drummer, almost as an extension of its merchandizing.

Their chief concern? Whiskey was an “old man’s drink.” “It felt like it belonged to a different generation when I was really young,” Ulrich says. “I would like to think that Blackened, if anybody who’s 21, 22, would feel was something they could embrace that’s not ‘my dad’s or my granddad’s beverage.'” So they teamed with Dave Pickerell, an onetime professor of chemistry and master distiller for WhistlePig who previously worked at Maker’s Mark and helped them “Metallicize” the drink.

Metallica's Lars Ulrich: What I Learned From My Band's 'Day of Service'

Metallica Talk 30 Years of 'Master of Puppets': 'We Were Just Kids'

“We didn’t want to just get in the business with somebody who had made whiskey and slap a Metallica label on it,” Ulrich says. “We felt it was important to be able to look our fans in the eyes and go, ‘This is something that we started from the beginning and it’s something that has at least, for better or worse, a Metallica touch to it.'”

With artists from Bob Dylan to Hanson all pedaling their own brands of alcohol, Metallica have found an unusual way to put their own fingerprints on Blackened. Where some other distillers use sound waves to speed up whiskey’s aging process or, as Pickerell says, “to make the barrels feel happy,” Sweet Amber has developed a patent-pending sonic enhancement process they call “Black Noise” that uses low frequencies to enhance the flavor by vibrating the casks with, of course, Metallica’s music.

“I’m always one that has skepticism initially,” bassist Robert Trujillo tells Rolling Stone. “Then I study whatever it is and check it out. I have to go through a process. I was won over by this process maybe five or so months ago.” Now, he says, he calls the process “the mash pit,” because “there’s a molecular structure that is somehow mixed in with the sound and vibration.”

Pickerell is hesitant to explain too much of the process, since it’s patent pending, but reveals that the brandy casks contain a lot of wood chemicals. “Right near the surface is the wood caramel, so when you burn the barrel, you make char and right behind the char there’s what people call the red layer,” he says. “That’s where the wood sugars get hot enough to caramelize but not hot enough to burn. There’s a lot of caramel right underneath the char, so the thing I’m going for is pulling some extra wood caramel out. As the ligaments in the wood break down, they form six different compounds that all taste and smell like vanilla – one actually is vanilla. If you can cause the interaction between the whiskey and the wood to be enhanced by sonic vibration, you can cause the whiskey to pull extra goodies out of the wood.” Ultimately, he says, it gives the beverage a deeper caramel note.

He intends to prove it, too. “We can show with colorimetric data that we’re impacting the color of the whiskey,” he says. “As soon as we’ve got the patent all cleared up, we’ll publish the scientific data on it.”

Pickerell drew inspiration for the process from his time as a cadet at West Point. He became an usher at the school’s church and became friendly with its organist, Dr. Davis. Over the years, organists there built out the instrument to the point that it now has more than 23,000 pipes. One day, Dr. Davis gave him a private concert and played him Bach’s Toccata and Fugue in B Minor (think Phantom of the Opera) and went on to demonstrate the instrument’s full power, playing its lowest note, which Pickerell recalls vibrated at a rate of 16 hertz. “You could almost count the vibrations – it shook your guts,” he says. It was so powerful, he recalls Dr. Davis saying that if he played it too long, it would damage the building.

“It just fascinated me,” he says. “So when we got into this project, I said, ‘Now’s the time to play with this.'” He was aware that the band had a working relationship with Meyer Sound, who created components of the sound system it uses at its live concerts, and worked with them on a giant subwoofer that Trujillo likens in size to a guitar case (or “casket,” as he calls it). They then play the ultra-low frequencies from Metallica’s music, based on playlists all four members made, at the barrels. “Their clean, crisp rhythms assist in the process, but I’m sure you could get an effect just by hitting the barrels with a low-frequency hum,” Pickerell says. “But to have it bounce around has a larger effect as well.”

“We’re talking about the super subs down in the low frequencies,” Ulrich says. “You know when you’re driving next to somebody on the street and you hear, like, super great bass-heavy tracks coming out of the car and you can just feel it rather than hear it? That’s because the subsonics actually move the air and the molecules.”

The playlist for the first batch featured songs selected by each band member; fans can refer to the batch number and listen to playlists of the songs. Ulrich’s selections included “Sad but True,” “One,” “The Outlaw Torn” and “Broken, Beat and Scarred.” “It was completely impulsive,” he says. “There’s no science behind those choices. I’ve always felt that ‘Broken, Beat and Scarred’ is under-appreciated and has aged differently – to use a whiskey term – than other songs. I like playing ‘Sad but True’ live, it’s one of my favorite songs, ‘One’ is ‘One’ and ‘The Outlaw Torn,’ who the fuck knows.” 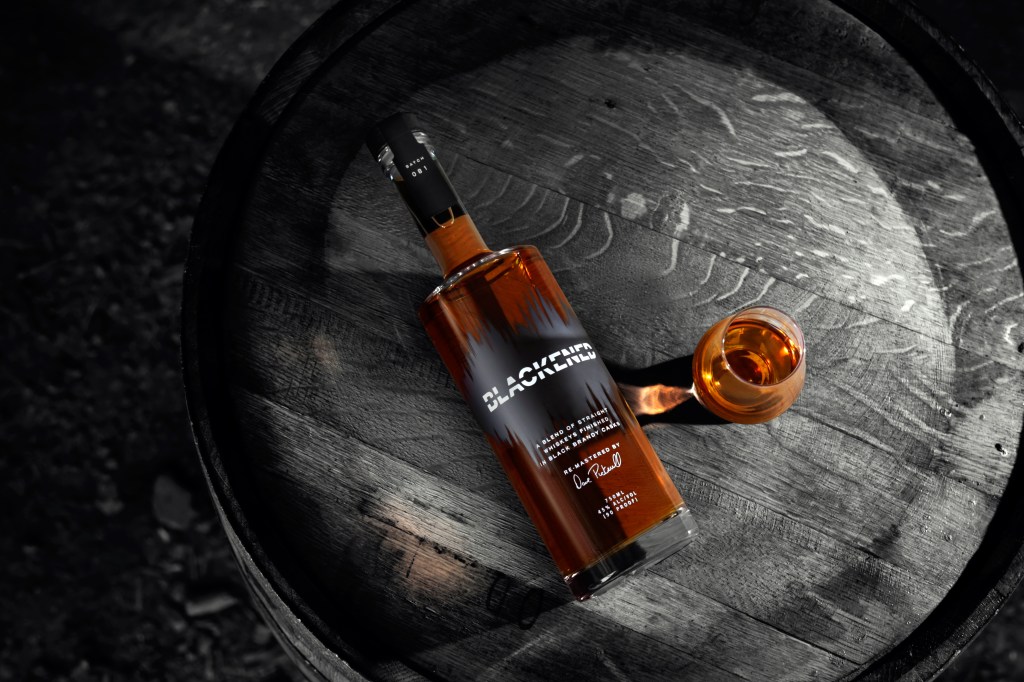 The songs that Trujillo – who earned the nickname the “Whiskey Warlord” when he played bass in Ozzy Osbourne’s band – all come from before his time in Metallica: “Frayed Ends of Sanity,” “Fight Fire With Fire,” “Orion” and “Disposable Heroes.” “I tended to go with some of the more bass-driven stuff like ‘Disposable Heroes,’ because it’s stuff with a pulse,” he says. “I’m imagining the molecules moving around to the pulse and the beat. I’m thinking drums and groove. I’m thinking beauty and dynamics and thinking of it like a work of art. That’s just me in my twisted way.”

Pickerell is happy with the way it worked out. To his palate, it’s a “rich, full-bodied whiskey” with notes of dried fruit because of the brandy finish. He recently brought the whiskey to a tasting with a malt whiskey society team and got a thumbs up from “an older gentleman who looks like he’s right out of a page from a scotch whiskey magazine.” The man smelled it, examined the color and tasted it. “He looked so stern,” Pickerell recalls. “He’s chewing on it, smacking his lips, and he gets done and looks at me and says, ‘Frankly, I’m quite surprised. This actually tastes good.’ Well, OK, that’s like saying it doesn’t suck but I was expecting this guy to give me the bitter beer face because of the way it looked. The response we’re getting is good.”

The sample the band sent Rolling Stone has a light body, a sweet taste and was surprisingly smooth considering it was shaken up with the double-bass assault of “One.” There’s not much of an aftertaste either. “I’d use the term ‘earthy’ to describe it,” Trujillo says. “I like a little bit of bite in there but then you’ve got a little smoothness, more of a balance.”

Ulrich, who has yet to “Pepsi challenge” it with a version that hasn’t been sonically enhanced, also approves. “The taste is light, it’s assertive, it feels very modern,” he says. “It’s, I guess, warm. I like mine chilled a little bit with a big ice cube.

“I sip it in very small mouthfuls,” he says, sounding like anything but the drummer of a band once known as Alcoholica. “It’s very drinkable.”