There is no artist that users of the song-identification app Shazam want to know more about than Brooklyn-born duo Marian Hill. “Down,” a moody selection from their 2016 debut Act One, was featured in an ad for Apple’s wireless earphones AirPods that premiered in January, featuring Los Angeles street dancer Lil Buck taking to the air. The pairing of the eye-catching Apple spot with the track – a spare duet between a simple piano line and Samantha Gongol’s smoke-plume voice that explodes into a stuttering beat –  led to people using the service to figure out what they were listening to. Two months after the ad’s debut, “Down” still leads the Shazam chart ahead of pop heavy-hitters like Ed Sheeran and Bruno Mars – and it’s starting to catch fire at pop radio as well. Rolling Stone caught up with Gongol and producer Jeremy Lloyd to talk about their unique road to success.

You’ve known each other for many years now – when did you first bond over music?
Jeremy Lloyd: We’d been singing in choirs for a long time, but I remember a time in high school when Sam was like, “Hey, are you writing songs? What is that like? How do you do that?”

Samantha Gongol: I don’t remember that
specifically, but I’m sure I said something similar. We met in middle school, but it was really high school when we started to embark on separate musical projects, and then also come together to talk about it.

What kind of music was that?
Gongol: Bad singer-songwriter music.

Lloyd: We stayed in touch throughout college. When we were home on break, we’d catch up, and the way [we] would catch up was playing each other music we’d been working on. That turned into writing together. It was pretty natural and easy. It was just that. It wasn’t like a super-close friendship. It was a very regular, normal, comfortable friendship. Then, when we wrote [the 2015 track] “Whisky” together, we realized we were on to something.

How does [saxophonist] Steve Davit come into the mix? How did you first meet him and collaborate with him?
Lloyd: We’ve been good friends since seventh or eighth grade. He’s always been a really close friend and an amazing musician. When Sam and I were ready to figure out what the Marian Hill live show looked like, he already had backed us one time. I’d been like, “Hey, could you just, like, improvise a bunch of stuff, record it and send it to me so I can chop it up?” … Every now and then, we go into the studio and record solos or he’ll send me more stuff to chop up and mess around with. He’s mostly involved in the live part of the process, but he’s also a seriously dope sample guy. People love Steve. We were playing in Kansas City at the Midland Theater and he got a loud cheer – tons of people chanting his name. 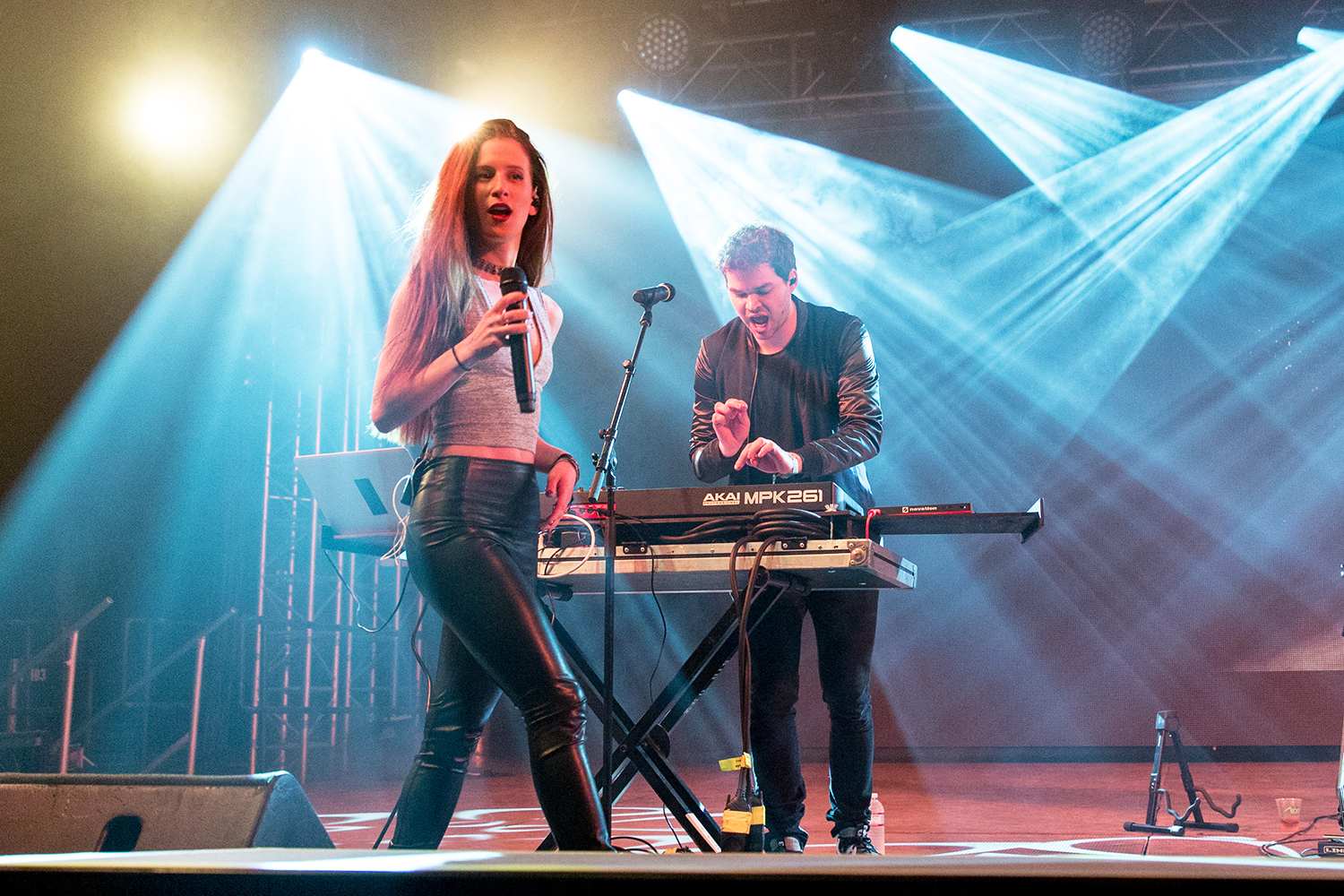 How do you bring these songs into a live setting?
Lloyd: I’m a real believer in playing as much as possible I can of those [sound] chops, so I’ve made a setup for myself over the years where I’ve got drum pads and keys … and some knobs. I’m basically constantly busy. I like to play each element as it’s introduced.

Gongol: We create this music in the comfort and safety of the studio. So something that I think will go well live doesn’t always hit in the same way; the audience latches on to other moments that maybe we didn’t anticipate. The more that I perform, the more I sing my parts a little bit differently. It’s one of my favorite parts [about being in a band], but it’s definitely the scariest, too.

What was it like when you first saw the commercial?
Gongol: I actually saw the commercial for the first time with my parents in a hotel room after we played Fallon. That was really, really cool. It’s just so beautiful – they nailed our aesthetic. Apple’s an iconic brand. We grew up watching those commercials. And [knowing that] artists have had incredible careers after [being featured in Apple ads] was really exciting to me.

What would you say has been your biggest challenge over the past year?
Lloyd: Now that things are picking up so much, it’s figuring out a balance in life between the gigs and the touring and the traveling we need to do and writing music – which is the reason that all of this stuff is happening. But having time for my friends and my family is a vital part of my mental health and well-being. As things have gotten busier, negotiating that balance has been an interesting task.

Gongol: For me, the biggest challenge is keeping my head down and enjoying the moment, and letting myself be happy with one success. I think it’s easy to get caught up in little things and little frustrations. It’s important to just take a step back and relax.

What about your biggest triumph?
Lloyd: Being Shazam’s Number One in America, that’s a serious triumph. That’s what you want people to feel when they hear your music for the first time: “What is it? I need to know what it is so I can hear it again.”