As a close friend and collaborator of fellow Chicagoans Chance the Rapper and Vic Mensa, Kevin “Knox Fortune” Rhomberg is used to ceding the spotlight. But even he has his limits.

“I remember I was at Umami Burger with Vic a year ago,” Rhomberg recalls while eating a sushi lunch in his manager’s office in Chicago’s Logan Square neighborhood, “and one of the busboys was like, ‘It’s pretty dope you get to be in Vic’s entourage.'”

Having produced songs for Mensa, executive-produced Joey Purp’s iiiDrops, and, most notably, established himself as a solo artist with a winning guest vocal on Chance’s Coloring Book banger “All Night,” the 25-year-old can only laugh at the memory. “I was like, ‘Fuck you, dude! You have no idea who I am!'”

Rhomberg may not be anonymous for long, however. Last Friday he released his debut album, Paradise, a 11-track collection full of hooky and whimsical indie-pop that the musician likes to say is “a cross between the Beach Boys and the Beastie Boys.”

“It’s been a long time coming,” says Rhomberg, who served as Purp’s touring DJ the last two years and, to that end, recorded Paradise in various locales from London to Barcelona. Earlier this year, he spent two weeks at Rick Rubin’s Shangri-La studio in Malibu. He was there to assist his friend and rapper Towkio with his album, but, “I’d be a loser if I didn’t come out of there with some of my own bangers,” Rhomberg says with a smile as he rolls an early-afternoon joint.

Focusing on his own material gave Rhomberg the freedom to experiment. “With me there’s no compromise. I can do whatever the fuck I want,” says the shaggy-haired musician who admires genre-crossing artists like Blur’s Damon Albarn. “It was so freeing after doing all this crazy production work for other people just to be like, ‘That’s what I like and that’s what’s going to do.'” 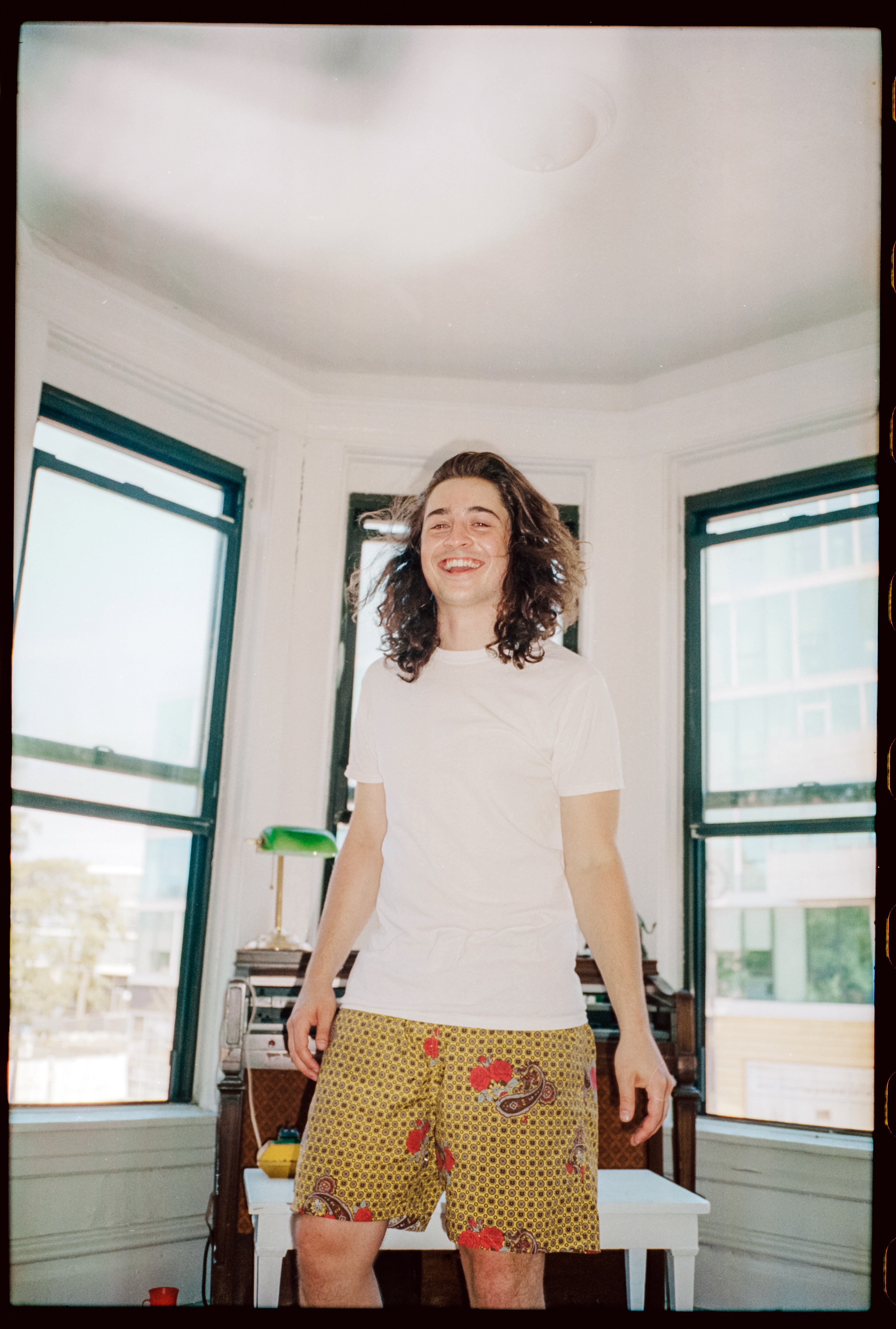 As a teenager raised in the west Chicago suburb of Oak Park, Rhomberg was a member of a Animal Collective-inspired indie-rock trio (“We were posted on Gorilla Vs. Bear,” he notes proudly), but was long fascinated by production work. He’s quick to clarify that “while in my generation the producer is the beat maker,” it was instead the collaborative nature between a producer and artist that most intrigued him. “Traditional producing, that’s totally my idea of what a producer is supposed to be doing,” he notes. “That was the role I was super fascinated with as a kid. Putting the color in the painting.”

His production career began when he met Mensa through a mutual friend, Cody Kazarian, who now serves as the rapper’s manager. “I would be at Cody’s house all the time playing beats and he’d be like, ‘I gotta show this to Vic.’ I had no intention of doing rap production. I was coming from a band perspective.” Vic liked what he heard and, as Rhomberg notes, it was Mensa and fellow Chance collaborator Nico Segal “who were the first dudes to be like,”Yo, you’re good at this!'”

Mensa helped land Rhomberg an internship at a local recording studio where he honed his production chops during off-hours. In 2012, around the time Mensa was putting together his Innanetape mixtape, Rhomberg began working at EL-PZ studio under the tutelage of Papi Beatz. It was there Rhomberg got close with Purp and fellow rapper Kami, and helped produce their joint Leather Corduroys project Season, followed soon thereafter by Purp’s iiiDrops.

The musician had long been working on solo material, but only six months ago did he decide to officially pursue a solo career. “People would be like, ‘Your solo stuff is really gonna be the thing for you. I’m telling you’ and I’d always be like, ‘Yah. Maybe.’ But then after ‘All Night’ it was like I’ve been given this crazy opportunity. I have a Grammy. I have the ability to contact people I like if I need their help now. If I weren’t to take full advantage of it I’d be tweaking on myself. I was trying to step away from that dude who is locked in the studio producing all day.”

Rhomberg used to perform at open mics as a singer-songwriter but has yet to perform as Knox Fortune. It’s an exciting if not slightly nerve-wracking proposition for him. “It’s scary,” he admits. “I don’t necessarily have stage fright or anything like that. But I gotta make it right.”

And while he still doesn’t necessarily think of himself as famous, he knows it might be unlikely to be mistaken as a hanger-on for long. “I read shit about myself on Reddit. Weird personal things. Like, ‘Whoa! Why do you know about my girlfriend from sophomore year of high school?’ he says with a laugh. “It’s always cool for me though. And plus, I’ve already seen all my friends go through this. So now it seems super normal.”