Famed for their raucous live sets and glitchy, aggressive take on electro-punk, Canadian duo Crystal Castles was on the brink of collapse in 2014, after founding vocalist Alice Glass announced her resignation on Facebook. “Although this is the end of the band,” she said, “I hope my fans will embrace me as a solo artist in the same way they have embraced Crystal Castles.” In 2015 the singer released her first solo single, “Stillbirth,” and in a heartrending press release, alluded to her recovery from abuse, stating proceeds from the track would go towards anti-sexual assault network RAINN.

Contrary to Glass’ claims that Crystal Castles would end with her departure, founding producer Ethan Kath was poised to continue the project without her, even dismissing the gravity of Glass’ role in the band. In April 2015 Kath released “Frail,” a track on the band’s Soundcloud featuring an unknown singer, who he only referred to as “Edith.” He would later redact his previous statements about Glass, stating “Despite everything, I’ll always love her and sincerely want her to do well and be happy.”

Out August 19th, the band releases Amnesty (I), the first Crystal Castles record starring Glass’ successor, the enigmatic Edith Frances. Recorded in London’s famed Konk Studios, founded by the Kinks, Amnesty (I) continues the political trajectory of previous album III, with a procession of grim industrial ballads, interspersed with sinister glimmers of Frances’ soprano. No other publication has spoken to Frances, until now.

Frances met Kath at a Negative Approach show in November 2013, at Los Angeles club Los Globos. “I knocked him over in the pit,” she laughs. A long way from her home state of Iowa, the 21-year-old was couch-surfing in L.A. when she encountered Kath – who would later recruit her as the new lead singer of Crystal Castles. While on tour in Europe, the singer discussed her very first tour, paranormal activity and Black Flag.

Where are you tonight?
Budapest. It’s really pretty. We’re playing with FIDLAR.

It’s really hard to research you! Your Internet presence is very … scarce.
You know, I thought about making my Tumblr public, boosting my Internet presence. I’ve done a pretty good job of staying private. But I’ve always kind of been that way.

Have you ever gone on tour or played in any other bands before?
I’m from a little tiny town in Iowa. … It’s called Woodward. Dirt roads and everything. This is my first tour, and my first time in a band. I’ve played piano, bass and a little bit of hand bells. … Pretty much everything I can pick up. I was in church choir for years, I’ve been singing forever. I’ve tried starting projects before but it never really felt right until now. That’s why being in this project is great for me, because it’s the first time I’ve really felt a musical fit. It’s great to go on my first international tour with something that fits and with someone I feel connected with.

How did you and Ethan link up and start making music together?
Oh, that story [laughs]. I was couch-surfing and staying with a friend of mine. I decided to go out to a Negative Approach show in Los Angeles. When I was in the pit, I actually flew into somebody and knocked him over. I apologized to him after the show. Now I’m unlocking the door to this place I’m couch-surfing at, and I see this guy over at the back house, and it was Ethan. It was the same guy I knocked out at the show. I was like, “Hey, what’s up?” 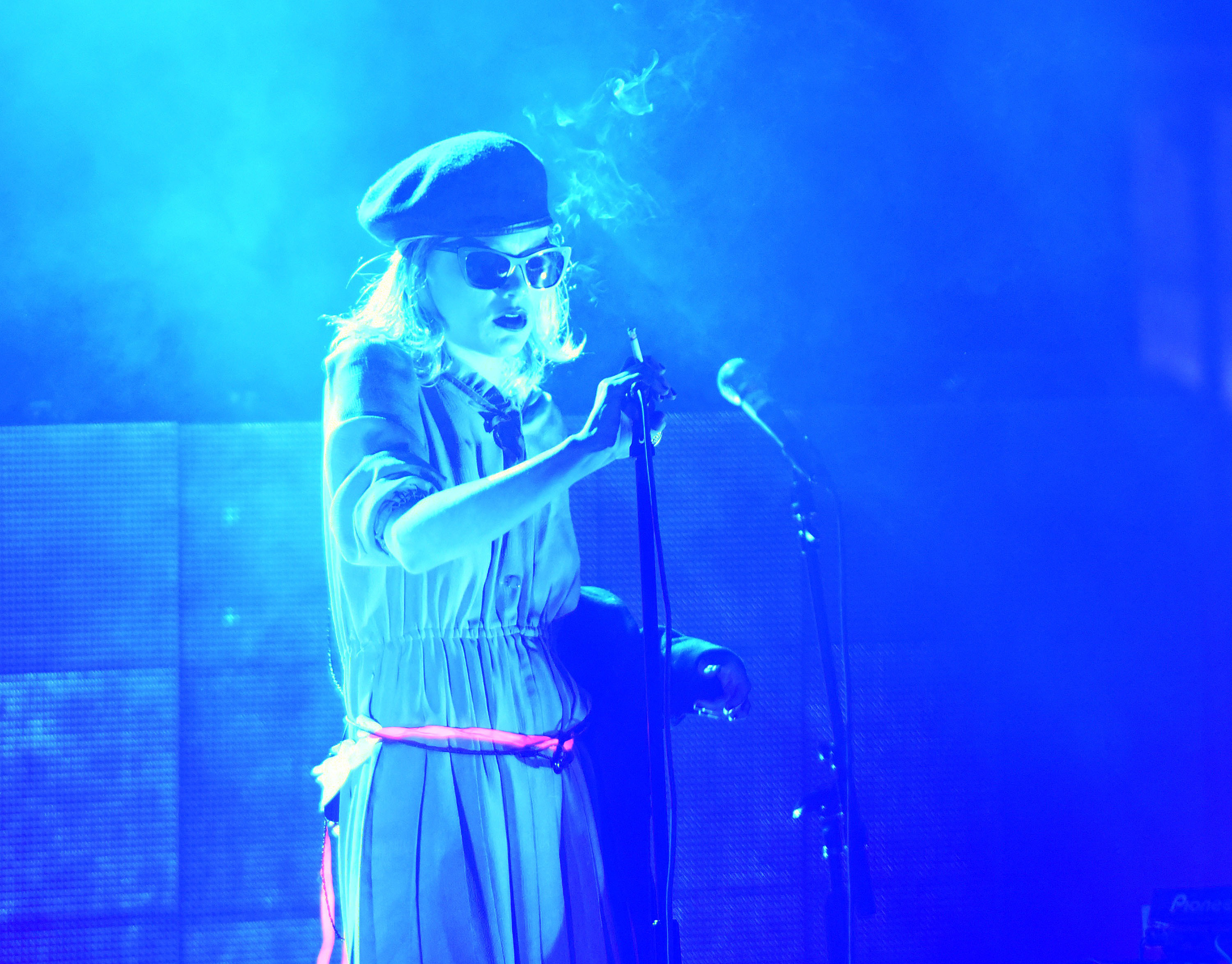 Were you familiar with Crystal Castles at all?
I’d heard of the band before, but I didn’t know it was a guy named Ethan.

Your new album, Amnesty (I), comes out Friday. What was the recording process like?
We recorded in this old house that was turned into a studio in London. It’s called Konk Studios. They say it’s haunted. One night our sound engineer was so spooked that he ran out of the building and was like, “OK, we’re done for the day!”

Did you believe him?
I like to have an open mind. … It always sounded like people were running around the house.

Do you think this heavily influenced the direction of the album, sound-wise?
Of course! I feel like wherever we’re creating things we’re influenced by the environment. The influences I had in mind were industrial, like Skinny Puppy, and melodic, like Slowdive. With the attitude of Negative Approach. Lots of yelling and passion.

You open with a track called “Femen.” Is this a shout-out to the Ukrainian women’s group?
We can’t say what that’s named after. … We’ll leave it open to interpretation.

Did you and Ethan write all the songs together?
I wrote “Fleece,” “Concrete” and “Enth.” The process of writing it was very special to us. Amnesty (I) was written about a lot of things going on in the world. Human rights are central to the album. There were things we think needed to be brought to light, things that needed to be said. One-hundred percent of the proceeds from the album’s physical copies will go to Amnesty International.

Given that amnesty is the overarching theme of the album, what were some other issues you chose to tackle?
Just stuff that’s really important to us. Like LGBTQI rights, women’s rights – “My Body, My Rights” is a big thing Amnesty [International]’s pushing right now –  the rights of children, fighting against discrimination. So many things.

Lyrically, there’s this constant push and pull between predator and prey, by those who wield power and those wounded by it. Can you talk about this dynamic in relation to a song you wrote?
There’s a line in “Frail” that says “Glow through the veil.” It’s about women in burqas. Regardless of whether you’re veiled or not, you can rise above. You can wear it with pride. Some people choose to, and some people don’t. In either case you should feel empowered.

We had a lot of time to discuss things, casually, and kind of get to know how we felt about the world. We decided that we agreed on some huge issues and we decided somebody needed to speak out on them. It was just natural that Amnesty (I) was the result.

Amnesty (I) is Crystal Castles’ first album since the departure of Alice Glass. … Are you open to talking about her departure and the aftermath?
No … We’re only talking about the new era. And, you know, only because we want to respect her. … Not being able to talk about herself and be here.

That’s fair! Consent is key. But in this new era – do you find that Crystal Castles fans are receptive to your performances? When it comes to replacing a frontperson of a band, many fans can be unwelcoming towards a newcomer.
Alice was an awesome frontwoman, but it is crazy how receptive people have been. It’s been overwhelmingly positive. The shows are fun and … loud. Just think about all the bands that have had second singers. … Like Black Flag, Iron Maiden, Carcass … The list goes on and on. And it’s amazing to get a good reaction. I mean, my favorite Black Flag singer was Henry Rollins, and he wasn’t the first lead singer they had. It goes to show you, it’s an evolution. Things change. Growth is always positive.