Livin’ on a High Note isn’t just the name of Mavis Staples‘ new album, out February 19th; it’s also how she feels these days. While the singer acknowledges that she should be talking about retirement after a 60-year-plus musical career — both as a member of the legendary Staple Singers and as a solo artist — Staples says she’s entering a new chapter. The proof comes in the form of High Note, which features songs written especially for her by a diverse range of artists, including Nick Cave, Ben Harper, Bon Iver’s Justin Vernon, Neko Case, M. Ward, Tune-Yards and Son Little. And with her recent Grammy win and an upcoming documentary, Mavis!, the 76-year-old Staples is on a creative roll.

Mavis Staples: The Music That Made Me

“That’s exactly what I’m doing,” Staples told Rolling Stone recently. “I’m livin’ on a high note. I’m having a rebirth. I’m so happy. The fact that all of these young writers would take time out of their own schedule to write a song for Mavis — it had to be titled High Note, this album.”

The idea for the new record came from a meeting between Staples, her manager and Andy Kaulkin, the president of Staples’ label, ANTI-. “All of a sudden,” Staples recalls, “Andy said, ‘Mavis, what do you think about different writers writing songs for you?’ I said, ‘I think that would be great, if I can get them to write songs.’ He said, ‘Everybody would be happy to write a song for you.’ And lo and behold, it got started like that.”

After working with producer Jeff Tweedy for her last two albums, You Are Not Alone and One True Vine, Staples turned to M. Ward to produce Livin’ on a High Note, whose sound draws from soul, blues and folk. “I’ve been a Staple Singers fan for a long time,” Ward says. “I went out and saw Mavis and her band play and I really loved it. I started collecting songs from different songwriters. It started to come together in a magical kind of way.”

“He was great,” Staples says of Ward. “I didn’t know him, and I was asking around — Kelly Hogan and Neko — and they said, ‘Oh, Mavis, you’ll love M. Ward. He’s shy, he’s bashful, so don’t be offended if he don’t talk to you a whole lot.’ I said, ‘No way he’s not gonna talk to me. I make people talk.’ He talked enough to let me know what was going on with the song.”

Staples says she spoke with a lot of the songwriters over the phone to discuss what she was looking for in terms of material. Their lyrics presented a challenge for her, but Staples says she wanted that. “I’ve been singing my message songs for years, and I have been bringing people bad news,” she says with a laugh. “At the same time, I wanted to be uplifting them by telling them certain things that were happening. My father [Pops Staples] would tell the songwriters, ‘If you want to a write a song for the Staple Singers, read the headlines. We want to sing about what’s happening in the world today. If it’s something going wrong, we want to sing a song that could hopefully fix it.'”

The songwriters answered Staples’ request with several hopeful numbers, such as the bouncy-sounding “Tomorrow,” co-written by Aloe Blacc and Jon Batiste. “The theme in “Tomorrow” is all about optimism that the future will be better than yesterday and today,” says Blacc. “I think the recording sounds awesome, and it’s an honor to have Mavis Staples singing our composition. Her voice and performance is the right fit for the song and I’m very happy with the result.”

Another track that falls in a similar thematic vein is Ben Harper’s “Love and Trust,” which was given a bluesy treatment by Staples. “Writing for Ms. Staples is a songwriter’s dream come true,” Harper says. “I went to the slide guitar, thought of her, and the song poured out like it had been waiting there, as if her voice were in my ear, like she was standing in the room. My reaction to hearing the song back for the first time was, ‘Yes, yes! Get me the rest of the record ASAP!'”

There’s also the elegant ballad “If It’s a Light,” written by the Head and the Heart’s Charity Rose Thielen, which was originally considered for her own band’s most recent album, Let’s Be Still. “As soon as I got off the phone with Mavis, I started shaking and burst into tears — invigorated and excited ones — because I knew that ‘If It’s a Light’ was the song,” says Thielen. “It was a song that I needed to write, not for me, but for Mavis. Pocketing her words, her thoughts, her aura, I went back to the table to rewrite lyrics and pre-chorus melodies, and thus, recorded a new demo version of the song to send to her and M. Ward. It was a new style of arranging for me, but totally provided for that old soul track vibe.”

Benjamin Booker, composer of the buoyant “Take Us Back,” says that Staples was what he exactly needed at that point in his life. “I was touring and felt very scattered,” he recalls, “and here was this very sweet person telling me that she was focusing on loving life and the people around her. The song is uplifting because Mavis does that to people. I have heard the finished version of the song and it was one of the most surreal experiences of my life.”

While the material on Livin’ on a High Note draws on the personal and spiritual, there are a few tracks that harken back to the Staple Singers’ protest songs. For instance, Tune-Yards’ Merrill Garbus wrote the empowering “Action,” which was a result of a phone conversation she had with Staples about Pharrell’s hit “Happy” and the police violence in Oakland where Garbus is based. “I like what Neko Case said: ‘I don’t want to be another white American translating African-American experience and giving it back to people. … That’s not what the world needs,'” says Garbus. “But the defense of civil rights is the responsibility of all of us in this country. I took inspiration from dialogues I was seeing in the Black Lives Matter movement, words like ’emergency.’ Songwriting often feels flaccid and ineffective in terms of social change, but I also believe in the power of songs to propel people into action.” 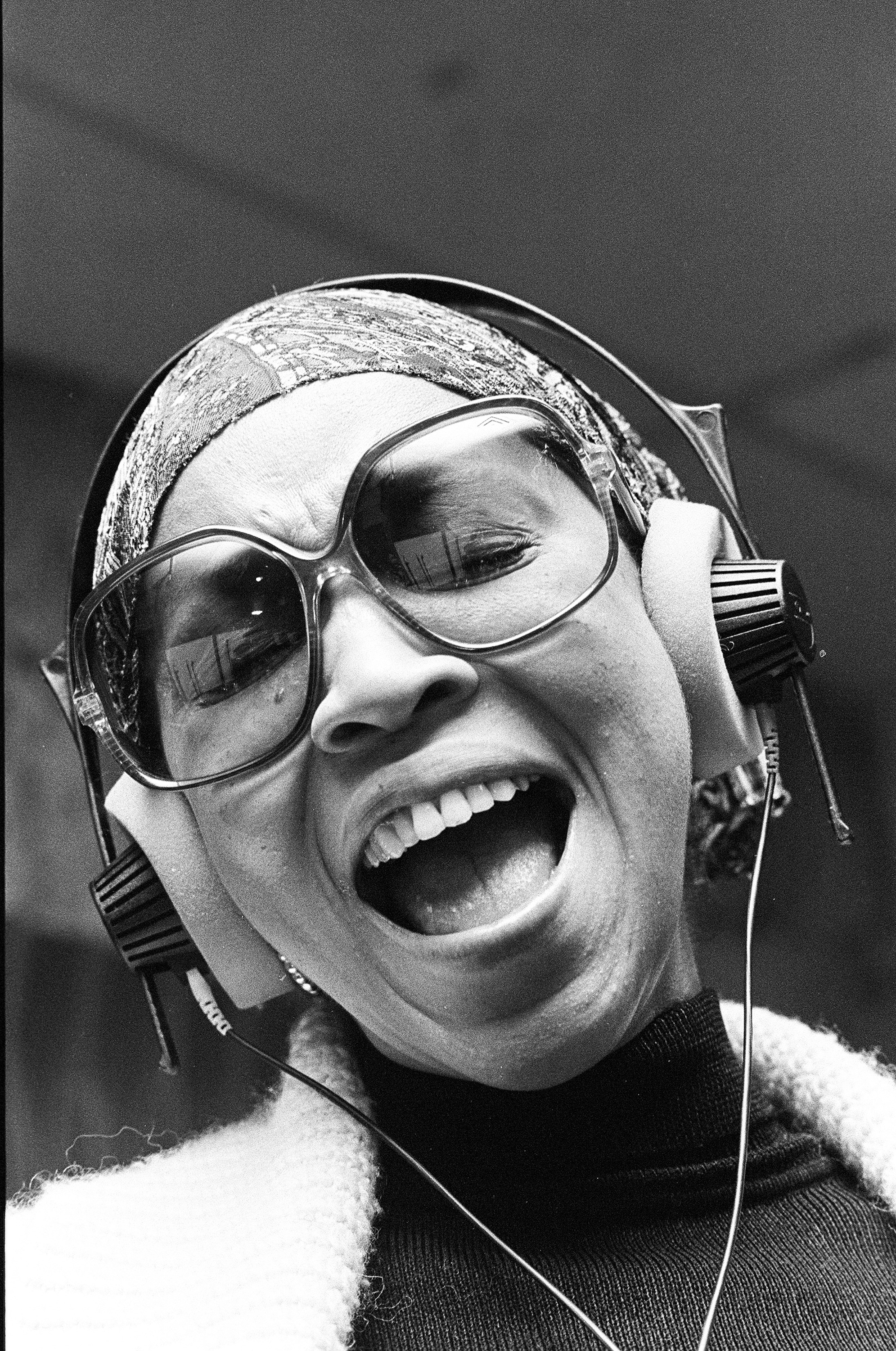 Equally reflective about the current times is the stirring “History, Now,” co-written by Neko Case, Laura Veirs and Donny Gerrard. “Mavis is a major influence on me,” Case says. “I dug around and listened to many interviews with her about her relationship with the songs she sings. CBC’s q [radio show with host Shad] interviewed her last year and I was lucky enough to hear a rebroadcast when I was having the hardest time with the songwriting. It was like she was in the room reassuring me. She said, ‘Look at the headlines.’ Those two suggestions together made ‘History, Now.’ It killed me when I first heard a tiny piece. Tucker Martine sent me a snippet from his cell phone as he mixed it. I broke down in tears.”

Fittingly, the most poignant track on the record is “MLK Song,” which features words from Dr. Martin Luther King Jr.’s speech “The Drum Major Instinct” and music by M. Ward. It’s appropriate given the Staple Singers’ association with the late civil rights leader.

“I probably heard that speech so many times,” says Ward, who also composed “Don’t Cry” and co-wrote “Dedicated” with Justin Vernon for Staples’ record. “When I started to get into that speech, it just sounded like it should be turned into a song. I had some ideas on my four-track from years ago but I never finished it. So when I found out that I was going to work with Mavis, and I watched the Mavis! documentary, I just got a lightbulb that I really needed to go back into the basement and find this old song and finish it. To have Mavis Staples be the voice — I can’t say enough how meaningful the whole experience was. It felt like we were doing something really good.”

“I actually broke down,” Staples says of “MLK Song.” “I had to do a little crying on that song and stop the tape for a minute because Dr. King — I would just see him. And I remembered that speech so well.”

Staples’ renditions of these songs written by a younger generation of artists further add to her eclectic repertoire of gospel, R&B and pop (she also previously covered the music of rock artists such as Bob Dylan, the Band and Buffalo Springfield with the Staple Singers). “It’s gonna be new to people, I guess,” she explains. “But I’ve been singing everybody’s songs — Curtis Mayfield, Prince and even songs that I was singing with the family that weren’t protest songs,” she explains. “The songs are different — I told the songwriters I wanted something joyful. I guess it’s different from what I’d been singing for a long time.”

Coinciding with the release of the new album is the documentary, Mavis!, airing on HBO on February 29th, that traces Staples’ career and that of her family’s. “When Mavis goes out and performs now, she’s not an oldies act,” says Jessica Edwards, the director of the film. “Of course you’re gonna get ‘I’ll Take You There.’ But the music that she does now is as interesting, unique, and part of who she is currently as the stuff that [the Staple Singers] were doing for [the labels] Stax, Epic or Vee-Jay. I think that’s the mark of true artistry.”

At this stage in her long career, Staples says it’s the love of the music and her fans that still motivate her to perform. “Pops used to say, ‘Serve the people … and sing from your heart,'” she says. “‘What comes from the heart reaches the heart.’ Every time I come out of that dressing room, I go to my heart. I’ve been really blessed. I’ve always said, ‘As long as I have my voice, I’ll sing.'”