When Martha sat down to write one of their trademark bruised-heart anthems for their next album, they wanted to think of a scene that’d illustrate their tale of “someone,” as drummer Nathan Stephens-Griffin puts it, “who’s going completely off the rails through heartbreak and has just gone off and is really losing themself and making enemies.” The solution? In the song’s second verse, the protagonist, drunk and “coping with the blues,” causes a scene at a wedding, knocking over an elderly woman after moshing to Huey Lewis and the News.

That song, which ended up serving as the title track to Martha’s thrilling third album, Love Keeps Kicking, is just one example of the type of quirky, endearingly specific songs that have made the Northern England band — comprising Stephens-Griffin, his sister, bassist Naomi Griffin, and guitarists Daniel Ellis and JC Cairns — one of the most singular voices in indie punk.

“The stuff we’re into is always idiosyncratic,” says Stephens-Griffin. “Even though I would love to think that we could write…what’s he called? Ginger lad?” 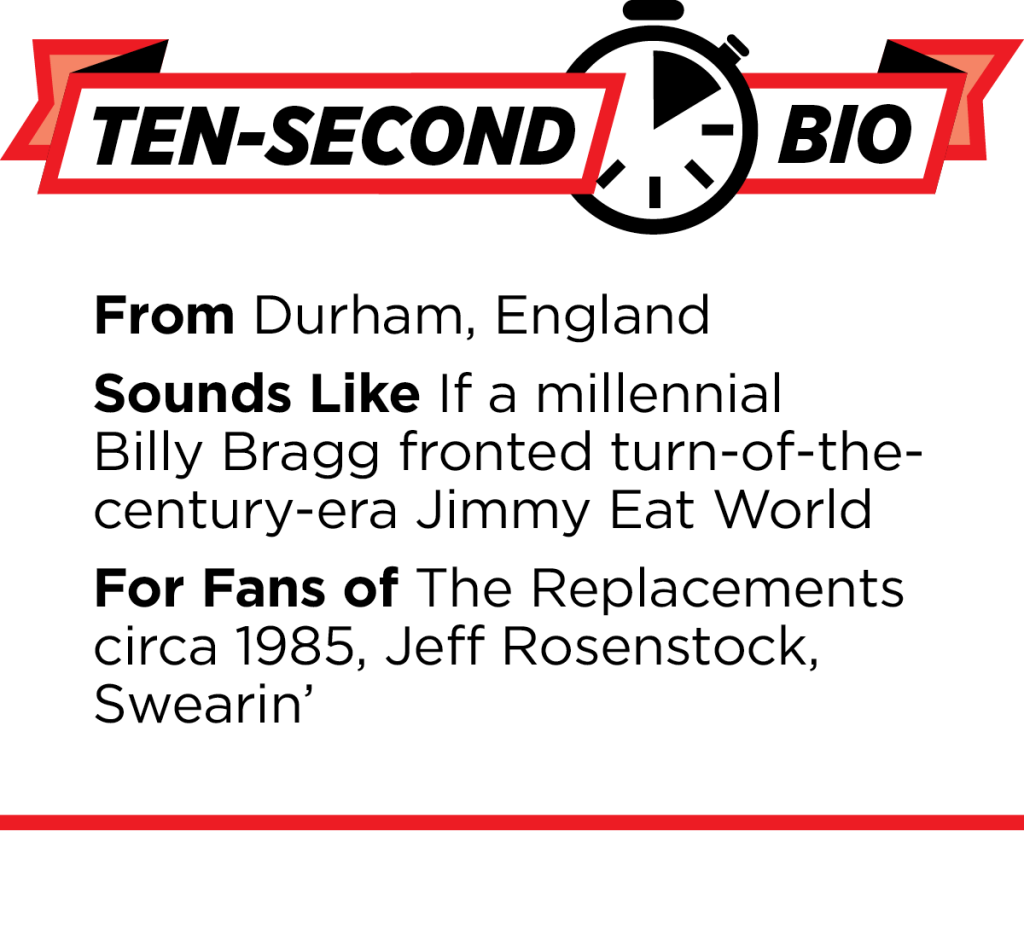 “Ed Sheeran? How do you not know that?” responds Naomi.

Las Sombras Are the New Vanguard of Argentine Rock

“Yeah, Ed Sheeran,” says Stephens-Griffin. “I’d love to think we could write very popular and broad pop songs, but the thing is, you want something in the song that gives it character and puts it in a place and a time.”

Few bands in the past decade have done that quite as effectively than Martha, who’ve been labelled, somewhat ironically but not inaccurately, “the world’s best straight-edge, vegan, anarchist rock band.” In Martha’s music, scream-along one-liners like “an existential mixtape on repeat until I die” coexist alongside far-flung pop culture mentions (the Replacements, poet Frank O’Hara, the Disney classic Sleeping Beauty), nerdy namedrops (non-Euclidean geometry, the 8th-century monk St. Bede) and casual references to coastal erosion and influential anarchist writers Emma Goldman and Voltairine de Cleyre. A song on their new album, “Wrestlemania VIII,” rewrites the chorus to Blink 182’s “First Date” and mentions Maya Angelou and Rowdy Roddy Piper in the very same line.

“The characters in our songs are us,” says Stephens-Griffin. “Well, they’re not us, but they’re people like us. We often sing about outsiders, people who kind of feel like they don’t fit in, but not in a romantic way. It’s a much more mundane form of not fitting in.”

Martha hail from Pity Me, England, a tiny village within the Northern England city of Durham. Naomi and Nathan grew up in a musical household, with their father playing in pub bands. “Our dad could really shred,” says Nathan. Daniel was a childhood friend, and they met JC through the Durham hardcore scene that they became active in as teens. Growing up, the band absorbed everything from nü-metal to indie (the Housemartins) to pop rock (the Beautiful South) before settling on punk. “The first thing I learned on guitar was Enema of the State,” says Ellis. “When I started learning bass I tried to learn Blink 182,” adds Naomi, “but it was too hard, so I moved to Jimmy Eat World.”

Today, the foursome — all of whom, aside from Nathan, live together — juggle band duties with assorted day jobs as teachers, librarians and tour managers. “There is a niceness to the band not being everything you do,” says Naomi, “it is a creative outlet, but there’s also a limit to that.”

“We wish the balance was like, 30 percent more Martha,” adds Nathan.

In contrast to the acoustic-leaning, overtly political songwriting of Onsind, a band most of the members of Martha also play in, the music of Martha dresses narratives about mental health, gender and failed twentysomething romance in a cheery, relentlessly catchy blend of melodic punk and power-pop.

So when the group suddenly found themselves with what they describe as the most downtrodden collection of songs they’ve ever made for Love Keeps Kicking, they briefly hesitated. “It’s a bit scary when you’re a band that’s, in a very small circle, had this reputation for being this ebullient, energetic, happy band to then do an album that is a bit more somber,” says Nathan.

“I would love to think that we could write [like]…what’s he called? Ginger lad?” “Ed Sheeran?”

The band made a concerted effort to explore new emotional and thematic territory on their third record. At one point, they had a conversation about how they wanted to a take a break from singing about anxiety, a topic addressed on past songs like 2016’s “Do Whatever” and “Do Nothing.” “We don’t want to sing about the same things all the time,” says Naomi.

One of the album’s centerpieces is “Orange Juice,” a mournful, Weakerthans-inspired folk-rocker that the group considers their first-ever proper breakup song. “It does certainly draw from real experience,” Nathan says. But despite the newly somber tone of Love Keeps Kicking, songs like “Into This” and “Sight For Sore Eyes” are some of the band’s most hook-heavy should-be-hits to date.

Perhaps the most archetypal new Martha tune is “Mini Was a Preteen Arsonist,” a saga based on a local Durham figure whose self-explanatory title is a nod to Against Me!’s 2010 classic “I Was a Teenage Anarchist.”

“It’s essentially about a kid who is troubled for very valid reasons, and there are social dimensions to what’s making him act up that are completely ignored, and he’s institutionalized and criminalized,” Nathan says.

Like many of their best songs, “Mini” subtly infuses the band’s far-left politics into their storytelling. Martha’s pop politics have drawn them admirers like Billy Bragg, who invited the band to play his curated activist-themed stage at 2015’s Glastonbury. The band sees any politics reflected in their music simply as an extension of the world they’re creating in their narratives. “The kinds of stories that we end up telling are ones that grip us because they’re linked to or reflect something that we’re passionate about or are thinking a lot about,” says Naomi.

“One of the first things that drew me to Martha is that they have a perfect way of mixing politics and pop songwriting,” says Sam Cook-Parrott, lead singer of the Philadelphia band Radiator Hospital, which has toured with Martha. “That’s really hard to do. A lot of times it just comes off heavy-handed or awkward, but they effortlessly write really catchy, fun pop songs that are super thoughtful and have a lot of important things to say.”

Remembering one of the first times he hung out with the band in England, Cook-Parrott tells a story that, in its mix of off-kilter oddness and heartwarming decency, almost sounds like the premise for a classic Martha song. “We were on the beach in Brighton, and there was this pigeon that had fucked up its wing and couldn’t fly, and we had to get to the show,” he says. “I would have written it off as like, ‘Damn, that sucks, that bird is going to die, probably.’ But Naomi saw this bird, picked it up, brought it to this animal hospital, and saved it. The bird lived.”