When Marcus King was 15, he talked his way into the Asheville, North Carolina, club the Orange Peel to slip a demo to Allman Brothers guitarist Warren Haynes — and nearly got himself arrested.

“I snuck in with the caterers,” says King. “Now the owner and I are good friends, but at the time he wanted to throw me in jail.”

That was seven years ago. These days, the 22-year-old guitarist doesn’t have to do much sneaking around concert stages: King has established himself as an electrifying performer, especially in the jam-rock world, where his slippery guitar style and soulful singing voice have made him a regular draw on the festival circuit. His lived-in vocals drive Carolina Confessions, the ambitious new album from the six-piece band that bears his name. His second LP for Fantasy Records, and third overall, the record finds King channeling the premier talents of the Allmans, singing in Gregg’s husky timbre and playing his instrument with all the verve of Duane. 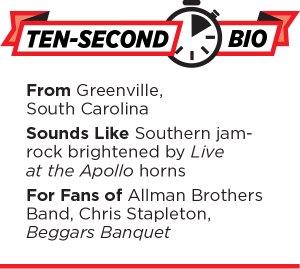 Not long after that night at the Orange Peel, King got his songs to Haynes through some mutual friends and earned himself a champion, one who recognized the innate talent in the Greenville, South Carolina, native. “He had a maturity musically speaking beyond what you usually hear in people that age, especially from a vocal standpoint,” says Haynes. “For someone that young to have a voice that instantly hits you like that is very rare.”

Being mentored by Haynes was surreal for King, whose father is bluesman Marvin King. “My dad’s a guitar player, so I was always really influenced by a guitar-driven sound,” he says. “Separately, I was influenced by frontmen and women, like Janis Joplin and Aretha Franklin. Miles Davis, Coltrane, James Brown. People with attitude, man.”

King doesn’t just pay lip service to those R&B and jazz greats. He fleshes out his band’s Southern-rock sound with a dynamite horn section made up of trumpeter Justin Johnson and saxophonist Dean Mitchell, who transform Carolina Confessions tracks “Side Door” and “How Long” into pulsing danceable jams. The record also nods to classic rock, evoking the horn-powered strut of the Rolling Stones’ Exile on Main Street and, in the specific case of lead track “Where I’m Headed,” Beggars Banquet‘s “Salt of the Earth.”

“From James Brown, I started getting into Chicago and then Blood, Sweat & Tears, these horn-driven bands,” says King. “And Otis Redding. My god.”

King brought his full cast of players with him to Nashville, where he’ll relocate permanently this winter, to record Carolina Confessions with Dave Cobb at historic RCA Studio A. The producer — who’s worked with Chris Stapleton, Jason Isbell, John Prine and many more — was first introduced to King via an electrifying YouTube video of him performing solo as a teen.

“I wanted to track him down and work with him. You can tell he was born with it,” says Cobb. “But he also developed who he is and made his own path. Southern rock is as important to him as soul music. American music is very important to him. It’s an amalgamation of Southern music as a whole.”

King probes the darker corners of the American experience in the album standout “Welcome ‘Round Here,” an ominous dirge that builds to a frenetic guitar-solo finish. King was inspired to write the song, which looks at divisiveness among families, especially between parents and children, in the days following the Trump administration’s travel ban. “Boy, you ain’t welcome ’round these parts no more,” growls King. “Boy, you better take yourself back home.”

“It is my feeling that we should never turn anybody away,” he says. “But it’s also about me living in the South, seeing kids leave their home and finding out who they are. Then they come home and it’s an awful thing to see a family not accept their children. That song is written from the perspective of a close-minded individual.”

“You can hear that he’s listened to a lot of music. He’s not just a product of the past 10 or 20 years,” says Haynes. “He’s opened himself to a lot of influences and it all makes him play great.”

Still, the soft-spoken King is reluctant to accept any praise. While he’s a self-described “Allman Brothers freak,” he quickly brushes aside the notion that he and his versatile band are heirs to the Allmans’ country/jam-rock mantle.

“That’s a tremendous weight to bear,” he says. “There are a lot of cats out there, Tedeschi Trucks being one of them, helping carry this thing on. Stapleton, Jason Isbell, Sturgill Simpson. A lot of people are bridging that gap between country music and rock & roll music. We’re trying to do the same thing and not be confined to one particular genre. The jam community gives a home to all of these artists.”