Solange’s When I Get Home, released on Friday, feels both meticulous and off-the-cuff, hyper-melodic for those listeners enticed by the Seventies references on 2016’s A Seat at the Table, but also attuned to the short track-lengths and loop structures favored by today’s young streamers.

Solange oversaw the making of the album with scrupulous care, starting in Houston and then continuing later in sessions in Los Angeles and Jamaica. “The best [approach] for me is to invite people into the space and say ‘do you,'” the star explained during a Houston album-release event that was live-streamed by Apple Music. “It could be six hours before I hear the one ad-lib or the one thing where I think, ‘OK, that is how I can extend this into an expression of what I want to achieve.'”

As she has proved on previous albums, Solange is adept at identifying unexpected collaborators and uniting them in service of her vision. Two of her allies on When I Get Home are Christophe Chassol, a classically trained pianist with pop-world credits for Phoenix and Frank Ocean, and Jamire Williams, who has played with jazz acts like Kenny Garrett and Christian Scott in addition to indie singers like Dev Hynes and Moses Sumney. The two spoke about recording with Solange in Los Angeles and the stew of influences that seeped into When I Get Home.

“We were just at the top of this hill, and we’re amongst friends, trying to outdo each other in friendly competition, almost like it’s camp,” Williams recalls. “It reminded me of what I always dreamed making a record would be.”

How did you first meet Solange?
Chassol: She invited me to open for her at Radio City Music Hall in 2017. And then for a show at the Greek theater in Oakland. In January 2018, I did a concert in New York. Then she called: Can you come to L.A.? I live in Paris, but I was in the States already, so I said yeah, of course. She rented a house in L.A. but in the hills, very far away, so you could see the whole town in 360 degrees. A crazy house. She had a big carpet, a Fender Rhodes, drums.

Williams: I’ve been knowing Solange probably since I was 13. We grew up together in Houston and went to junior high together. We’ve been homies for years. We kept in touch over the years.

I did a solo drum record maybe at the end of 2016, and after I put that out I was doing solo performances and concept shows. She was really into that, I opened for her a couple times with that. Then with Chassol we opened a couple shows for her too. We started talking a lot, and after a two-year build-up, once she started really recording, she brought me into the fold.

What was the songwriting process like in Los Angeles?
Chassol: We work, we play, we eat, we talk a lot, two or three hours, then we play, then we record, then we sleep. She wanted to make a statement. She’s very concerned about the community. We talked about me being black French, and her being a black woman in the industry since she was a kid. It’s very different to be a black classical musician — I was raised in classical. I don’t have to do black music. We talked about that.

It’s a good process for four or five days. Working with Frank Ocean was kind of the same process — but later at night. She has a kid, so it’s not like we last until nine in the morning like with Frank. But she’s very impressive the way she works. She knows what she wants. Her voice is a very powerful instrument. She knows how to record, cut, edit, build layers. 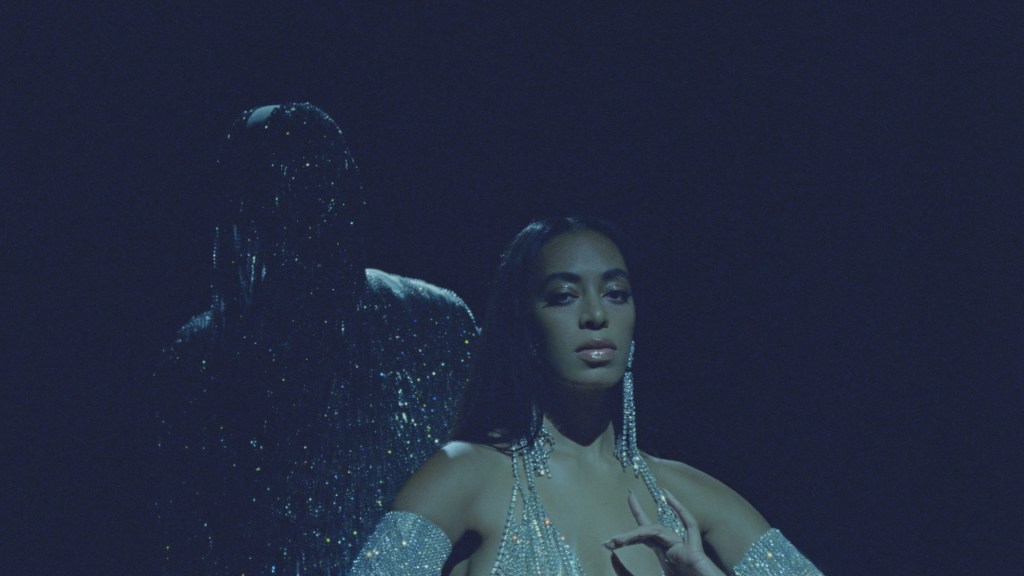 Williams: Solange always has a vision, a grasp of where she wants to take things. She had an inspiration, mood-board type of playlist. When I came in, several things were already recorded. I want to say “Way to the Show” was already pretty much the way it is now. So were some other things, some pseudo-interludes. [Those showed me:] This is where we want to go sonically.

The big thing was the reference to Houston: How we grew up, the things we were exposed to during our adolescence. I think that’s one of the reasons why I was brought in too. She knew I could instantly connect to that culture, to that aesthetic. There wouldn’t be a lot of talking that needed to be done about that. Like [veteran Houston rapper] Devin the Dude, who’s featured on the one of the joints, I co-produced, “Dreams,” he’s a Houston staple favorite. Anyone from Houston is going to be a Devin the Dude fan. He’s a silent assassin, an underdog that doesn’t get the credit he deserves. We also listened to early Destiny’s Child, b-sides and remixes.

Solange Releases 'When I Get Home' Album

Then there was Stevie [Wonder], Journey Through the Secret Life of Plants, that was always in the air. Even before [the L.A. sessions], during our shows, that was the stuff that was being played before anyone went on stage. The story got back to us that Stevie didn’t even think too much of that record. But for us weirdos, musician nerds, it’s a slept-on record — the musicality of it, the minimalism of it even though it still has such a presence, the vulnerability.

We would just let things roll, and different people came through — Steve Lacy some days, Tyler [the Creator]. It was like a compound during the L.A. sessions. You didn’t know what day it was.

Did you go into the sessions with ideas for specific songs?
Williams: We were jamming a lot the first couple days. That’s the beauty of having time to record, not being pressured. You can let a moment happen. Once you find it, you revisit things, start to shape them. Then we pulled files back up to see which ones stuck, had clear-cut ideas. When Solange is writing, she’s just flowing. She always has a live mic recording as we’re recording. It was very basement-style. We wanted the rawness of the demos, but enough polish for it to knock on any system.

Chassol: After two or three days I started to isolate myself down in the house and do other stuff. I did an interview with her about her life, personal stuff. She told me about when her parents met, how she grew up. We recorded that. Then I took some time to harmonize what she said.

You’re famous for this, but can you explain it again?
Chassol: My whole work is based on speech harmonization. It’s an old musical technique. You find the note for each syllable you pronounce. Then you make melodies with it, make loops and put chords to it. Then you have a song. The album starts like this. “Things I Imagined” and a few other tracks like that. We did much more, but she found a balance when putting the songs on the album.

Why does speech harmonization appeal to Solange?
Chassol: It’s an old technique. It comes from Bela Bartok, he was using it in the 1920s. People like Steve Reich used it. He used it in 1988 for Different Trains, a piece about the Holocaust: People say dates and places, and everything is harmonized. Solange is very curious. I was impressed by her curiosity — finding people like me that are not famous is proof of that.

The interview is a good way to get something spontaneous. I’m talking to you, really normally, not thinking about the music, but there is music in what I’m telling you. Then you work on the spontaneous thing and make it sophisticated. Then you have both sides of expression: Spontaneous and sophisticated. That’s what everybody wants, no?

I was impressed by some of the tracks on the previous album. Since she asked us to open for her, I caught her show a few times. She captures the essence of black music. Some tracks, like “Cranes in the Sky,” [He sings bass part], that’s a turn-around in jazz, a small pattern, she knows that, knows that culture. We were talking about that: How can you encapsulate one fragment of the essence of that music? Jazz, funk, classical music is also black in a way. Does that make sense?

The new album seems to have a very different approach to capturing that compared to her last one.
Chassol: Do you know D’Angelo’s Voodoo? It was such a turning point in the history of black music. Everything changed with that album. I hope for her this will do the same. I think she’s going in the direction of trying to change, trying to inflect things.

Solange captured what is left of trap music; she understands what’s going on. You can hear the modern hi-hats. And you can hear like, a pool of bass. She’s taking this, and at the same time she’s putting in stuff from the Seventies — Herbie [Hancock], Harvey Mason [who drummed with Hancock and others]. And she’s using me.

Williams: I just remember in the L.A. sessions when Christophe [Chassol] was there, there was one point where he was downstairs in the house, and we were upstairs in another side of the house. Christophe had recorded Solange talking, and he did his Chassol thing. And we came down, and what you hear on “Things I Imagined” is a flip from a conversation of her talking. [Editor’s note: “Things I Imagined” was actually built from Solange a capellas, not her speaking voice.] And we were just like, holy shit, that’s crazy. Then we went upstairs and kept working and kind of came up with what you hear on “My Skin My Logo” — me, Steve Lacy, John Key. It was a beautiful time.

When we were out in Jamaica, it was me, Dev [Hynes], John Key — a multi-instrumentalist from New Orleans, and the drummer in her touring band for A Seat at the Table — with Solange. Once we got to Jamaica, it was more shaping and editing things. When you’re jamming, stuff can be 10 – 20 minutes long. And you think it’s all great! But you can’t put all that on a record like that.

In Jamaica, there were already 20+ things on the board: “These are the ones that I want to make the record.” But she was saying, “I can’t put 25 songs on this.” And more sessions were going to happen. So we had to cut it down.

There were other sessions after the Jamaica sessions. When we were in Jamaica, she had stuff locked in with Pharrell. They did a bunch of stuff — “Almeda” came out of those sessions.

Chassol: I didn’t know what she would do with what I did with her, but she used it with perfection. People think she’s like, a pop star. But she’s really down to earth. She’s not forced to make a hit. She doesn’t have to. That’s freedom.