“‘Is jazz dead?’ is a stupid question,” says drummer and bandleader Makaya McCraven over beers at a Lower East Side bar that is, fittingly, playing a selection of 1930s and ’40s-era jazz cuts. “If you have to ask the same question for 50 years, it becomes a rhetorical question. When did it die?”

Those who know McCraven’s work would likely reach a similar conclusion. Critically acclaimed releases like In the Moment (2015) and Highly Rare (2017) — both made up entirely of live material — put the heat and vitality of an intimate jazz club into a distinctly 21st century mode of brainy beat music, edited down to their searching, abstract highlights. They gave McCraven the kind of jazz-vanguard cred also recently assigned to artists like Robert Glasper, Kamasi Washington and Shabaka Hutchings, all of whom have earned some degree of crossover success over the past decade thanks in part to their ability to tap into hip-hop and R&B audiences. Despite the fact that these artists emerged at different times and with different aesthetics, each has been presented as the face of a jazz “revival” or “resurgence” — a necessary spark to an otherwise moribund genre. But McCraven, 35, would prefer that listeners don’t call it a comeback.

“It’s like, gag me,” he says of the idea that jazz needs saving. Part of the inspiration behind his latest album, Universal Beings (due out October 26th on International Anthem) was the music’s current vitality. McCraven recorded the project with four different ensembles, in four different cities: New York, Los Angeles, London and Chicago, his adopted hometown. 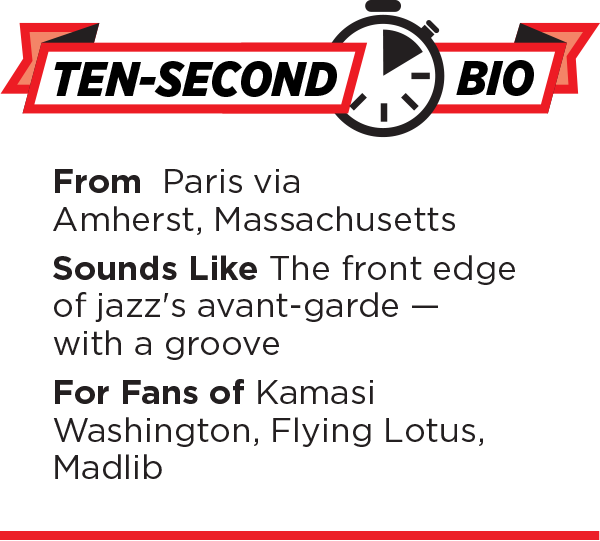 “It’s not ‘West Coast Is the Best Coast,’ not ‘London Is the Face of Jazz To Come,’ not ‘New York Is the Only Place Jazz Lives in America,'” he says, listing imagined trend-piece headlines that aren’t too far off from the real thing. “The story for me is that each of these places have really cool local scenes that cultivate their own sound and their own thing — yet we’re part of a global music movement that’s getting a lot of traction right now, and that’s super exciting. I wanted to shine a light on that. Plus, it doesn’t hurt to get a bunch of cool people on your record.”

In many ways, global jazz culture is the story of McCraven’s life. His father, jazz drummer Stephen McCraven — a Connecticut native who was mentored by avant-gardists Marion Brown, Archie Shepp, Yusef Lateef and Sam Rivers — and his mother, Hungarian folk singer Ágnes Zsigmondi, met in Paris, where McCraven was born. The family later moved to Amherst, Massachusetts, finding an intimate artistic community in the college town.

McCraven says that growing up with working musicians as parents gave him a realistic perspective on just how hard it is to make a living in the industry, but also made it nearly impossible for him to consider doing anything else. A turning point came during his senior year in high school: He was already making inroads on the local music scene with his jazz/hip-hop band, Cold Duck Complex, but he was also co-captain of the football team, and some Division II and III schools had come calling. “One Friday night, my fingers got smashed between facemasks,” he recalls. “My first thought was about how I might not be able to play a big gig that my band had that weekend — that’s when I knew.”

So he stuck around Amherst and enrolled at the University of Massachusetts in 2002. A self-described big fish in a small pond, he found steady gigs as both a drummer in other people’s groups and with his own band — so steady that he dropped out of school. Today, he’s still skeptical of jazz’s conservatory pipeline. “I was just listening to Kind of Blue, and half the songs just trail off at the end,” says McCraven. “That’s the stuff you would get an F for in jazz school, but it’s brilliant! I want to study the musicians before me, but I want to study what they thought and felt and why they did what they did — not what notes they played.”

His on-the-job training continued in the mid-aughts when his wife got a tenure-track position at Northwestern (she’s now a professor of Asian- and African-American Studies), and he started commuting between Chicago and gigs on the East Coast. Suddenly he had to learn a new local scene, which he first fell in love with at a now-defunct weekly jam session at the city’s Velvet Lounge. The bar was owned by saxophonist Fred Anderson, a member of the pioneering black art-music collective the Association for the Advancement of Creative Musicians, and the jam session, where McCraven quickly became a regular, was transformative. “I got there and met young black musicians that had a reference for the avant-garde but also knew hip-hop — and they were playing completely straight-ahead jazz,” he says now. “I was just like, ‘These are my people.'”

McCraven found an abundance of work in his new hometown. “Between brunch gigs, weddings and corporate gigs, Chicago is the best city in america for working jazz musicians,” he explains. After playing one to three gigs each day, he’d go home to work on increasingly experimental music on his off hours.

Listening to Madlib and Flying Lotus, McCraven saw the enthusiasm that young hip-hop fans had for what he calls more “challenging” music. “Maybe music doesn’t need to be watered down to be accessible,” he recalls thinking. “Maybe you can be provocative, and that actually gives you more of an opportunity to move people.” And when the founders of the then-nascent local label International Anthem suggested he host a weekly improvised gig and record all of it, he realized that all that raw tape could easily become source material. McCraven started editing down and overdubbing the live sessions, marrying jazz’s spontaneity and electronic music’s polish.

“You’re supposed to know that I’m doing it — the editing is part of the narrative,” he says. “It’s a recontextualization of avant-garde concepts in jazz music, making them more digestible and palatable to a broader amount of people.” Those weekly sessions became In The Moment; a live gig recorded to four-track tape at Chicago dive Danny’s Tavern a few weeks after Donald Trump was elected president became the taut Highly Rare. Both feel urgent and fresh in part because you can hear the rooms they were recorded in. They present jazz as a way to facilitate community as much as individual expression.

That same technique and ethos drives Universal Beings, all recorded either live or in impromptu studios and then edited down by McCraven. His priority, he says, is making music that’s honest, vulnerable, and challenging — “socially challenging, not technically challenging.” There are women musicians on every song on the album, a decision that McCraven says was “absolutely intentional.”

The album is organized into four suites, divided by location, forming a portrait of contemporary jazz through McCraven’s lens with help from collaborators like Hutchings, guitarist Jeff Parker, bassist Dezron Douglas and many more. The guiding principle is the power of live music, or as McCraven puts it, getting people in the room: first aurally, and then physically, whether it’s in L.A. or Chicago or London or somewhere else.

“Being in a room where the music is amazing, the hair stands up on the back of your neck, people are hooting and hollering — that’s magic,” McCraven says. “No wrong note is going to change that feeling, so I want to see you show some skin. If you’re taking some risks, people respond to that. That first moment when everything comes together — when that hush falls in the room, and it feels like time is moving at a different pace — there’s something else in the space. I don’t know what it is, but there’s something there that’s real.”