The year leading up to the release of the Magical Mystery Tour album in November 1967 was turbulent but fantastically fertile for the Beatles – they were working on its songs more or less simultaneously with the ones that ended up on Sgt. Pepper’s Lonely Hearts Club Band and the Yellow Submarine soundtrack. With touring no longer a question, they had the luxury of fine-tuning their songs at length in the studio; the same band that had recorded its first album in a single day was now tinkering with individual recordings for weeks on end.

If Sgt. Pepper was a blueprint for the Beatles’ new utopianism – a culture of vivid sensory experience, for which they could be the entertainers and court jesters – the Magical Mystery Tour project was an attempt to literally take that idea into the world. Paul McCartney’s concept was that the Beatles would drive around the British countryside with their friends, film the result and shape that into a movie over which they would have total creative control. But like a lot of Sixties attempts to turn utopian theory into practice, the movie fell on its nose: The Beatles simply weren’t filmmakers.

The Beatles' 'Sgt. Pepper': The Story Behind Every Song

“You gotta do everything with a point or an aim, but we tried this one without anything – with no point and no aim,” McCartney admitted the day after it premiered. The Magical Mystery Tour soundtrack, on the other hand, did what the movie was supposed to do – despite being a grab bag of the group’s 1967 singles and songs recorded specifically for the film, it holds together surprisingly well as an addendum to Pepper, giving us an image of the psychedelic Beatles refining their enhanced perceptions into individual pop songs so potent that they changed the whole landscape of music.

The songs that would end up on Magical Mystery Tour began taking shape in late 1966, well before McCartney was struck by his cinematic vision. From November 24th, 1966, to mid-January 1967, the Beatles worked extensively on a pair of new songs, intended for what would become Sgt. Pepper: John Lennon’s “Strawberry Fields Forever” and McCartney’s “Penny Lane,” both reminiscences of the Liverpool of their childhood. By the end of January, though, EMI was demanding a new Beatles single – there hadn’t been one since “Yellow Submarine” the previous August, an impossibly long gap in those days. George Martin wasn’t happy about pulling “Penny Lane” and “”Strawberry Fields Forever” off the album-in-progress, but there wasn’t much else in the can. Released on February 17th, the single was a worldwide hit, and a statement of purpose for the rest of the Beatles’ recordings that year: reflective, druggy, a little nostalgic, and more inventively orchestrated and arranged than anything else around. 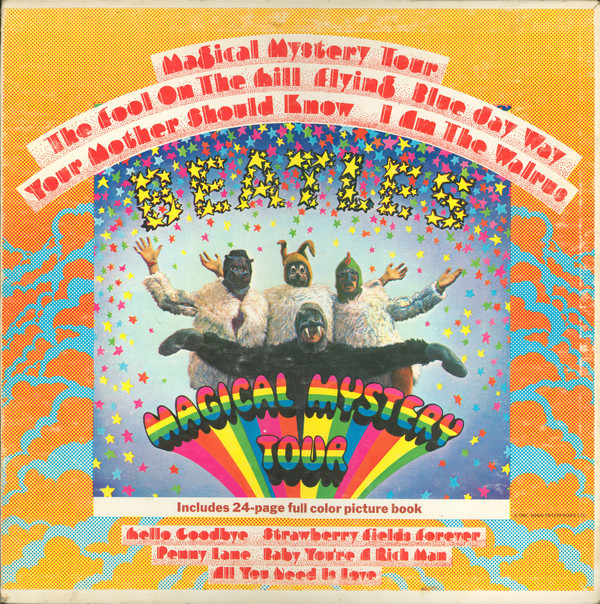 That spring, with Sgt. Pepper all but complete, McCartney visited California, hanging out with members of the Beach Boys and the Mamas and the Papas. Along the way, he got the idea for an hour-long movie that would document a free-form bus trip, a sort of British equivalent of Ken Kesey and the Merry Pranksters’ adventures in their bus, Further. McCartney drew a diagram of how the Magical Mystery Tour film would be structured, and wrote a theme song for it, which the Beatles recorded over a series of sessions in late April and early May.

The next song they tackled was Lennon’s “Baby, You’re a Rich Man,” a scathing portrait of a social arriviste that may or may not have been intended as a jab at manager Brian Epstein. Relations between the Beatles and Epstein had become slightly strained. When he turned up in the studio to announce that he’d booked them to debut a new song on the first-ever live global-satellite-transmitted TV special, Our World, they were nonplussed – he hadn’t asked them first if they were interested. Lennon agreed to come up with a song for the show, then promptly forgot about it; when he was reminded that the show was a couple of weeks away, as engineer Geoff Emerick recalled later, Lennon groaned, “Oh, God, is it that close? Well, then, I suppose I’d better write something.”

Our World aired on June 25th, 1967, three weeks and change after Sgt. Pepper had been released. The song Lennon had grudgingly slapped together to fulfill his obligation was another triumph: “All You Need Is Love,” the signature anthem of the Summer of Love. The Beatles performed it live on the air (with the help of a prerecorded backing track), accompanied by an enormous crowd of their cohorts, including Mick Jagger and Keith Richards of the Rolling Stones, on whose “We Love You” Lennon and McCartney had sung a month earlier. When “All You Need Is Love” was rush-released as a single, the flip side was “Baby, You’re a Rich Man.”

That’s about all they managed to do together over the month and a half following the Our World broadcast. Their relative lack of productivity wasn’t a sign of the internal unrest that would soon surface; they were still very much a unit, and did everything by consensus. “If three of us wanted to make a film, for instance, and the fourth didn’t think it was a good idea, we’d forget about it,” McCartney said at the time. In late July, Lennon, George Harrison and McCartney traveled to Greece with the idea of buying an island and building a commune and a recording studio there.

The reason for the artistic slowdown was simple: It was a beautiful summer – there were parties to go to and drugs to take, and Ringo Starr’s wife, Maureen, was very pregnant. Among those parties was a big bash at Epstein’s house; he’d asked the band to arrive early so they could discuss something important. But, as Harrison later recalled, “Everybody was just wacko. We were in our psychedelic motorcars with our permed hair, and we were permanently stoned … so we never had the meeting.”

The bandmates did do a little work, convening in late August to run through McCartney’s old-timey number “”Your Mother Should Know.” They also had an audience with the Transcendental Meditation guru Maharishi Mahesh Yogi, who would become a hugely important figure in their lives over the next year.

On August 27th, Brian Epstein was found dead of an accidental prescription-drug overdose. The Beatles had been drifting away from him for a while – his management contract with them was close to expiring, and it wasn’t clear whether they were going to renew it – but he’d directed the band’s business for close to six years, and had helped to transform the Beatles from a scruffy beat combo to an all-conquering cultural force.

“We loved him, and he was one of us,” Lennon said at the time. Epstein really had been a crucial part of their organization – the person whose business acumen gave them the freedom to concentrate on their music. The Beatles’ creative chemistry thrived on their differences as artists, but it was their business problems that would ultimately tear them apart a few years later. As Harrison later put it, “We didn’t know anything about our personal business and finances; he had taken care of everything, and it was chaos after that.”

A few days after Epstein’s death, the Beatles had reconvened to continue with Magical Mystery Tour, and not to look for a new manager. Between September 5th and 8th, they laid down three particularly tripped-out songs: Harrison’s blurry “Blue Jay Way” (inspired by his early-August trip to Los Angeles); the instrumental jam “Flying,” which was co-credited to all four Beatles; and most famously Lennon’s “I Am the Walrus,” a free-associative vision produced under the influence of Lucy in the sky with diamonds. “The first line was written on one acid trip one weekend, the second line on another acid trip the next weekend, and it was filled in after I met Yoko,” Lennon later said. 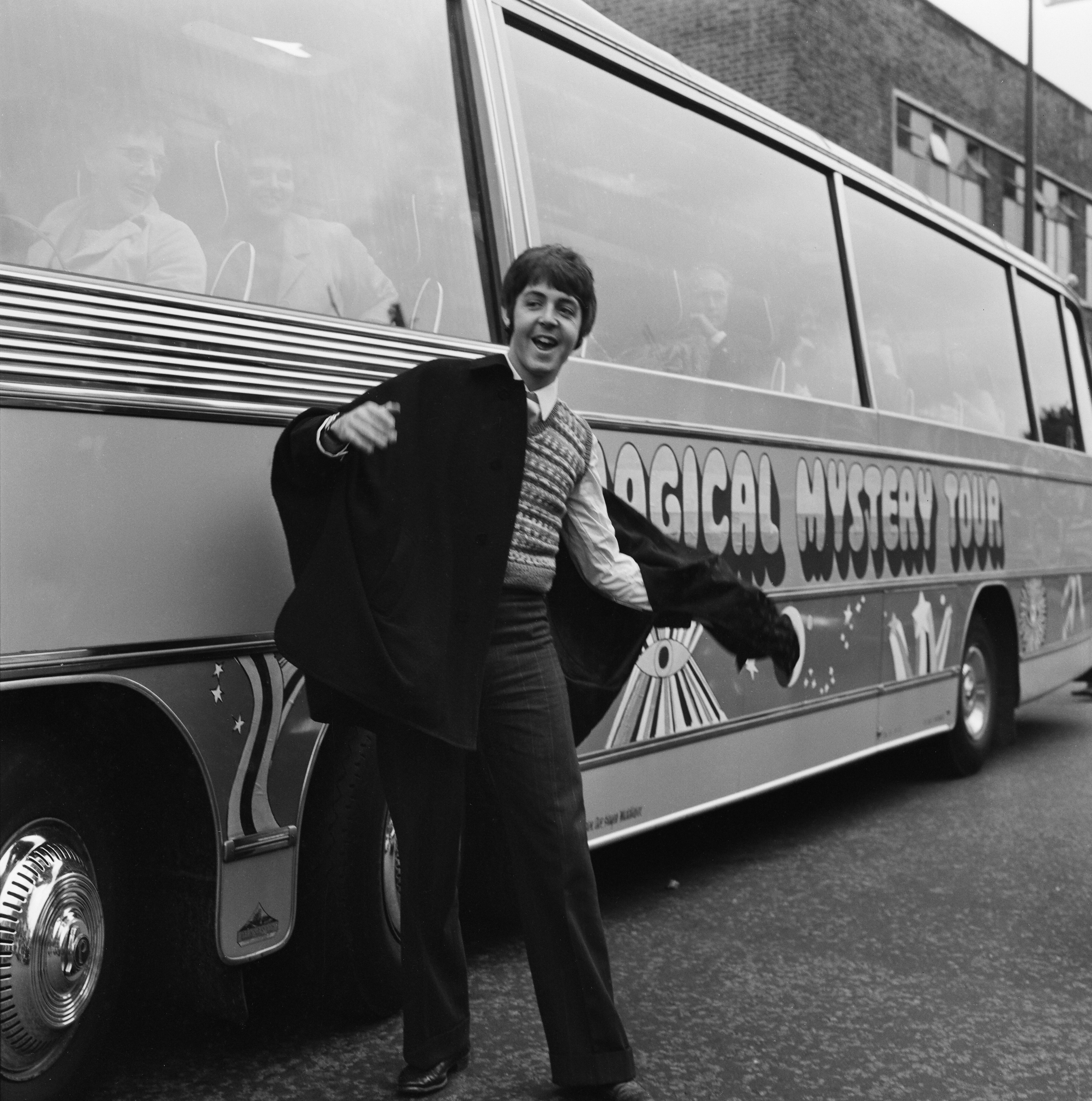 All three tracks were intended for the movie, which started principal photography the next week, without a script or anything more than a few stoned concepts. From September 11th to 15th, the psychedelic bus drove around the West Country, occasionally stopping to shoot whatever seemed like a good idea at the time. The Beatles ducked into EMI’s studios on the evening of the 16th to rerecord “Your Mother Should Know,” which they’d begun work on days before Epstein’s death; the next week, they shot more material for Magical Mystery Tour, including the Bonzo Dog Doo-Dah Band at a strip club, performing a song called “Death Cab for Cutie” (the song would later give rise to the rock band of the same name). As first-time directors, the Beatles figured it would probably take a week or so to edit their 10 hours of footage down to something usable.

It eventually took 11 weeks. The problem was partly that everyone had their own ideas about what should and shouldn’t be in the movie, and partly that they’d neglected to get some important material on film and had to go back to shoot it. Still, the band made it down to Abbey Road for a handful of sessions between September 25th and October 25th, completing the spacey trio of songs it had started in early September, and recording McCartney’s “The Fool on the Hill” and “Hello Goodbye” (the latter released on November 24th backed with “I Am the Walrus”).

The Magical Mystery Tour movie was finally broadcast on BBC television on December 26th, 1967, and became the first Beatles project to be an outright flop. (It didn’t help that the BBC aired it in black-and-white rather than color.) The reviews were savage. “They thought we were stepping out of our roles, you know,” Lennon groused a few months later. “They like to keep us in the cardboard suits they designed for us. Whatever image they have for themselves, they’re disappointed if we don’t fulfill that. And we never do, so there’s always a lot of disappointment.”

As an LP, Magical Mystery Tour was an unqualified triumph, sitting atop the American charts for eight weeks and eventually going sextuple-platinum. It extended and refined the Beatles’ version of psychedelia: a vision of the world that was essentially colorful, reflective and loving, but encompassed bad trips as well as good ones.