When Lucy Dacus was 13, she spent a summer at a Bible camp in her home state of Virginia. Looking back now, she remembers the sermons preaching abstinence, the “slightly erotic God-loving songs” at worship times, and the talent show where she performed Snow Patrol’s “Chasing Cars” backed by five male friends with acoustic guitars. Most of all, though, she remembers meeting her first boyfriend. “He was into Slayer, and he was a stoner, and I told him that if we dated, he would have to stop smoking weed,” Dacus, 26, recalls over Zoom from the house she now shares with six friends in Philadelphia. “I was a straight-laced, hardass, morally superior 13-year-old.”

She turned her recollections of that early-teenage romance into a song called “VBS” (short for “Vacation Bible School”), a highlight on Home Video, Dacus’ third album, out June 25th on Matador Records. The lyrics are tender, precise, and crushingly real: “Your poetry was so bad, it took a lot to not laugh,” she sings. “You said that I showed you the light/But all it did, in the end/Was make the dark feel darker than before.”

If Dacus’ past releases have delivered a few emotional knockout punches, this album is full of them. Nearly every song is based on a memory from ages seven to 17, depicted with writerly clarity over big-room indie-rock arrangements. “I’ve always valued honesty, but a lot of these are just note-for-note things that happened in my life,” she says. “They implicate specific people — some people who I care deeply about, and some people that I don’t talk to anymore. … There are people who could be mad. I could be getting some phone calls. My jaw is a little clenched about it.”

On “Christine,” Dacus counsels a close friend not to settle for an unworthy partner (“If you get married, I’d object/Throw my shoe at the altar and lose your respect”). She sent a demo to the song’s subject — “I was like, ‘I just need to say this once. It’s your life. But this is how I feel’” — and that same partner heard it and remarked, “Lucy is a good friend.”

On “Triple Dog Dare,” Dacus sings wistfully about another old friend, who perhaps could have been something more. “That was hard for me to write,” she says, “realizing that this friendship was complicated by being queer, but I wasn’t out to myself at the time. What would this have meant if I had been comfortable with myself? Would it have ended better or worse?”

The most intensely moving track on Home Video is “Thumbs” — a song with such potency that Dacus’ fans set up a Twitter profile under the name “Has Lucy released Thumbs yet?” after she began playing it on tour in 2018. It’s a hushed, nearly a cappella ballad about a night in 2014 when Dacus, still in college, met up with a friend and that friend’s no-good father. By the chorus, she is fantasizing about using her hands to murder the man: “I would kill him/If you let me.”

Dacus, who was adopted as a child, wrote the song a few years later, at a time when she was “dealing with some complicated issues with my birth father.” She drafted it all at once, filling a notepad with words that made her feel almost possessed, even a little scared by their power.

“It ends with those lines, ‘You don’t owe him shit/Even if he said you did,’” she says. “That’s me speaking to her, but I needed to hear that for myself.”

Not long after releasing her previous solo album, Historian, in 2018, Dacus joined up with like-minded singer-songwriters Phoebe Bridgers and Julien Baker for a widely acclaimed six-song EP as Boygenius. She credits their November 2018 tour for broadening her ambitions as a writer and helping to crystallize her resistance to being categorized as a “sad girl,” a label that she finds reductive to the point of disrespect. “We all have been spoken about in similar ways, and to rail against that together felt really good,” she says. “Like, ‘Let’s not just be sad — let’s be funny, let’s be loud, let’s be angry.’ It’s a myriad of emotions.”

It was only a month of shows, but the experience has stayed with Dacus. “It was life-changing, to say the least,” she says of performing with Boygenius. “That just broke me open, in terms of what I thought was possible for myself and my writing. Being around Phoebe and Julien, laughing more, making more jokes, expanded what I feel like I’m willing to do.”

The songs that she began writing during the solo tours that followed often emerged from deep within Dacus’ unconscious mind. “I can’t really write a song if I’m focusing on it,” she says. “It has to happen in the background. I feel like I’m a dummy, and there’s somebody else doing all the cool stuff — a little writer in my brain that’s doing its thing, and it does its very best to get my body’s attention in order to express it.”

Words came to her all over the world, in venues’ greenrooms or on the road. “I would leave whatever hotel room me and my band were sharing, and go into the van late at night and finish a song,” she adds. “It feels like being asleep, or that moment when you’re waking up and you remember your dream.”

By the early summer of 2019, Dacus had written most of Home Video. She had also blown out her throat after playing so many shows. “The doctor was like, ‘If you’re not silent for the next month, you’re going to need surgery,’” she recalls. After doing her best to balance that vow of silence with her existing commitments — including a memorable turn as one of the singers joining Dolly Parton on a special performance of “9 to 5” at that year’s Newport Folk Festival — Dacus headed to Nashville, where she recorded the majority of the new album that August.

Working with her longtime backing band in the same studio where they’d made her previous albums, and still trying to rest her voice for all but two hours of the day, Dacus found herself thinking more like a producer than ever before. She had largely avoided acoustic guitars on Historian and her 2016 debut, No Burden, because she didn’t want to be pigeonholed as “a twee singer-songwriter”; now she was more open to that texture, along with the possibilities of piano, an instrument that she associates with her mother. “People are so quick to call anybody with an acoustic guitar ‘folk/Americana,’ and I play rock music,” Dacus says. “But I wanted this record to be more nostalgic, more pretty. I wanted it to have the warmth that those instruments can provide.”

Other production choices on Home Video had more complex emotional resonance, like the Auto-Tune filter she used to distort her lead vocals for “Partner in Crime.” “It’s about admitting that when I was a teen, I would lie about my age to be more attractive to older guys,” she says. “That is, one, embarrassing; two, very common, and that in itself is upsetting; and three, anyone who feels implicated in that should be more embarrassed than I was as a kid. It’s not my fault that I had that impulse to be taken seriously.”

The digital processing on “Partner in Crime” began as a placeholder for an imperfect vocal take, but she ended up liking the way the studio effect mirrored the song’s themes. “Falsifying yourself in order to become attractive — I mean, that’s Auto-Tune,” she adds. “I really like that song for that reason.”

Dacus’ life now looks very different from the one she had as an adolescent. “Up through middle school, my friend group would wake up super-early and go to Panera and have Bible study before school,” she says. “It was my social realm, spiritual realm, family realm. All my time was taken up by church-related stuff.”

While she no longer considers herself a believer in any faith — “I used to cling to ‘Christian agnostic,’ but I’ve dropped that” — she still thinks about God regularly, and she still feels “culturally Christian.” “When I meet other people who are out of church, there’s an immediate kinship,” Dacus says. “I miss how easy it was to connect to that community. I liked being connected to a group of people who wanted the world to be better.”

One thread that runs through the stories she tells on Home Video is a feeling of kindness toward that remembered youth, which, Dacus says, has grown stronger as the experiences have receded further into the distance. “I’m so far from that person now that I think that’s why I’m able to write about it,” she says. “It’s important to have tenderness for your past self, if you can, because there’s so much that you didn’t choose.” 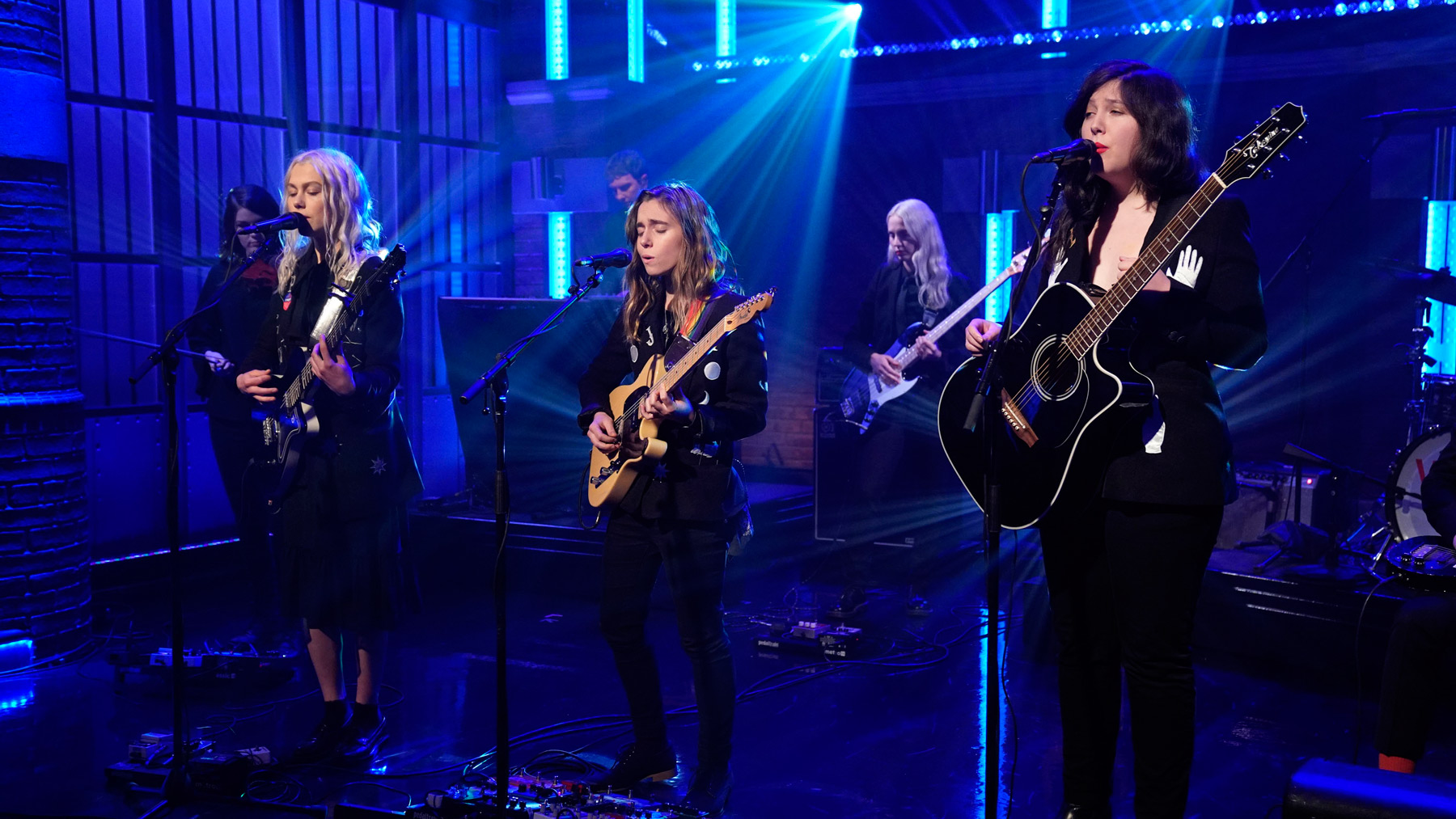 Boygenius performing on ‘Late Night with Seth Meyers’ in 2018.

In the last days of 2019, with the album nearly complete, Dacus moved to Philadelphia. “I had never lived anywhere other than Richmond, and I was starting to think, ‘What if I can’t? What if I’m stuck here?’” she says. “I had to do it to see if I could.” She and her housemates are all avid readers, and the room where she’s Zooming from resembles a library. “There’s poetry on top, music on the bottom, then that’s art and journals,” she says, pointing to each crowded shelf in turn. “Upstairs is all the fiction and nonfiction. I’m nearing that dream of just wall-to-wall books.”

On March 5th, 2020, Dacus and her bandmates stopped by the studio in Nashville before a show at the Ryman Auditorium to put the final touches on Home Video: “some twinkles here and there, and one little group vocal.” On March 8th, they played a music festival in Okeechobee, Florida. “I was trying to say we shouldn’t go,” she recalls. “We showed up and half the people weren’t there. Everyone was visibly scared. It was a weird, dystopian type of mood in the air.” Less than a week later, all live music in the U.S. was effectively shuttered due to the pandemic.

With the original plan of releasing Home Video in the fall of 2020 sliding out of reach, Dacus spent eight months mixing the LP remotely with engineer Shawn Everett (Haim, the Killers, Weezer). The release date “got pushed a lot, but I’m not pissed,” she says. “I honestly felt glad that we had all this time to get it right.”

When we spoke this spring, she was halfway through her vaccinations, and looking forward to getting back to life. “I’m just going to go everywhere and hug everyone that I love,” Dacus says. “I’m not much for going to clubs, but I want to go to the sweatiest, nastiest club, and dance for so long. I hate shopping, but I want to go to a shopping mall and try stuff on and get a smoothie.”

This fall, Dacus will return to the stage for her first tour since the pandemic began, bringing Home Video to audiences across America. She’s scheduled to begin in September, playing two nights in her hometown with her Boygenius bandmate Baker. They’re sure to be among the year’s most cathartic performances, but don’t call them sad.

“There’s so many other emotions,” Dacus says. “For instance, ‘Thumbs’ is hard to listen to for some people. But my friend that it’s about told me, ‘The song is about the fact that you were there for me on that day. And that’s not sad at all.’”

She pauses. “And sure, when she said that, it made me cry. But crying can be from being grateful, too.”