It’s been 10 years since Linda Ronstadt wrapped up her career as a performer with a show at the Municipal Auditorium in San Antonio, Texas, but she still vividly remembers how she felt that night. “I saw every concert I ever sang,” she says on the phone from San Francisco, where the singer been living a quiet life since becoming diagnosed with Parkinson’s disease in 2012. “They say your life flashes before your eyes when you die. But it does when you retire from singing, too.”

Ronstadt has maintained a very low profile ever since then, not even showing up for her Rock and Roll Hall of Fame induction ceremony in 2014. But she agreed to participate for the new documentary Linda Ronstadt: The Sound of My Voice, granting directors Rob Epstein and Jeffrey Friedman access to her vast video and audio archives. The film traces Ronstadt’s miraculous musical career — from her reign as the queen of country-rock in the 1970s to the multiple genres she dabbled in over the years, including opera, American standards and traditional Mexican music. “I was tired at the end [of watching it],” she laughs. “I thought, ‘I can’t believe I did that much stuff!'”

Ronstadt initially turned the filmmakers down, politely explaining that looking back at her life bores her. “I just felt [the idea] was too invasive and too self-absorbed,” she added. However, the duo won her over with a letter she describes as “highly literate,” and a promise to adapt the film from Ronstadt’s 2013 memoir Simple Dreams. “Our main concept was that the film would be in her voice, literally,” says Epstein. “She would be telling her own story. We highlighted the obvious benefit of a movie version: the audience has the pleasure of actually experiencing the music, very different from reading about it.”

With 10 top-10 singles and over 30 studio albums, Ronstadt was one of the most successful female singers of not just the Seventies, but any era. But because of her shy nature, lifelong aversion to self-promotion, and absence from the scene for so long, many of her accomplishments have been overlooked. “She projects such conviction and control when she sings on stage and in recordings, it’s startling to hear her talk about not thinking she was good enough,” says Friedman. “The insecurity she describes wasn’t debilitating. It’s the kind of self-questioning that drives an artist to excel.”

The simple fact that Ronstadt was a woman — especially one who didn’t write her own songs — in a largely male rock and roll scene didn’t help matters, Backed by an all-male band that she fondly refers to as her brothers (including the late bassist Kenny Edwards, who helped co-found her first band the Stone Poneys), the singer experienced sexism first-hand. “It was in everything,” she says. “But I find that what seriously mattered was whether the music is good. And the music was good enough for me to get really good players.”

In her second Rolling Stone cover, Annie Leibovitz photographed Ronstadt in 1976, intently staring at the camera in a silk red slip. “Annie brought it,” she recalls. “I said, ‘I don’t wear stuff like that.’ It made me change my subsequent album cover [1977’s Simple Dreams] because I didn’t really want that sexy image to be me. It’s hard to live up to that.”

Some of The Sound of My Voice‘s best moments are of Ronstadt defying this sexism, humorously and creatively. Her ex-boyfriend and bandmate J.D. Souther describes meeting her and asking if she’d make him dinner, only to come to her apartment and get handed a peanut butter and jelly sandwich. Elsewhere, Ronstadt performs onstage in a Cub Scout uniform that she altered into shorts to make more feminine. “Nicolette Larson and I were in New York together,” Ronstadt says. “We were both touring — we didn’t know what to wear in those days. I needed something that I could layer up, and I thought the Cub Scouts would be cute. It was really practical!” 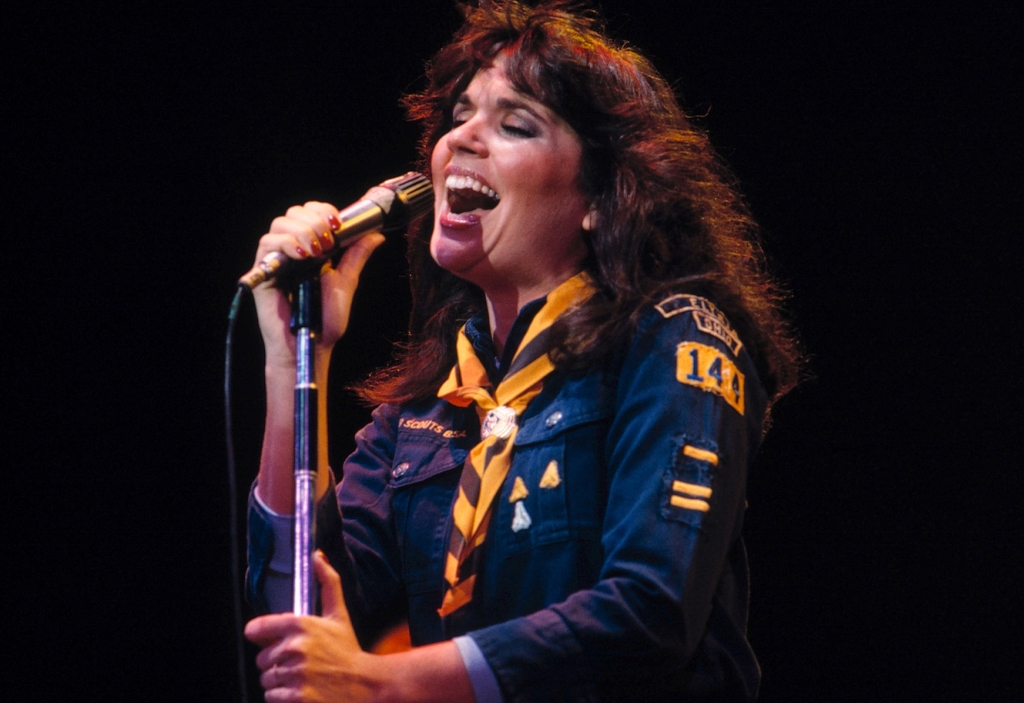 The film features many prominent musicians sharing their memories — including Dolly Parton, Don Henley and Bonnie Raitt — that Ronstadt still keeps in touch with. “When Emmylou [Harris] comes over, she gets a guitar and plays a new song,” she says. “The last time she came she brought her laundry. Instead of singing, we did laundry together.” Last March, she and Jackson Browne traveled to Mexico to teach music and dance to children. “It’s really hard to travel,” Ronstadt says. “The reason I went to Mexico is because we had a bus and I could lie down in the back.”

One person noticeably absent in the film is Jerry Brown, the former governor of California who Ronstadt had a high-profiled relationship with beginning in the mid-70s. “Linda’s a very private person,” Epstein says. “She and Jerry are still friends — they had Thanksgiving together last year. And her relationship with Jerry is certainly acknowledged in the film. But she made it clear that she didn’t want the film to dig into her personal relationships, and we were fine with that.”

These days, Ronstadt spends a lot of her time in San Francisco reading. “I read really thick books,” she says. “My mobility is pretty limited, and it’s hard to talk.” As a female rock icon, she has a lot to say about the current #MeToo movement. “I have a problem with people accusing someone like Al Franken, who is a great guy and is not guilty of one thing,” she says. “Nobody’s been more respectful of women. You’re standing on stage and you’re doing a love scene with somebody and they kiss you. That’s not a bad thing. I kissed Rex Smith every night in Pirates of Penzance and enjoyed it thoroughly. But when you have [someone like] Harvey Weinstein — when you have power over somebody and you say, ‘If you do this for me, I’ll give you a good part,’ that’s wrong.”

More than anything, Ronstadt misses being able to do the very thing that got her here. If she could still do it, she imagines she’d be singing with a choir. “I really love group singing,” she says. “And I’m sad I don’t get to sing with my family, because we really loved that.” When it’s mentioned that she poignantly sings traditional Mexican music with her nephew at the end of the film, she corrects the statement. “I’m not really singing,” she says. “But I’m trying.”