My early memories are waking up to the smell of breakfast and hearing concert DVDs of you,” H.E.R. tells Lenny Kravitz. The 22-year-old singer (real name Gabi Wilson) is talking about growing up the daughter of a dad in a funk-rock cover band. Kravitz, 55, says he was raised in an artistic household too, though he had a slightly different experience; his dad, a TV producer, and his mom, Roxie Roker, who starred on The Jeffersons for 11 years, took him to Lincoln Center and introduced him to friends like Nina Simone. “I was always the kid in the place full of adults,” he says. Kravitz loves H.E.R.’s “healing, soulful voice,” which can be heard on her debut album, winner of two Grammys this year. “The songs are really atmospheric and cinematic,” he says. “They’re like paintings.”

H.E.R. Performs Oscar-Nominated 'Fight for You' on 'Fallon'

KRAVITZ The first thing I ever saw of you, before hearing your records, a photo of you standing in front of a mic with a guitar. I was like, “Oh. . . .”

H.E.R. Yeah! I was around Sixties, Seventies, Eighties rock and blues — Jimi Hendrix, Prince, Lenny Kravitz. Everybody that my dad listened to, I was a fan of. I feel like I was born in the wrong era.

KRAVITZ I grew up in the house with Miles Davis, because my mother and [actress] Cicely Tyson, who’s Miles’ ex-wife, are like sisters. I grew up sitting on Duke Ellington’s lap while he played piano, going to the Apollo to see James Brown, going to Madison Square Garden to see the Jackson 5. [My parents] could’ve left me at home, but they didn’t. So I’m watching my mom rehearse, with Maya Angelou and Nikki Giovanni, Lorraine Hansberry. It seeps in.

H.E.R. I was a kid, and a lot of people followed me on YouTube, when people were doing covers. I was singing, but then I would be back on the playground. I got offered a deal at Interscope when I was 11. I didn’t wanna follow a mold. I wanted to be who I was, and I didn’t really know who I was.

KRAVITZ You were smart enough to know that.

KRAVITZ I left home when I was 15. [Record executives] saw my talent, but I wasn’t making the music that they thought I should be making, what my color skin should be making. So they’d offer me deals and say, “We know you’re talented, but you need to change your music.” 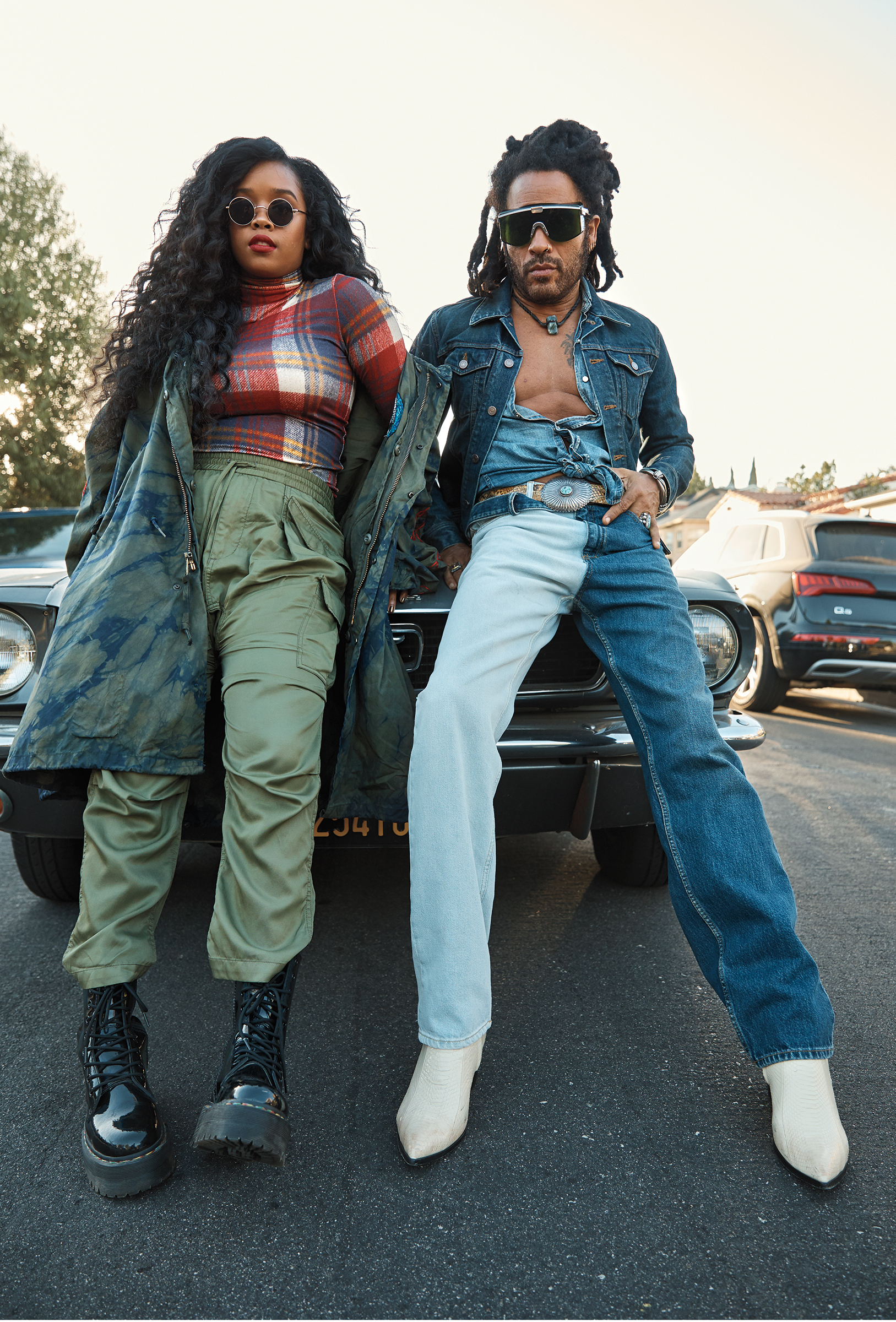 H.E.R. In anything, there’s always going to be pressure to conform, because that looks like it’s going to be easier. The fact that you turned that down, because something in your heart told you . . . I could have rushed to put myself out there, but that was not the move.

KRAVITZ With each album, I’m representing who I am at that moment, or what I’ve gone through in the year or two before. I’m on a two-year tour. Life is happening. But I don’t always have time to deal with issues and challenges and joys and loves. But it stores up. When the two years is done, I’ll just go back in the studio and get quiet.

H.E.R. What you said about not always having time as an artist to deal with life, that resonated with me so much. I’m that exact way.

KRAVITZ Where do you [record]?

H.E.R. Brooklyn. I work out of this studio called Electric Garden in Williamsburg.

H.E.R. I saw her one time! This next year I’m really working on tapping into myself, digging deeper. I haven’t fully sat into what I’m going to be. I’ve only been touring for two years.

KRAVITZ And trust me: Thirty years later, when you’re still doing it, you’ll still be finding who you are. I feel like I’m just getting comfortable with who I am.

In This Article: H.E.R., Lenny Kravitz, Musicians on Musicians