A narrow street in Buenos Aires rings with the melodic blare of Julián Pico’s voice and the low hum of his acoustic guitar. It’s a striking opening image for Argentine rock band Las Sombras’ debut short film,  El precio de la canción (in English, “The Price of the Song”), and the group — made up of Pico, drummer Mauro López, lead guitarist Nicolás Lippoli, and vocalist-guitarist Manuel Fernández —  has just begun.

After that first shot on the street, the camera moves into local record shop Exiles Records, where Lippoli tears into an electric guitar alongside Fernández on an acoustic for a pared-down take on “Espejismo” (“Mirage”), the opening track off Las Sombras’ hard-rocking second album, Crudo.  They move to a hallway, a small stage teasing the viewer in the distance. Fernández makes a whiskey for Pico, who launches into “Vos y Yo” (“You and Me”) from their first album. In the back, López is seen hanging out.

The scene unfolds inside Niceto Club, an important alternative music hub in the Argentine capital’s trendy Palermo neighborhood, where the four-piece group shot the film with director Diego Pinche. After one more acoustic rendition, Las Sombras plug in, reunited after much anticipation, and take the stage for an energetic seven-song electric set.

“We took a chance on ourselves,” Lippoli says over Zoom, sitting next to Fernández in front of a virtual background of the Golden Gate Bridge. “As far as videos, all we have online are a few clips and footage of this one particularly euphoric show at Niceto. This was something different.”

Hailing from the remote province of La Pampa, to the southwest of Buenos Aires, the proud pampeanos set up shop in Argentina’s capital city a few years ago and quickly made a name for themselves in the local scene. Inspired by psych rock, blues, soul, and the proud tradition of Argentine rock (known there as rock nacional), they put out their first record in 2016. Las Sombras’ self-titled debut is a stomping, guitar-heavy affair best heard IRL. Their challenge today is one not unfamiliar to musicians worldwide: How does one convey that live energy in this isolated moment? 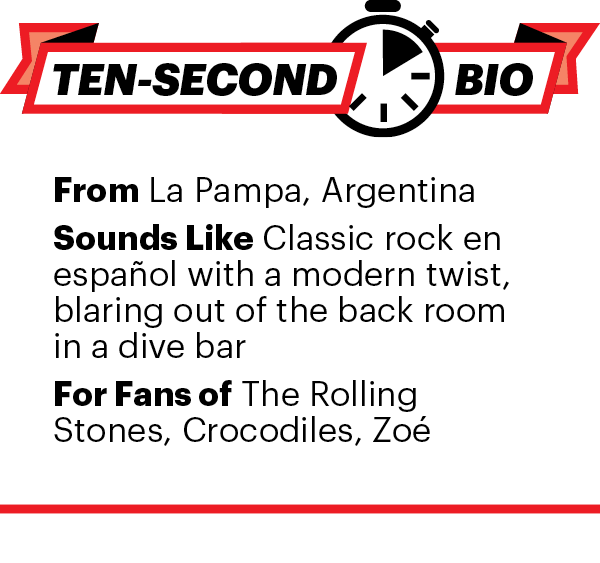 With streamings and livestream concerts as the new normal, Las Sombras wanted to craft an experience somewhere between a music video and a show itself. By capturing those small moments — the walk, the pre-show cigarette, the show and post-show comedown — they’ve done more than bring themselves into a living room. They’ve made viewers feel like friends of the band, and made a bold attempt to bottle the experience of heading to a venue to see a rock show at a time when that feels far away.

For Las Sombras, 2020 was a year of renewed creativity, especially once lockdown in Buenos Aires began to relax and recording spaces began to open around mid-November. “I’m happy to say it’s helped us really focus, not just on making the film but on getting demos going for the third record,” says Fernández. “There were a lot of people who lost focus, and I think it cleaned up the scene here a bit. I’m expecting a big return to guitar bands.”

Lippoli chimes in: “We’re driven by our anxiety to keep the motor running; in that sense, we never really stopped. We kept a tight schedule, had our day of the week to record,  and had a demo ready every week so that when things go back to normal we’ll have material ready to start working.”

Aside from prepping new material, Las Sombras are invested in channeling the unique feeling of live music, the little mistakes and reinterpretations that are so missed these days. They released an acoustic version of “Nada Más” from a pre-quarantine show at Niceto alongside bolero group Las Perlas and continued exploring and stretching the range of their guitar-heavy sound. The group also contributed “La indiferencía,” a cover of fellow underground artist Santiago Santiago, for a compilation by indie radio station Radio Colmena, an effort where new artists covered each other to foster community.

Las Sombras’ new album, while still in progress, diverges from their melodic rock sound; they say it’s just as informed by the freewheeling rhythms of jazz and Argentine tango. This philosophy connects to the country’s long rock history, with legendary rock nacional forefathers like Luis Alberto Spinetta fusing the classic bandoneon accordion ring with electric guitars. In that vein, Las Sombras are experimenting with the sounds of bonaerense lore and playing with pop, synthesizers, and hip-hop rhythms while keeping a rock vibe all their own.

“The guitars will have more effects, for sure…we’re breaking with every single thing we’ve built,” says Fernández. “We’re convinced whoever has been following us may be a little shocked by this coming record. We’ve been making these songs in our living room in quarantine and they’re pretty diverse, but stay united by the sonic world we’ve been working on every Saturday.” 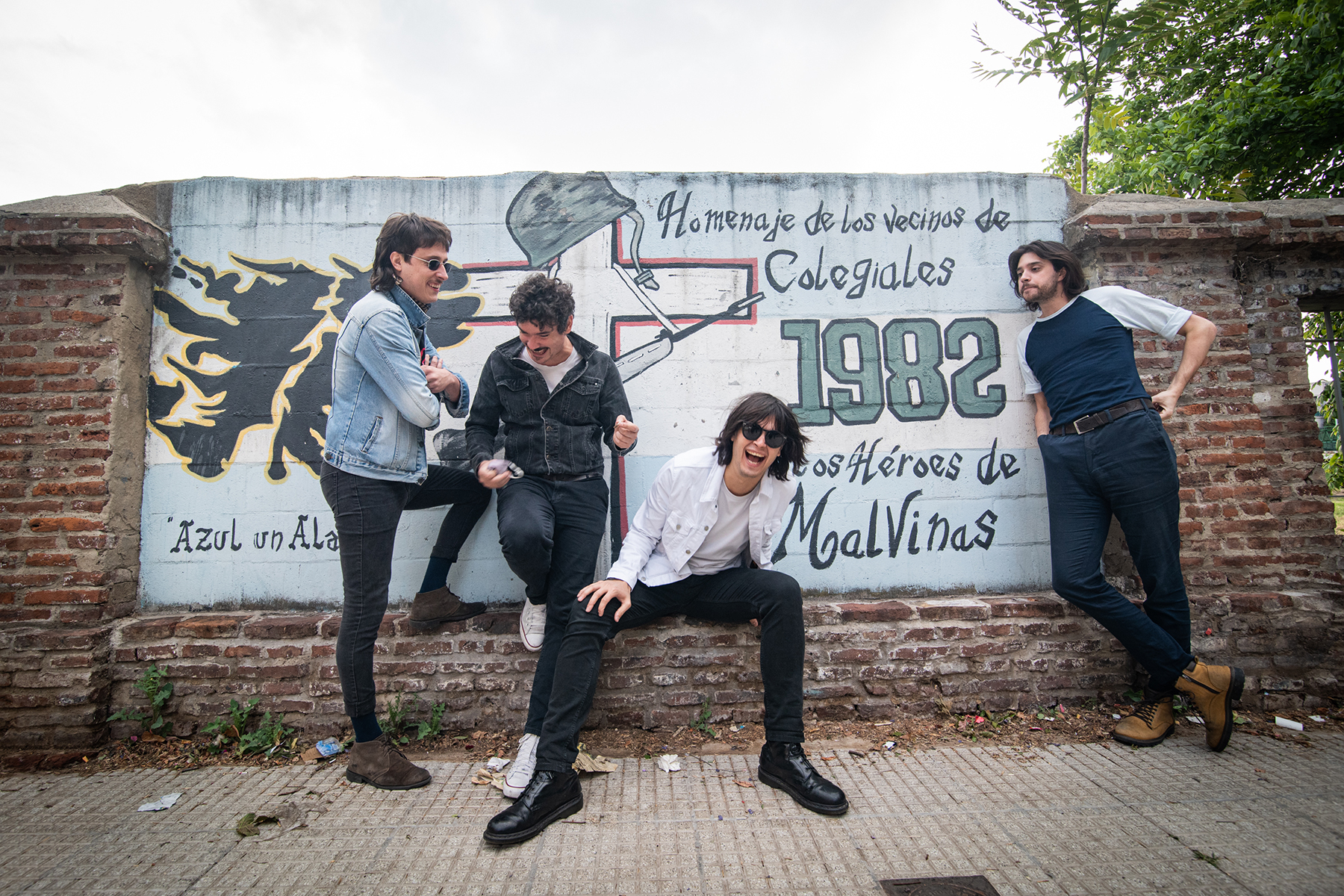 Las Sombras are working on a new album that will expand their sound in new directions.

Their previous record, Crudo, was recorded live at MCL Records with legendary rock nacional engineer Mario Breuer, who has lent his ear to such Argentine rock icons as Charly García, Andrés Calamaro, and Patricio Rey y sus Redonditos de Ricota. Breuer saw Las Sombras at Music Wins Festival and got in touch with them shortly after, advising the band to “foment autocriticism,” and encouraging them to look at their sound from another perspective.

It was a defining moment for the band creatively. Taking Breuer’s advice to heart, the quarantined rockers have concocted their most experimental work yet. If bands like Almendra, Vox Dei, and Serú Girán cast a large shadow over Argentine rock, Las Sombras aren’t intimidated. Rather, they’re the shadow cast, a gritty and forward-thinking extension of a long history.

“We see ourselves as part of a school trying to revindicate the tonality of rock nacional from the ’70s and ’80s, albeit more in the style than the lyrics,” says Lippoli. “It’s good to clarify this, because if we owe our style to that era, and there are a lot of references to it on our next record, I think that’s our legacy. Our message is contemporary, it’s about playing with the past and present.”

This interview has been translated from Spanish.