“The gigs are gonna be like the Haight-Ashbury during the Summer of Love,” Lamb of God frontman Randy Blythe joked when his band’s “feel-good” summer tour with thrash-metal legends Slayer was announced last month. “In case you couldn’t tell, I was being a bit smarmy there,” he told Rolling Stone during a recent chat about the upcoming run, which kicks off on July 12th and also features Polish death-metal heavyweights Behemoth on most dates. “I like the contrasting image of the three bands – you have Behemoth ripping up Bibles and spitting blood all over the place – and comparing that to the Haight-Ashbury in ’67.”

In addition to giving his thoughts on the tour, the good-natured vocalist and seasoned author/photographer – who traveled to the Standing Rock protests in November and wrote about the experience for RS – reminisced about his band’s lengthy history with Slayer, discussed why he never expected to become a metal singer and explained why the current political climate reminds him of Planet of the Apes.

Are you planning on following up your Standing Rock visit with any other politically motivated travel?
Well, in the next year, I’m going to be working on a new book once this tour cycle is over, and it is going to involve a lot of travel. I don’t know how much politics will be involved with it because it’s probably going to be more ecologically centered – not strictly political, if you know what I mean. It’s going to involve a lot of surfing, I know that.

The 100 Greatest Debut Singles of All Time

It’s kind of tied together to me because the ocean is basically the source of life for us on the planet, and if we screw it all up, then everything is going to die. I think there is a lot of shortsightedness about that. And before I went to Standing Rock, my concerns for water quality, that’s evident to me constantly as someone who surfs. I’ve seen varying water quality in different places around the world. It’s something that’s really concerning to me. So there will definitely be an ecological aspect to the book, but sometimes that also involves politics, too. Depending on the policies of wherever you are, whatever country it may be.

In the announcement for your upcoming tour with Slayer, you referred to it as the “feel-good event of the summer.” Why did you think to pitch it that way?
Well, in case you couldn’t tell, I was being a bit smarmy there [laughs]. Really, I was amusing myself because when you do a tour and they ask for the press for it, you can say, “Oh, we’re really excited to do this thing, and we can’t wait to come rock with you in Kalamazoo, Michigan,” or whatever, and it’s basically meaningless. So, you know, I like the contrasting image of the three bands – you have Behemoth ripping up Bibles and spitting blood all over the place – and comparing that to the Haight-Ashbury in ’67. It’s just an amusing bit of dissonance to me [laughs].

So you’ve reached your limit with spitting out the boilerplate promo quotes?
Yeah! The first one I ever did was for a festival in the Philippines. This guy Vernon we know who books us over there – great guy. But he’s like, “Can you do this pre-tour video?” – “Hey Philippines, we can’t wait to come see you.” So now that’s all the rage. Everyone wants you to take your iPhone and say how excited you are to come. The day we’re doing the interview, I realize the tour is five months away [laughs]. I can’t muster up a backflip for the tour yet.

I realize it’s part of the promotional aspect of the tour, and I’m gonna have a good time on this tour, with all the guys, me and Kerry [King] and [Behemoth’s] Nergal. What we said is all true. We’ve been friends for a long time. We haven’t toured together in a long time – it’s going to be a great time. But ultimately all that stuff is kind of vacuous – It’s stuff you’re just supposed to say, you know? I hope that doesn’t hurt anyone’s feelings, but that’s just the reality of it. For me, it’s funnier to talk about freakin’ hippies.

Yeah, it must be hard to psych yourself up on cue when someone turns on a camera.
Yeah, I’ve acted in a couple of movies, and I thought I was gonna be a natural at it. I’m not. I’m terrible [laughs]. 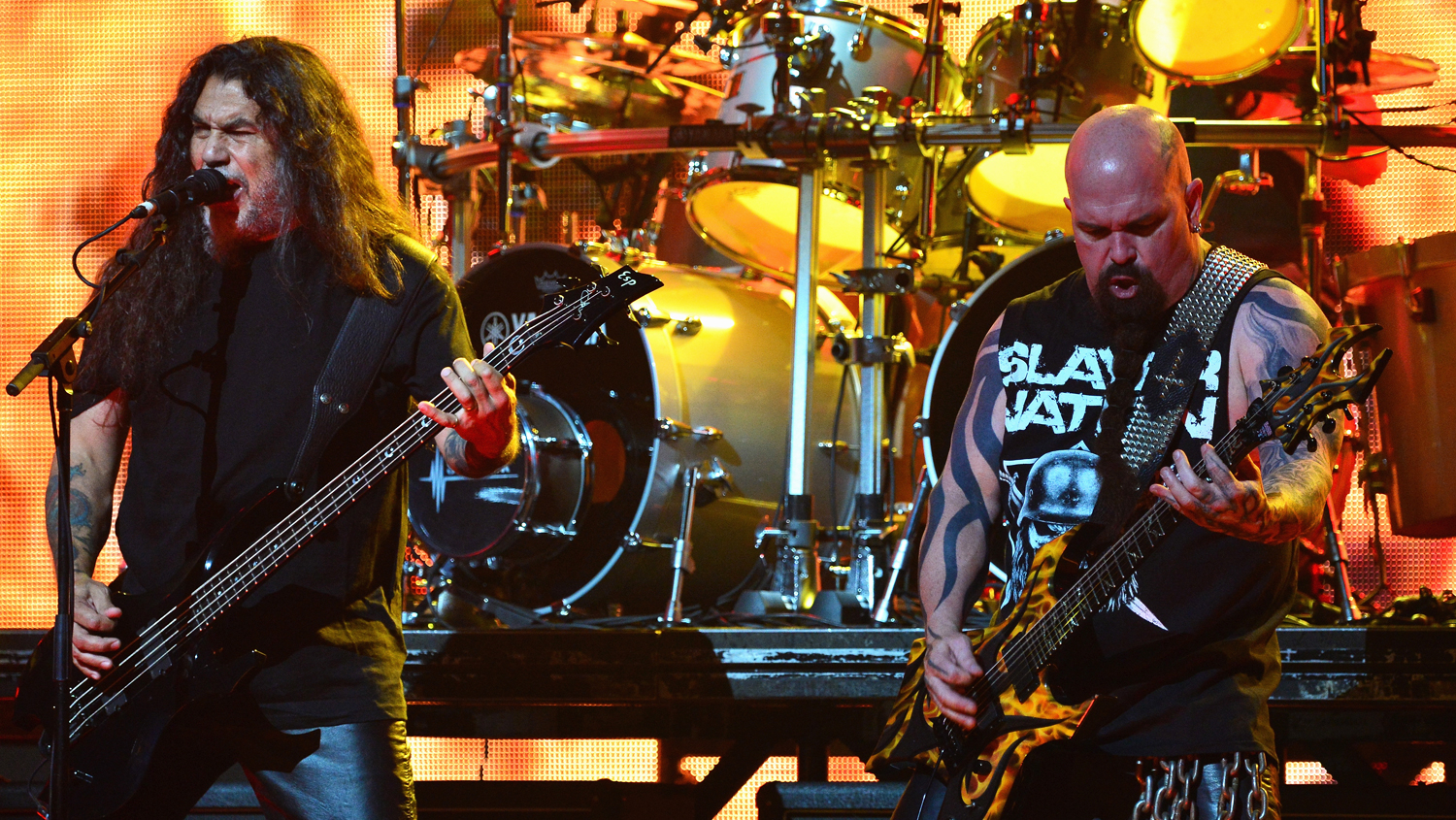 You’ve toured with Slayer before. What was it like going from being a fan of them to being a tourmate and friend?
Growing up, I wasn’t into metal. I only listened to a few metal bands. I don’t really even know how I wound up being the singer of a metal band. I thought I was gonna be Virginia’s answer to Johnny Rotten, or something. That’s not how it worked out. But Slayer was one of the few metal bands that I really, really dug because they were so aggressive. I got Reign in Blood in high school, and I believe that that was the first album that I ever bought that had a Parental Advisory sticker on it – I actually got ID’ed for it, I think. But yeah, big Slayer fan, and from Reign in Blood, that was the first thing I was really exposed to, and then onto South of Heaven and Seasons in the Abyss where they got a little bit slower and heavier, in my mind. I’ve just always been a Slayer fan. Them and Black Sabbath. Those are my two main metal bands. If I had to choose two metal bands to listen to for the rest of my life, it would be Slayer and Black Sabbath.

Coming from the punk-rock scene, I did listen to some metal, but Slayer was in heavy rotation, and they’re just fun to listen to. But the first time we played with Slayer was the first time we went to the U.K. And we played two gigs with them at the London Astoria – it’s no longer there. It’s a pretty famous venue, and it was just us as main support for Slayer for two nights in a row. They did all of Reign in Blood. And I remember standing there on the stage playing, and this is our first time out of the country as a band other than, like, Canada, which doesn’t really count, ’cause you can drive there. I’m onstage in London with one of my favorite metal bands and Kerry King had a shot for me, and all these people were there, and I was like, “Holy cow – I’m in England.” That was the first time I’d ever been to England, too. “And I’m direct support for Slayer – this actually could turn into a way I make my living.”

It was a very definitive moment for me. And then we did Ozzfest with them in ’04, got to know them a little bit better then, and then we did the Unholy Alliance [Tour in ’06]. We’ve run into them at festivals over the years. We’re friends now, so it’s really cool to be going out with them cause we haven’t toured with them on a headlining run in quite some time.

Did you see a lot of great package tours growing up?
I saw the Bad Brains, Leeway and Corrosion of Conformity in Virginia Beach in 1988? ’89? But that was kind of a different scene, you know what I mean? I didn’t really go to metal shows when I was growing up. I was always at the dingy punk-rock club or whatever, so I never really saw a lot of package tours. I was more likely to be in someone’s basement for a house show.

“Nobody really knows what exactly this administration will do.”

The last time you spoke with Rolling Stone, in October, you said, sarcastically, “Go Trump.” At this point, is it even possible to joke about him anymore?
[Laughs] Oh, everybody wants to talk about Trump. You know, I think we’re living in Planet of the Apes. My brother sent me some footage the other day from these Trump rallies in Lake Oswego, Oregon, and of course there were protestors. And there’s this one anti-Trump protestor who decides to start disrupting the Trump-rally people by just screeching incoherently. And then the Trump people surround her and start making animal noises, and soon all of them are just screaming incoherently at each other [laughs]. This is the state of modern political discourse in a nutshell. We are fucking living in Planet of the Apes.

The whole thing is mind-blowing. Trump has only been in office for, like, a month and a half. There’s so much shit that’s happened in the media. … I’m checking Fox News; I’m checking CNN; I’m checking the BBC to see what other people are saying. I’ll go on these horrible binges of going down the rabbit hole and reading all the different viewpoints of what’s going on. And, really, man, the reality of the situation, there’s no clarity to it yet, because nobody really knows what exactly this administration will do, can do. What will get through Congress, what won’t. Reality itself seems to become subjective at this point. So for me, you know, there’s some horrifying things, but there’s some shit that’s also absolutely fucking hilarious to me.

I have to look at it that way. People got really mad at Slayer when I think [Tom] Araya posted some picture of Slayer with Trump that said: “Make America Great Again.” People went apeshit. They’re, like, burning their Slayer records and stuff, and it’s like, don’t you people think just for a second maybe he was just being an asshole, like trying to get your goat? This is the singer of Slayer, you know? Come on, you know? So, it’s like, the whole situation … there’s really vocal minorities all around that are refusing to talk to each other. I guess that’s just like the last eight years of Congress refusing to talk to each other. The country has become completely bipartisan, and there’s not a lot of discourse. And I think that the intensity of all this can only last so long before people are gonna have to be like, “Look, we’ve got to chill the fuck out and be human beings and talk to each other somehow.”

Even if you guys aren’t necessarily up there dissing Trump onstage, it seems like a metal tour in 2017 might naturally take on that vibe.
I don’t know. I mean, I know that we have fans who are Trump supporters and we have fans that despise Trump. So to me, I think maybe the tour … This is such an aggressive package, too. That’s one thing I’m really stoked about. There’s no, like, nerdy prog aspect or weird soft-rock influence or anything. It’s just going to be blisteringly fucking painful. I think that the tour will probably just be a good way for people to get out a bunch of aggression. There’s a level of tension in America that is reaching sort of a boiling point, you know? I don’t know if there’d be any sort of protest aspect to it. I mean, we don’t even know what’s going to happen.

[Laughs] Everything is so bizarre right now. Every day is some sort of new crazy shit is being blasted across the media airways. Someone’s tweeting this and someone’s doing that, and are the Russians involved? It’s an overload. I think hopefully by the time of the summer, what the reality of the situation under this new administration is going to be will be a little bit more apparent because right now it seems – I don’t know – like a really loud game of clumsy chess.