Singer-songwriter Katie Pruitt looks like a saint on the cover of her debut album, Expectations. Framed by a cathedral window, she gazes skyward, surrounded by flowers. But instead of a halo, it’s a bright rainbow above her head.

“I always thought that churches are all very beautiful, and if I could create a stained glass window, what would it have in it? It’s got rainbows, and mountains, and flowers, and butterflies,” says Pruitt, seated at the counter of a Nashville coffee shop. “If I could have included more in it, without being cheesy, I would have. “

A soaring vocalist and agile guitarist, Pruitt is a dynamic new presence, blending folk and country with indie rock. She writes personal lyrics about topics ranging from her sexuality and mental health to family and faith — the Catholic tradition in which the 25-year-old was raised often works its way into her songs. In the Expectations track “Normal,” she sings, “Seven Hail Marys if I copped an attitude,” recounting a punishment during her time in school. It was a particularly hard period in Pruitt’s life, as she did her best to navigate the judgmental halls of a Catholic high school while in the closet.

“There were maybe two out people in my school,” she says. “One gay guy, one gay girl, and the gay girl got so much shit. Got bullied. So that was my one example of what your life will look like if you embrace this side of yourself.”

Pruitt came out at 20, but feared telling her parents. When she finally did, it created a seismic rift between her and her mother and father. She addresses the conflict in the staggering song “Georgia” via the most uncomfortable of home-life imagery: “My father would scream, he’d scream out in rage/He did not want a daughter whose soul wasn’t saved.”

“What I was afraid of was happening and that was a song about that,” Pruitt says. “But they have made strides and overcome their fear and discomfort with it, which I’m incredibly fucking proud of them for. It was difficult at first, but it taught me to have some patience.” 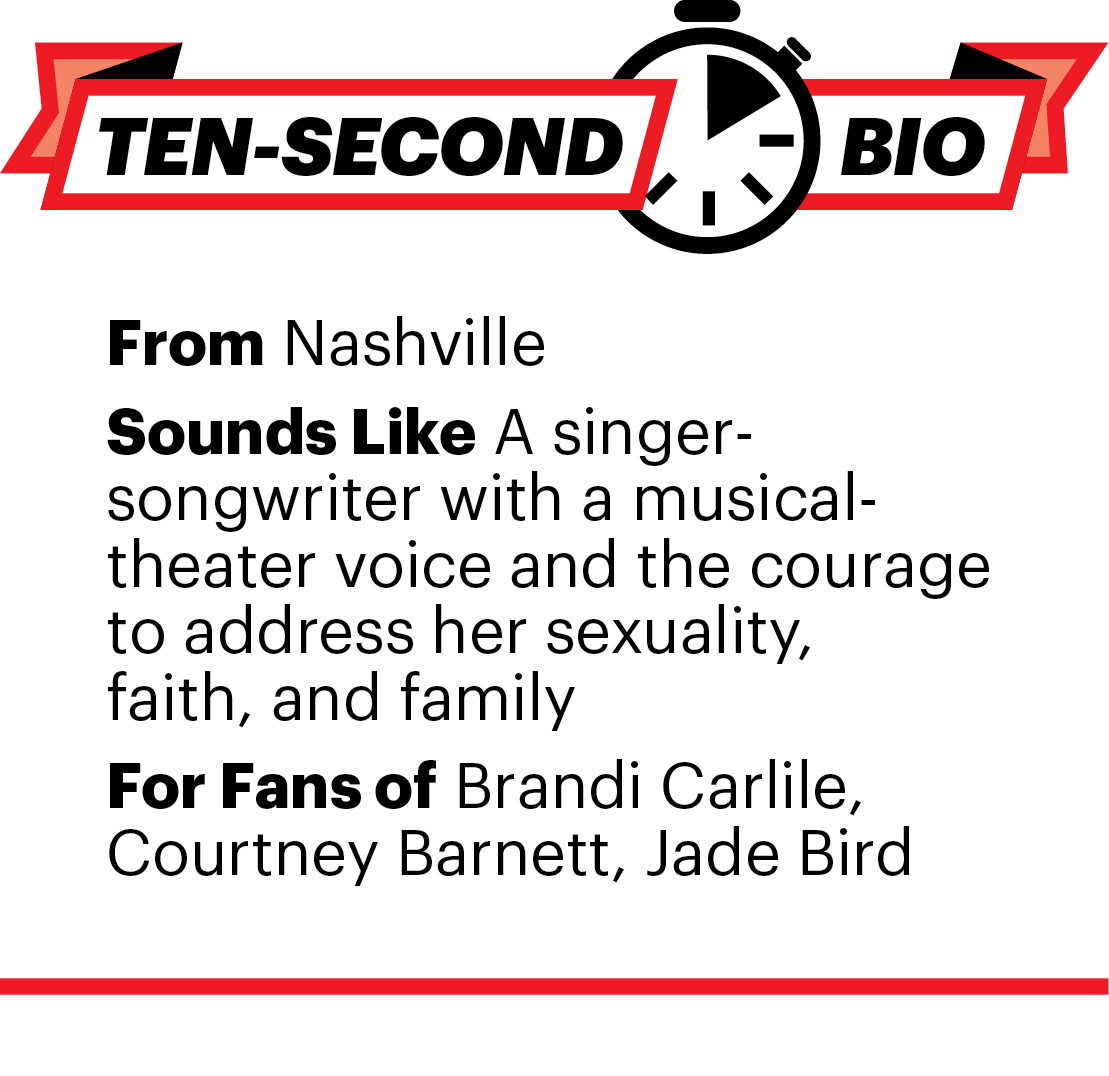 Still, Pruitt’s sexuality is just one part of her artistry. What makes Expectations such an engaging listen is its universal quality: It addresses themes relevant to everyone, and leaves you feeling inspired and comforted. Its core message is that you are not defined by any one thing.

“My [coming-out] was the catalyst of me feeling I was free from the restriction that I felt my whole life, but that can be anything: your religion or just the confines of your upbringing and what you think a normal life should be like,” she says. “The minute you stop letting other people dictate the way you think your life should go is a really liberating thing.”

Pruitt’s nimble guitar playing is essential to her sound (she used to sit in her room and study John Mayer and Dave Matthews), but it’s her elastic voice that you notice first. At times soft and soulful, it builds to a massive, cathartic wail in songs like “Expectations” and “Loving Her.” It’s Dolly Parton in its twang, with elements of Brandi Carlile, an inspiration for Pruitt.

“I love the way Brandi’s voice is honed. That’s something I had to learn. For the record, I wanted to be intentional about my moments, and not just be big the whole time,” she says. “But I love belting shit out. It’s like a release.”

She lets loose in the introspective “My Mind’s a Ship (That’s Going Down),” a slow-burning ballad about the doldrums of depression that culminates with Pruitt offering a glass-rattling scream.

“Mental health was something I was struggling with post-college — the pressures of figuring shit out,” she says. Pruitt’s girlfriend gave her some good advice. “She was like, ‘I think you’re underestimating the power of gratitude. Maybe you want to look around and let what you have be enough. The rest will come.'”

Since releasing Expectations in February, that’s been true. Pruitt has earned rave reviews for the LP, made live TV appearances, and shared the stage with Bob Weir for “Ramble on Rose” at the Ryman Auditorium. Last week, she used her personal songs to soothe a shell-shocked Nashville crowd at a tornado benefit.

“There is a reverence when you are being completely open and are connecting with an audience in a silent room,” Pruitt says, echoes of her raised-Catholic upbringing coming into focus. “I love the concept of thinking there is some force, but I never quite thought it was a man floating in the sky guarding a gate. I think god is anything good.”