I’m about to hang up my Zoom call with Juvenile when shock spreads across the rapper’s face. He needs to show me one last thing. “You know I gotta let you see these pieces,” he exclaims. Situated in his suburban St. Louis backyard, Juvenile grins with pride as he pans the phone around him. The chair he just hopped out of was built with his own hands, as were the cabinets, sofa tables, and stools filling the screen. Hidden inside his creations are electrical outlets or compartments for wine and champagne bottles. But it’s an assortment of light fixtures that hold the most special place in Juvenile’s heart.

“It’s The Hot Boys,” he says. “You know who that is, right?” Looking closer, I see that the four humanoid-looking fixtures — with their lightbulb heads and pipes approximating their arms and legs — represent the famous Cash Money rap group that Juvenile was part of in the late Nineties. The red-painted fixture is Lil Wayne, and the largest lamp is B.G., who “was a lil’ taller than all of us,” Juvenile recalls. More than two decades after he shifted the course of hip-hop with his off-kilter flow and booming voice on albums like his own 400 Degreez and the Hot Boys’ Guerilla Warfare, Juvenile seems thrilled to have honored his former group in appliance form.

The St. Louis sun shines behind Juvenile as he relaxes in a backyard covered with emerald-green grass. The scene’s domestic tranquility is closer to a King of the Hill episode than the chaos and youthful exuberance of his 1998 “Ha” video. Last year, Juvenile reunited with Cash Money co-founder Birdman to release Just Another Gangsta, kicking off a new phase of his career. Then Covid-19 struck, and much of that momentum came to a standstill. The 45-year-old artist had to find a new hobby, and like many industrious husbands during the pandemic, he turned to building. Quickly, Juvenile’s Instagram feed filled with photos and videos of liquor dispensers and spaceship lamps.

How did you start building furniture during the pandemic?
The whole building thing kind of came up with me as a kid. My stepfather is a carpenter. I’ve always been around building stuff as a kid. He was teaching me then how to do measurements, different woods and stuff like that. What triggered this back off with me was my wife wanted some things done in a clothing store that she owns. It’s called Hear Say by Shadonna. She wanted some racks made with the pipe. And I’m like, “I really don’t know what you’re talking about,” and she showed me some pictures. I looked at it. I was like, “I could do that. That’s nothing.” Then I started doing it. One thing led from that to me building furniture.

Have you always been good with your hands?
I always have been. I was a barber. I used to cut hair back in the days when I was young. I like to draw. So I’m pretty good with a straight line and pretty good with color schemes. Also getting the knowledge from my father-in-law, teaching me a little bit of electrician work, that helped me out as far as doing the wiring and making different stuff — not only building furniture, but making it compatible to where you could charge your phone.

Are you sketching out what you’re going to build, or do you get your materials and let your mind wander?
I get ideas off the Internet. I sketch. I might take somebody’s idea and enhance it, go my own direction with it. Sometimes I might just draw something. Sometimes I might say, “Hey, let me throw this down while it’s in my head, because if I don’t write it down right now, I’m not gonna remember it later on when I’m ready to do it.” So I get caught in different scenarios with it. Usually, I like to freestyle stuff.

Where are you getting your materials from?
A little bit everywhere, man. Like, for instance, I just bought two pieces of walnut wood from a guy that my sister-in-law got off the Internet. I don’t know where she got it, but I met him in a parking lot and paid him $20 for each slab. I ain’t even get out the car, because I’m like, “Man, this Covid…” I pull up. He don’t got no mask on. I’m like, “Look, man, slide the money through the window. Y’all stick that in the car.” I got to spray it down. My wife ain’t having it. So I had to spray everything down with alcohol before I could even do anything with it.

Wherever I’m at in the United States if I’m traveling in the car — ’cause I haven’t got on a plane since the pandemic started — I’m just stopping places. Right now, I’m in St. Louis. It’s this [home improvement store] called Menards, which we don’t have in New Orleans. I go there and I’ve been picking up stuff in there. I might just go to a local wood place and buy woods. I like to branch out. 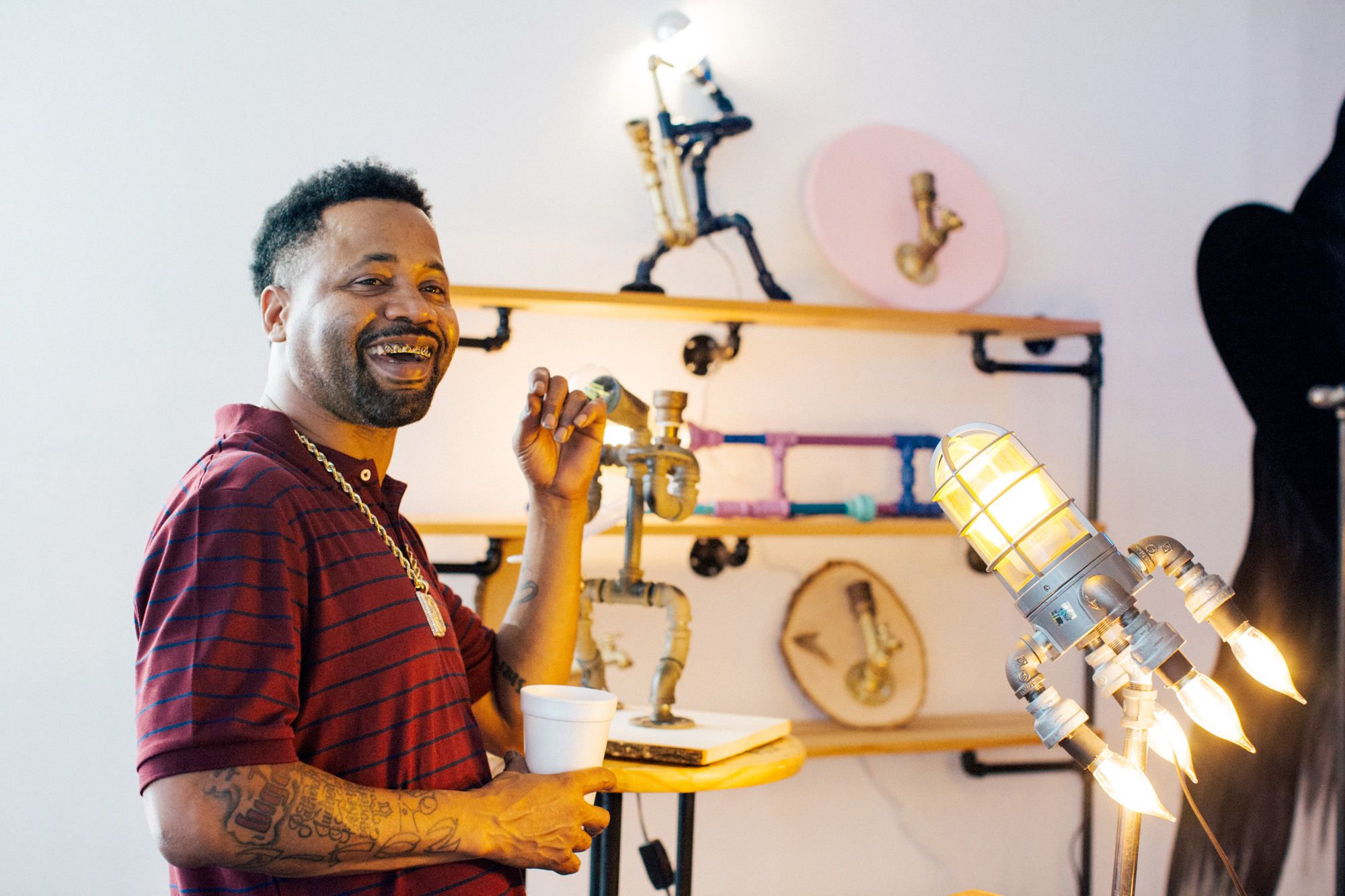 I’ve seen you build liquor dispensers, coffee tables, lighting fixtures. Will we ever see a Juvie sofa or bed frame?
I just built the sofa table, and my next move was to start doing a framework for my own sofa to complete my whole line, because that’s what I’m missing. My whole thing with making a sofa is I have to have the greatest upholsterer ever, because I don’t know anything about upholstery. So I got to have one of the best upholsterers ever, ’cause the ideas I have are so unique. I want it to look that unique to match my ideas.

I saw on Instagram that you were talking about working on a Web site for fans who want Juvenile furniture. Will they be able to to buy it?
In the next week, I’ll have a Web site up where you can get some pieces. It’s going to be called MadeByJuvie.com. And we’re going to have some pieces on there. My family been on my back about letting people get their hands on some of this stuff and enjoy it like we do.

In the past, we’ve seen people like Kanye West or Virgil Abloh working with and taking meetings with IKEA. For the next phase of your career, would you ever think of talking to some furniture companies and potentially doing a line with them that’s designed by you?
Of course, of course. Hopefully doing an interview that I wanted to do my whole life with Rolling Stone, maybe that helps it out.

From an emotional perspective, it’s such a tough time with the pandemic. What is it about working with your hands, building furniture, that brings you joy?
It’s so great to start from nothing and have a tool in your hand. Look at my toolset. I’m rolling around with that. I’m starting from that, and I’m making stuff. To me there’s just no valuing that. And to make something that’s going to be here for years after I’m gone… I can’t even explain it. It’s like music. It’s the same to me. It’s no different than making music.