It’s a few days before the autumn equinox, the leaves outside are still green and well attached to the trees, and Judas Priest frontman Rob Halford isn’t quite sure why he’s promoting a Christmas record right now. “I was surprised,” he says. “Our label says you have to start ramping these things up now. What is it, September? I’ve been posting about this album on my Instagram, and the fans are going, ‘Dude, it’s not even Halloween yet.’ But you can never have enough time in our world now to get the message out to find a place and prepare it for a great moment.”

The moment in question right now is Halford’s new solo album, Celestial, which pairs thrashy, metallic renditions of “God Rest Ye Merry Gentlemen” and “Deck the Halls” (seriously!) with Halford-band original carols like “Donner and Blitzen” and “Protected by the Light.” The record, which is a sequel of sorts to the 2009 solo album Halford III: Winter Songs (which contains a galloping “We Three Kings”), is officially billed to Rob Halford With Family and Friends. It features his brother Nigel on drums, his nephew Alex Hill (son of Priest bassist Ian Hill) on bass, and his sister Sue on bells, among others. The singer and his collaborators cut the album over a few years, partially on a farm in England in the summertime, between Halford’s commitments to Judas Priest, and despite the odd timing, he says the experience has been the greatest gift of all.

Song You Need to Know: Behold the Arctopus, 'Blessing in Disgust'

“We were like the heavy metal Partridge Family, the heavy metal Osmonds,” he says. “It’s great, man, to see your brother banging away on the kit and all the kind of cool stuff. It’s just a wonderful feeling.”

Despite the confusion about the pre-yuletide timing, Halford was still chipper on a call from his home in Phoenix as he, too, attempted to make sense of it all.

So what’s so metal about Christmas?
I think everybody, regardless of what musical genre you’re attached to or the kind of music that you love, there’s always music around the Christmastime holiday, that’s always been the case for me. Music doesn’t have anything connected to it other than the pure joy of expressing yourself as a musician. They call me the “Metal God,” and there’s no reason why the Metal God shouldn’t have his metal boots stomping all over Christmas [laughs].

Did Christmas mean a lot to you growing up? Was it a big holiday for the family?
Yeah, I think it is for most kids. I come from a pretty frugal background. My mom and dad, God bless them, they worked really, really hard to put food on the table, to pay the rent. We were in public housing. It was pretty rough, man. But the house was clean. We always had shoes on our feet. My mom would count the pennies every Friday when my dad put his pay package on the table. It was literally paycheck to paycheck. For some people in the world today, that’s still a fact. My mom and dad always found an opportunity to put a little bit of money to one side for Christmastime so that me and my sister had a couple of Christmas gifts each. And that’s the purest sense of the loving side of Christmas, without all the commercialization of it.

What gifts meant the most to you?
My dad brought me one of these steam-engine traction [train engines] when I was around seven or eight maybe. I think I passed it on to my nephew, Alex. I remember it was a toy that made noise and spat fire and … you had to put fire in it [laughs], and flames and all this stuff. God, that was even before metal [music] was invented.

You recorded the album in Birmingham, England, in your downtime from Judas Priest. How did you get into the Christmas spirit during the blazing summer?
We put a few Christmas lights up. There was a a picture of me on my Instagram with some Christmas lights floating around and a Christmas star, and I just said, “No Peace for the Wicked” or whatever, but nobody put it together that that’s what I was working on. And it’s in the words more than anything; you close your eyes and it can be Christmas anywhere.

How did you pick which of Christmas carols you wanted to “metallicize”?
I looked at the work that I did on Winter Songs; I didn’t want to repeat myself. There’s only a certain amount of standards, aren’t there, really? So I just made a list for the guys and said, “This is all about you; it’s not about me. You put the music together the way you want to feel, and I’ll just come in and do my bits when you’re ready. Just bear in mind I’ve got my face stuck on the cover.” The opportunities are endless. So “Hark! The Herald Angels Sing” in that punky, thrashy vibe is something that I’ve never done before. That was a screamer. I was happy to sit down on the farm in the barn in July and do that one. As a musician I’ve tried to make music that is diverse and interesting and entertaining and takes you on a trip and a journey.

“Away in a Manger” is almost like an outlaw-country song here.
It’s funny you should say that because, there’s this gay couple I know here in Phoenix, Jim and Gary. Jim’s a great guy in his seventies, and just a few weeks ago, I said to my friend Gary, “I’m gonna send Jim a song to have a listen to.” And he goes, “But don’t send him anything too heavy, nothing too metal. He can’t understand that.” [Laughs] So I sent him “Away in a Manger.” I texted Gary about an hour later, “Has he heard it? What did he say?” He went, “Dark and foreboding.” What the fuck? It’s “Away in a Manger,” dude. And now you’re saying it’s got this Western, outlaw vibe. This is what I love about music and about the way we all interpret it a little bit differently. I’m just pleased that it’s there, and it’s making emotions get stirred up.

We end the record with something that sounds like it’s from The Waltons, “Protected by the Light,” I was thinking, “Put me in a little wooden church, out in the Midwest on a prairie.” That’s my mood.

Did you bring the band the melody for that song?
The melody for that came while I was in the shower; I’m a shower singer. You have no idea when the lightning’s gonna strike. I put it down on my iPhone, ’cause I have total short-term memory loss, while I’m still wet and dripping and sent it off to Mike and start piecing it together.

You sing about “winter’s darkest moments” on that one. Do you experience seasonal affective disorder?
Yeah. That is a thing, isn’t it? Seasonal affective whatever … Well, I’m talking about the darkest moments … It’s a very pointed song because I also reference loved ones that we’ve lost, and to remember them. And you have to be very careful when you’re putting out this message because you don’t want to be gloomy or doomy; that’s why we’re protected by the light. It’s the inevitable light at the end of the tunnel. It’s all about hope, faith, and optimism, which I think is important to have in life anyway. God knows we need it in this country right now — don’t get me started. But, yeah, the darkest moments are more reflective than dark. I just like the emotional visual image of the darkness and the light from the candle. 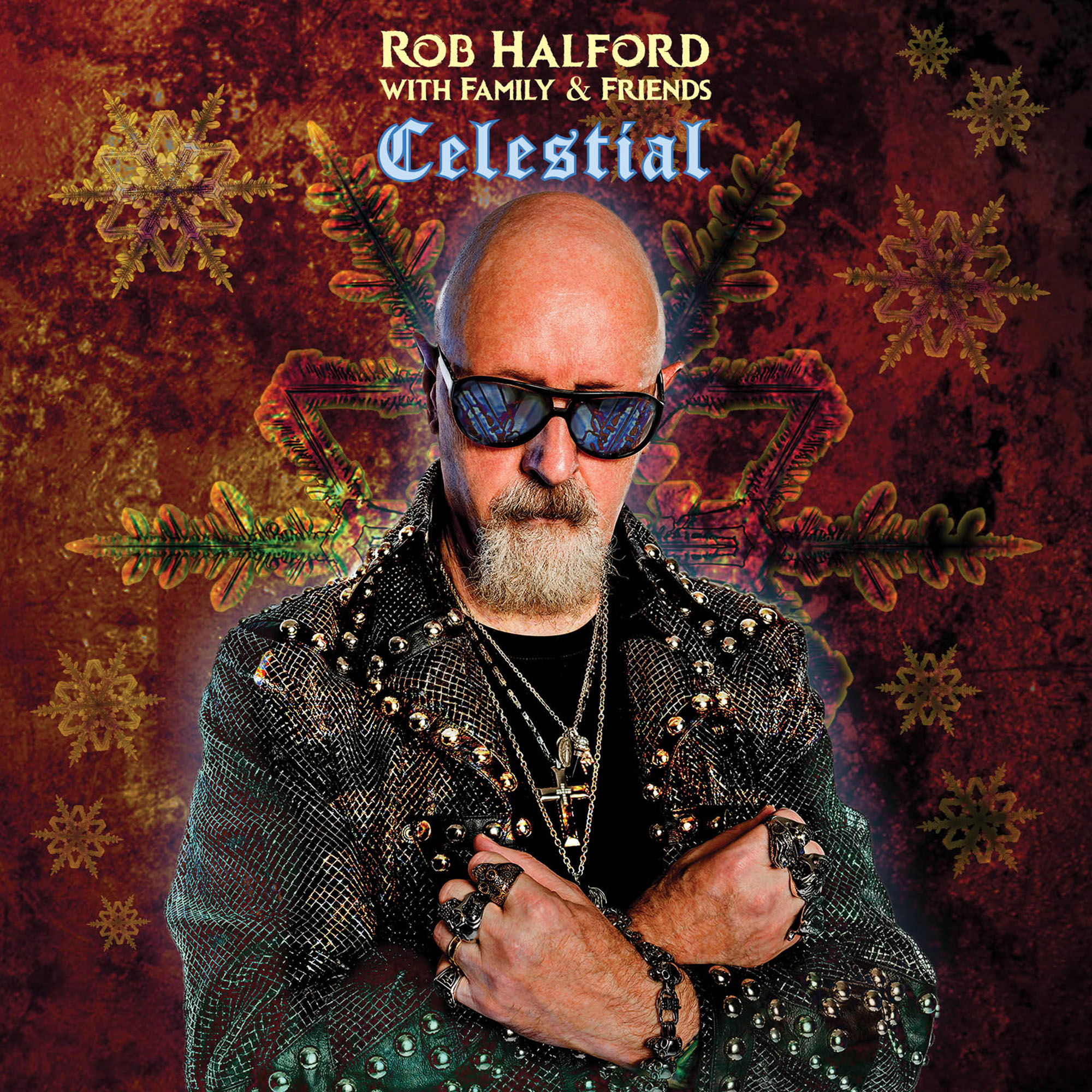 Did you worry with this album about making something that could be perceived as “Christian metal,” since there’s still a stigma against that?
I think it’s beautiful how over the years, [faith] is accepted more, particularly in the metal world. I was reading a nice story from Jacoby [Shaddix] from Papa Roach about being very open about his faith. Some of us talk about it more openly and directly than others. I wasn’t raised in a strict, religious family — we didn’t go to church every Sunday — but the basic tenets of what we believed in were very apparent in the house. But more important to me, once I started my sober journey in 1986, that side of me became alive and very important to me. And it is important to me on a daily basis, so that also weaves itself into all the music and the spiritual side of the Celestial.

You never really did devil-worship lyrics in Judas Priest.
Yeah, and I have a lot of friends that do that kind of thing in their bands, and with the First Amendment, it’s art. It should be censorship-free completely — a hundred, thousand percent. It doesn’t matter how disgusting and vile it might appear to others. Do not allow yourself to be censored. Say what you mean, say it from the heart. But in Priest, we’ve never really had a need or desire to go into that area. But I’ve always loved being in a band called Judas Priest because the two words together … you kind of make a bit of a bonfire for certain people.

Finally, this is Judas Priest’s 50th anniversary year. How will the band mark that achievement?
I’ve been feverishly working over the last few weeks and months with our stage designers to make something very, very special. We’re gonna go deep, deep, deep into the catalogue and try to find songs that we’ve never played before and wrap it up into the history of Priest and the 50th anniversary. The official Priest 50th spectacular starts next year. So it’s gonna be a great show. We’ve got some really big surprises and it’s gonna be a wonderful celebration of Priest and British heavy metal.