As a storyteller, every journalist strives for wholeness and symmetry, for a narrative that after all its circumnavigation returns to the beginning, as if to say, “Here, enclosed, is an entire world.” In both the subject and the assignment itself, my profile of Johnny Clegg — the pop star and political activist in South Africa — afforded a remarkable sense of coming full circle.

It was in the late Seventies, in the years immediately after the Soweto uprising, that I became fully aware of both the racial tragedy of South Africa and the magazine for which I would ultimately describe one part of it. I was working on a newspaper in the suburbs of Chicago, covering nearly 50 school districts and wondering if this was where the rainbow ended, when I read Jan Morris’s essay about South Africa in Rolling Stone. To this day I can remember riding the el toward a friend’s apartment, completely absorbed in her words.

Part of the appeal was Morris’s sure grasp of the South African psyche, as symbolized in her prolonged and precise description of the Voortrekker Monument. It is, she wrote, “no place for conciliations or second thoughts. It is more like a setting for Gotterdammerung, and all around it there stands a barricade of sculpted ox wagons, encircling the shrine in perpetual watchful laager, as if to imply that the Battle of Blood River is not over yet.”

Just as Morris’s subject influenced me, so did her prose. It possessed an elegance, a density of detail, an intellectual heft, that reassured me there was some reason to keep honing my craft on 700-word dispatches from the mundane world of DuPage County, Illinois. I never felt I held the imaginative power to create fiction, but Jan Morris, more than any other writer, demonstrated to me that nonfiction could be every bit as literary, every bit as morally urgent, as a novel.

Fortunately, I was not isolated in these aspirations. The paradox of my tenure at the Suburban Trib was that next to an editor who chain-smoked, picked his nose and ate Twinkies in a single bite sat a petite and brilliant young woman named Cissi Falligant, who had intended to become a professor of comparative literature. The three or four reporters with whom Cissi worked most closely as an editor called her Max, short for Maxwell Perkins. Besides inspiration and dreams, the most lasting gift she gave me was her copy of The Rolling Stone Reporting Style, an anthology by such first-generation RS writers as Ben Fong-Torres, Timothy Crouse and Joe Eszterhas. By the time I finished with it, the book had to be held together by tape, glue and staples.

As I moved from the Suburban Trib to The New York Times, the fascination with South Africa that Jan Morris had kindled grew into a campaign of self-education. I devoured the novels of Andre Brink, J.M. Coetzee and Nadine Gordimer and the plays of Athol Fugard, Barney Simon and Mbongeni Ngema. As a cultural reporter on the Times, I was able to interview many of these artists. Which only heightened my desire – my obsession, really – to report from South Africa itself.

Since the Times considered me too inexperienced to entrust with such an important foreign posting, I made my own plan. I would write a book about the shared tragedy of apartheid, and in 1986, I discovered an ideal scenario. A year and a half earlier, a young woman from Johannesburg had driven her maid home to the black township of Sebokeng. There her car crossed the path of a funeral procession mourning a ten-year-old boy who had been killed during random army strafing. Seeing the white woman, some of the marchers began pelting her car with stones, and one rock struck and killed her infant, seated beside her. Two deaths, two innocents: Here was the paradigm.

The dilemma was that I could never attain a visa. I visited the South African embassy in Washington to plead my case. I enlisted contacts ranging from a senator and a congressman to a colleague of the notorious Roy Cohn’s, who was defending the South African government in a civil suit in New York. Four different times I was rejected. From a source I learned what I already suspected: My articles in the Times about dissident South African artists had established me as a foe of the regime, an unacceptable risk.

I left the Times, started writing a different book and, with an introduction by a Times colleague to a Rolling Stone assistant managing editor named Robert Vare, developed a rich working relationship with the magazine. I wrote mostly about the nexus between popular music and social forces, profiling Los Lobos as emblems of the Mexican immigrant experience and following a Chicago blues band on a tour of Midwestern college towns, where it introduced young whites to the world of black culture. And so, from Rolling Stone‘s perspective, it made sense to have me write about Johnny Clegg and his immersion into both African music and the struggle against apartheid.

“Sounds great,” I told Jim Henke, the managing editor, when he called me with the assignment in December 1989. “The only problem is I probably can’t get into the country. Maybe you ought to ask Rian Malan to write this.”

After I summarized my previous thwarted efforts, Jim encouraged me to reapply for a visa anyway, even as the magazine planned to have a staff writer put in for a visa in case I failed again. The schedule was extraordinarily tight. Clegg was playing South Africa for two weeks in early January 1990 before beginning a world tour. A flight was booked for me and a photographer, David Katzenstein, on the evening of January 10th, giving us barely enough time to see Clegg’s last two shows. And for three weeks, the South African consulate in New York prevaricated, approving David but insisting my application had to be vetted in Pretoria. Only on January 8th was my visa granted. And as I later learned, it was awarded only because, as a favor to a friend who worked for Clegg’s record label, a South African woman who had never met me had assured the Department of Home Affairs she would take personal responsibility for my conduct. 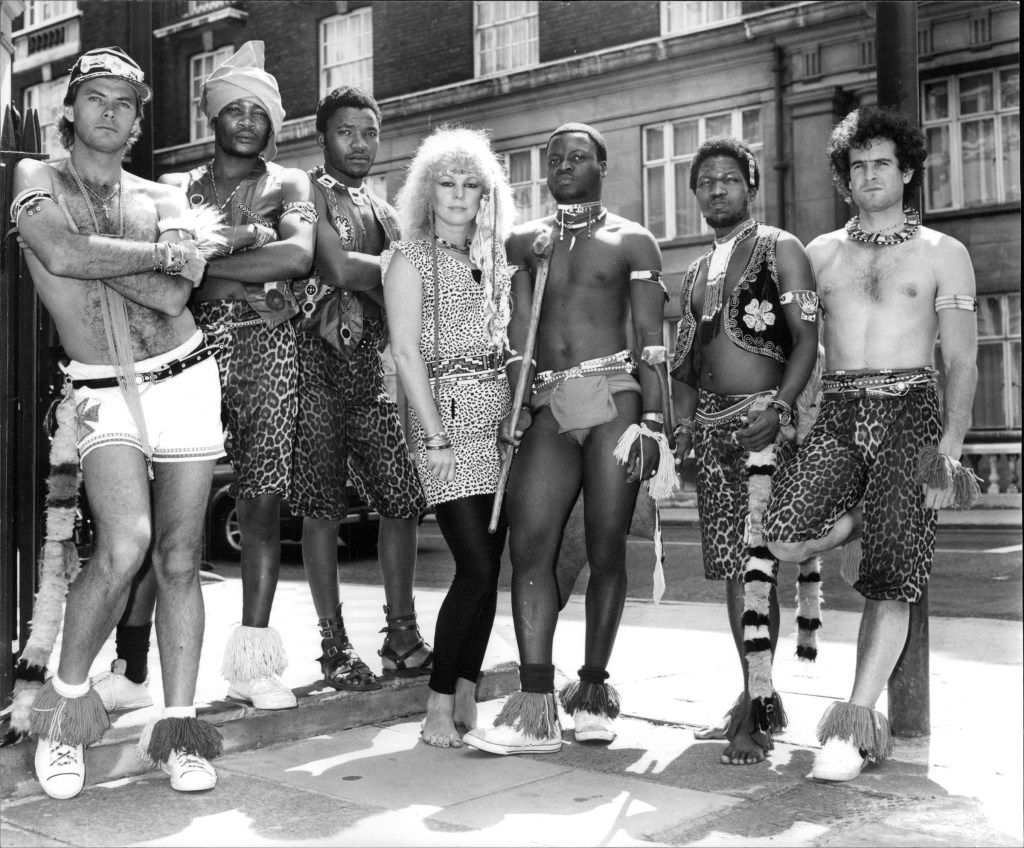 Still, as I debarked at Jan Smuts Airport on a glorious summer morning, I expected to be turned away at customs. Instead, I ambled through without incident and was met by Clegg’s indefatigable aide, Denzyl Fiegelson, clad in a tropical-print shirt. What was most shocking about South Africa was its ordinariness, its normalcy. The vivid footage on American newscasts of protests and tear gas and gunfire and death hardly prepared me for the shopping malls and glass skyscrapers and gardens of protea and jacaranda, for a landscape less reminiscent of war-ravaged Lebanon than sybaritic Southern California.

The story of white South Africa, as I discovered, was the story of seduction. The ease and pleasure that apartheid guaranteed — with job set-asides, cheap household labor, rights to the most fruitful land and countless other legal protections — whispered incessantly into white ears: “You are living in Paradise. You are living in Eden. Why surrender it for some abstract concept of right?”

Yes, insurrection raged, but in townships hidden over hillsides, tucked inside valleys. Yes, concrete walls and razor wire guarded the mansions, but affluence always seeks protection. Yes, blacks in ragged clothes carrying the tools of manual labor trudged along every street, but after a while they became merely part of the ambient radiation. For a white person in South Africa, living with apartheid required no more blindness than most white Americans muster as they neatly skirt townships called Brownsville and Lawndale and South Central.

It was Johnny Clegg’s refusal to be seduced that made him such an impressive person. In America, it cost antiapartheid activists nothing to campaign for divestment or erect a shantytown, all the while ignoring their own nation’s rampant race hate. But in South Africa, holding to ideals meant paying a price – being arrested and spied upon, having songs banned and shows canceled, mourning friends murdered by the state. I remember the matter-of-fact way Clegg’s mother, Muriel Pienaar, told me she knew her phone was bugged because she could hear the tape reels being changed each morning at ten. I remember the prosaic tone with which Clegg’s friend and associate Jabu Ngwenya pointed to the bullet holes in his Soweto home, left by a Special Branch assassination squad.

The Johnny Clegg I met and profiled had been pushed to a nearly suicidal despair, and yet he had shielded the pilot light of his hope. Now, in January 1990, events were finally moving toward him. State President F.W. DeKlerk was dismantling the legal scaffolding of apartheid and preparing to release Nelson Mandela. The opposition press was reemerging from hiding. A heady excitement, a Prague Spring sort of feeling, infused every conversation, because the long and hard work of establishing democracy under majority rule had not yet intruded on the ebullience.

And Clegg’s music provided the underscoring for the moment. All day, with unceasing eloquence, he would submit to interviews with journalists from the United States, West Germany and South Africa. He led reporters and photographers into Soweto and Sebokeng, to the migrant workers’ hostels on the fringes of Johannesburg. To satisfy camera crews and photographers, he performed Zulu dances and taught his son, Jesse, the tribal sport of stick fighting. Meanwhile, he was playing host to a houseful of relatives.

Yet when he mounted the stage in the Standard Bank Arena, with an energy that belied the day’s exhaustion, something more than the performer’s spirit animated him. He answered to a genuine sense of mission, and I answered to my own in transmuting his moral courage into words.