Joey Bada$$ was only a high school junior when “Survival Tactics,” the breakthrough single and centerpiece of his critically acclaimed 1999 mixtape, arrived in 2012. Looking back now, the Brooklyn-born hip-hop artist, 22, says he was “oblivious to a lot of things at the time.” Namely, that he could affect his listeners in such a profound way. “It was really weird for me,” he admits. “I had no idea on how much of an impact I had on the game, on people. I had no idea on how many people were listening and watching me. I was just taking it all in.”

Born Jo-Vaughn Virginie Scott in East Flatbush, Bada$$ first attracted attention as an art-school-educated teenager with a vivid reverence for socially conscious Nineties hip-hop. But as the rapper tells Rolling Stone, the past few years have seen him embracing his ability to effect social change – or at least speak truth to power – in his music like never before.

To that end, Bada$$ sees his new album, All-Amerikkkan Bada$$ – its title a nod to Ice Cube’s iconic AmeriKKKa’s Most Wanted and Capital Steez’s 2012 mixtape AmeriKKKan Corruption – as representative of “a whole shift in my personal thought.” The LP finds the rapper embracing his role as a highly visible artist with something to say about racism and injustice in contemporary America. “My greatest power is my voice,” he says. “So it starts with me bringing [these topics] into the conversation and putting it in the music.”

Bada$$ pinpoints the slew of unarmed black men who were victimized by police brutality in 2015, as well as an inspiring conversation with A Tribe Called Quest’s Q-Tip, as the genesis for his new album. “I felt really affected by it all because I’m just so close to it,” he says. “I’ve had encounters with police where I’ve been stopped and frisked or treated unfairly or misjudged and I could imagine those situations being something else.” Not surprisingly, Joey’s new music is direct and confrontational. On “Land of the Free,” a track constructed by the rapper and the album’s principal producer 1-900 in a single day, Bada$$ raps, “Sorry, America, but I will not be your solider/Obama just wasn’t enough, I just need some more closure/And Donald Trump is not equipped to take this country over/Let’s face facts ’cause we know what’s the real motives.”

“The vision is just so huge and universal that I need it to be felt,” Bada$$ says of All-Amerikkkan Bada$$ in a revealing conversation that touches on his evolution into a well-rounded artist, his acting career that includes a recurring role on FX’s Mr. Robot, and how he hopes to craft music that can “talk to everyone.”

When did you know you wanted to address police violence on your new album?
It started with this one song called “Babylon” that features Chronixx. I made that song after the death of Freddie Gray in Baltimore, Maryland. I was just so fired up because that year in general, 2015, there was a lot of killings of unarmed black men by police officers. It was really being pushed in the news and the media. It started to make me feel like I was somewhat responsible to do something about it. There comes a point in a musician’s life, especially when the country is undergoing a lot of shit, where you start to feel like you need to speak up. It’s about flexing my freedom of speech as much as I can.

Ultimately I want my music to talk to everyone. From the microcosm of it you might pull “black struggle” out of it. But the macro is so much greater than that: It’s human struggle. It’s a universal concept. It’s universal music. Ultimately I want it to touch everyone. But yeah, it does speak for a certain demographic of people more than it does others. … But ultimately it’s for the world.

This album feels more mature and self-aware than your debut.
Honestly that was the whole other part of it. The first part of me making this music is everything I just told you, which is how I’ve been feeling the last couple years, feeling like I had to do something about the shit that’s been happening in order to influence change. But the whole other side of it has been really learning how to make music. Before, everything was just me rapping to beats and maybe a little post-production after. But this one was really me producing the beats with the producers one by one – musicians coming together and all contributing to the body of art. I’m glad that you took that from it. That was definitely a step that I made and something I really wanted people to notice with this album. That growth. Last album I felt like an established hip-hop artist but not an established musician. …

The reaction to it has been everything I wanted and more. I put my all into this project and I gave it a lot of thought, a lot of heart, passion. My soul went into this. Just to see it be received in a way that the listener appreciates what I’m doing and what I’m saying is very satisfying. 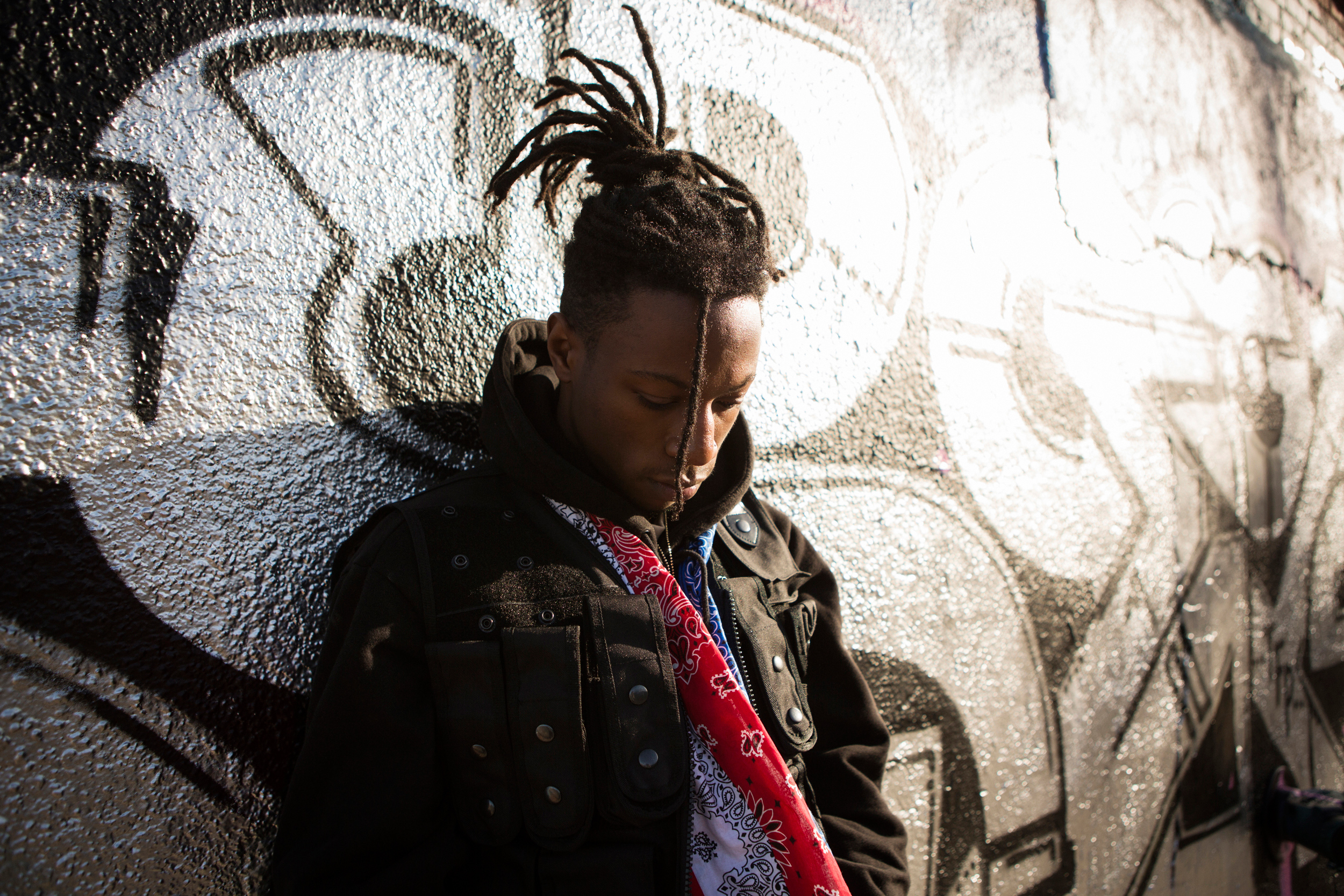 Some artists don’t feel free to speak their mind, but it seems like we’re starting to see more prominent figures like J Cole and Kendrick Lamar stepping up and doing so. Was there any caution on your part in opening up like that?
It’s weird. This industry, they want you to feel as if speaking out is the wrong thing to do. They make you feel as if once you start speaking out and shit you’re going to fuck your career up by getting involved with politics. But it’s the way you feel! I’m young. I’m part of the new generation. So we don’t really go by the old rules. It’s nothing for us to just do it our own way. So yeah, I do feel like more artists should speak up once they have the power because, again, on this album, I don’t feel like I’m just speaking for myself. There are so many people who feel the way that I feel about everything that I’m saying on this album, but they don’t have a voice that can be heard on this level. So I think it’s important for artists to speak for those people who listen to them who don’t have a voice.

Your career seemingly exploded overnight. That must have been a disorienting experience.
It wasn’t anything that I could have imagined that I would be dealing with at such a young age. And it’s funny because now being deep into the industry I see younger artists come in and they make the same mistakes that I made. Or I can just tell that they feel similar to the way that I felt. But it’s also different: When I came up it was right before Instagram was out and shit. So it was slightly harder for you to receive instant gratification than it is now. Younger artists, you can be on Instagram and shit and you can kinda gauge how much popularity you have. But when I first came out I didn’t really know how much people I was touching and affecting.

I was learning. I was a super-baby. And I’m still a baby. Well, maybe I’m a child now. I was an infant then.

You were a teenager and yet everyone viewed you as something of a hip-hop traditionalist and boom-bap revivalist. How do you feel about that label, looking back?
That led me to be put in this kind of box that I grew to dislike a lot. The whole Nineties boom-bap image that people was giving me. It was cool … don’t get me wrong. And I know it was part of my image and my sound. But I just started to feel like people were trying to force who I was. “Whoa! Y’all don’t even know what I’m capable of. Y’all don’t know how versatile I really am. This is not all I do!” I started getting really aggravated when people was stuffing me into that box. That’s what pushed me to grow as an artist even more. It pushed me to step outside my comfort zone even more. Because people was labeling me as one thing, and as an artist that’s never something that you want. I know it’s not me. I can do everything as far as versatility and making music. It was something I felt like I had to really break out of. 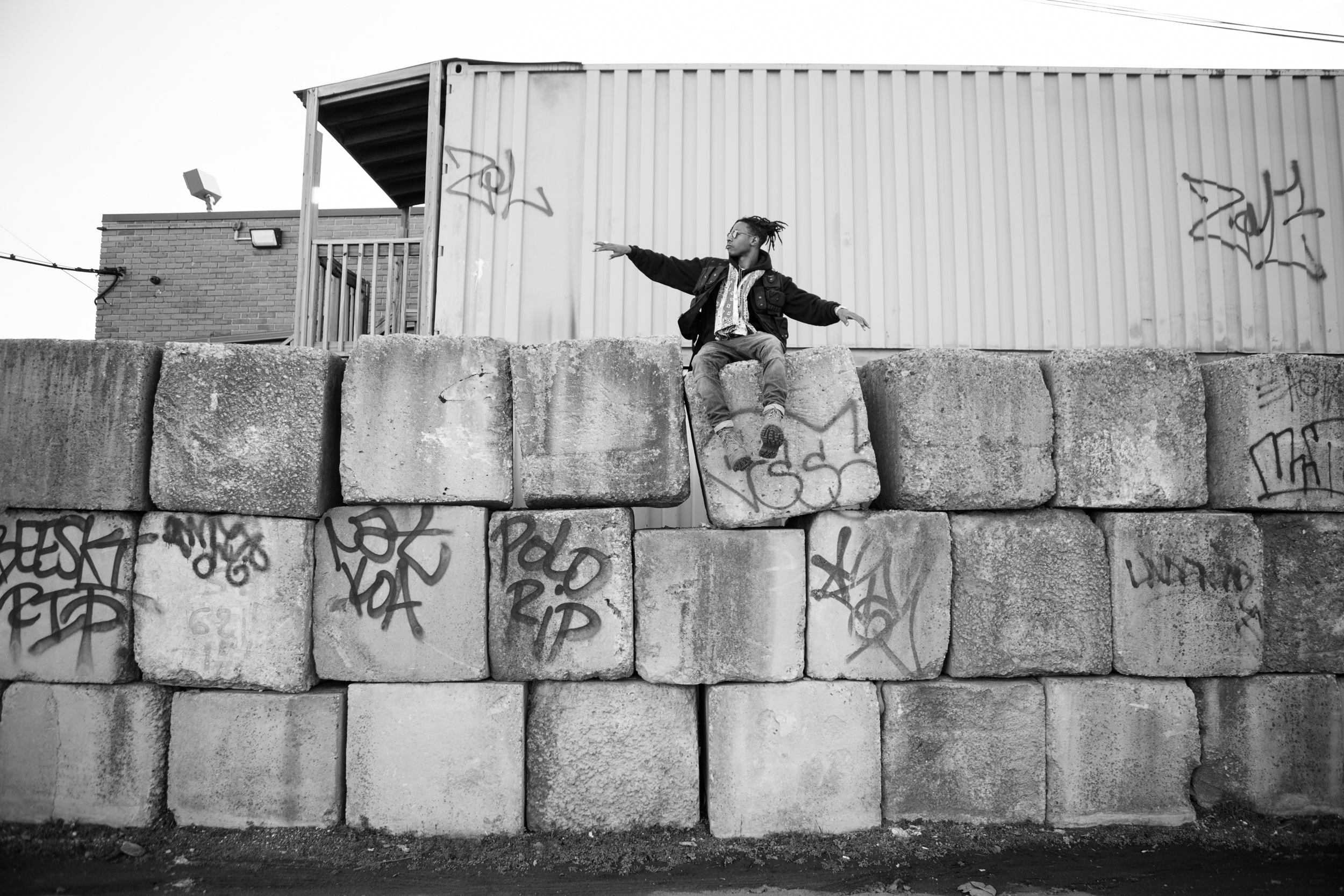 On a different note, you’ve recently been acting on Mr. Robot. How did that experience help expand the boundaries of your creativity?
It’s very important for me to stay creative. I stay creative in ways that people don’t even know. I design a lot of my own products with Adobe Illustrator. I used to sit on that shit for hours. I used to design my album artwork. I just like designing. I just like creating whether it’s music or clothes or ideas for other people. It’s very important for me to create. I’m hands-on with everything I do: I edit and direct my own videos. I am a creator. I must be creative. So it felt very imperative for me.

I enjoy wearing different hats. I enjoy taking on different roles. I’m also aware of being a jack-of-all-trades and a master at none. I make sure I stick to what is my bread and butter and I sharpen that the most before I get too crazy and am all over the place. But I enjoy taking part in multiple different types of extracurricular shit [laughs].

As successful as you’ve been, do you find yourself aiming for an even bigger mainstream breakthrough?
There definitely is that desire to get huge. The message was the most important thing to me on this album, but the sound … when you hear it, I wanted it to be felt and heard as if it’s just huge. As soon as it comes through the speakers I want you to feel like, “Wow! This is major!” I made all the music with the thought in mind that I was performing each song in front of 50,000 people. The music is perfectly tailored for a festival concert. I need thousands of people to feel it at a time.