Musical-theater productions tend to gestate for long periods, but Red Roses, Green Gold, the Off-Broadway show featuring the music of the Grateful Dead that opened in October, still seems like a special case. Playwright Michael Norman Mann first had the idea for the show when he attended a Dead gig in the Nineties and remarked to a friend that he thought their songs could be turned into show tunes.

“He took my beer away from me,” Mann recalls, “and said, ‘You’re done.'” A few years later, when Mann got serious about creating a musical using Jerry Garcia and Robert Hunter songs, skepticism prevailed: “Even people who understood the band looked at me and said, ‘What are you talking about? You think you can do that with these songs?’ I would say, ‘As a matter of fact, I do.'”

Inside the New Wave of Rock Musicals

Twenty years and several incarnations later, Mann has achieved the seemingly impossible with Red Roses, Green Gold. Set at the fictitious “Palace Saloon and Mining Company in Cumberland, USA,” the show, currently playing at the Minetta Lane Theatre in New York’s Greenwich Village, uses 18 Dead classics largely from the American Beauty and Workingman’s Dead era, along with one new Hunter song, “Drunkard’s Carol.” The musical centers on a quasi-Appalachian family wrestling with ways to hold onto their bar and mine, and the songs – which feature Hunter’s tales of gamblers, devils, and rogues in them – help accentuate that story.

“We’re treading in between a musical and Dead music,” says co-producer Gigi Pritzker. “So we’re not going to go into ‘Space.’ No drum solo! But I love the way the songs allude to the story line but without the characters breaking into song to give you more plot. The songs are next to the plot.”

Prior to getting to work on Red Roses, Green Gold, Mann, who graduated from the University of California at Santa Cruz (coincidentally, currently home to the Dead’s archives), had already written several plays, including the award-winning Box 27, about gays in the military. In 1997, he approached the Dead’s publishing company, Ice Nine, for permission to use their songs in a possible musical and was encouraged to proceed, with input from Hunter. “I didn’t want to make it biographical,” says Mann. “I didn’t want to write a play about the band or about people following the band on tour or a play about Sixties psychedelia. Hair covered that whole scene better than a Johnny-come-lately would.” Since he wasn’t portraying band members, he didn’t need permission from the surviving “core four” of the Dead.

First called Cumberland Blues and using different characters and plots than the current show, the production opened in San Francisco in 1998. But despite positive reviews, it shut down after less than a week. “It closed under the weight of its own expectations,” Mann says. “The lesson I learned was to slow down and be patient and not try to rush things.”

In the meantime, Mann also worked with Hunter on Shakedown Street, a one-shot Dead musical that featured swing-jazz versions of later songs (“Shakedown Street,” “Stella Blue,” “Help on the Way/Slipnot!”, “Loose Lucy”) in a detective-noir setting. Cumberland Blues was itself revived in 2005 at a theater festival. But it wasn’t until five years ago that another overhauled crack at the show – now renamed Red Roses, Green Gold and featuring new characters– began taking shape. 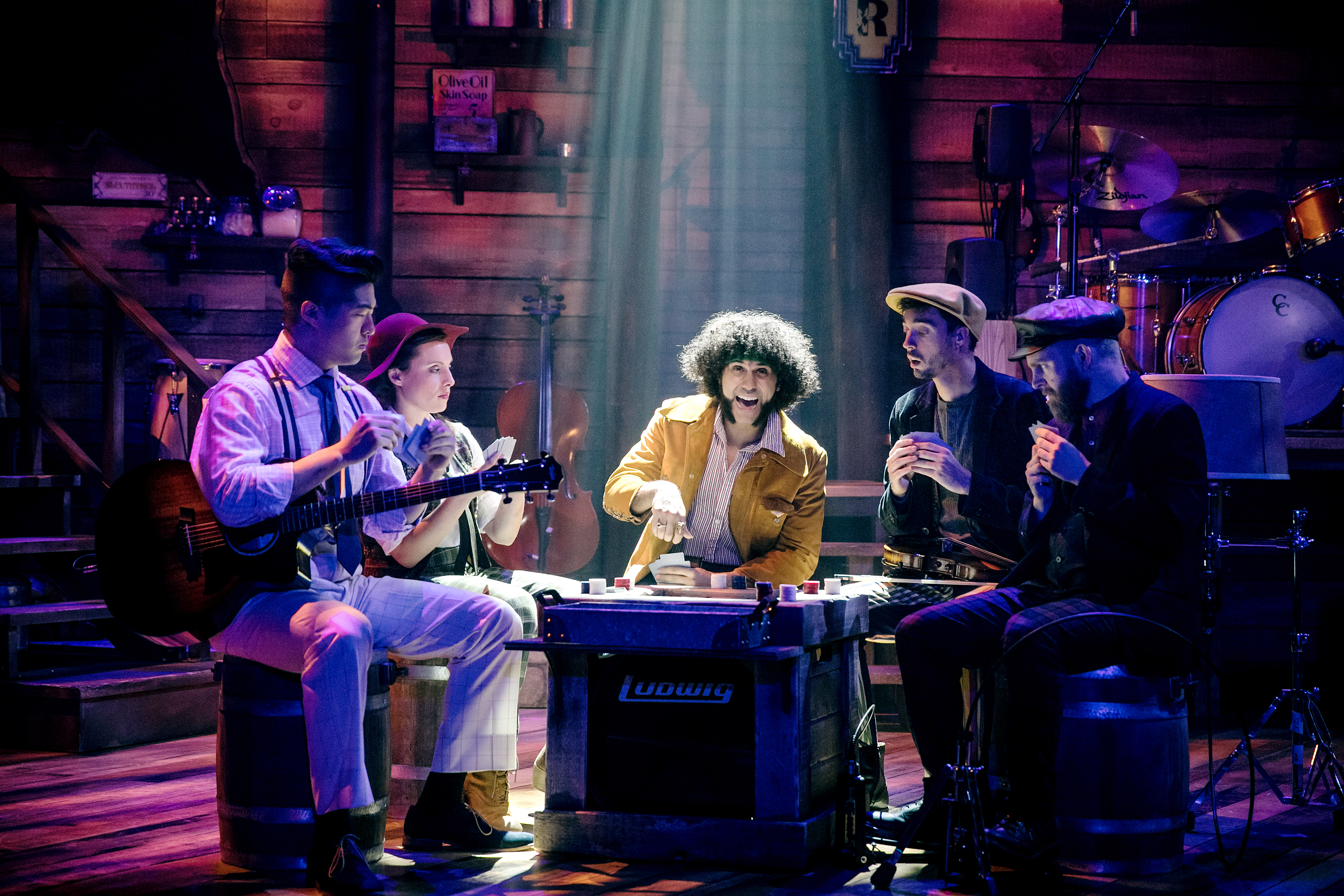 From the first show, Mann learned several lessons. “The early production focused more on the dark and brooding,” he says. “We had ‘Black Peter’ in there. But not everyone wants to watch a man physically dying on stage. And I learned that if I wasn’t careful, I could be repetitive. I’d want ‘Candyman’ and ‘Friend of the Devil,’ but they cover the same ground.”

Mounting the show still presented challenges. Many big-money investors shied away. “Some were like, ‘I don’t know if I want to touch this,'” says Pritzker, a longtime stage and film producer who was also behind the Million Dollar Quartet musical based around Elvis Presley, Jerry Lee Lewis, Johnny Cash and Carl Perkins. “It was a little out of the box for a lot of people.” Pritzker and her partner Ted Rawlins’ company, MWM Live, wound up providing the investment money themselves; to keep costs down, they decided on a small Off-Broadway theater instead of the Great White Way.

The show’s 11-person cast is among the most versatile in contemporary New York theater; throughout the show, each sings, acts and plays multiple instruments. But most had no knowledge of the Dead, so for the musical-supervisor job, Pritzker approached Jeff Chimenti, the longtime post-Garcia Dead accompanist who was in Furthur and now holds down the keyboard slot in Dead & Co. “They knew my background and needed some guidance,” Chimenti says of the cast. “Most of them didn’t have any history with this music. I was teaching them as much as I could.”

The resulting show features arrangements that are sometimes close to the Dead’s originals and sometimes not. “I wanted certain songs to be very rock-style like the Dead,” says Mann, “but I also wanted almost a throwback to the Sixties, when someone like Robert Goulet would walk to the front of the stage and you knew he was going to sing a ballad. I wanted to make ‘Bertha’ and ‘The Wheel’ big-time musical theater numbers. I step on Deadheads’ toes every once in a while. Deadheads aren’t as militant as Trekkies, but they share a lot of similarities.”

For Chimenti, the “a-ha” moment arrived during rehearsal as he watched two of the cast members sing an unplugged “Box of Rain.” “When I realized it was going to be a duet, I was like, ‘Wow, how’s that going to sound?'” he says. “But it was thrilling to see it when it first happened. This isn’t a show or a concert and people can’t expect to hear the Dead versions of these songs. They have to be open to it.”

Currently Red Roses, Green Gold is booked until January, with a possible extension. Mann knows the initial skepticism he encountered nearly two decades ago remains, but is hopeful his show will be given a chance. “On opening night, people had no idea what to expect,” he says. “And if that works against us, then it works against us. But I think it works for us. In musical theater, there’s nothing like being pleasantly surprised.”