In September of 2016, a young Venezuelan singer named Danny Ocean released “Me Rehúso,” a reggaeton-flavored ode to a lover left behind when he moved to Miami. The bracing, wistful track connected first in Ocean’s homeland, zipping up Venezuela’s viral chart on Spotify; soon it spread around Latin America, rising up the viral rankings in other countries. Within a year, Ocean had a global smash and a record deal with Warner Music Group.

This rapid ascent was just one impressive example of viral successes for Latin pop in a year full of them. On Spotify, global listening to Latin music grew 110 percent in 2017 (compare that to 74 percent growth in hip-hop), and 10 different Spanish-language singles made it onto the platform’s Global Top 50 chart, setting a new record. On YouTube, six of the top 10 most-viewed music videos globally were made by Latin artists – as opposed to just one in 2016 – as were 45 of the Top 100. The U.S. mainstream has long been resistant to songs in other languages, but casual listeners who don’t speak a word of Spanish now signal recognition when they hear Luis Fonsi and Daddy Yankee’s “Despacito” or J Balvin and Willy William’s “Mi Gente.”

According to artists and executives at both streaming platforms and major labels, several factors conspired to make 2017 the year of Spanish-language pop. Increasingly widespread adoption of streaming services in the Latin American market coincided with those services honing their playlist approach, allowing them to concentrate their considerable muscle on catapulting tracks into global ubiquity. Latin American acts have also relied more on collaboration in recent years, allowing artists to pool their fan bases and enhance the effects of streaming’s power.

As a result, “we have a new music-industry landscape which is much more diverse than it could have possibly been before,” says Rocio Guerrero, Head of Global Cultures at Spotify. “Streams don’t lie. The internet would have to break for this to stop.”

The streaming side of the Latin music market has been swelling rapidly for several years. “I think the first year was 2013 that we started to smell that something like this would happen,” says Jesús López, Chairman/CEO of Universal Music Latin America. Talk to Guerrero, who has watched reggaeton listening on Spotify outpace both hip-hop and pop between 2014 and 2017, or Sandra Jimenez, head of Latin American music at YouTube and Google Play, who saw the listening numbers of Latin pop hits on YouTube increase by 75 to 80 percent in both 2015 and 2016: They knew it was only a matter of time before the numbers became so big that the rest of the world would have no choice but to take note of Latin pop’s strength.

Nir Seroussi, president of Sony Music US Latin, identifies Nicky Jam and Enrique Iglesias’ 2015 smash “El Perdón” as “the big ah-ha moment” when he saw the Latin music market’s streaming power assert itself. “It was meant for our markets, and then it connected globally, and people were accepting it as a hit single, not just as a novelty,” Seroussi says. After that, he continues, “you started seeing more and more records following the same pattern. Last year at any given point there were three, four, five [Latin] records in Spotify or YouTube’s global chart.”

So what seems from afar like an out-of-the-norm explosion in Latin pop in 2017 is really just the logical next step in the growth cycle. But what made the year so exciting was the impressive assortment of young acts that were able to harness this streaming power into breakout years. Ocean took one path to stardom: He rode “Me Rehúso” for months and has only released two more songs to date. Same goes for Chris Jeday, who wrote and produced for reggaeton acts like Wisin & Yandel and Zion & Lennox before releasing his debut single at the end of 2016. He followed that with “Ahora Dice,” a springy trap single, in March, and has been content to watch it grow into an undeniable juggernaut – the song’s video recently cracked the billion views mark on YouTube, making it the 16th Latin-pop video to reach that threshold in 2017 alone.

Contrast this slow-drip release schedule with that of up-and-comers like Ozuna and Bad Bunny, who achieved ubiquity by releasing singles at breakneck speed. Ozuna’s lissome, lightweight vocals graced 12 Top 25 hits in 2017; he’s a buoyant presence even when heartbroken (“Tu Foto”). Bad Bunny, one of the foremost proponents of the rising Latin trap sound, also showed up on eight Top 25 hits this year. The best of these, “Si Tu Novio Te Deja Sola,” was so good that he basically made it twice (see “Sensualidad”), and anyone with passing knowledge of contemporary American hip-hop will recognize his intuitive blend of melodic rapping and low crooning. 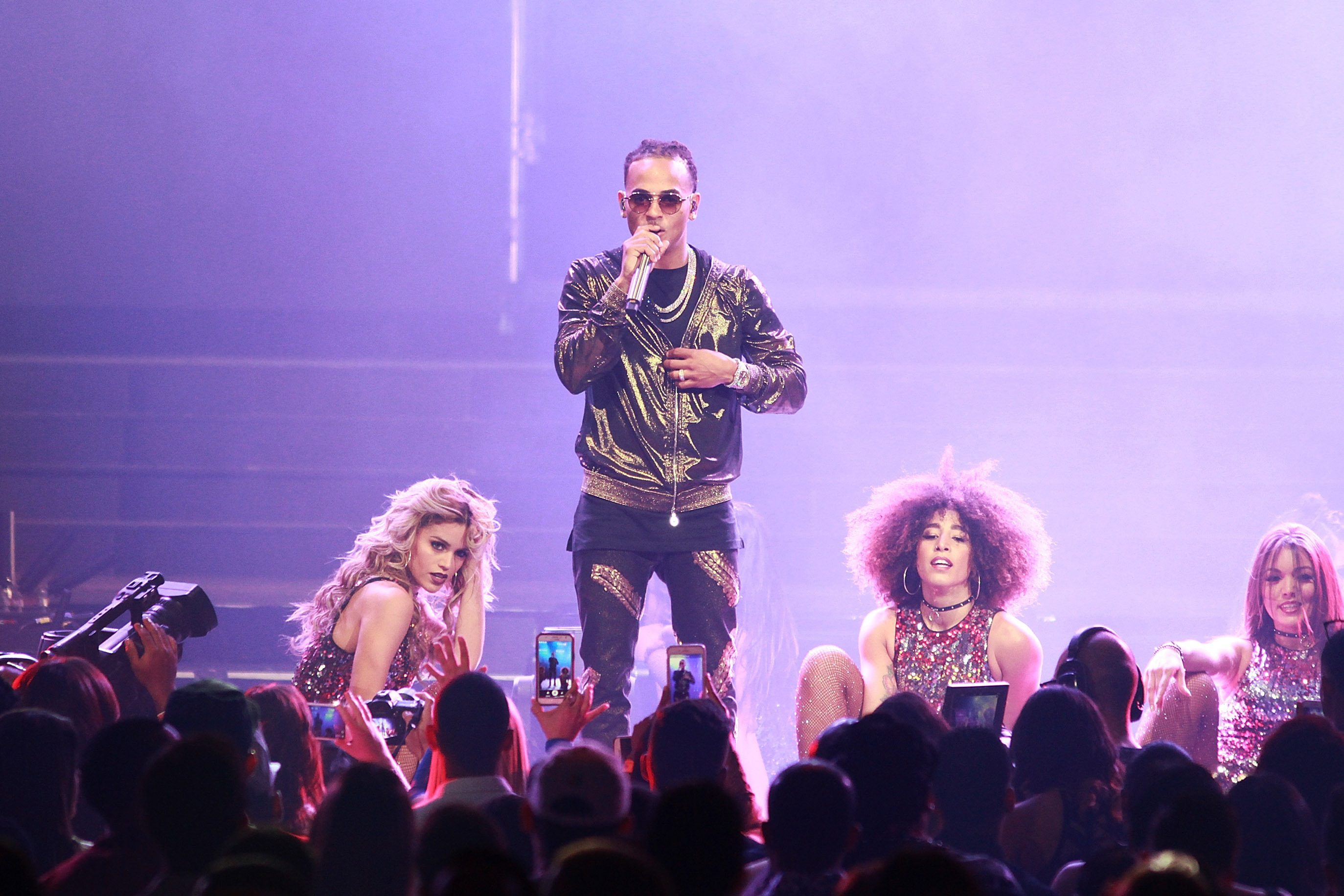 “Si Tu Novio Te Deja Sola” and “Sensualidad” both featured J Balvin, and it’s not a coincidence that many of these sterling singles are collaborations: Latin pop acts have helped maximize their power through cooperation in recent years. If you look at the top 25 most popular Latin singles of 2007, just three of those featured guests. But if you look at the Top 25 on Billboard‘s Hot Latin Songs chart for the week of December 23rd, 19 out of 25 tracks on the list include more than one artist or group.

Ismar SantaCruz, a director of radio strategy at Univision, believes the increasing tendency towards multi-artist tracks started when reggaeton became popular more than a decade ago. “Instead of looking for success alone, [those artists] were looking for success collectively,” he says. “It was about elevating the genre to a different level.”

“A few years ago,” he continues, “that symbolic wall between Puerto Rican reggaeton and Colombian reggaeton started to come down, and now instead of having one song by Daddy Yankee, you have a song that has four other artists on it. It creates this snowball effect that’s so much stronger.”

The practice has also moved beyond reggaetoneros, and the collaborative impulse in Latin pop has allowed the rising tide of streaming to reach veteran acts as well as youngsters. This is notably different from the American market, where it’s mostly young acts that accrue streaming power. But Ricky Martin and Shakira, who released their first albums in 1991, had two billion-views singles apiece this year.

The veteran performer Carlos Vives, who became famous by fusing the traditional Colombian music known as vallenato with rock, rarely collaborated on his own singles in the past, but he has teamed up with Daddy Yankee, Maluma, Shakira and Sebastián Yatra since 2014. “‘La Bicicleta’ [his duet with Shakira] was in markets I didn’t expect to be in,” he tells Rolling Stone, speaking through an interpreter. “Shakira is so big that people in other markets learned about Carlos Vives. That also happened when I worked with Daddy Yankee and with Marc Anthony. I’m from Colombia, but I’ve been able to get my music to every part of Latin America.” And now to the rest of the world – “La Bicicleta” was one of 10 Latin pop collaboration videos that reached a billion views on YouTube this year.

“Our music is a part of the vocabulary of the mainstream world, and now the sky’s the limit.” –Nir Seroussi, Sony Music US Latin

Latin pop has experienced other periods of explosive growth – crossing over in the U.S. behind Ricky Martin and Marc Anthony in the late 1990s and again during the reggaeton explosion of the mid-2000s – that ultimately fizzled. Will this moment be different?

Whether or not it continues in the U.S. is now irrelevant: The streaming power of Latin artists is great enough that they can bypass the U.S. market, where traditional gatekeepers like radio have long ignored music from Latin acts. Guerrero says that an act with a hit in Venezuela once required the resources and infrastructure of the U.S. music market to propel that song into worldwide rotation, but “today that’s not the case.” Songs like “Me Rehúso” will make their way to Spotify or YouTube’s global chart, where they are easily accessible to listeners far and wide. “The moment you see those results in the global chart, the game’s over,” she declares.

But it’s likely Latin pop will continue its North American takeover as well. “When you hear Ed Sheeran’s ‘Shape of You,’ it’s no longer the kick and snare on the downbeat; you’ve got the snare on the upbeat, and that’s Caribbean, that’s derived from our rhythm,” explains Seroussi. “That’s coming from our world.” Jimenez remembers J Balvin and Nicki Jam telling her that “reggaeton is the new pop.” “Latin music is the new mainstream,” she adds.

And reggaeton is just one part of that – since Latin trap shares its rhythmic underpinnings with a large swathe of contemporary hip-hop, Spanish-language MCs are poised become an increasingly prominent part of the ever-expanding rap landscape as well. Like reggaetoneros, American rappers are fond of collaboration, so American and Latin trap are already intermingling. The week of December 16th, a remix of Farruko’s “Krippy Krush” featuring Nicki Minaj and 21 Savage was added into rotation by 14 mainstream hip-hop stations; Post Malone recently recruited Ozuna and Nicky Jam for a remix of his Number One hit “Rockstar.”

Executives say many more of these collaborations are in the works for 2018, and Sony Latin is planning to release an entire compilation pairing English and Latin acts. “You’re not talking about a fluke or a flavor of the month or ‘this is cute for now’ like it was back in the 1990s,” Seroussi asserts. “Our music is a part of the vocabulary of the mainstream world, and now the sky’s the limit.”

At least until another major, previously neglected music market gets connected to the global grid. “I think [Latin music] will be very dominant for the next couple years,” López says. “After, that you need to see how the development in Asia effects these charts. The revolution is coming.”

For Danny Ocean, the revolution is already here: In Mexico, Colombia and Chile, “Me Rehúso” ended up even more popular than “Despacito,” and earlier this month, Spotify announced that Ocean’s single passed “Despacito” as the Spanish-language song with the most week on the Global Top 50 chart. “We’re gonna start seeing the same pattern over and over with other songs,” Guerrero says. Except a few years from now, she predicts that a fast-rising track like “Me Rehúso” will be in Arabic or Mandarin.