Just a half hour before doors open for Harry Styles‘ first show of his debut solo tour, San Francisco’s Masonic is completely empty. Band and crew members are buzzing backstage, including Styles himself, not yet wearing the snazzy Gucci suit he would be seen sporting onstage just hours later.

Outside, more than 3,000 fans wait to see the 23-year-old perform in one of the smallest venues they may ever catch him in. They’re decked out in a variety of homemade merchandise as well as florals and pinks, a tribute to the singer’s fashion and album aesthetic.

“It’s funny because as this tour’s approached, I’ve been so nervous,” Styles’ music director and producer Tom Hull, known professionally as Kid Harpoon, tells Rolling Stone backstage while clutching a chalice of wine and wearing a pin that reads “Muna Has Possibly Talked to Harry Styles,” given out for free by opening band Muna at their merch table.

Until this tour, Hull’s work with other artists had been primarily in the studio, producing and co-writing for artists like Haim, Florence and the Machine and Shakira. He had been introduced to Styles through a mutual friend and ended up working on the songs “Sweet Creature” and “Carolina.” Thanks to their musical chemistry, Styles ended up asking Hull to help him put together a live show to perfectly embody the rootsy, rock-tinged sound of his self-titled album.

“I’ve gone into it not knowing what I’m doing [and] learning on the job,” he admits. “We’re all sort of approaching it with a fresh perspective because we haven’t done it before, but it [has us] keeping with what the record’s about.”

To help translate Styles’ solo sound, the first goal was to get a traditional band together. Guitarist Mitch Rowland had been plucked from a pizza shop where he formerly worked to become a major factor in the album and has joined Styles’ touring band as well.

“Mitch has never really toured like this before,” Hull says. “He’s learning on the road as he goes.”

Joining Rowland are keyboardist Clare Uchima, bassist Adam Prendergast and drummer Sarah Jones, all of whom had made their debut with Styles during the televised and small club performances around the release of his album. The band began to feel settled long before the tour launched, but Hull sees their relationship becoming further cemented with this trek.

“Bands become true bands on tour,” he explains. “Fans bought tickets [for this tour] before the album had come out, and the band wants to play to them. The idea is to cut our chops on this tour and get really good. Then next year, he’s got an arena tour.”

Still, on the first two nights, the band already felt like a cohesive unit. The first show perfectly bridged Styles’ past and present, demonstrating that he’s a star capable of holding his own outside of his boy band. Amidst the folk-y ballads and rousing rockers, he covered One Direction classics like “What Makes You Beautiful” and “Stockholm Syndrome” as well as one of his lesser-known writing credits: an Ariana Grande piano ballad titled “Just a Little Bit of Your Heart,” off the vocal diva’s 2014 album My Everything. “Honestly, I didn’t know he had written it,” Hull notes. 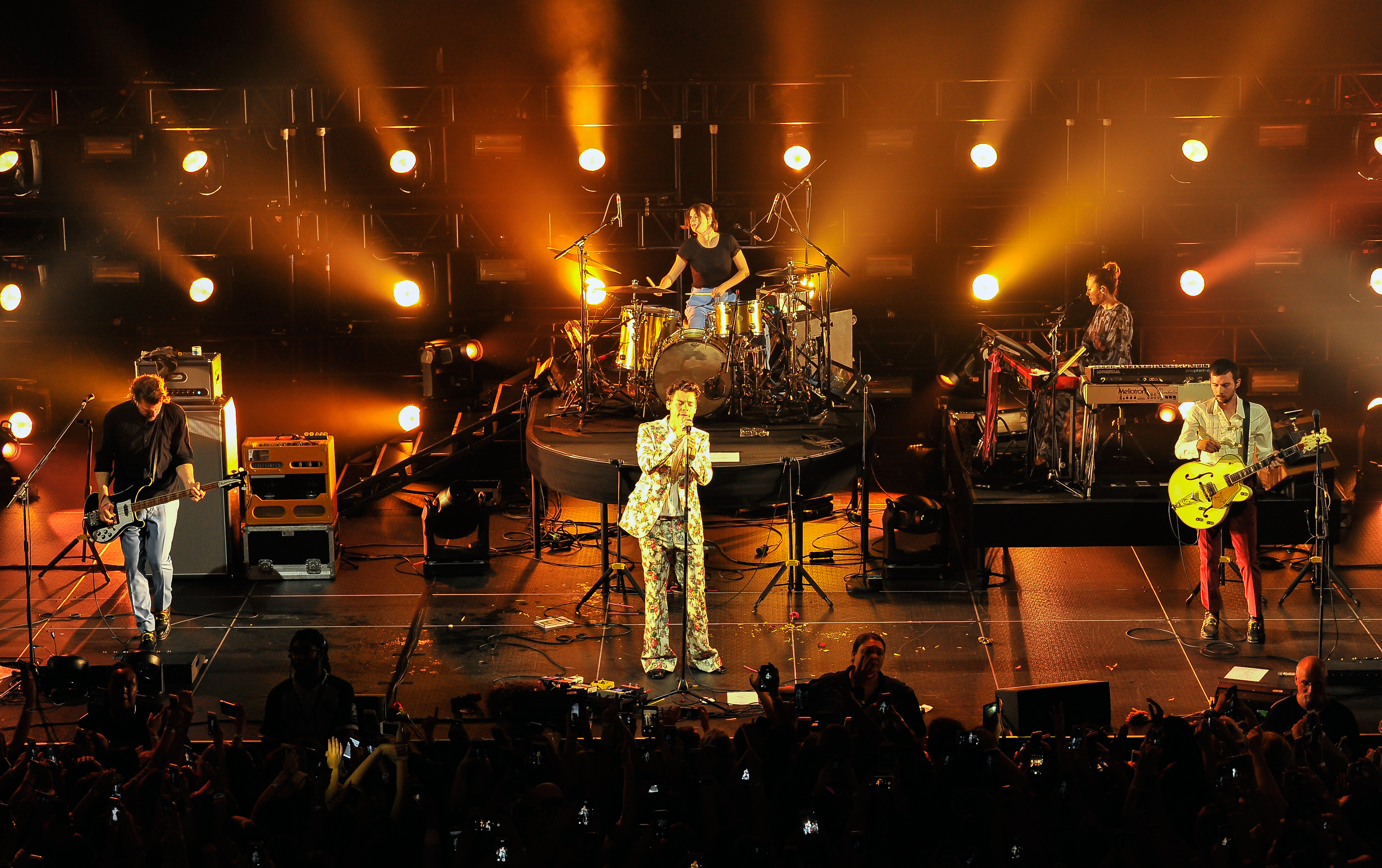 Styles has released just 10 songs under his own name, but the vast amount of material he had from his pre-solo career helped to fill out the set. “When the Strokes first came out, their album was 35 minutes long and they had to do Talking Heads songs to fill out the set,” he adds. “It’s quite good to be able to do [Harry’s] record and have other songs in the set because he’s written so much music with [and outside of] One Direction. We’re presenting it in a way that sort of reflects the record and where he’s at now, which feels unique to Harry.”

In the months leading up to the tour launch in San Francisco, Hull, Styles and good friends of the latter sat around and began to formulate a vision. “It was like ‘Why don’t we do this? That would be fun,'” Hull describes of the process. “The thing that’s incredible about Harry that I don’t think people realize as much yet is that he drives it all. It’s very much his taste. He’s very musical; he plays guitar, plays piano and writes songs. He loves music.”

For Hull, working with Styles has disproven a common misconception of the pop megastar, one who is governed by his producers and label. Instead, the director paints a picture of a huge music nerd, one who is particularly passionate about classic rock and country, getting to explore his taste on his own terms.

“That was the hard thing, I think, in [One Direction] before,” he adds. “You’ve got a bunch of lads who all have different tastes in music and have their own personalities. Obviously it’s clear they’ve all done something different [as solo artists].”

Styles has been eager to share his tastes with Hull and the rest of the group. “He’s turning me on to music I’ve never even heard of from like 1978, and he’s texting people in the band ‘Have you heard this? Have you heard that?'” Hull says, noting that on days off they go to guitar shops, looking at gear and “really geeky stuff.”

“For someone where he’s at, he just absolutely adores it, and it’s inspiring for everyone underneath.”

The next night in Los Angeles, the crowd is even more energetic as they filter into the Greek through the trees and hills of Griffith Park. A few glitches cropped up at the San Francisco gig — run-of-the-mill sound problems and a less expected fire alarm triggered by the theatrical smoke used during Muna’s set. For the Los Angeles show, the band feels even stronger and more focused. 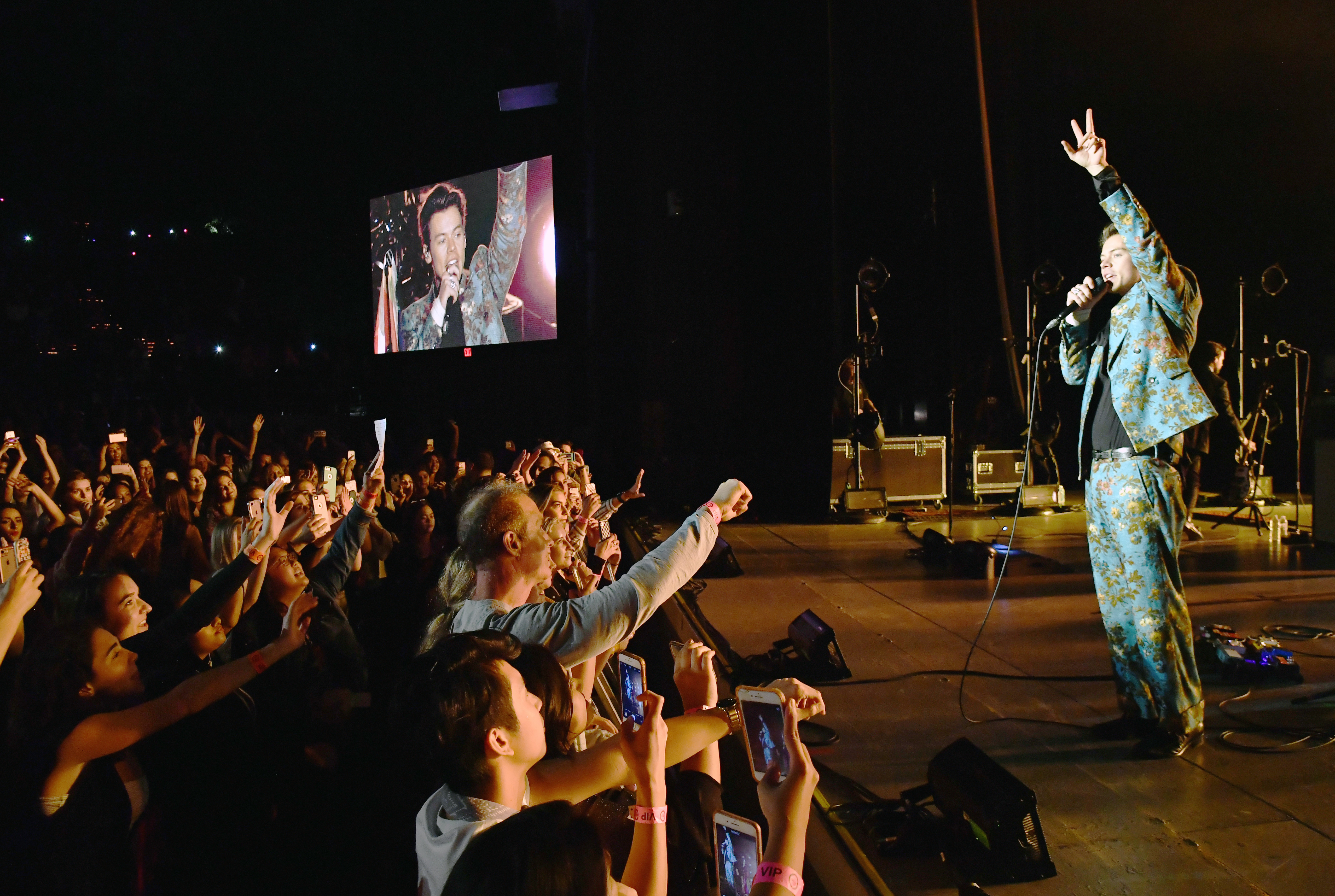 “There was a bit of uncertainty, but I think everyone’s really happy and buzzing,” Hull updates from the Greek’s VIP section. That night, they were up against the added pressure that comes with a celebrity- and legend-filled audience, featuring everyone from Emma Roberts to Mick Fleetwood and Styles’ former groupmate Niall Horan. “You want to keep improving and getting it better. It feels like the first gig still.”

Even though he would perform a cover of Fleetwood Mac’s “The Chain” in front of Fleetwood himself, Styles was even looser at the Greek, dropping in cheekier ad libs and at one point halting “Kiwi,” the closer of the main set before his encore, to tease the troves of primarily female-identifying fans by highlighting the “I’m having your baby” line from the chorus. According to Hull, Styles was already prepared to start changing up the set list by night two, something the entire team collectively decided against as they were just starting out. (In Nashville the following weekend, however, they replaced the cover of “Stockholm Syndrome” with a rendition of Little Big Town’s “Girl Crush,” the first of many possibly new covers to be introduced on the road.)

The cover of One Direction’s most memorable hit “What Makes You Beautiful” remains the most surprising element of the show, especially since young solo artists typically tend to distance themselves from their pop pasts on the road to a more “mature” sound.

“At first, he was definitely cautiously up for it,” Hull says of the decision-making process. “I feel like those [One Direction] songs are brilliantly written songs, and obviously it was a moment where we had a conversation. Beyoncé does Destiny’s Child songs, so we were like ‘Let’s do some of the songs that people will all know and everyone will love.'”

Styles’ band made sure to adapt the tune to fit the flow of the show. Uchima suggested a “Ray Charles–y vibe” for the keys, while drummer Jones added a “Motown-y beat” during rehearsals, and the group continued tinkering until they found the perfect balance of old and new.

“We all have so much respect for what put him here,” Hull adds, emphasizing Styles’ own desire to not fully let go of his past. “It’s an important part of it. You can’t underestimate his fans.”