In April 1990, the classic lineup of Guns N’ Roses played its final show. The occasion was the nationally televised Farm Aid concert, a disastrous set that included, among several bizarre highlights, Steven Adler drunkenly belly-flopping in the general direction of his drum set only to miss by four feet, and Axl Rose ending the live broadcast with a climactic “Good fuckin’ night.” It was the mark of a band breaking apart.

Amazingly, though, the imploding GN’R were in the midst of an artistic surge. One of the songs played at Farm Aid (in a version hampered by Adler’s inability to learn it) was “Civil War,” a sweeping epic that would eventually open the second disc of the massive 30-song, two-and-a-half-hour opus they were hard at work on throughout 1990 and ’91. Slash would later liken Use Your Illusion I and II to the Beatles’ White Album (though “maybe not as good”), a titanic mix of gritty ragers, passionate rock-opera ballads and decadent screeds – from the failed-relationship triptych of “Don’t Cry,” “November Rain” and “Estranged” to the rock-critic indictment “Get in the Ring” to the misogynistic double-header of “Bad Obsession” and “Back Off Bitch.” “Thirty-five of the most self-indulgent Guns N’ Roses songs,” Slash said. “For most bands, it would take four to six years to come up with this much stuff.” Like the White Album, it was brilliance created amid collapse.

The band began seriously considering a follow-up to Appetite for Destruction in the summer of 1989, during a fruitful writing session that took place in Chicago. Izzy Stradlin, who had recently sobered up and often traveled separately from his bandmates, was especially productive. “Izzy has brought in eight songs – at least,” Rose said in 1990. “Slash has brought in a whole album. I’ve brought in an album. Duff [McKagan] knows everybody’s material backwards. So we’ve got, like, 35 songs we like, and we want to put them all out, and we’re determined to do that.” Discussing his newfound sobriety, Stradlin reflected, “I just reached a point where I said, ‘I’m gonna kill myself. Why die for this shit?’ ”

The Chicago meeting spawned, among other songs, “Estranged” (about Rose’s divorce from Erin Everly, daughter of rock & roller Don Everly), the rocker “Bad Apples” and the bondage jaunt “Pretty Tied Up.” While there, they also fleshed out “Get in the Ring,” the frustration anthem “Dead Horse,” McKagan’s tribute to deceased New York Doll Johnny Thunders “So Fine” and the doomy, 10-minute headbanger “Coma,” notable for Rose’s most dramatic and literal lyric in the GN’R catalogue: “Pleeease understaaand me.”

GN’R began recording in earnest in January 1990, a little over a year after the release of Lies, with an attempt at capturing “Civil War,” a tune they’d sketched out in 1988 and later donated to a compilation benefiting Romanian orphans. Immediately, Adler’s drug problem became an insurmountable obstacle. Addicted to heroin, he began nodding off at his kit. “I said to Slash, ‘Dude, I’m so sick that I can’t do it right now,'” the drummer once recalled. “And he said, ‘We can’t waste the money. We got to do it now.’ ”

After consulting with lawyers, the bandmates put Adler on probation, and within a matter of months, they’d kicked him out altogether. “He was so messed up he couldn’t pull off the drum tracks,” Slash said. “And he would lie to us [about getting clean]. We’d go over to his place and find drugs behind the toilet, under the sink.” 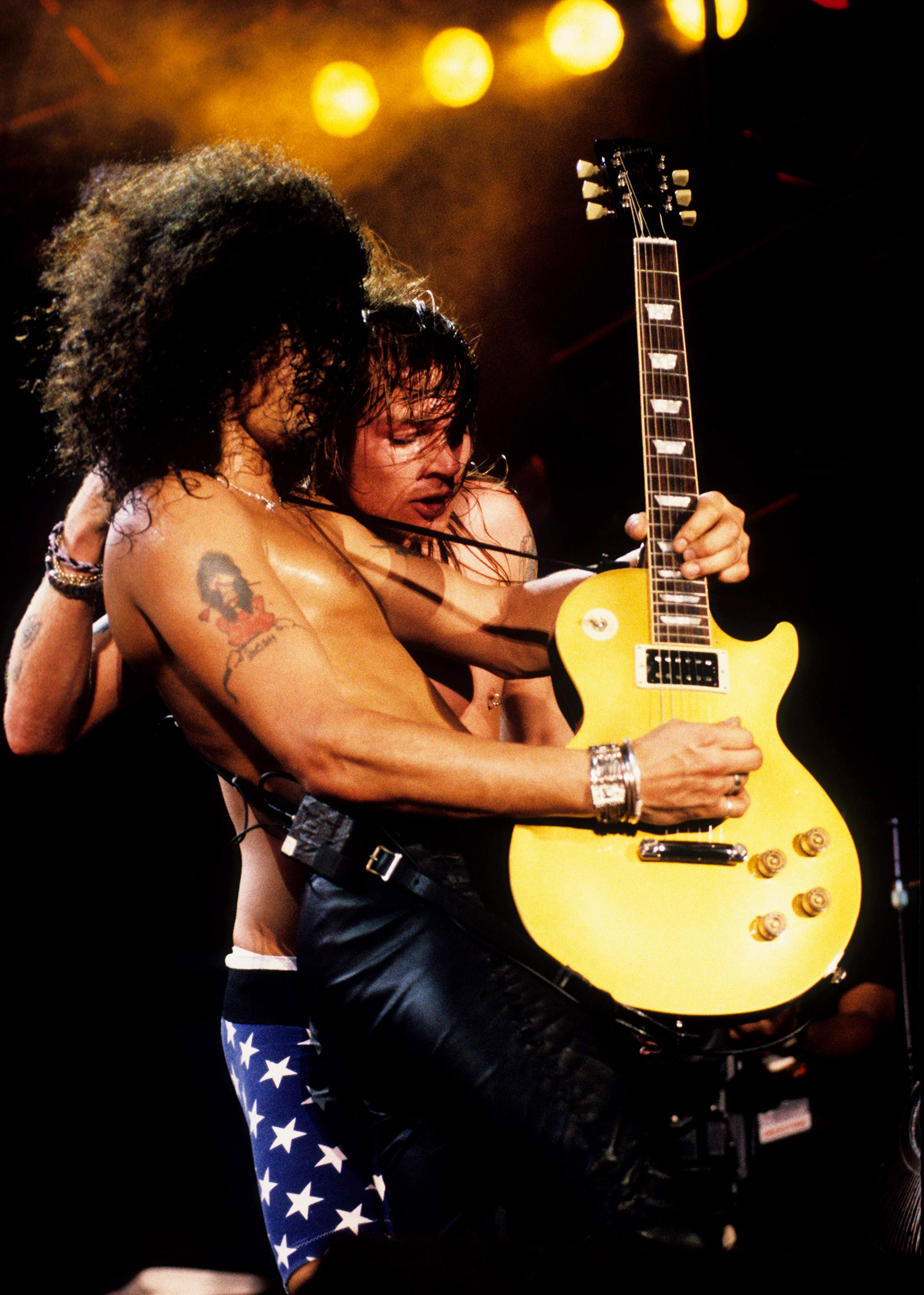 Nevertheless, the band pushed forward. It solved the drummer problem by recruiting Matt Sorum, of hard rockers the Cult – a band whose affinity for Stones-y riffing and trippy lyrics put them in the same league as GN’R at the time. “He was fucking amazing,” Slash wrote in his autobiography, recalling a Cult show he attended in April 1990.

Around the same time, Rose brought in keyboardist Dizzy Reed. Reed had known the group since its earliest days, when a band he was in practiced in a space next to GN’R’s studio. In early 1990, he called Rose in a panic. Reed, who’d previously auditioned for GN’R, told the singer he’d soon be homeless; Rose offered him a job. “They fucking saved my life,” Reed said. Reed would become the only musician other than Rose to stay in the band in the years leading up to its current reunion.

With the new lineup in place, work continued more smoothly. The first tune they recorded with Sorum was a cover of Bob Dylan’s “Knockin’ on Heaven’s Door,” for the soundtrack to the 1990 Tom Cruise racing movie, Days of Thunder. “We would get to the studio at noon,” Sorum recalls. “We were serious about the work ethic. We’d cut a song and then take a break at one of our favorite bars for a drink or two and then cut another track or two. We never did a lot of takes of a song. We’d get it in two to three takes.” They also recorded a number of covers during the sessions, some of which showed up on “The Spaghetti Incident?”; among them was a version of Wings’ James Bond anthem “Live and Let Die,” which Rose once called “Welcome to the Jungle 2.”

Digging deep into their history, Guns revived several holdovers from the Appetite for Destruction days, and earlier. Even though Slash would later say the bass-thwacking rocker “You Could Be Mine” was too reminiscent of Appetite to fit the mood of the Illusion albums, it would eventually appear in the 1991 movie Terminator 2 and be released as a single. There was also the punky, two-and-a-half-minute “Perfect Crime,” which Stradlin had brought to their first-ever preproduction session.

Then there were Rose’s ballads, ostensibly kept off Appetite so as not to soften Guns N’ Roses’ image. Rose once claimed that “Don’t Cry” was the first song he’d written for the band. “It was [about] a girl that Izzy had gone out with,” Rose said, “and I was really attracted to her, and they split up. I was sitting outside the Roxy, and I was really in love with this person and she was realizing this wasn’t gonna work – she wanted to do other things, and she was telling me goodbye and I sat down and just started crying, and she was telling me, ‘Don’t cry.’ The next night, we got together and wrote the song in five minutes.”

The band ultimately put different versions of “Don’t Cry” on each of the Use Your Illusion discs, an “original lyrics” version on the first volume, retelling Rose’s story, and an “alternate lyrics” take done impromptu in the studio, in which the breakup is dealt with more forcefully. “I prefer the new version because the original is kind of like a nostalgia piece for me,” Rose later recalled.

Another song Rose had been holding onto since at least 1986 was “November Rain.” In 1988, he effusively told Rolling Stone about how proud he was of the track, threatening, “If it’s not recorded right, I’ll quit the business.” The singer would later explain that “November Rain” was “about not wanting to be in a state of having to deal with unrequited love.” In the years leading up to the Illusion sessions, they’d demo’ed it with guitar and solo piano – one version was 18 minutes long – but the song didn’t come into its own until Rose workshopped it in the studio, carefully creating tones to replicate a full symphony on his keyboards.

“We listened to Elton John for inspiration for the drum fills and overall tone,” Sorum says. “I vividly remember sitting with Axl listening to [John’s] ‘Don’t Let the Sun Go Down on Me’ and Axl pointing out the style of the tom fills.”

For the spoken-word sections of the uptempo rocker “The Garden,” Guns N’ Roses turned to an old friend. Shock rocker Alice Cooper had taken the band out on his Nightmare Returns Tour in 1986, and Rose, Slash and Stradlin accompanied him on a 1988 re-recording of his hit “Under My Wheels.” A couple of years later, Cooper got a call from Rose at two in the morning.

“I’m used to doing things in an hour,” Cooper says. “I know Axl likes to take his time, but if you can’t get a vocal like that in an hour, there’s something wrong. So I told him upfront, ‘I have a tee-off time tomorrow at seven. We’re doing this in about an hour.’ I did it in two takes. I don’t know how long it took him to do all of his takes, but it ended up sounding really, really good.”

In an omen of the darkness surrounding the band, police discovered a dismembered arm and head in the dumpster behind the studio where GN’R were recording. Stradlin would reference the incident in the sinewy “Double Talkin’ Jive.” “Izzy had gone back to Indiana, and when the police found the body parts, he flew back out and sang the opening line and the final vocal,” Sorum recalls.

Violence seemed to follow Guns N’ Roses out of the studio, too, as they toured while still working on the records. Rose’s wife Erin divorced him in the middle of recording Use Your Illusion, accusing him of assault, and the band toured frequently between sessions, occasionally inciting riots by walking offstage as Rose had done in St. Louis after a fight with a fan. “We all gathered in the dressing room … we’d open a door and there was yelling, we’d open another and see people on stretchers, cops with blood all over them, gurneys everywhere and pandemonium,” Slash recalled.

“After we left the stage, the crowd turned into an angry mob,” Sorum recalls. “Our crew was defending our gear through flying chairs and debris as riot squads arrived with tear gas. We tried to go back onstage but ended up in a van and drove to Chicago, still in our stage clothes, not really sure of the outcome of what had transpired. It was a ride I’ll never forget. Only when I turned on the news the following day to see the damage and destruction did I realize what had happened and the frenzy that had injured many of our fans.”

When they were released in September 1991 – a week before Nirvana’s game-changing LP Nevermind – the Use Your Illusion albums were immediate hits, selling more than 14 million copies combined. “There’s a ton of material we want to get out, and the problem is, how does one release all of it?” Slash said of the unusual twin-disc offering. “You don’t make some kid go out and buy a record for $70 if it’s your second record.”

The gambit made history: No other artist had put out two records on the same day and claimed the top two spots on the Billboard album chart before. “We poured everything into those albums,” Sorum says of their creation. “The music was all that mattered.”