Nearly 15 years after his death, the legacy of George Harrison and his fellow Beatles continues to reveal itself. At the moment, it’s in the form of a rare black-and-white photograph in the hands of Olivia Harrison, wife of the late singer-guitarist: It shows the early Beatles posing with their instruments in a barren stretch of Liverpool, England, dressed in matching suits but still looking tough behind their smiles.

“Look at the tones in John’s face,” Olivia says, marveling at the image of a young John Lennon. She is sitting with family friend Nicholas Roylance, publisher at U.K.-based Genesis Publications, who hands her a batch of smaller pictures of George, capturing him as both a Beatle and solo artist. “Where did that come from?” Olivia says, examining one of the pictures. “That’s super cute.”

Her ongoing mission to excavate, catalog and share the long musical history of her husband is never-ending, and has already led to her co-producing the acclaimed 2011 documentary George Harrison: Living in the Material World, directed by Martin Scorsese. Now comes the expanded reissue of his 1980 book, I Me Mine, a casually intimate memoir and collection of lyrics. The book and a meticulously crafted vinyl box set of Harrison’s 12 solo albums arrived in time for the 74th anniversary of Harrison’s birth, which fell last Saturday.

“I have an overdeveloped sense of duty,” says Olivia, sitting in the Santa Monica offices and studio where her son Dhani Harrison and collaborator Paul Hicks create music for TV and film. “It obviously means everything to me.”

For the book, that meant locating handwritten lyrics for songs George created for the five albums he recorded after the memoir’s original release and before his death from cancer in 2001. She found the material in cupboards, piano benches and throughout Friar Park, the playfully Gothic estate the onetime Beatle purchased in 1970 and where Olivia still resides. 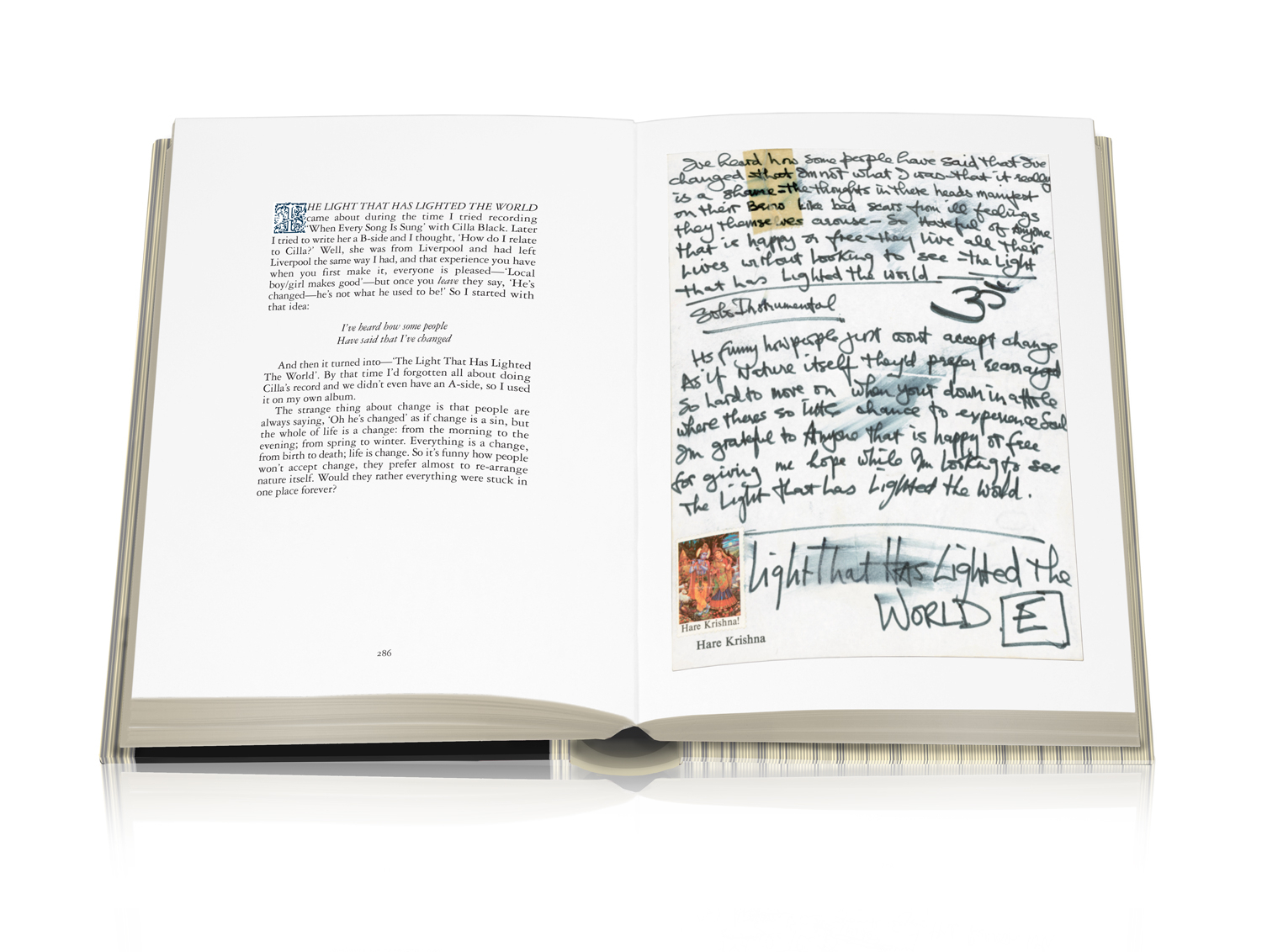 “The lyrics were all over the house,” she says. One piano bench used regularly by keyboardist Billy Preston during visits to George’s home studio was filled with 20 years of work, and one desk was loaded with lyrics and Polaroid photos just from 1973. “It was pretty much a revelation. There would be spiral-bound notebooks. Some of them would go back to the Sixties. Others would be around the [Traveling] Wilburys time. Some were in the Eighties.”

The book includes a handful of lyrics never recorded, including something from the early Seventies called “Hey Ringo,” which includes the line: “Hey Ringo, there’s one thing that I’ve not said/I’ll play my guitar with you till I drop dead.”

“I was really moved because I’d never seen it,” Ringo Starr told Rolling Stone, minutes after seeing the song for the first time during a weekend VIP celebration of the book at Subliminal Projects in Los Angeles. “He was my best friend. I had two other great friends, and three brothers. We were pals.” 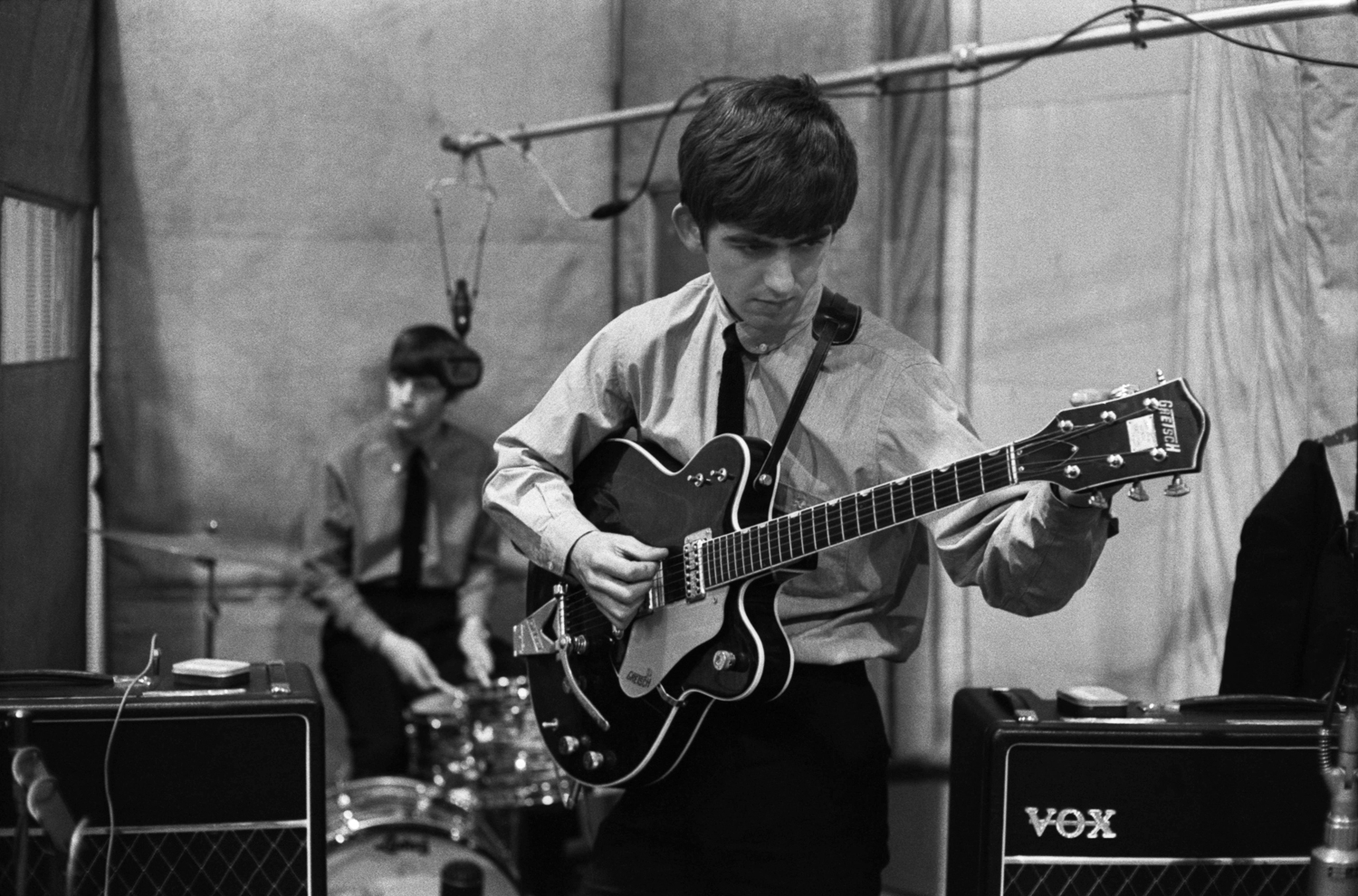 The party Saturday was the opening of a Harrison pop-up store at the gallery of artist Shepard Fairey, whose portrait of Harrison is the reissued book’s new cover. The event drew a crowd of invited friends and admirers that included Eric Idle of Monty Python, Joe Walsh, Jakob Dylan, Black Sabbath’s Geezer Butler, the Cult’s Ian Astbury, “Weird Al” Yankovic and the Bangles’ Susanna Hoffs and Debbi Peterson. Fairey was the night’s closing DJ, spinning records by Beatles contemporaries on limited-edition turntables decorated with his portrait of Harrison in the vivid Buddhist colors of orange, burgundy and ochre.

“For George, being spiritual and also a rabble rouser, it’s a real awesome sweet spot for me to get to be associated with,” said Fairey, wearing a T. Rex T-shirt with a photograph shot by Starr. “The Beatles and George Harrison are undeniable. If you don’t like the Beatles, it’s like saying you don’t like a flower or a sunset or the ocean. You’re being contrarian in a way that makes you someone I don’t want to hang out with.”

On the walls were Fairey portraits of the former Beatle and facsimiles of Harrison’s original handwritten lyrics from throughout his career. There were words from “Behind That Locked Door,” scribbled onto a blank record sleeve, and the water-smudged lyric to “Beware of Darkness” (both from the 1970 classic All Things Must Pass).

One lyric, for “The Pirate Song,” was co-authored by Idle, who collaborated with Harrison on several films and music videos. Harrison became a producer and founded Handmade Films initially to fund Python’s The Life of Brian, even mortgaging Friar Park to raise the money. “His spirit is always around,” Idle told Rolling Stone. “He was like the best friend you ever had. You couldn’t imagine a man so lovely – to everybody.” 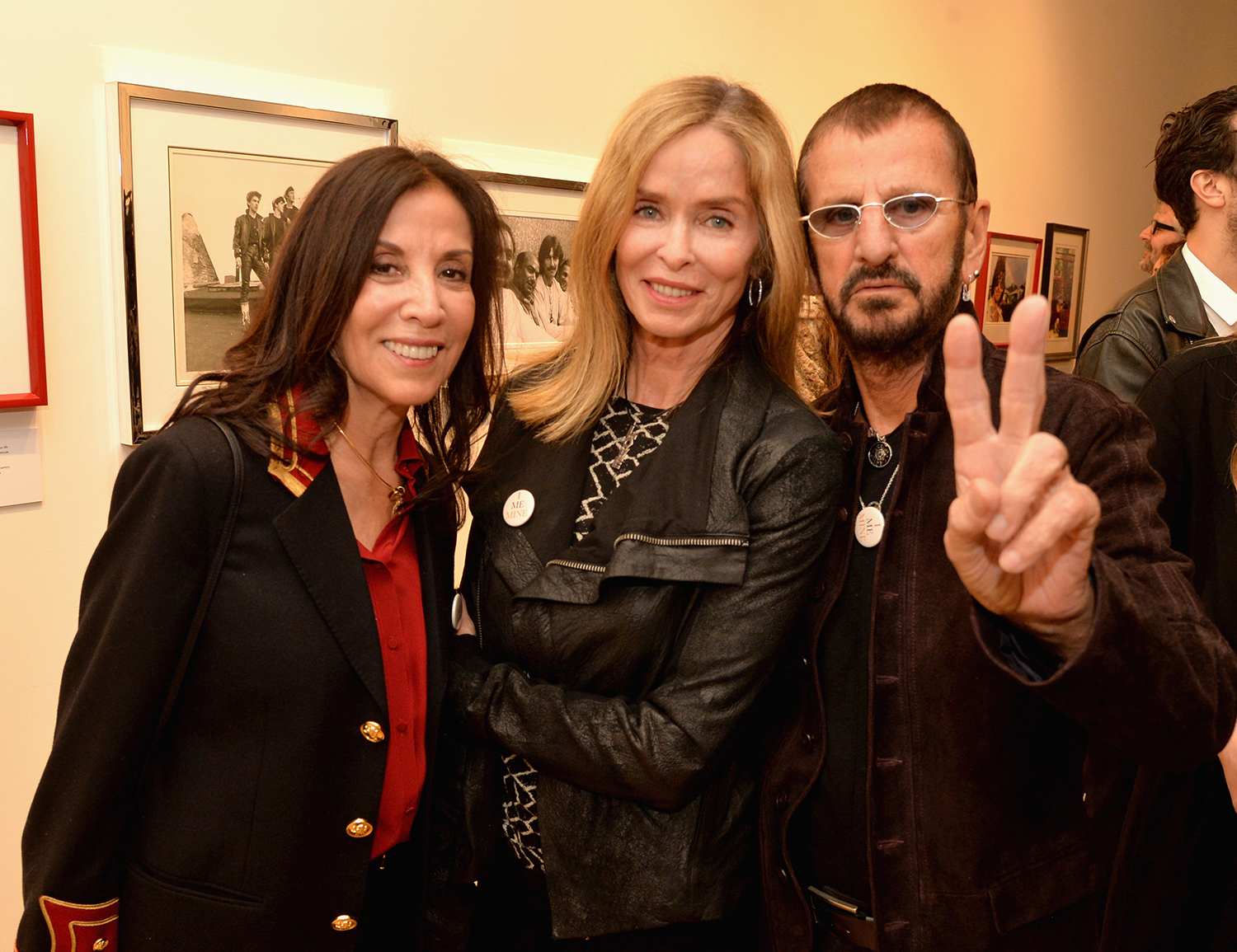 Accompanying Starr to the gallery was Joe Walsh, both friend and brother-in-law to the Beatles drummer. (Walsh is married to Marjorie Bach, sister of Barbara Bach, Starr’s wife since 1981.) Years before his time in the James Gang and the Eagles, Walsh saw the Beatles perform at Shea Stadium in New York and was inspired. “I was screaming right along with all the rest of the girls,” Walsh said.

He met Harrison a few times, and played alongside him at the Royal Albert Hall in 1992, and was an open admirer of his guitar playing. “When you sit down and try one of his leads, the technique is wacky,” he said of Harrison. “The parts he would come up with, they don’t make any sense, but they’re brilliant. His choice of notes makes your hand go to a different position than anybody would ever think of. You really realize how special he was.” 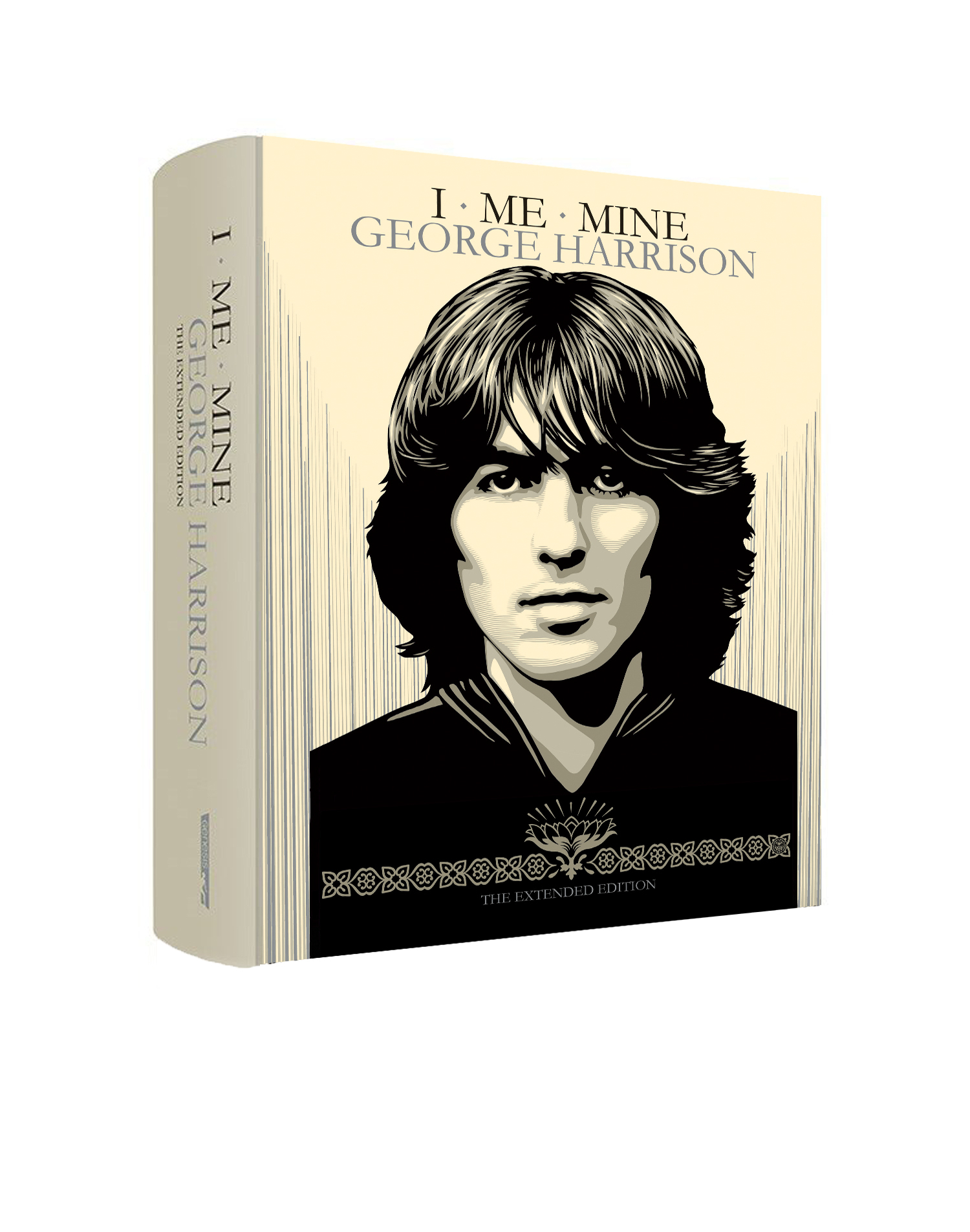 The timing of both the book and the album box set to Harrison’s 74th birthday was a happy accident, says Olivia (who returned to Subliminal Projects the next day for the public opening, talking to fans lined up down the street). The new version of I Me Mine is published by Genesis, who released the original edition in 1980. Harrison and the late Genesis founder Brian Roylance were great friends, and current publisher Nicholas Roylance was a childhood friend of Dhani and spent many days around the Harrison home.

“Some of the fondest memories of my life were those years they were putting the book together,” Olivia said. “It made George really think about his songs.”

Midway into the party at Subliminal Projects, Olivia Harrison grabbed a mic and thanked the friends gathered, and talked about updating the book. Behind her were Fairey and Dhani Harrison. “There was 20 more years of songs,” she said. “I didn’t feel it was right to not let those songs see the light of day.”

Standing nearby was Starr, whom she described as Harrison’s “best friend in the room.” There was applause, and then Starr flashed two peace signs and offered another farewell for his old friend: “Let’s have peace and love for George.”