It was a beautiful night for Mashrou’ Leila. Over 35,000 concertgoers showed up to see the Lebanese band and two other Arab rock groups perform at the daylong Music Park Festival in an upscale suburb of Cairo, Egypt, late last September. During their set, spotlights glittered in carnivalesque colors and mega-screens displayed images of a woman wearing a hijab doing interpretive dance – a clip from the music video for their popular song “Roman” – as they strutted through their funky, violin-adorned, socially-engaged indie rock.

During the show, fans were photographed waving a rainbow flag – the universal symbol of gay pride – in solidarity with the group. Singer Hamed Sinno is openly gay, and the band has long been outspoken about LGBTQ issues in their music and public statements. In the days afterwards, the images circulated on social media and Egyptian TV commentators and newspapers turned it into a public scandal. The local musicians’ syndicate banned Mashrou’ Leila from playing in the country, and Egyptian authorities launched what activists and human rights observers are now saying is the worst-ever crackdown on the country’s gay community, arresting dozens on “debauchery” charges.

Inside the Strange Saga of a Cairo Novelist Imprisoned for Obscenity

“The concert itself for us was just magical,” Sinno recalls to Rolling Stone with a heavy sigh. “It felt like such a loving, happy audience. It’s been really difficult, sort of hitting that high and then having it get perverted into what it is now.”

In a region where it’s rare and often risky to be open about one’s non-heteronormative sexuality or gender, Mashrou’ Leila have offered visibility for queer cultural expression. One of the most popular rock bands in the Middle East, they’ve written bold and compassionate songs that address gender and sexuality in addition to politics and other topics, and while they’ve faced online backlash, concert bans and even death threats, they’ve always stood their ground. “My life spent with rights mortgaged off to your sentiments / My history erased from our books like they were yours to claim,” Sinno sings in their song “Tayf” (“Ghost”), a solemn but defiant tribute to a Beirut gay bar that was shut down by Lebanese authorities in 2013.

But Sinno has struggled to process this painful ordeal: He wasn’t prepared for his fans to come under attack, too.

“For a couple days after, I really started to question everything we’ve been doing for the last 10 years,” Sinno says, speaking by phone from a recent tour stop in San Francisco. “A big part of what we do and why we address politics and gender and class and whatever – be that through our music and through our positions in the public eye – a big part of that is about trying to create sort of a cultural roster for people to identify with and feel emboldened by. And it felt like for a few days, we had to doubt whether we were actually doing that, or if we were just feeding the trolls.” 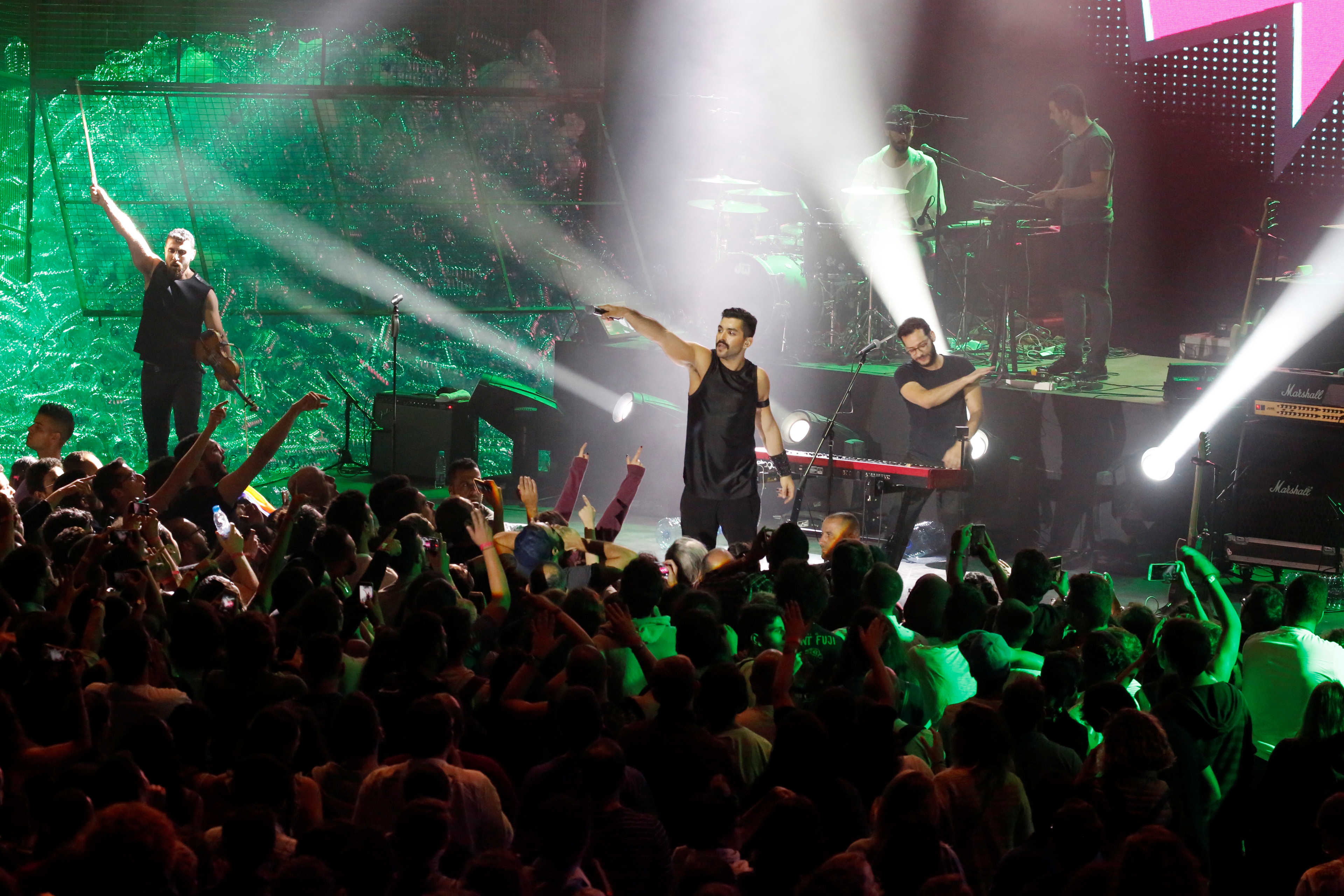 Mashrou’ Leila (which means “A Night Project” in Arabic) formed in 2008 at the American University of Beirut. Over the years, the quintet has come to be associated with a handful of Arab indie bands carving out an alternative lane for young music fans, eager for fresh sounds in the wake of the 2011 Arab Spring – and the band has been making an impact. They have over 500,000 Facebook followers and their songs have gotten millions of YouTube hits. They’re currently staying in the U.S., making tour stops across the country while teaching a one-day-a-week, semester-long course on the intersection of music and politics in the Hagop Kevorkian Center for Near Eastern Studies at New York University.

The crisis in Egypt broke out right as the band arrived in the U.S. to start the course – they ended up rewriting materials for the first class, turning their situation into a case study for the NYU students.

“We thought it was sort of important for them to look at that as one situation and to see how the media that’s generated around a musical event can more often than not redefine what that musical event is,” Sinno says.

Mashrou’ Leila’s fourth album, 2015’s Ibn El Leil (Son of the Night), is a layered opus of funky bass, propulsive dance beats, orchestral arrangements and literary references. In “Tayf,” Sinno sings in a smoldering baritone, weaving a poetic call to resistance in Arabic while the rest of the band drives the message home with a chugging four-to-the-floor beat and a spare melody from violinist Haig Papazian. It’s one of many examples of the band negotiating issues of identity and politics through their immersive productions, eye-catching music videos and passionate live show.

Prior to the concert in September, the band had played many times in Egypt, receiving positive reviews from local bloggers and media outlets. But as they’ve built a huge fan base, they’ve also faced backlash. In 2016 they were barred from performing in Amman, Jordan, and this summer Jordan’s Interior Ministry cancelled yet another planned performance after members of parliament protested Sinno’s sexuality. It’s experiences like this that Sinno says make it that much more important for them to keep pushing forward.

“The amount of hate that you would be able to see on social media is a testament to how necessary it is to constantly have that conversation in the public domain,” Sinno says. “We’re talking about victimless actions between consenting adults, and this kind of hate is completely irrational. So on the one hand, that debate obviously needs to be happening. But on the other hand, it’s also really important for us and for the LGBTQ-plus community to have access to images of itself that are self-authored, that are not coming from a place of hate and condemnation, that are just about people having their lives and doing their work and surviving.”

Egypt is a conservative country with a predominantly Muslim population, but it’s also a major cultural center for the Arab world. With a population of 20.4 million people, the capital, Cairo, is home to a thriving underground scene of musicians, artists and other socially-engaged young people, and in the months following the 2011 revolution — which saw the overthrow of former president Hosni Mubarak — the LGBTQ community reportedly enjoyed a period of openness in areas like Cairo’s downtown, full of street cafes and rooftop bars.

But in 2013, Egypt’s elected leader, Mohamed Morsi, was ousted in a military coup led by current president Abdel Fattah al-Sisi. As the government secured control over the country, police began to crack down on the gay community, launching a series of raids and arrests while pro-government media outlets stoked public sex scandals.

Between September 19th and October 15th, Abdel Hameed says 70 individuals have been arrested in the latest crackdown – including two concertgoers who are alleged to have held up the pride flag at the Mashrou’ Leila concert. Twenty-seven have already been convicted with sentences ranging from six months to six years in prison, and seven have been acquitted or released. The two who were charged with raising the pride flag are facing more serious charges under Egypt’s national security prosecution, Abdel Hameed says. 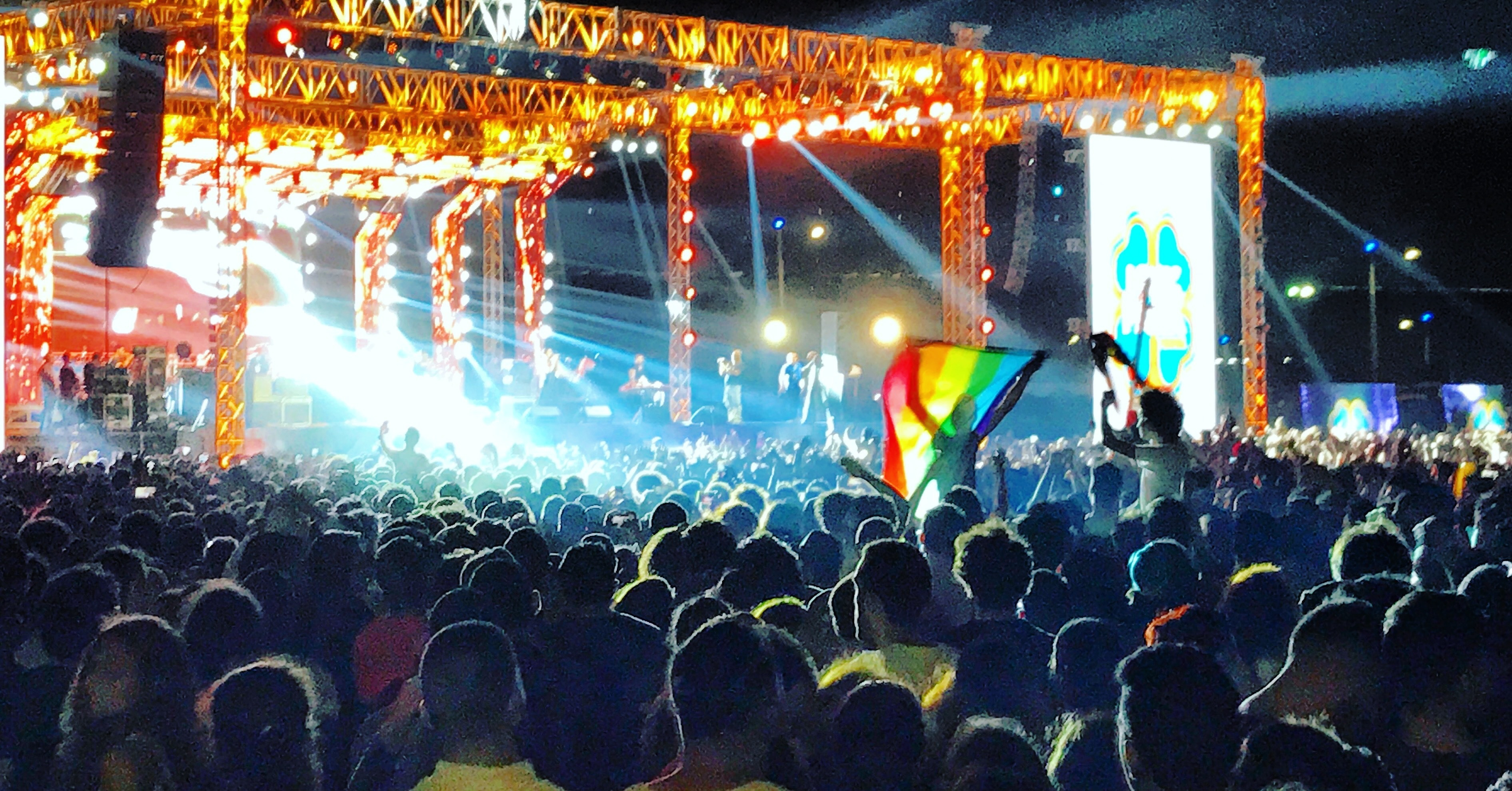 “I can’t find a justification for this whole thing. I still don’t know what is so provocative of people waving a flag,” Abdel Hameed says. “This is not [an] ISIS flag.”

Speaking by phone from Beirut, one LGBT activist who’s been coordinating with others in Egypt – and who asked to not have his name used for fear of reprisals – says many queer people in the country have come to watch out for each other, with activists hosting workshops on how to stay safe while using apps and social media.

“People have their own circles, their own networks. People take care of each other,” he says.

Sinno says he and his bandmates first heard murmurs of something going on shortly after performing their concert at Music Park Festival. A few days later, they were en route to New York from Beirut when news of arrests started blowing up in the Egyptian media and on their Facebook page.

“By the time we got off the plane everything had sort of gone to shit,” he says. “We automatically got in touch with as many activists and reporters that we know in Egypt on the ground, and no one was able to verify anything for a few days. People didn’t know if the arrests were actually happening.”

At first the band was hesitant to comment on what’s going on, worried that it might make the situation worse, and then when it became clear that the situation was getting worse they released a statement condemning the crackdown. In recent days, the band has been touring and teaching their NYU class, while in Egypt the government’s media regulatory body has issued a statement barring local media from depicting LGBTQ people, except in cases where they “repent” for their behavior. For Sinno, all of this makes him reflect on his role as an openly gay artist making music in the Middle East and North Africa – feeling a sense of responsibility towards LGBTQ fans, while also feeling the need to be an artist and person on his own terms.

“Do I get that feeling of responsibility? Yes and no. I mean, I think it’s something that’s impossible to avoid once you’re in the public eye, right? And I acknowledge that and I try to honor that as much as I can,” Sinno says. “But at the same time it’s also something that, like, you need to figure out how to not carry it with you the whole time, because it becomes impossible to write anything the moment you feel like the rest of the world is implicated. You lose your voice the moment you start trying to speak for other people.”

“I realize completely that this has nothing actually to do with the band,” Sinno adds, his voice grave as he reflects on the situation. “This is essentially about our governments being regressive and refusing to stop taking away peoples’ rights that are their rights. This isn’t about the band at all. But it still feels like it is.”