In 2014, attendance had fallen sharply at Trópico, a Mexican music festival held in the resort city of Acapulco. The festival was only in its second year, and after 43 students disappeared in the nearby city of Iguala a few months prior, a large number of festivalgoers had the same thought: stay home.

But at one point during the three-day festival, organizer Pepe Bezaury recalled an atypical moment. The Rapture’s Luke Jenner, LCD Soundsystem’s Pat Mahoney and Hot Chip’s Alexis Taylor, among others, took to the stage before going silent. David Byrne then asked attendees to count to 43 in honor of the students, who the attorney general’s office says were turned over to cartel members by local police.

Festivals Are Back - Here Are the Best Festival Backpacks to Wear

“From something really awful, something beautiful happened — that the 3,000 people that were there, we had a positive thought that we have to come together and work and move forward and try to end this impunity,” Bezaury tells Rolling Stone.

It’s a moment that also shows how Mexico’s multi-day mega-bashes often exist alongside, and despite, its harsh realities.

Trópico, a popular dance event that has featured sets by international DJs like Bonobo and Nicolas Jaar, regularly draws a crowd of some 7,500 attendees. It also creates a unique scene: Three days of music and drug-fueled revelry in the heart of Acapulco just miles away from neighborhoods devastated by drug-related violence. In 2016, there were 918 killings, making it Mexico’s most deadly city for nearly five straight years. In 2017, the overall number of homicides in the country rose nearly 25 percent to 25,324, the most violent on record.

While President-elect Andres Manuel Lopez Obrador floats the idea of offering amnesty to nonviolent criminals and promises to restore peace after taking office on December 1st, homicides during the first six months of 2018 are up another 13 percent, the interior department said in July.

At the same time, a large number of people are completely untouched by crime – and the country’s violence doesn’t get in the way of most festivals. “All the things that have happened have made it so that opportunities don’t develop and it’s a pretty poor city,” Bezaury says about Acapulco, where he recalled his younger self eating ceviche acapulqueño and looking out at the city’s crescent-shaped bay before crime surged. “The idea was to return it to its best self … those golden years of Acapulco, through the event.”

In recent years, Mexico’s festival circuit has grown exponentially, with live music events of all kinds dotting the country. A 2017 report on the electronic industry notes Mexico hosts at least three of Latin America’s largest dance festivals, while boutique events like Trópico, NRMAL, Vaivén and Comunité have grown by the handful. “Everything that we are building is our cultural, musical legacy,” says Hugo Diaz, an organizer of the Ceremonia festival, which featured Beck, St. Vincent and King Krule alongside Mexican artists, in April. “We believe our role is to give space so that artists grow.”

Mario Romero, a founder of Bahidorá, a festival recently headlined by Kamasi Washington, says such events help to promote Mexico. “We think it’s a very positive message to give to the states and the population,” he says.

Even so, they are not immune to societal ills either. In 2017, five people were killed at the popular BPM electronic festival in Playa del Carmen following a dispute widely believed to be related to event drug sales. Its latest edition was canceled in January. “We’re also victims of that – of drugs and violence, of threats, approaches from the illegal drug industry, and we also fight against that just like the rest of our country,” Romero said.

He and others also acknowledge a hard truth: Mexican festivals, which might be at the peak of their popularity, often showcase the parallel realities of a country where the class divide runs deep. At multi-day jams — like hip nightclubs, neighborhoods, restaurants and many other places — impunity, corruption and violence can feel light years away. The perimeters are well-guarded. Drugs are part of the “anything goes” vibe. And crowds largely hail from the middle and upper classes. 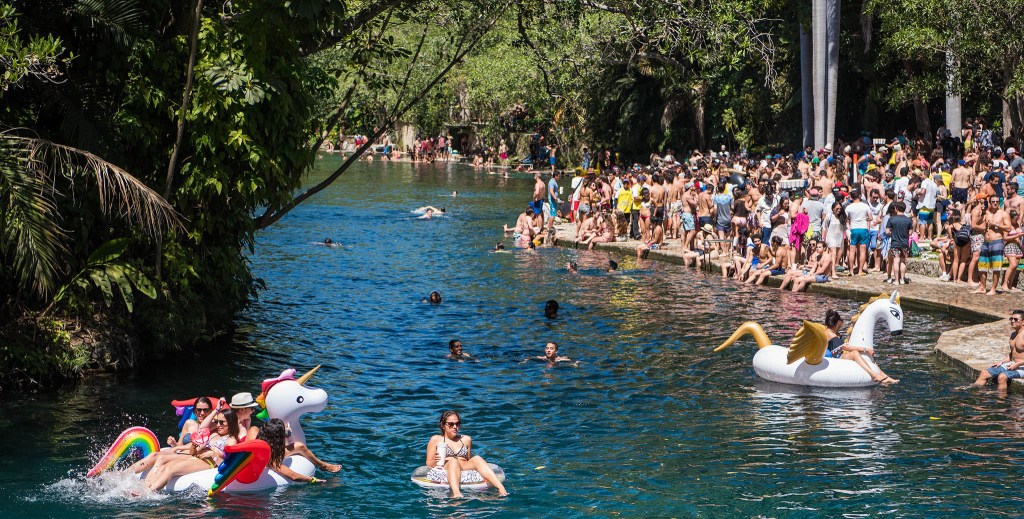 Bahidorá, which bills itself on Twitter as a “magical celebration, in an imaginary place,” aims to create a dreamlike ambience with a yoga healing camp, running and cycling activities, boutique camping and scuba diving. It’s also eco-friendly and has reduced its carbon emissions. The “imaginary place” is the state of Morelos, which often serves as a connection point for drugs moving between the country’s coast and Mexico City. “I think people choose, or their subconscious chooses, to put it in another drawer,” said Romero.

Andy Bennett, a professor at Griffith University in Australia who has studied festivals and popular culture, said the social split is partly the result of a heightened perception of risk. Whereas middle-class youth may have once wanted to protest against inequality at Mexican festivals like the famed 1971 rock event Avandaro, he said, moneyed classes from more secure neighborhoods now largely keep violence and poverty at an arm’s-length. “The festivals become extensions of that,” he says.

It’s not the only factor, though. “The stakes of being young and rebellious have always been higher in Latin America,” says Eric Zolov, a professor at Stony Brook University who has studied Mexican counterculture. He suggests that Mexico’s youth might encounter problems that those of the same age and class in the U.S. do not and points to those who were historically targets of military regimes as an example of the ways the region’s youth are sometimes closer to social woes.

More than anything else though, festivals are undeniably about the music, even if current events never fully fade from the fore. This year’s edition of Bahidorá included a lineup of nearly 50 acts, including English electronic duo Mount Kimbie and DJ-producer Robert Hood. “It’s an experience,” says Romero, noting Bahidorá generates over $1 million and brings nearly 1,000 jobs to local communities.

But he says he’s wondered how to encourage the festival’s tens of thousands of former attendees and millions of social media followers to not just attend upcoming editions, but do more for Mexico. “As an entertainer and promoter, how can we use these channels to create active political subjects?” Romero says. “My dream would be for this type of organization to have a political weight.

“We don’t have a direct responsibility,” he adds. “But we have an indirect involvement in solving this.”