When Michael Jackson released Bad in 1987, he accomplished something astonishing: One after another, the singles “I Can’t Stop Loving You,” “Bad,” “The Way You Make Me Feel,” “Man in the Mirror” and “Dirty Diana” shot to the top of the Hot 100.

Chris Anokute, then a kid in New Jersey, was wowed by the hit parade. “It was godlike to watch Michael Jackson’s videos and hear those songs,” he says. “I never imagined an artist could do that kind of magic.”

Only one other artist has ever matched Jackson’s feat: Katy Perry, who scored her fifth Number One from Teenage Dream when “Last Friday Night (T.G.I.F.)” topped the Hot 100 in 2011. Anokute – now Senior VP of A&R for Epic Records – helped sign Perry to Capitol a decade ago, and he served as an A&R on Teenage Dream. To achieve five Number Ones, he suggests an artist requires three key ingredients: “momentum, clarity of vision and chemistry with your collaborators.” With these elements in mind, we look back at Bad in honor of its 30th anniversary.

Quincy Jones Looks Back on the Making of Michael Jackson's 'Bad'

Jackson had a strong tailwind propelling him into Bad: Its predecessor Thriller featured seven Top 10 hits and went on to become the best-selling album of all time. But even during the era of super-sales, one LP flying off the shelves was not a guarantee of an equally explosive follow-up – take the example of Fleetwood Mac, who famously dominated with Rumours and then shipped several million fewer units of Tusk.

Jackson was keenly aware of the stakes. In Spike Lee’s 2012 Bad documentary, his collaborators remember him writing “100 million” on a mirror to keep his album-sales goal front and center. “There was a lot of pressure on Michael,” producer and songwriter Bill Bottrell tells Rolling Stone. Bottrell worked closely with keyboardist John Barnes and Jackson at his home studio creating demos for Bad. “He was a great motivator – he would motivate me, and part of that was this has to out-sell Thriller and things like that.”

Jackson had another force in his favor as he ramped up for Bad: Music technology was developing quickly during the mid-Eighties, and the Jackson braintrust rapidly incorporated the latest electronic wizardry into their compositions. “When you listen to that album, they just went insane for Yamaha DX7s and Roland D-550s,” says Stephen Bray, who worked as a producer and writer on Madonna’s Eighties juggernauts (Like a Virgin, True Blue and Like a Prayer). “It was, ‘Oh, my god, we can create sounds no one has ever heard before.’ I can emulate the sound of Bootsy Collins or Larry Graham plucking a bass and mix that into a huge, Moog-sounding, Stevie Wonder Music of My Mind thing now. I can have the sound of 500 people clapping. It was this convergence of the most advanced technology in the known universe at your disposal mixed with old-school musicality.”

This pushed Jackson to greater heights, as did the confluence of once-in-a-lifetime artists making music at the same time he was – Madonna, Whitney Houston, Prince, Michael’s sister Janet and George Michael. Over the course of the Eighties, more than 30 LPs yielded four or more Top Ten singles on the Hot 100; no other decade has produced half as many steamrolling pop records. Producer Narada Michael Walden, who teamed up with Whitney Houston on many of her Eighties Number Ones, describes the atmosphere during the decade as “a healthy rivalry” for chart dominance. Bray likens the sense of one-upmanship to “the way that the Beatles and the Beach Boys had this wonderful ‘whoa, did you hear Pet Sounds? Now what are we gonna do?'”

“You always wanted to bring in your A-game,” remembers Glen Ballard, who co-wrote Bad‘s “Man in the Mirror.” “Believe me.” 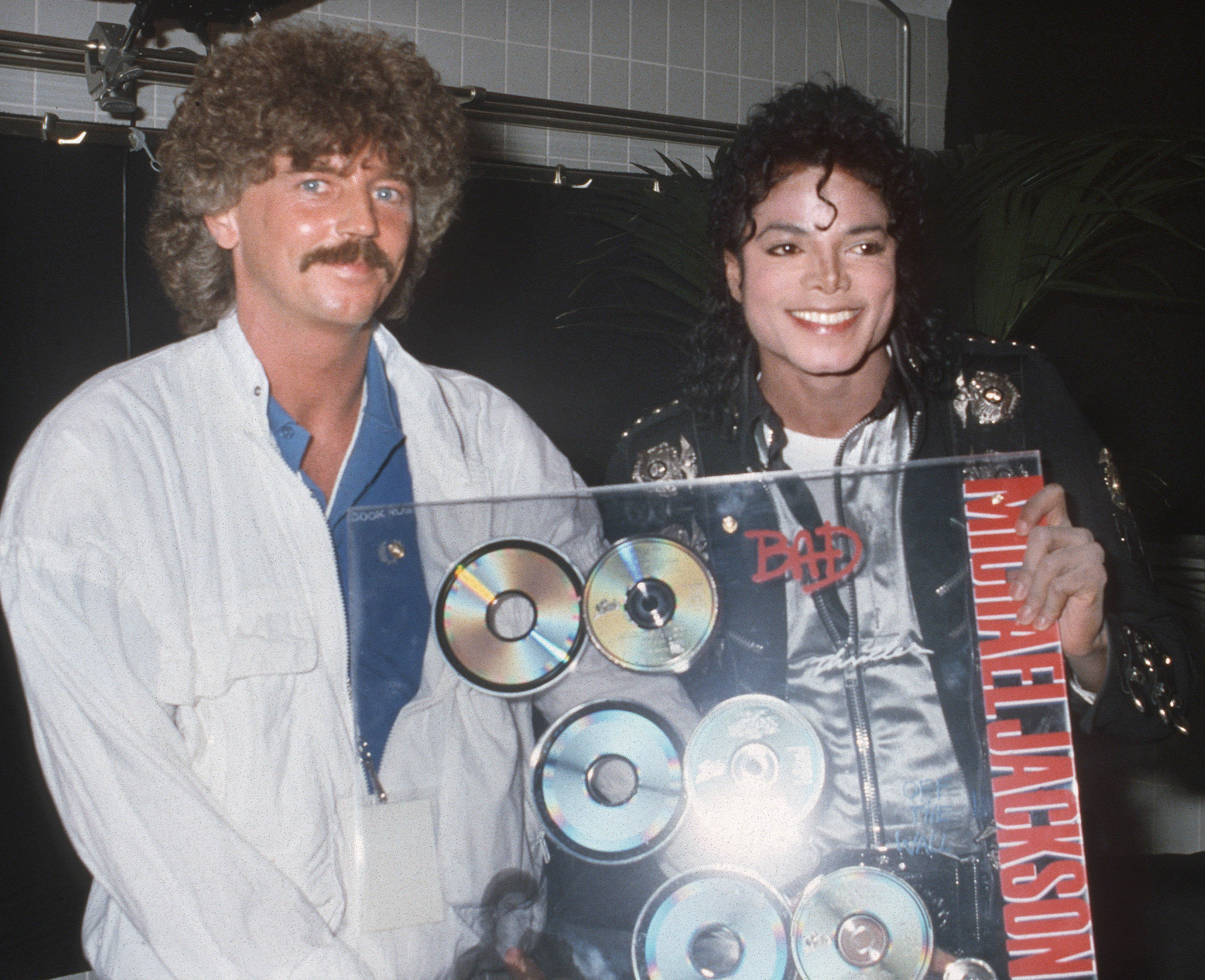 Jackson handled the majority of songwriting on Bad. He wrote or co-wrote three of the 10 tracks on Off the Wall and four of the nine on Thriller, but both LPs also featured multiple standout contributions from Rod Temperton (“Rock With You,” “The Lady in My Life”) and others. In contrast, Jackson penned eight of the 10 songs on the original version of Bad, including four of the five Number Ones.

His new position as writer-in-chief was immediately apparent during the demo sessions. “The vision came from Michael,” Bottrell says. “He beat-boxed the grooves and I would try to make it happen; same with John Barnes. Michael’s grooves came out of his mouth into my cassette recorder, and they were awesome from the beginning. It was brilliant to soak up his approach, which was one of extreme focus on the song and the outcome of the song.”

The notable exception to Jackson’s writing monopoly was “Man in the Mirror,” which Siedah Garrett penned with Ballard. It’s a testament to the power of their demo that it was able to stand out from the heap of other tracks that Jones was sifting through at the time. “Every songwriter in L.A. was sending Quincy songs for Patti [Austin] and Michael,” Garrett remembers. When she finished “Man in the Mirror,” she personally drove the demo to Jones’ house and pressed it into his hand. “He called me back a couple hours later like, ‘This is the best song I’ve heard in, like, 10 years,'” Garrett recalls. Not longer after, she ended up on the phone with Jackson himself. “The first thing he said to me was, ‘I love this song,'” she recounts. “The next thing he said to me was, ‘I love your voice.'” Then he asked her to add four more bars to the song’s hook.

Jackson and Jones had strong ideas about where they wanted to take the sound of Bad, too. There’s a notable absence of live bass on the album relative to Thriller; more than half the low-end was played on a synth. This helped turbocharge one of Quincy Jones’ production strategies. “Quincy’s philosophy was an outhouse bottom with a penthouse view,” says Walden, who credits Jones with encouraging him to move into production. “It’s gotta have a stank on the bottom, and then be pretty with a skyline view on top.

“Then you can play it in the bar, the club, the yacht,” he continues. “It works everywhere.”

Jackson developed many of the Bad songs in the comfort of his own home in an environment Bottrell describes as “a creative lab where Michael could work out what he wanted to do.” “There were not a lot of people; no egos to deal with; a lot of sidetracks down rabbit holes, but that was the point,” Bottrell continues. “I think Michael was quite relaxed the whole time. We had months and months of me sitting in the control room with him just having lunch, talking, watching movies on a rainy day when we didn’t feel like doing something. It was really magic.”

Ballard has similarly fond memories of the album’s creation. “Some people really want things to happen right away,” he explains. “The way we were making records was a slow process, but he was such a positive person and very patient with the process. It was pure fun; it was never work.”

Of course, no bond mattered as much as the one between Jackson and Jones, who had known each other for close to a decade at this point. “It’s like a great actor with a great director,” says Diane Warren, an ace songwriter who has written 32 Top 10 hits over the last three decades. “It’s hard to direct yourself. Put Robert DeNiro and Martin Scorsese together – it’s like that with Michael and Quincy. Any great artist needs someone to draw out their best, that can understand them and help take them to the next level.”

For Bray, the best demonstration of the Jackson/Jones mind-meld is the background vocals on Bad. “Normally you put three-part background vocals on the track, and it sounds good,” he explains. “You go with a more-or-less gospel approach: a fifth or a third of a chord singing behind the melody. If you listen to the backgrounds on Bad, not only are you getting those, you’re getting sevenths, you’re getting ninths and elevenths. In less experienced hands, it would sound like mud. But they managed to put in five-note chords. They got background vocals that sound like nothing we had ever heard before in that context.”

“The intention was always to make Bad great. Like, all time great.” –”Man in the Mirror” co-writer Glen Ballard

“Michael was at the peak of his power,” adds Ballard. “Quincy was at the peak. And we were all in sync to make this really, really special record. The intention was always to make it great. Really great. Like, all time great.”

The first single from Bad hit Number One on September 19th, 1987. To Garrett’s surprise, Jackson picked their duet, “I Can’t Stop Loving You,” as the record’s initial offering. “I didn’t think it was the strongest,” she says. But listeners didn’t seem to feel the same objections.

The turnover at the Hot 100 was much more rapid during the Eighties, which helped blockbuster albums land hit after hit. In 2017, Ed Sheeran’s “Shape of You” held the top spot for 12 weeks, and “Despacito” has held it for 16; in contrast, no song in 1987 or 1988 was Number One for more than four weeks.

Jackson struck again with “Bad,” which reigned for two weeks in October, and topped his own personal best for Number Ones from a single album (Off the Wall and Thriller both enjoyed a pair) when “The Way You Make Me Feel” reached the top spot in January of 1988. “Man in the Mirror” was the first Number One single of the spring in 1988 for two weeks, and “Dirty Diana” rose to make history as the fifth Number One from a single album in July.

“It’s not that hard to figure out,” Warren says of Jackson’s chart-topping barrage. “Come up with a bunch of great songs, produce them great, sing them great.”

Anokute is sure that no one else will be able to repeat the perfect storm of personnel and timing. “I can say this with confidence: it’ll never happen again,” the A&R vet declares. “There are going to be new highlights, new achievements for recording artists. But I can tell you with full certainty that no artist is going to have five Number Ones on an album again.”