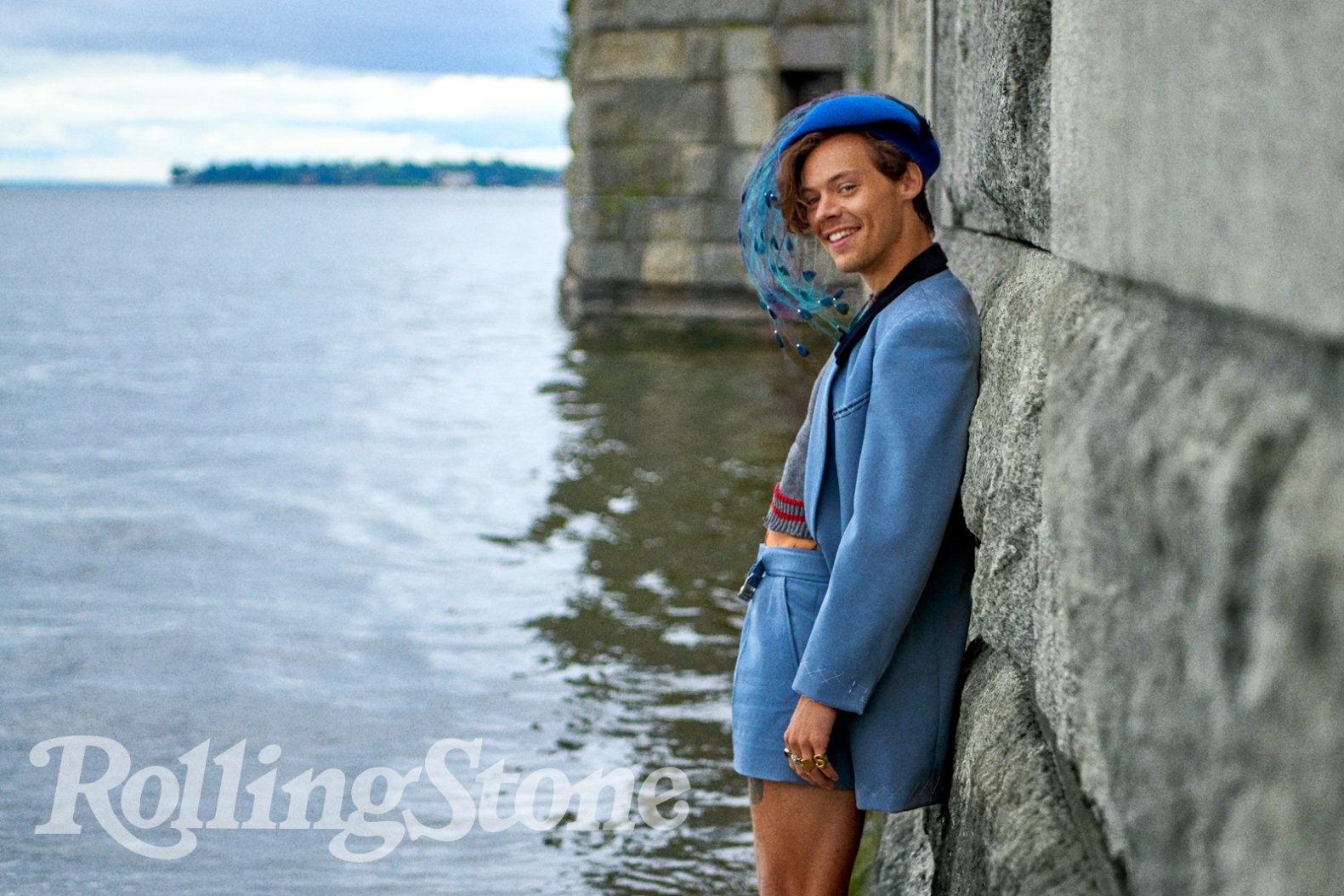 So what does a young superstar spend his time thinking about? Classic rock, mostly, along with the occasional movie or TV show. Harry Styles has always been a voracious scholar of pop history — the kind of guy who obsesses over John and Yoko album covers and Fleetwood Mac deep cuts. “We’re all just fans,” he says. “I’m just a music fan who happens to make some.” These are just a few of Harry’s favorite things — some influences, some inspirations, some heroes.

Listen along to our Harry Styles playlist here.

Van Morrison
The Irish blues bard was down and out in Boston when he wrote his brooding 1968 song cycle Astral Weeks. “It’s my favorite album ever,” Harry says. “Completely perfect.” Harry recently posed with his idol for a backstage photo — inspiring Van to smile, which doesn’t happen too often. The grin is so out of character for Van, Harry jokes, “I was tickling him behind his back.” (He’s kidding, obviously.) On his first tour, before going onstage, he played “Madame George” over the speakers — the epic ballad of a Belfast drag queen. “‘Madame George’ is one of my favorites — nine minutes. I’ve got some long songs but not my nine-minute one — it hasn’t quite come through yet.”

Joni Mitchell
Harry got so obsessed with her 1971 classic Blue, he went on a quest. “I was in a big Joni hole,” he says. “I kept hearing the dulcimer all over Blue. So I tracked down the lady who built Joni’s dulcimers in the Sixties. She still lives around here.” He not only found her, she invited him over. “I went to her house and she gave me a little lesson — we sat around and played dulcimers.” She built the dulcimer Harry plays on his new album. “Blue and Astral Weeks, that’s just the ultimate in terms of songwriting. Melody-wise, they’re in their own lane. Joni and Van, their freedom with melodies — it’s never quite what you thought was coming, yet it’s always so great.”

Etta James
The hard-living R&B legend could do it all, from raw Chess blues to pop-soul torch ballads. Harry is a devotee of her 1960 debut album At Last! “This whole album is perfect. On that record you have ‘I Just Want to Make Love to You’ going right into ‘At Last,’ which has to be one of the greatest one-twos ever. Her ad libs are so intense. It’s like, ‘Come on, Etta — tell us how you really feel.’”

Wings
Paul McCartney’s 1970s band left behind a slew of shaggy art-pop oddities. Harry swears by London Town and Back to the Egg. “While I was in Tokyo I used to go to a vinyl bar, but the bartender didn’t have Wings records. So I brought him Back to the Egg. ‘Arrow Through Me,’ that was the song I had to hear every day when I was in Japan.” The 1971 suite Ram was divisive for Beatles fans at the time, but for Harry it was a psychedelic experience: while making the album, he and his band enjoyed it while lying out in the sunshine on mushrooms. “I love Ram so much — I used to think it was a mixed bag, but that’s part of its beauty. And the one that’s just called McCartney, with the cherries on the cover and ‘The Lovely Linda’ on it.”

John & Yoko: Above Us Only Sky Documentary
A deep dive into the world of John Lennon and Yoko Ono, during the making of Imagine. “I watched Above Us Only Sky on Netflix,” Harry says. “Seeing him play ‘Imagine’ on piano made me want to take piano lessons.” One of his favorite Lennon songs: “Jealous Guy,” especially the Donnie Hathaway cover. “Have you ever heard the original version of ‘Jealous Guy’? It was called ‘Child of Nature.’ Every time I play ‘Jealous Guy,’ I can’t help singing ‘Child of Nature.’ I really like Mind Games too. My favorite-ever album cover is the John and Yoko Live Peace in Toronto. So beautiful: it’s blue sky with one cloud, and that’s it.”

Carole King
For a playback of his new music, Harry arranges to listen at Henson Studios in Hollywood, which used to be the old A&M Studios, in Studio B. Why? “It’s the room where Carole King recorded Tapestry.” Obsessive pop scholar that he is, Harry reveres King as both a singer and songwriter. His favorite: “So Far Away.” “How do people make shit like this?”

Crosby, Stills and Nash
These three hippie balladeers summed up the mellow West Coast soft-rock vibe, despite their chemical wreckage. (For the full story, see the great new band bio by Rolling Stone’s David Browne.) “Those harmonies, man,” Harry says. “‘Helplessly Hoping’ is the song I would play if I had three minutes to live. It’s one of my ‘one more time before I go’–type songs.”

The Other Two TV Series
He’s a big fan of the Comedy Central series. “It’s a brother and a sister — they’re the Two — and their younger brother becomes a viral YouTube sensation. He’s a Justin Bieber–type thing. He’s 13, and it’s basically those two dealing with that. It’s really funny.” (He’s got a thing for absurdist pop scenes like this — he also recommends the documentary When the Screaming Stops, about a bizarre reunion gig from the Eighties twin-brother duo Bros.)

Paul Simon
“50 Ways to Leave Your Lover,’ that’s the greatest verse melody ever written, in my opinion,” Harry says. “So minimal, but so good — that drum roll. ‘The Boxer’ is a perfect lyric, especially that first verse.” Paul Simon was one of his childhood soundtracks, with or without Art Garfunkel. “I grew up in a pub for a few years when I was a kid and Simon and Garfunkel were just constantly playing, always. Every time ‘Cecilia’ started, I’d be like, ‘I think I’ve heard this a hundred times today.’”

Last Night, the Grammys Turned Back Into an Awards Show

Hall and Oates
“For my 21st birthday, I had a big party, and I convinced myself I really wanted Hall and Oates to play. I knew it wasn’t going to happen — I just had to ask. But just a few months before, they went into the Rock and Roll Hall of Fame, so whatever it was, it was now three times as much as it used to be. Their rate just tripled — ah, fuck.”

Peter Gabriel, “Sledgehammer” Video
“The greatest music video ever. I also love that Eighties synth pan-whistle sound — it basically just exists in this song and ‘My Heart Will Go On.’”

Elvis Presley
“The first music I ever heard was Elvis Presley. When I was little, we got a karaoke machine and I sang Elvis, because that’s what my grandparents listened to. I made my grandfather a tape of me doing Elvis songs on one side and all Eminem on the other side. Unfortunately, I accidentally played him the wrong side.”

Harry Nilsson
The legendary L.A. eccentric could croon middle-of-the-road hit ballads like “Without You,” but also a crazed weirdo who caroused with John Lennon and pursued his own lunatic pop fantasies. In other words, Harry Styles’ type of guy. “I think of all the great songwriters I love — but they all had their pop songs. Joni Mitchell with ‘Help Me,’ Paul Simon with ‘You Can Call Me Al,’ Harry Nilsson with ‘Coconut.’ You have to conquer the fear of pop.”

Stevie Nicks
The Gold Dust Woman and her “little muse” are everybody’s favorite rock friendship. At the Hall of Fame ceremony in March, the sight of Harry dropping to one knee as he hands the award to a radiant Stevie — one of the iconic cross-generational images of our time. They first sang together in L.A. two years ago, when she made a surprise guest appearance at one of his first solo shows. “One of my favorite-ever musical memories. We sang ‘Landslide’ as a soundcheck, and that was even cooler for me than the show — just me and her, in an empty Troubadour.”

They just sang “Landslide” at a Gucci event in Rome, with Harry hitting impossible high notes on the final “snooooow-covered hills.” “We practiced in the dressing room,” he says. He’s got the rehearsal footage on his phone — when he hits that note, guitarist Waddy Wachtel is too stunned to keep playing. “That’s my favorite bit,” Harry says. “Practicing the song together. Just the two of us.”

Melinda Dillon, Actress in ‘Close Encounters of the Third Kind’ and ‘A Christmas Story,’ Dies at 83