The first bad sign came even before AC/DC started recording their new album, Rock or Bust, in Vancouver last May: The group’s longtime drummer, Phil Rudd, was 10 days late for the sessions. “One minute he was coming, then he wasn’t, then he was,” lead guitarist Angus Young recalls. “We’re not a band that likes to wait around.” At one point, Young says, producer Brendan O’Brien decided Rudd had one last chance to show up.” Brendan said, ‘If he’s not here by Friday, there will be another drummer there.'”

Rudd arrived and, Young says, “did his job.” But, the guitarist notes, “I’ve seen him in better shape. It was not the Phil we had known, after we had finished the last tour. He’d let himself go.” In October, Rudd missed an AC/DC photo and video shoot in London. Then, on November 6th, he was arrested at his home in New Zealand, accused of murder-for-hire. The charge was dropped for lack of evidence. But Rudd is still accused of threatening to kill, and of possession of methamphetamine and cannabis.

In a press statement, AC/DC strongly implied they were ready to go on the road without him: “Phil’s absence will not affect the release of our new album, Rock or Bust, and upcoming tour next year.” Young confirms this in an interview a week after Rudd’s arrest: “The drum situation is a question mark. But we will definitely be out there.” The guitarist confesses he was caught off-guard by the extent of Rudd’s troubles. “But our problems had begun even before the situation he’s in now. And our thing was we were going forward.” 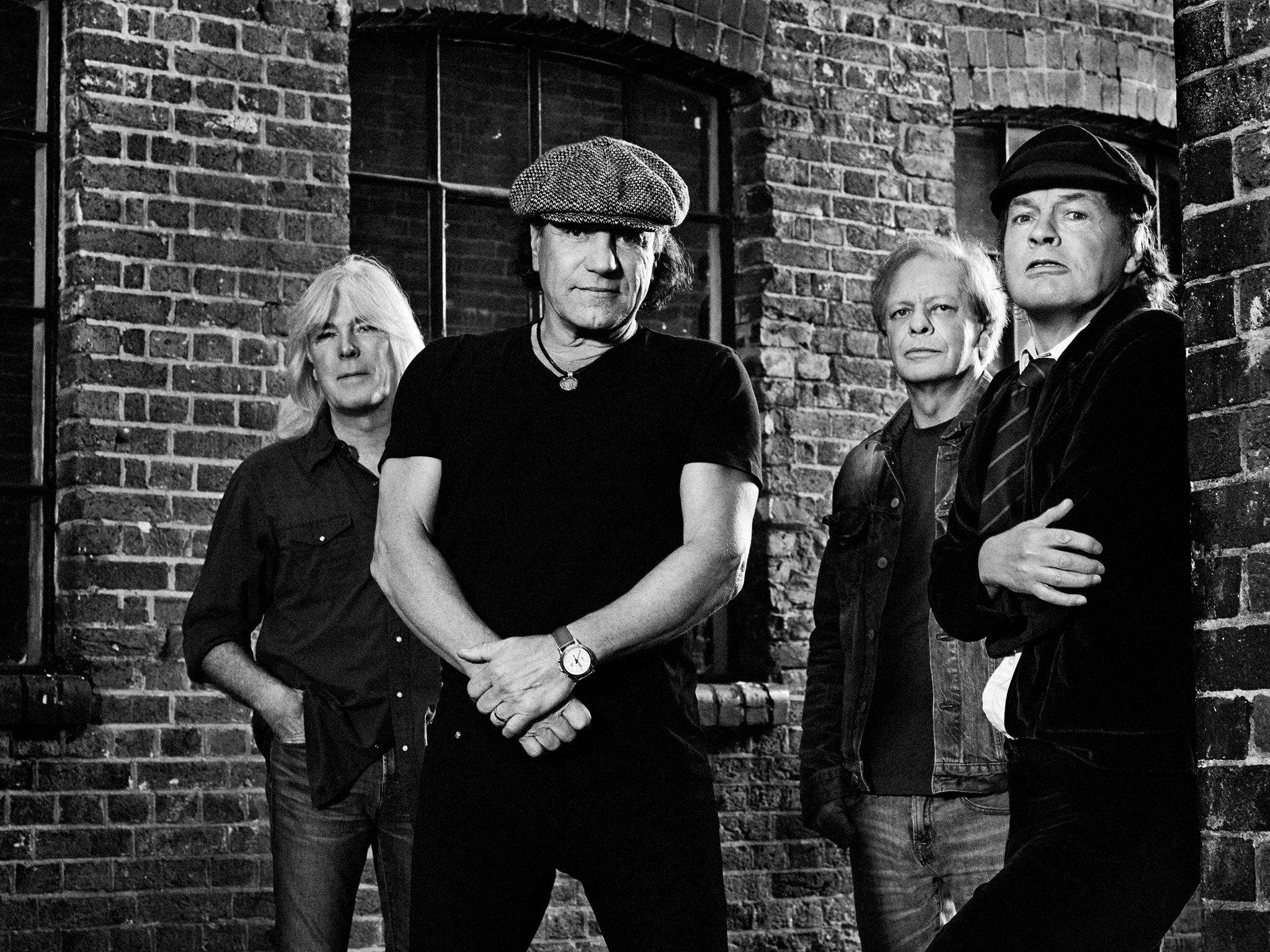 Young is referring to a bigger critical hole in AC/DC’s boogie power: the loss of Malcolm Young, Angus’ older brother and the group’s iron-willed rhythm guitarist, who is suffering from dementia and is in full-time care at an undisclosed facility in Australia. Malcolm, 61, does not play on Rock or Bust and is permanently retired from the multi-platinum blues-rock band he founded, with Angus, in Sydney in 1973. That leaves Angus – 59 and still tearing across stages in his trademark schoolboy shorts – to guide singer Brian Johnson, bassist Cliff Williams and new guitarist Stevie Young, Malcolm and Angus’ 58-year-old nephew, into an uncertain future. But “Mal always wanted the music to go on,” Johnson says. “And I’m not going to say no.”

“It’s something that had actually been happening for a long time,” Angus says, speaking publicly for the first time about Malcolm’s condition during an earlier conversation in October. The symptoms – lapses in memory and concentration – “had surfaced even before the last project,” AC/DC’s 2008 album, Black Ice. But Angus says Malcolm was “still capable of knowing what he wanted to do. I had said to him, ‘Do you want to go through with what we’re doing?’ And he said, ‘Shit, yeah.’ ” Malcolm, Angus points out, “liked to finish what he started.”

Hunched over a cup of tea in a London hotel, speaking in a soft, resigned growl, Angus reveals that Malcolm was already in treatment during his last tour with AC/ DC, from 2008 to 2010. “He got good help, good medical care,” Angus says. Malcolm had to “relearn a lot of things,” including riffs he had created for AC/DC’s biggest songs, “which was very strange for him. But he was always a confident guy, and we made it work.”

Malcolm is eerily present on Rock or Bust. The 11 songs are credited to Young-Young, largely built by Angus from guitar hooks he and Malcolm accumulated while writing previous AC/DC records. Angus did not play any of the new material, as he worked on it, for Malcolm. “With the condition he got in, that kind of faded,” Angus concedes. He sought guidance from another older brother, George, a member of Sixties Australian rockers the Easybeats who co-produced AC/DC’s early albums. But ultimately, Angus says, “You’ve got to make the decision yourself: ‘What am I doing?’ ” He and Malcolm, both born in Glasgow and raised in Sydney, answered that question together in 1980 after the death of then-AC/DC singer Bon Scott; they hired Johnson, an ebullient Englishman with a sandpaper howl, and made their biggest-selling album, Back in Black. This time, in late 2013, Angus turned to Stevie, the son of his and Malcolm’s oldest brother (also called Stevie). Stevie had filled in for Malcolm on a 1988 tour, when the latter took a sabbatical to beat his alcoholism.

Angus, Malcolm and Stevie were close as boys, attending school together in Australia; later, Malcolm produced demos for some of Stevie’s bands. “Angus filled me in on what was going on with Mal,” Stevie says. “It wasn’t going to be the band the way it was – that was impossible.” Stevie, who lives in Birmingham, England, flew to Australia to visit Malcolm, “to see the situation for myself. Mal was physically fine,” he contends. “But I don’t think he could have done the tour.” 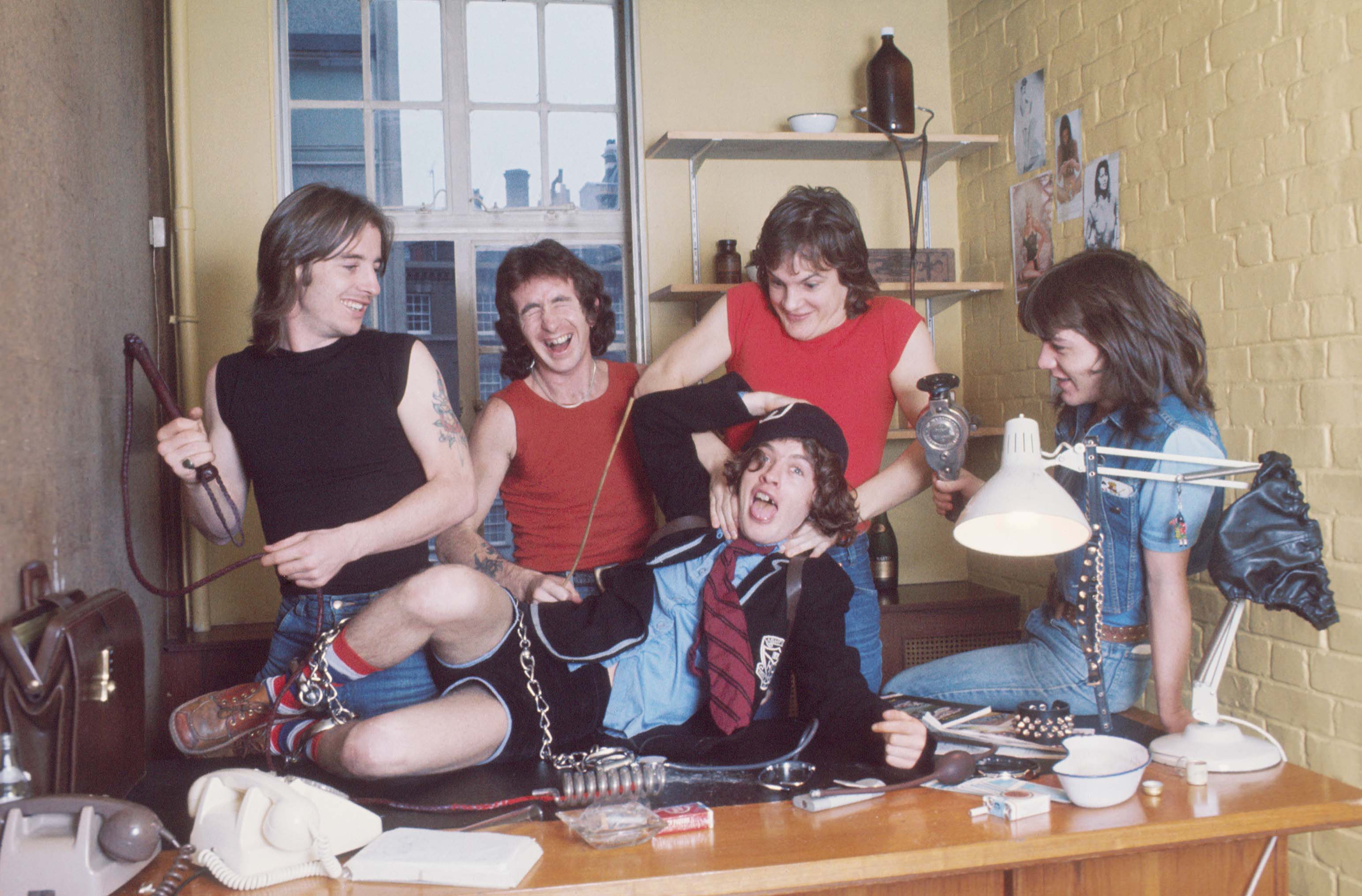 “It was awful and great at the same time,” Johnson, 67, says of making Rock or Bust. “Angus must have felt strange playing these tunes without Malcolm.” But Johnson recalls passing Stevie’s hotel room at night “to see how he was doing, and he’d have his things out, doing the songs, learning his riffs. He worked his socks off to make sure he was on the money.”

“The super-important thing about AC/DC is the left-right thing in the guitars,” O’Brien says. “Stevie understood that. He put on the same guitars, through the same rig, and got the same sound.” Williams believes that was inevitable. Stevie is, after all, a Young. “It’s in his blood,” the bassist, 64, says. “And it shows.”

Everything else about AC/DC, including any life they may have after Rock or Bust and the 2015 tour, is up to Angus – alone. “This is Angus’ passion, but he doesn’t have Malcolm to lean on,” O’Brien observes. “At some point, he has to decide, ‘Is this something I want to keep doing, or have I said my piece?’ “

Malcolm has not heard Rock or Bust. “He still likes his music,” Angus says. “We make sure he has his Chuck Berry, a little Buddy Holly.” But Angus believes he is pressing ahead on the record and the road – without Rudd if necessary – according to his brother’s wishes and standards. “Look, even with his health, Malcolm was touring until he couldn’t do it anymore.”

Rudd’s arrest “is a big blow to us,” Angus admits. But, he repeats, “we will definitely be out there. We are committed to this.”