1. Dirty Denim, “Meant to Be,” from Dirty Denim Demo Tape (7″ EP). This is the most arresting thing I’ve heard come out of the radio — in this case, KALX, the University of California station in Berkeley — since Lady Gaga’s “Bad Romance” and Train’s “Hey Soul Sister.” A four-woman band from San Francisco starts up, as if Sleater-Kinney, or more accurately the Corin Tucker-Sarah Dougher-sts spin-off Cadallaca, had fallen head first into the Shangri-Las. Punk wham in place, one person starts up with screechy eeeees, another with high oooooos, a third with dop-wop-wahs, all running around an I-saw-him-on-the-street-and-I-had-to-have-him plot. The lead storyteller, in a tiny, troll-like voice, makes him a promise he can’t refuse: “Gimme a ride on that motorcycle/If you treat me right, I will not go psycho.” These people are having so much fun, turning all of rock & roll into one little tin-foil wrapped joke and meaning every sound that isn’t a word with all their hearts.

2. Sharon Van Etten, Remind Me Tomorrow (Jagjaguwar). Going back to at least the 1890s, there has always been a claque of New York writers to insist that the last flowers of bohemia are still pushing up through the concrete.

3. Cat Power, Wanderer (Domino). Chan Marshall has been making records for more than 20 years, but there’s still something tentative and unsure in her tone, in the way she feels her way into a song, in their fraying endings. At her best — and along with her worst title, this might be her best album — those qualities can seem mystical, as if she’s receiving a song, accepting it, not making it, not even finding it. That’s most distinctive on the first and last numbers here. With “Wanderer” you can feel Blind Willie Johnson hovering in its clouds, whispering “Dark was the night, cold was the ground” into the singer’s ear. With “Wanderer/Exit,” Lead Belly’s “Black Girl,” or anyone else’s “In the Pines,” seems to drift in between the trees. You can sense it, but you can’t catch it, can’t fix it, can’t say, there.

“Horizon” creates the illusion that you’re waking up to hear it; it makes a shift in dimensions. When the voice is doubled, a kind of unreality sets in. It’s as if two sides of the same person, each with a different set of memories, is questioning the other about the same events, the same family. The chiming piano that carries the music is distracting in its precision, but nothing like that happens with “Robbin Hood,” where a plain strummed guitar and a nearly invisible bass creates the ambiance of an empty room. You can’t tell if the singer is afraid to leave, or — the song is only two minutes long, it doesn’t tell you enough, it seems to have been cut off by someone who doesn’t want you to hear it.

This is music that creeps around baseboards, feeling for tiny holes in the wood, because they make great echo.

4. Jeff Jackson, Destroy All Monsters—The Last Rock Novel (FSG Originals). I’m suspicious of anyone who claims to have done the last anything. It’s like they’re telling everyone else to shut up. Jackson does have an end-of-story premise: People are loose in the land, seemingly independent of each other but following the same script, massacring bands onstage. The book is two novels back-to-back, with different dead heroes but the same story. “My Dark Ages” is direct, “Kill City” metaphorical.

Apparently, with everybody in a band, almost every band is terrible. “The killers wanted music to matter again, she says. They wanted to purify it.” This is not convincing; it’s not even interesting. But the scenes of carnage, every one presented plainly, without pumped-up adjectives and gory effects, are absolutely devastating.

5-6-7. Van Morrison, Live in Boston 1968 (vanmorrison.com); Alan Torney and Tim Desmond, producers, “The Summer of Astral Weeks” (RTE 1); Van Morrison, The Prophet Speaks (Caroline/Exile). Researching the book that appeared last year as Astral Weeks: A Secret History of 1968, Ryan Walsh spent months looking for a rumored tape of Van Morrison, playing a Boston Club called the Catacombs that summer, trying out some songs that later that year would make up the core of his album Astral Weeks — a record that, as the critic Lester Bangs once put it, would over time take on the quality of a beacon for people who needed that and nothing less. Walsh found the tape; while he wouldn’t copy it, he would play it for friends. It was a revelation. Here was Morrison on acoustic guitar, Tom Kielbania on bass, Joe Bebo on drums, and John Payne on flute, in the dankest obscurity. Morrison was in Boston hiding out from mobsters who had their hands on rights held by Morrison’s late producer, Bert Berns. And here was “Cyprus Avenue” whole, complete, those first notes raising a curtain that, in Morrison’s music, has never come down, a single performance affirming the authority of someone who ruled the world. “Beside You” was almost as strong, but the music wasn’t exactly about the songs. There was a new aesthetic of suspension, between experience and dream, love and death, whispering and miming, that in Boston made Morrison’s 1967 hit “Brown-Eyed Girl,” which could have been Tommy James and the Shondells, or “He Ain’t Give You None,” from Morrison’s grunge album Blowin’ Your Mind from the same year, sound — now, 50 years later — as if they were written for the next album, not the last. 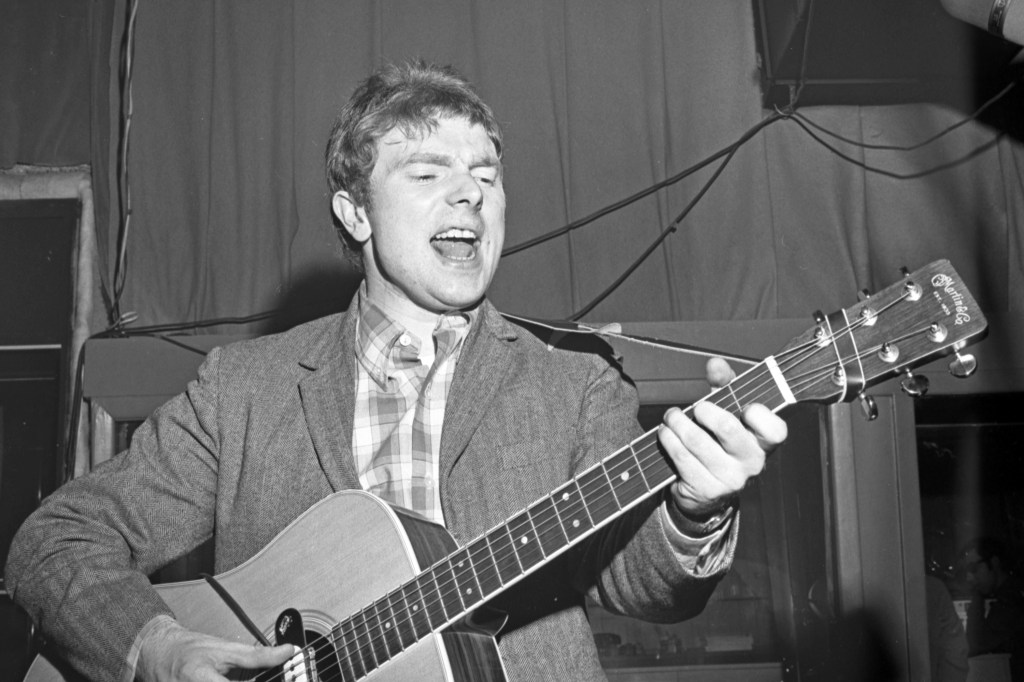 Last fall, the tape appeared on Morrison’s website, likely as a copyright protection. It was taken down almost before anyone could notice. This was fitting: What began as a rumor went right back there. You can find it if you look; it’s a signal document, but also a kind of suspense story. What if this music happened once, this night, and then, for whatever reasons, good, bad, unspeakable, was never heard again?

As enthralling is Torney and Desmond’s radio documentary on both Morrison’s Boston combo and the team of first-rank New York jazz musicians, assembled by the producer Lewis Merenstein, who with Morrison and Payne would make Astral Weeks. Whether listening to Joe Smith of Warner Bros., who signed Morrison and released the album, the New York engineer Brooks Arthur, or the Boston and New York musicians, what comes through is professional detail, a devotion to craft, and, overwhelmingly, a sense of having received, and still possessing, a kind of gift: We were in the right place at the right time. If anything had been different, none of it would have happened. It was the kind of chance that comes to no one more than once. They’re as joyously mystified by their own actions as anyone coming across their music hundreds of years from now might be.

Most striking of the witnesses to right place, right time, is Janet Morrison Minto, Morrison’s then-wife, at the time traveling as Janet Planet. She is precise, clear, thoughtful, emotional. She sounds simultaneously and consistently as she would have been in 1968, young and girlish, frightened and thrilled by her own memories, and like a old woman for whom there are no borders between past and future: “I still love him to death.”

Lately, Morrison has been collaborating with the jazz organist Joey DeFranceso on remakes of jazz and R&B standards and productions of his own new songs. For me, jazz organ is a crime against nature, and nothing on The Prophet Speaks (not as pretentious as it sounds: the sleeve shows Morrison shushing the ventriloquist’s dummy on his lap) makes an argument to the contrary. Morrison has been down this road before, a road where everyone you meet offers a dead fish for a handshake. It turns, sooner or later.

8. Andrew Shafer, Hope Never Dies: An Obama Biden Mystery (Quirk). With details that lead you right into the story (Jill Biden upstairs watching Law & Order reruns — what else), the tale of the ex-vice and the ex-president, both bored out of their minds, teaming up to solve a Delaware crime, falls into place quickly. What emerges more slowly is a novel about friendship, told in Biden’s voice and spinning on his resentment and near-worship for Obama, which hits its peak when Biden is facing down a clubhouse full of bikers with guns drawn. He tells them he was vice-president. They’re blank. “I was your state’s senator for 36 years,” he says. They have no idea who he is. Then Obama strolls in through the back door with a sawed-off shotgun over his shoulder. The bikers lower their guns. “‘Looks like you all know who my pal is,’ I said with authority. ‘He’s the guy who killed Bin Laden,’ one of the bikers blurted. They all nodded in agreement. The awe in their eyes was, frankly, embarrassing. ‘Actually, SEAL Team Six—’ I started to say, but Barack cut me off with a stiff pat on the back. ‘—is waiting outside, in case there’s any trouble,’ he finished.” You can bet that if Biden runs, Shafer will have the second installment out by May. If Biden doesn’t, he ought to anyway.

9. Alexandria Ocasio-Cortez, “War” (Twitter). “I hear the GOP thinks women dancing are scandalous,” she wrote. “Wait till they find out Congresswomen dance too!” To the old Edwin Starr hit, which sounds as fresh today as it did in 1970, 19 years before she was born, she pranced up to her office door, pointed her finger, did a pirouette, backstepped in front of her plaque and the flag, and went in. It felt like an oath of office: as if she were breathing in the Constitution and whistling it out.

10. Bumper sticker, Berkeley (December 22).   “EVERY TIME I CHANGE LANES,” read the top of a two-line message, the two levels separated by a thick black rectangle, which kept your eye from going down so quickly that you can’t think up the tag line before you do. I expected something like “IT REMINDS ME OF MY PLACE IN THE GREAT CHAIN OF BEING.” “I THINK OF SANDRA BLAND,” it ended.