1 Amy Rigby, “The President Can’t Read” (amyrigby.com/bandcamp). With a jangly sound that places it right where all the half-Beatles/half-Byrds LA bands were in 1966—the Leaves, say, or Jackie DeShannon with the Byrds—the same year he managed his way out of Fordham and into the Ivy League.

2. Chelsey Minnis, Baby, I Don’t Care (Wave Books). 240 pages of one-page poems, mostly double quintets, of film noir dialogue, fractured—fractured as if the actress is stepping in front of the cameras so drunk she can only say what she wants her lines to say, or what they really say: “I’m a pair of diamond earrings away from sleeping with you.” “The word for what I want is money.” The book is deliriously entertaining, and the screws get tighter. “You had me on a merry-go-round for a while,” Minnis begins on page 193.

That was terribly decent of you.

I have to run along now.

I’m beginning to catch on.

You’re a very good person but you can’t get away with it forever.

3 Mick LaSalle, review of Mapplethorpe, San Francisco Chronicle (March 8). In one of several Friday reviews, an essay on reductionism in culture in 53 words: “How does a movie depict what can’t ever be identified to anyone’s satisfaction, that might be a mystery to the artist himself? This is just the limits of the biopic form. Did Ray Charles and Johnny Cash really become great musicians because their brothers died? Maybe. Sure. But then again, of course not.”

4 Streets of Fire: 35th Anniversary Edition, directed by Walter Hill, written by Larry Gross (Shout Factory DVD). “A rock ’n’ roll fable where the Leader of the Pack” –Willem Dafoe, with Lee Ving as his as his so-evil –you-can-barely-look-at-him enforcer—“steals the Queen of the Hop”—Diane Lane—“and Soldier Boy”—Michael Paré—“ comes home to do something about it,” Hill described the movie when it was released in 1984. It was met with critical derision and public indifference. 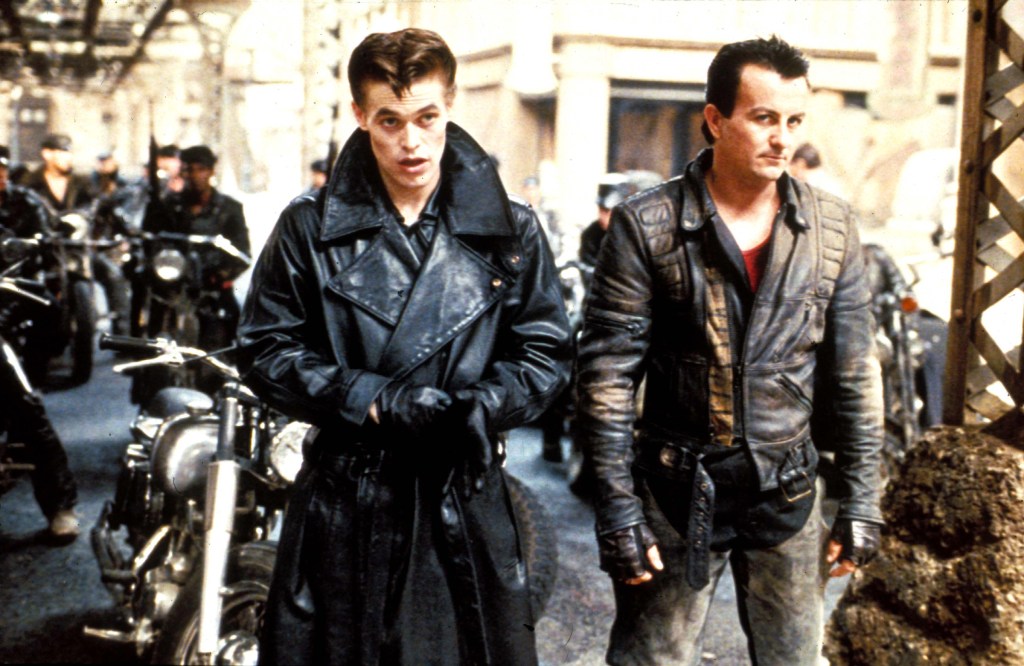 It ends with Lane’s character and her band performing “Tonight Is What It Means to Be Young” at a triumphant final concert—the music, produced by Jim Steinman and actually sung and played by a huge, faceless assemblage credited as Fire, Inc., is dead coming out of a speaker but so big on screen it’s convincing that the single song is the concert: nothing could set it up, nothing could follow it. It’s the most emotionally complete rock ‘’n’ roll performance footage, real or fictional, I’ve ever seen.

“When he was writing Hamlet,” Bob Dylan wrote in 2016 in an acceptance speech for the Nobel Prize read by the American ambassador to Sweden, “I’m sure he was thinking about a lot of different things: ‘Who’re the right actors for these roles?’ ‘How should this be staged?’ ‘Do I really want to set this in Denmark?’ His creative vision and ambitions were no doubt at the forefront of his mind, but there were also more mundane matters to consider and deal with. ‘Is the financing in place?’ ‘Are there enough good seats for my patrons?’ ‘Where am I going to get a human skull?’ I would bet that the farthest thing from Shakespeare’s mind was the question ‘Is this literature?’” “Tonight Is What It Means to Be Young” is of a piece. It was, as so much of movies are, about money and rights and time and improvisation: how do we solve this problem? “We were looking for a title” for the movie, Hill said when I asked him about how the song happened. “I was blissfully ignorant of the Springsteen song”—a small, powerful ballad from the second side of Springsteen’s 1978 Darkness on the Edge of Town. “Maybe it was in the back of my mind. I was looking in the Book of Leviticus—you can always find imagery in the Old Testament. There was ‘Seven Days of Fire’—I had figured out over how many days the story took place. ‘Seven Days of Fire’? ‘No,’ people said, ‘“Streets of Fire”!’” Hill and his team were negotiating with Universal; the film producer Joel Silver brought in the music producer Jimmy Iovine to do the soundtrack: “He was close to Springsteen, he can get the song. It was a matter of getting the movie made—this wasn’t going to be a movie-star movie. The title: the commercial power of Springsteen put us over the top.”

“He had already seen the finished film. We shot ‘Tonight Is What It Means to Be Young’ four or five months later. We had to bring Diane back from Cotton Club and work around her. Jim came in with ‘Tonight.’ I thought it was a terrific recapitulation of the idea of the movie—it had an intensity and a melancholy, graceful and hopeful: youth isn’t going to last. I told the studio—I did some of my best acting—I was the wounded artist forced to do something he didn’t want to do, which was not at all true—because this was not going to be a one-day shoot. We took four days for it. With Diane on loan, we didn’t have much time for rehearsals. (“I had great respect for people like Minnelli,” Hill had said in an earlier interview. “MGM in the old days, everybody was on contract and they would rehearse for weeks. We don’t get that. We would stage it and shoot it.”) Everything evolved out of the music. It came from repeated listening to the song. My statement came out of that—the deep melancholy as opposed to surface ideas about youth. I was going to shoot the shit out of it. Lots of angles. As much prelighting as we could. Three cameras—shooting the whole song three times.”

As you watch, now, you can find your way into the song. You’re the drummer, shot from below. You’re in the doo-wop group high-stepping into the show from the wings and taking it away. You’re the guitarist in a zoot-suit, whirling to meet Lane back to back as if she’s the picture and he’s the frame. You’re in the audience, trying to make the song last forever. You’re singing the song as it comes out of Lane’s mouth, wondering who the six or seven people who seem to be actually singing really are, and then not caring. 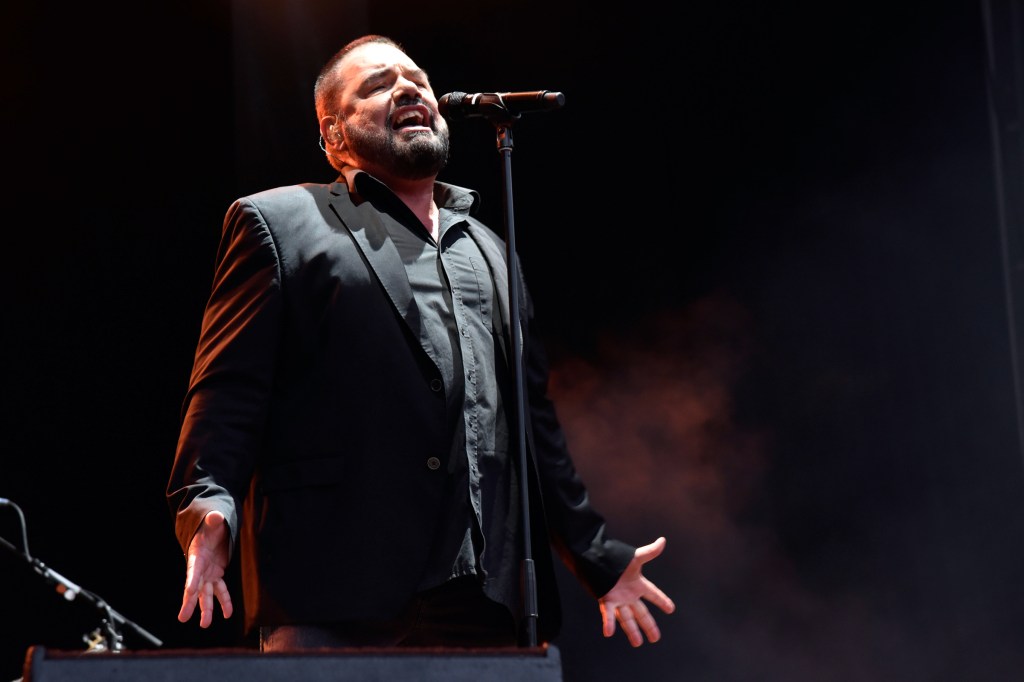 5 Alphaville, Strange Attractor (Polydor). Anyone who attended grade school or high school graduations in the Nineties had to sit through the processional of the slow version of Alphaville’s “Forever Young,” a pumped-up but self-doubting anthem that quickly became unbearable. The band was always sharp—“Big in Japan,” from their first album, is as sardonically defeatist as anything from Steely Dan—and even if only singer Marian Gold remains from the original group, and this came out in 2017, it took Gold and four new members five years to make, and in the middle of the album—“Enigma,” “Mafia Island,” and “Handful of Darkness”—the sound is as twisty and shrouded as it always was. “Heartbreak City” is more—a riff, somehow hidden in a swirl, that seems to run from day to night.

6 Russian Dada 1914-1924, edited by Margarita Tupitsyn (MIT). As the 20th century began, the order that had held Europe together since the 1870s and 1880s was beginning to come apart, but the first manifestations came not in politics, but in art: art that said that life as everybody understood it, as everybody expected to go on just as it had, no longer made sense. It didn’t make dada sense, didn’t reflect the truths artists were fooling with that said that ordinary language was insufficient to say what had to be said, that a view of the world could only be depicted in fragments, that chance had to replace intent—and while the word dada wasn’t discovered until the spring of 1916 in Zurich, as part of the experiments going on nightly at the Cabaret Voltaire, other artistic effusions took the name after the fact. One, as detailed in Tupitsyn’s “Putting Russia on the Dada Map,” a hurricane of a long first essay in this catalogue of an exhibition at the Reina Sofia in Madrid in 2018, was Ilia Zdanevich’s Shoeism—launched in 1912 when he announced that the Mona Lisa, at the time missing from the Louvre, was, as Tupitsyn writes, “not worth finding and claimed that a cheap ready-made such as a shoe should supersede it.” Zdanevich doubled down in 1914 with a lecture titled “Adoration of a Shoe,” attacking “Italian futurism’s fascination with progress and technology” with the prediction, in his own words, that “in thousands of years, to those who think of the twentieth century there will appear a specter not of an airplane . . . not of futurism . . . not of wireless telegraph . . . not of Marinetti or of Tolstoy, but of a shoe.” The book is illustrated as thrillingly as Tupitsyn writes—an opening two pages of the actress Lev Kuleshov in the 1925 film The Death Ray show a woman laughing so freely it’s a shock to go to YouTube to watch the movie and find out she’s a witch—and if the essays that follow are standard academic exegesis, Tupitsyn’s opening shot, 150 pages with art, is a thing in itself.

7 Mekons, “Weimar Vending Machine,” from Deserted (Bloodshot). You put your money in, you reach for what you paid for, and the machine pulls you in, until your face is right there next to the sandwiches and candy bars. If you’re lucky the next person will buy you out, but it’s 1929, and it’s time that’s running out. Forty-two years after it formed in Leeds, England—can that be?—the group is more contemporary than bands that formed last week: more focused on the present moment, on the history of the world, the history of their shared U.K.-U.S. homelands, the history of their own band. With this number the music is as confused as they can make it—a melodramatic “This Wheel’s on Fire” introduction on guitars, a slyly whispered vocal from Jon Langford, a quote from Kurt Weill’s “Alabama Song,” chirpy women going “Nyaa nyaa nyaa” between the lines, then the whole city shouting that it’s all over, that the world as they know it is going down, and then screams, which make history into a present moment. You are there; you can feel it.

8 Dignity Health Found Footage ad (Eleven, Inc.) The 30-second spot shows a man lifting a colt that’s wandered onto the road back over a fence to its mother as two lines from Patsy Cline’s 1958 “Just Out of Reach (Of My Two Empty Arms)” play in the background. But that’s format language: the sound is so preternaturally bright it makes Cline almost physically present. Really, she’s in front of what you’re seeing—and her always slightly stiff delivery, a reach for gentility as a veil over her own chaotic life that provides a pathos that was all her own, sweeps away what you’re seeing, leaving her voice in the air.

9 Jewel, “Body on Body,” from Johnny Cash: Forever Words (Sony Legacy). Kris Kristofferson, Willie Nelson, Brad Paisley, Kacey Musgraves, T. Bone Burnett, Rosanne Cash, Elvis Costello, many more, make songs out of poems and lyrics Cash left behind. It’s earnest and you can hear people trying to convince themselves the material is better than it is. But remember Jewel? After selling tens of millions of records in the late-’90s she hasn’t had a hit for more than fifteen years, and maybe the producers thought she’d say yes to anything. She breaks through—through the piety of the occasion, the song, her career, through herself. She sounds like the greatest movie sunrise ever filmed—the one in F. W. Murnau’s 1927 Sunrise, and that movie was silent. And then comes I’m With Her and Aoife O’Donovan turning “Chinky Pin Hill” into the smile almost everyone else seems to be faking.