1. Rich Kreuger, “Kenny’s (It’s Always Christmas in This Bar,” from NOWThen (RockkinK Music). Years ago in Chicago, in the middle of winter, my friend Bill Wyman was taking me to a bar: “Chicago’s a really friendly town,” he said. “You’ll like it here.” As we approached the place, two burly guys came out and one fixed me, as if trying to figure out what I was doing there. “You haven’t been here before, have you?” he said. His tone wasn’t threatening, but — “You’re going to like it in there,” he said. As Rich Krueger’s sings in this deliriously happy song, “a stranger’s just a stranger here / For less than one half a beer.” That was the place.

I can’t remember the last time I said yes to a song out loud in its first three seconds. In the instant when I realized that Krueger — a neonatologist at the University of Chicago — was something different, I also felt as if I’d been listening to this song half my life. Krueger catches the feel, the cadence, of ordinary talk as he jumps the waves in the sound. He’s rushing inside music that never hurries, as if for him time’s running out but the music knows the place never closes. “It’s like trying to tell a stranger about rock ’n’ roll” except he’s trying to tell you about this bar. You believe him, you want to be there. He sounds like he’s been all around the world without ever leaving home.

2. “Trump bestows Medals of Freedom on Adelson, Babe Ruth, Elvis and others,” CNN headline (November 16th). “The King of Rock and Roll — the true king, and you have to say that,” Trump said at the White House, to reassure his followers that there’d be no truck with any claims for Chuck Berry, Little Richard, Fats Domino or Bo Diddley. Not that the award Trump gave Elvis Presley was worth anything: given that you can now buy a Medal of Freedom, as Miriam Adelson did, the only way it can convey honor now is when someone refuses it.

Still, you have to watch the video of Trump’s presentation to realize how sordid it was. He stands at the podium, smirking. “How Great Thou Art” — which Trump will say he chose — comes up. As the instrumental passage beginning the song plays, Trump smiles, preens, as if he knows a punch line no one else does. Then Elvis sings the first words of the song: “Oh, Lord—” and Trump’s grin widens. He touches his tie, and puffs himself up more than he already has. He looks down on himself, admiringly, as if he’s surveying a national park, then looks around the room, all in one studied movement, as if accepting a silent wave of applause, to acknowledge that that opening was meant for him: he is the lord. The song was cut after those two words.

3. Lady Gaga on The Late Show with Stephen Colbert (CBS, October 5th). Lost in the news cycle: The night before Brett Kavanaugh was confirmed by the Senate as a Justice of the Supreme Court by a vote of 50-48, after being accused by Christine Blasey Ford of sexually assaulting her when she was in her teens, Lady Gaga described the process of repression, denial and self-protection that follows such an attack. “The brain changes,” she said. “It takes the trauma, and it puts it in a box, and it files it away, and shuts it, so we can survive.” She joined the drama that at that moment was convulsing the nation, speaking with deadly seriousness in an almost pedagogical mode, pointing her finger, jabbing it in the air, saying: “But what I believe I have seen, is that when that woman saw that Judge Kavanaugh was going to be put in the highest position of power in the judicial system of this country, she was triggered. And that box opened. And when that box opened, she was brave enough to share it with this world: to protect this country.” To protect this country: Those words were said with a vehemence so strong it could have cracked the Liberty Bell all over again. 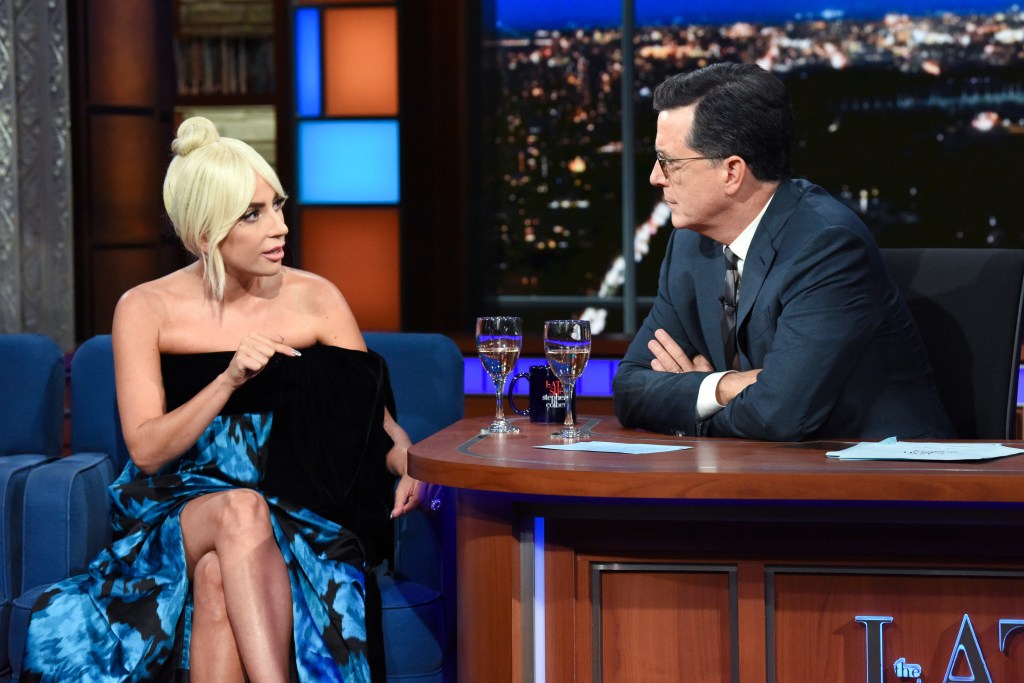 4. Aidin Vaziri, “Sheeran does bland pub show for 40,000,” on Ed Sheeran at AT&T Park, San Francisco Chronicle (August 22nd). “For a little over 90 minutes, fans were treated to just Sheeran, his rotating cast of acoustic guitars and something called a loop station — an effects box that allowed him to sample and overdub his vocals and guitar chords live, layering everything until it sounded like Coldplay minus a billion dollars.”

5. Chicago Plays the Stones (Raisin’ Music). Aren’t tribute albums terrible? The Rolling Stones’ 2016 Blue and Lonesome, their Chicago blues album, certainly was, and this, a Stones-blessed project (Mick appears with Buddy Guy on what I’m just going to call “Heartbreaker” to save space, Keith with Jimmy Burns on “Beast of Burden”), bringing together players who made their mark in the 1950s to musicians born then, is much worse. You’d think that Billy Boy Arnold — whose rickety 1955 “I Wish You Would,” with what sounds like a teenage vocal, is as primitive as Buddy Holly’s “Not Fade Away” — could bring some restraint, a sense of timing and suspense, to “Play with Fire,” but it’s as rushed, as trashed up, as everything else here. The music is like a cut-rate neon sign that’s about to burn out.

6. “Rock and Roll Hall of Fame Class of 2019 Inductees” (RockHall.com). The Zombies: two effectively Beatle-style Top 10 hits in 1965 (think of “She’s Not There” and “No Reply” — which one disappears in the face of the other?) and another one, boring even if the radio loves it, four years later. But when the Shangri-Las — “Remember (Walking in the Sand),” “Leader of the Pack,” “Give Him a Great Big Kiss,” “Out in the Streets” and “I Can Never Go Home Anymore” — three of them Top Ten in 1964 and 1965, one of them Number One, all of them not merely hits, but iconic — have never been nominated, let alone voted in, how can this mean anything at all? I don’t know if Janet Jackson or Def Leppard would agree, but I’d bet Stevie Nicks and Bryan Ferry would. 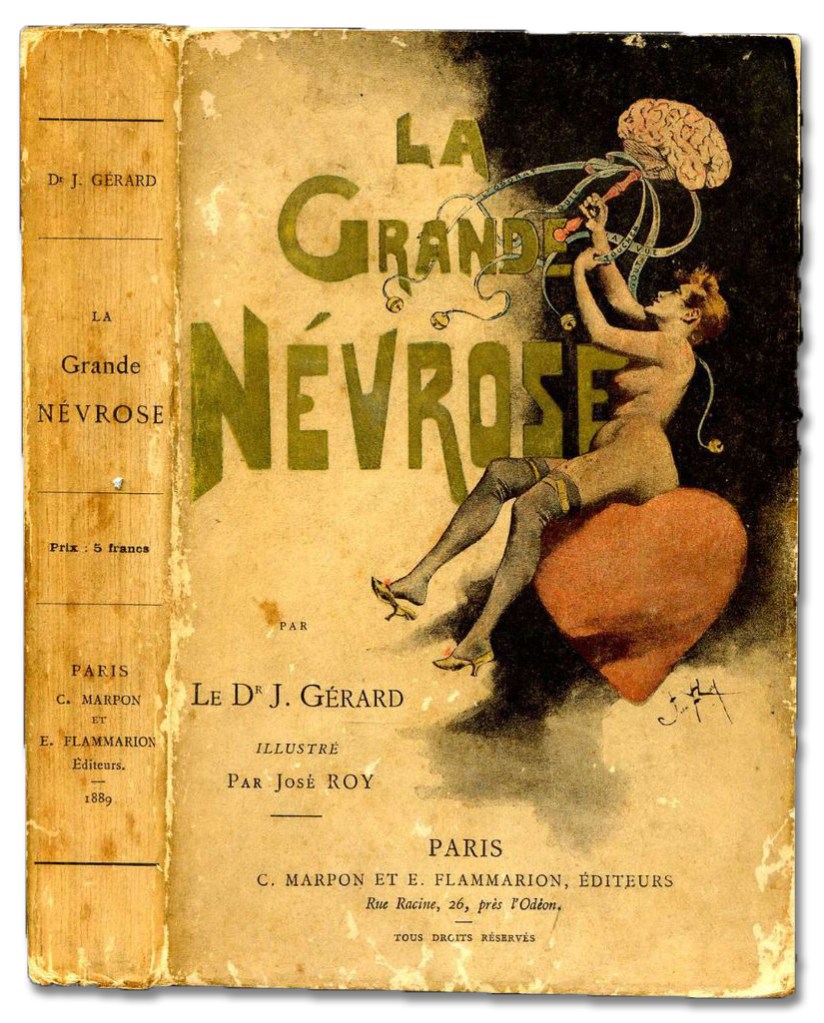 7. Dr J. Gérard, La Grande Névrose (The Great Neurosis, 1889), in Sigmund Freud: Du regard à l’écoute (From Looking to Listening), Musée d’art et d’histoire du Judaisme, Paris (through February 10). In a vitrine near the beginning of this labyrinth-like exhibition (for the narrow gallery spaces, but also the back-and-forth, leaps-and-bounds discoveries of psychoanalysis — of the discovery of psychoanalysis) was this book from Freud’s library. It held the most frightening and suggestive image in the show: a woman, naked except for black stockings and heels, wrestling with an octopus, whose head was her own brain.

8. and 9. John Simon, Truth, Lies & Hearsay: A Memoir of a Musical Life in and out of Rock and Roll (available on Amazon) and The Band, Music from Big Pink: 50th Anniversary Edition (Capitol). In the late 1960s, John Simon may have had the keenest ear of any record producer. He also had the most open heart, the most self-deprecating ego — the horn parts he and Garth Hudson designed and played on Music from Big Pink in 1968 are almost invisible, not so much inaudible as pure texture, a day dream inside an argument. That is why, moving on from the fellowship of the Band — of which he felt so deeply a part that “One day I asked Robbie if could join up. He said, ‘We’ve already got two piano players.’ And that was that” — he was able to make his way through the music business without accusations of betrayal, manipulation, and theft trailing behind him, and why he could write a book without a hint of rancor, complaint, whine or resentment. There is a profoundly Jewish sense of irony here, something you find in comic Jewish novels and memoirs from the 1940s — a conviction that life is a cruel joke and that any escape from tragedy is a matter of undeserved luck. He produced Big Brother and the Holding Company’s first album, Cheap Thrills, which made Janis Joplin a world star. “Did she die in bed?” he writes. “In the bathroom? On the floor? Or was that Elvis? Or Jimi? Jim Morrison? Sid Vicious? Kurt Cobain? Michael Jackson?”

The 50th anniversary edition of Music from Big Pink — with only two of the Band left to see it — comes in a box set with a remixed CD, a Blu-ray version, LPs, a book, for all I know paint chips from the Band’s rented pink house where the music took shape. All you need is the single CD as remixed by Bob Clearmountain, which you can get on its own, and it’s a shock.

It’s displacing how much there is to hear that was never there to hear before, but nothing that was there before is elided or erased. How would Ray Charles sing this song? Richard Manuel seems to asking as he begins “Tears of Rage,” and the answer is at once physical and mystical. You can hear “The Weight” as never before. The opening guitar figure and strum is loud; then the sound steps down a level, as if to say, “Hey, now that I’ve got your attention with a little melodrama, we’ll let the story play out at its own pace.” Levon Helm’s voice is so strong you can feel the muscles in his throat — you realize that here, on the fifth song on the album, you’re hearing him for the first time, and, with Rick Danko and Manuel not behind him but around him, hearing how complete the brotherhood not of the group but of the music itself truly was. As Helm goes on, you hear that the brotherhood comes out of the notion that each person has something to give that others can’t, something they can envy, something they can love. The others’ voices, which have crooned and barked and chirped through the first four songs, were soft and quizzical, soulful and plaintive, but Helm is from another country: tough, humorous, experienced, a roughneck straight out of Mark Twain, someone who’s been around and taken his knocks, and somehow can’t bring himself to knock down anyone in turn — after all, he knows he’s going to spend the rest of his life trying to figure out what Miss Fanny really wanted from him, and if he came through.

10. Chuck Berry, Chuck (Dualtone); Sturgill Simpson, High Top Mountain and Metamodern Sounds in Country Music (High Top Mountain/Thirty Tigers); Sam McGee, Grand Dad of the Country Guitar Pickers (Arhoolie); Doors in Mexico (Goldtone bootleg); Elvis Presley, Way Down in the Jungle Room (RCA); Fleetwood Mac (Columbia); Betty LaVette, Interpretations: The British Rock Songbook (Anti).
I walked into Down Home Music in El Cerrito, where you always find stuff you can’t find anywhere else or didn’t know existed at all, and walked out with this. The Doors record looked interesting because when they played in Mexico City they were barred from playing anywhere else, except it turned out to be an earlier show in Toronto. The Elvis I had, but this version had 17 outtakes. The only one with any life in it at all was Chuck, which came out last year, after he died, and didn’t include a rewrite of “Dear Dad,” when it appeared in 1965 with a letter to Henry Ford from his son Edsel, with the name of a different tycoon’s son’s name at the end.

Thanks to Aidin Vaziri