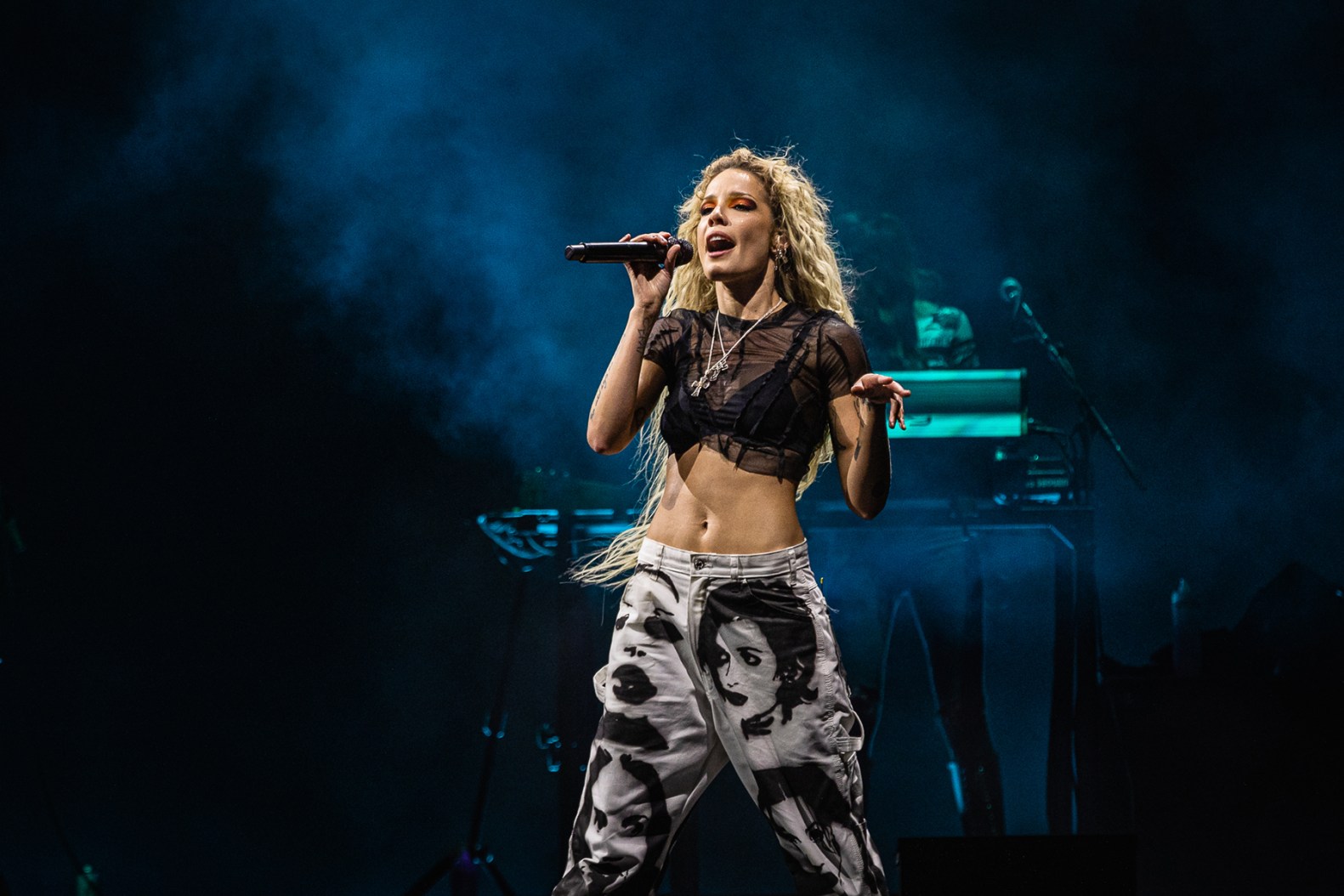 Festival season is officially back in full effect this summer, after disappearing in 2020 and making a sometimes tentative return in 2021. That joyful reality couldn’t have been clearer as Governors Ball returned to New York’s Citi Field for three days of music, headlined by Halsey, Kid Cudi, J. Cole — three of today’s top acts, taking victory laps in front of one of music’s most energized audiences. A wide range of newer artists seized their chance to make a big impression, too. When at Gov Ball, do as the superstars do. Here are the 16 wildest, most unforgettable things we saw.

Call it the cursed set time: First, Migos were supposed to play the 6:30 p.m. slot on Friday, but they bailed out amid breakup rumors and were replaced by Lil Wayne. Then, just hours before his performance, organizers announced that Wayne had dropped out because of “flight interruptions,” and that it would be A$AP Ferg taking the stage instead. “I was just chillin’, and then I got a call from the festival like, ‘Yo Ferg! We need your ass to come right now!’” Ferg said while firing up the crowd. He won them over immediately — though when fans up front complained they were getting too packed in, he stopped the music for a couple seconds and asked everyone to take a step back to keep things safe. —J.L.

Beneath a bright moon and the rumble of the 7 train, Halsey brought a heavy set to the festival on Night Two. The New Jersey native — who first attended the festival eight years ago with dreams of one day headlining, per a mid-set story they told — focused heavily on the more rock-leaning side of their discography, especially the excellent Trent Reznor and Atticus Ross-assisted If I Can’t Have Love, I Want Power. Halsey served up hard rock hero, belting out tunes like Badlands’ “Castle” and Manic’s “3am” alongside highlights from the latest LP. The biggest moments of the set, however, hinged on two newer additions: the live debut of romantic new single “So Good” and a surprise cover of Kate Bush’s “Running Up That Hill (A Deal With God).” Bush’s 1985 song has gotten a Stranger Things boost, climbing to Number Two on the charts, and Halsey’s excellent rendition was a perfect celebration of that success. —B.S.

Coi made sure no one left her set on Friday with doubts about her ability to rile people up. Despite being small in stature, she was the focal point on a busy stage filled with dancers and rapid-fire choreography and let loose, clad in a bright red bikini top. The singer and rapper, who dropped her debut album Trendsetter in April, somehow conveyed both steely confidence and give-no-fucks carefreeness while showcasing some of her biggest songs, like “Push Start” and “Twinnem.”  She never once let the energy dip, and she enthralled everyone watching, including a woman who she brought onstage for an impromptu lap dance. —J.L.

On Saturday afternoon, newcomer Ashnikko gave an enthralling, star-making set. The 26-year-old proved she’s more than her many viral songs, like “Daisy” and “Slumber Party,” both of which have dominated TikTok. In a flame-emblazoned dress, she brought all the energy needed to keep the audience on their toes with her brat-pop sound. It was reminiscent of very early, weirdo-era Lady Gaga. (She even kicked off the set with her DJ playing the Ashnikko remix of Gaga’s “Plastic Doll” off Dawn of Chromatica.) The clear winner of the night was her reimagining of Avril Lavigne’s “Sk8r Boi,” called “L8r Boi,” which turns the titular boi into the villain of the story. “Every single skater boy I’ve been with doesn’t know where the clit is,” she bluntly explained. —B.S.

Headliner Kid Cudi had the task of closing out the first night of Gov Ball, but that didn’t mean he had to sacrifice the weirder, cosmic gloom of his earlier repertoire. He stacked a good part of his performance with some of the trippier, more experimental stuff from the Cudi archives, playing songs like ““Ghost!” and “Mr. Rager” while psychedelic visuals swirled behind him. But toward the end, after premiering his new track “Do What I Want,” he amped the energy up and encouraged fans to go nuts as he launched into the electro thud of “Memories” and “Pursuit of Happiness.” Citi Field turned into a quaking dance floor for a few minutes just before everything shut down. —J.L.

The Swedish pop sensation gave the audience a little extra during her Saturday set. While singing early hit “Talking Body,” the star lifted up her already pretty sheer top to flash the cheering crowd. That fun, fearless and free vibe carried through her whole set as she worked her way through her stacked history of debauched-pop perfection like “Habits (Stay High),” “Disco Tits,” and her latest single, “No One Dies From Love.” —B.S.

Every so often, Governors Ball organizers flashed digital signs exclaiming “You’re Doing Great!” Sullivan’s feel-good Sunday set came off as the musical equivalent of those signals. Sullivan has developed into a poised if still sassy front person, reclaiming Mariah Carey-style melisma as a key part of her impressive vocals. Her music, a warm bath of Nineties-slow-jam hip-hop and R&B, aimed for comforting and uplifting the crowd. Even between songs, which included last year’s “Put It Down,” she offered Oprah-like life advice: “If you’re with someone who doesn’t feel the way you do, say something!”  —D.B.

A lot of things about Aly & AJ’s performance on Friday felt like a flashback in time. The sisters, whom you might remember as constant fixtures on the Disney Channel back in the early 2000s, stepped onstage dressed in Seventies-style vests and flowy bell bottoms, like they’d just time-warped in from another era. But while some of their past hits have enjoyed a renaissance on TikTok lately, they played more recent gems from the album they released in 2021, their first in 14 years. Sparkly songs like “Lost Cause” and “Pretty Places” got festivalgoers swaying, and in between, the duo made time for the causes close to them by pointing fans toward an online petition to support LGBTQ youth. —J.L.

It Won’t Rain on This Parade

Anyone who attended Gov Ball when it was held on Randalls Island knows that the festival has almost inevitably been cursed with rain in past years. That particular location was never quite able to withstand a downpour, plaguing attendees and artists annually with delays, unwalkable miles of thick mud, and even completely canceled days or headlining sets. It didn’t make much sense to continue having a festival there every year — but the 2021 and 2022 weekends have shown that a change in scenery makes a big difference. A little rain didn’t stop the party in Citi Field’s parking lot, allowing the festival to go on as planned and mud-free. —B.S.

The two modern hip-hop giants weren’t officially competing at Gov Ball on Night Three, but they might as well have been, starting their sets a half-hour apart on rival stages. The difference between the two couldn’t have been more palpable. Both confident and faux-humble in his first New York show since last year’s Rolling Loud, Cole — recently seen playing Canadian minor-league ball for the Scarborough Shooting Stars — told the crowd, “I’ve been playing basketball. I came here to see if I could still rap.” He needn’t have worried, since he was welcomed like a conquering hero. The opening “95.South” had the crowd up and pumped right away, but a highlight came when Cole sat on a stool and offered up a meditative version of his anti-materialistic early single “Love Yourz.”

If Cole’s set exuded camaraderie, Carti’s went for something more like a nightmare. Both he and his band were shrouded in fog most of the time, making them eerie silhouettes as the flames burst out and death metal chords piled on. Carti could rarely be seen, but his screams and growls emerged from the darkness. At times it felt less like a show, more like warfare. The dystopian soundscape made the crowd pulse so hard that the grounds in front of the stage literally shook. —D.B.

Soccer Mommy Is Determined to Win

Watching Sophie Allison and her four-piece band on Sunday was like a throwback to some Nineties Lollapalooza set, a time when women were staking their claim to indie and alt-rock. Focusing less on showmanship and more on determination, Allison delivered her tunes, including the new “Shotgun,” with fierce precision, as if she were steeling herself against rocky times ahead. —D.B.

Beneath an overcast sky, Denzel Curry woke the festival up with a much needed jolt of energy. The punk-y rapper blazed through tracks like “Ain’t No Way” and “Clout Cobain” with a fire and a fury. The audience couldn’t help but keep jumping at the Bacardi stage while he was on, leading to some of Saturday’s most incredible mosh pits. —B.S.

De’Wayne has always talked up his love of punk and Lou Reed. But in a set that opened the festival’s third and last day, cred talk turned into action when the artist (who’s reportedly been romantically linked to Willow Smith) and his guitar-drum backup blasted out a cover of the Stooges’ “I Wanna Be Your Dog.” De’Wayne’s look — rock-star-certified black leather pants, painted fingernails and a partial mohawk — was also from the punk playbook, but the energy and screams he brought to the retro game were undeniable. —D.B.

The Atlanta hip-hop artist (and part of J.Cole’s Dreamville Records posse) bought something of a master class in rap history on Sunday. He impressively freestyled and gave a shout-out to specific artists he’s sampled in his tracks, including A Tribe Called Quest (significant given his public complaints about sample clearance issues). “Off da Zoinkys,” his 2018 anti-drug screed, still packs a punch. He only had to pause when he told the crowd he’d accidentally gulped some water — possibly connected to earlier rainfall that lay atop the stage. “That water was sitting up there from yesterday!” he laughed. —D.B.

South Central’s Duckwrth presents himself as a little bit of everything: rapper, singer, visual artist, model. His set was similarly musically eclectic, taking in tracks from 2020’s SuperGood like the bopping “Super Bounce” and the sensual R&B of “Coming Closer” while rocking a full-length green jumpsuit. Even if his musical identity remains a bit amorphous, Duckwrth’s positivity and charm were center stage throughout the set. —D.B.

Skepta had one of the most off-the-wall, adrenaline-fueled sets on Friday as he ran through a crammed set list that included “Skepta Interlude,” “No Security,” “Greaze Mode,” and the A$AP Rocky collab “Praise The Lord (Da Shine)” while also bringing up rappers like fellow British MC Frisco to join him. As the energy got more intense — and the temperature soared — he checked in with the crowd while festival staff opened up boxes of water packs and handed them to people in the audience. —J.L.