Girl in Red: Artist You Need to Know - Rolling Stone
×

Marie Ulven, a.k.a. Girl in Red, stops herself mid-apology — the kind you utter when you think you’re talking too fast or you’re unsure whether the listener gets your drift. “I’m not gonna say sorry,” the 22-year-old musician says firmly, breaking off from a discussion of her new album, If I Could Make It Go Quiet. “I don’t want to be that person who apologizes for everything. I’m not sorry. There you go, Marie. You’re the protagonist.” Even though Ulven is Zooming in from Oslo — with the camera off — her personality crackles across the miles and timezones.

Delightfully verbose, snarkily self-deprecating, and “really bad at boundaries” (her words), Ulven has carved out a place for herself in indie rock by appealing to her listeners’ insecurities and yearnings. Her Girl in Red persona — think Billie Eilish’s self-aware bluster, mixed with a healthy splash of early ‘00s college rock — grapples in equal turns with mental health and sometimes unrequited lust. It’s a combination that’s helped make Ulven a favorite of both the TikTok set and those a bit too old to grasp the platform’s purpose. As she half-jokes to this 30-something writer: “Being on TikTok allows you to stay hip and cool — and sells your information to China.”

Ready or Not: The Fugees to Reunite for Tour Celebrating 25th Anniversary of 'The Score'

Ulven grew up in a little town outside of Oslo and has been writing songs since she was eight (her sister heard her singing an original composition in the shower and recorded it on her phone). By age 14, she’d acquired a guitar and began writing in earnest; she started producing her own music around 2014 after using her Confirmation money to buy a MacBook. Fed on old standbys like David Bowie and the Smiths, Ulven began doing what all kids with a computer and a guitar do eventually: posting songs online. After uploading “I Wanna Be Your Girlfriend” — a fuzzy ode to being more than pals — to YouTube in 2018, things started picking up for the then-teen. 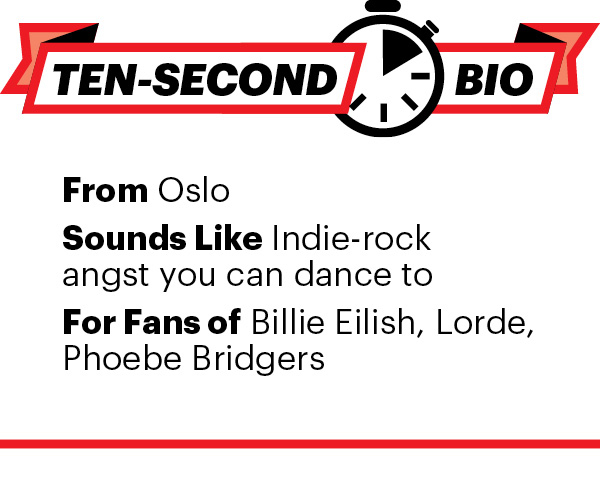 “I’m a very suspicious person. Probably because my dad’s a cop,” Ulven says of the offers of representation she started getting soon after. “Those first few months of 2018 were really intense and really exciting. My mom was not happy with me doing all these meetings; I was trying to finish high school.” The musician did finish school but ended up dropping out of college later that year after moving to Oslo proper. She dropped two EPs: Chapter 1 in 2018 — which featured “I Wanna Be Your Girlfriend” and the deceptively bouncy “Summer Depression” — and Chapter 2 in 2019. The latter included the upbeat standout track “Bad Idea!” and the deliciously spooky “Dead Girl in the Pool.” If I Could Make It Go Quiet, out April 30th, is her first full-length album. She also plays pretty much everything on the record.

“I play a little bit of bass, a little bit of guitar, piano, I sing,” Ulven says. “Oh, there’s also a cello. I bought a cello. I was in a manic period, I think. I think I’ve touched the cello once. I actually dropped my bed on it once. So, like, the only thing I’ve done is touch it once and drop a bed on it. I also bought a saxophone this year. I was like, ‘I’m going to love the sax.’ I’ve touched that once. I’m talking so fast right now. I had so much coffee today.”

Written over the course of 2019 and 2020, the album delves once more into Ulven’s feelings about her sexuality as well as her struggles with mental health. “Pretty much everything that’s inside this album is just a lot of noise — a lot of mental noise,” she says of the title. “I’m not even sure if mental noise is a thing, but sometimes it feels like you have a lot of it — not you, but me.”

The first track, “Serotonin,” produced by Finneas, tosses the listener full-tilt into the cacophony of Ulven’s brain. “I’ve never talked about my mental health like that. I’m talking about worrying that my therapist hates me,” she says. “I stopped answering my therapist because I was just like, ‘You don’t want to talk to me.’ Your mind does all kinds of weird shit.”

With characteristic openness, Ulven reveals that she began contemplating the complexities of her brain after her father was in a car accident when she was 12. “To put it simply, that shit fucked me up,” she says. “I was watching a lot of weird YouTube videos. And while watching these weird YouTube videos, about people with diseases and stuff, I was starting to get really weird intrusive thoughts about cutting my hands off. I didn’t want to go into the kitchen. I was just spiraling into feeling like a very crazy, isolated person, which is just what I’m really trying to say in this ‘Serotonin’ track — just sort of compile all these weird things that I’ve [felt]. Now I know that a lot of people have these [issues], I just feel a lot more comfortable talking about it.”

She touches on this concept throughout the record: notably on “Body and Mind” (which deals with realizing one’s own mortality) and “Apartment 402,” named for her home. “I’ve been living in this really, really small place for a long time. And it’s like, what does that do to you?” she says. “The threshold of moving anywhere sometimes gets a little bit too hard — especially if you already struggle with getting out of bed. So, it’s like laying on a floor and watching the sun hit the dust and being stuck somewhere. It’s weird, man. I keep calling you, man,” she cuts herself off. “What am I? God, I don’t know. We’ve talked for like 30 minutes. You’re my homie now.”

The record also includes more than a few ruminations on love — from the gorgeously depressively “Midnight Love,” about being someone’s reluctant fuck buddy, to the rather self-explanatory rocker “Stupid Bitch.” Then there’s “I’ll Call You Mine,” a song about “trusting someone and opening up to someone and letting them break your walls down and letting them break you down. But only to love you and not to hurt you,” as Ulven explains it. She hopes that this is the song that will be her trademark, the one she’ll keep coming back to when she’s decades older, “like Patti Smith,” she says.

“I’m just putting my fist into the air when the chorus drops,” she says, then cuts herself off. “Wait, hold on. I just want to show you how I look like right now.” The black screen fills with Ulven’s grinning face, framed by a gray hoodie. Her fist is raised to the camera — totally unapologetic.