Producer Giles Martin is a man unsatisfied with perfection. As musical director for the Beatles‘ Love production, it was his radical idea a decade ago to create mashups of the band’s most beloved songs as the vibrant, psychedelic soundtrack for a Las Vegas stage show performed by the acrobats of Cirque du Soleil. He produced the music for the original show and soundtrack album with his late father, Beatles producer George Martin.

In the years since, Giles Martin has become the next-generation guardian of the Beatles catalog. Last year, he remastered 1+, the expanded Beatles compilation album. He also worked on Martin Scorsese’s George Harrison documentary All Things Must Pass, remixed and remastered the upcoming reissue of 1977’s The Beatles: Live at the Hollywood Bowl, and is again at the mixing desk for Ron Howard’s new documentary on the band’s touring years, The Beatles: Eight Days a Week. He also produced Paul McCartney’s last album, 2013’s New.

In July, a revamped Love officially premiered at the Mirage Hotel and Casino with surviving Beatles McCartney and Ringo Starr in the audience. “Remixing and re-cutting the entire show is one of those things I thought I should do, because if you can make things better, make it better,” Martin told Rolling Stone. “I just found more ways to get more out of the tapes, and make them sound clearer and better.” He spoke to RS about following in his father’s footsteps, what he’s learned from studying Beatles master tapes and what Paul McCartney is like in the studio.

When Love first opened 10 years ago, it got rave reviews. Were you already thinking of things to change even then?
Oh, yeah. I loved the fact that people loved it. The creation was borne out of me trying to impress my dad probably and trying to impress the Beatles. Vegas is such a weird place, and the fact that people can come here and walk in this room, you hear this music and you’re taken somewhere else – you leave feeling slightly better.

My fear was, if I was told about this project – George Martin’s son is going to chop up the Beatles tapes to create a show in Vegas – I would have gone, “That’s a really shit idea.” It sounds awful. Then I thought, even if this is a bad idea, I’m going to enjoy this and enjoy talking to my dad about this stuff. When it came out and Beatles fans genuinely liked it, that was kind of overwhelming.

It would seem like you were raised to take this on. Is the reality different?
I was an ambitious and arrogant English person that wanted to write music and play in bands, which I did. Then this came along, and I had the idea of chopping these tapes together. When it got the green light, I spoke to a producer friend of mine and I said, “Jesus, I’m now going to be doing this. I’m not sure I want to be this close to my dad – not emotionally, but professionally.” And he said, “Listen, Giles, you’ve been given this opportunity to do this. Do you have any idea how many of us want to do this?” Alright, OK. It’s overwhelming for me to think about how privileged I am and how grateful I am to get the Beatles’ trust in mixing their music.

“If I was told about this project – George Martin’s son is going to chop up the Beatles tapes to create a show in Vegas – I would have gone, ‘That’s a really shit idea.'”

Was it distant to you as a kid, or always present?
Distant. I wanted to be Stevie Ray Vaughan. I was listening to Free and Humble Pie. I didn’t hear the White Album until I was 19. It was something my dad did.

What was your goal with the music in Love?
We live in a world where music is on wall-to-wall all the time. It doesn’t matter if what I do is as good, but just by tweaking stuff or presenting the music in this way, it makes people pay attention. They start listening.

You’re one of a small handful of people who are intimate with these tapes. Did it change your perception of the Beatles’ music?
Paul said to me, “You know these tapes more than anyone else does.” I’m not being arrogant. I probably do – what’s on the tapes, the breakdown, because I’ve been through them all. It has harnessed a bigger appreciation for what they did. What they did is incredibly complicated and yet intrinsically simple, very efficient.

Take “A Day in the Life,” for instance, an incredibly complex song that is performed simply. On the first track you have acoustic guitar, maracas, George playing congas, Paul playing piano and John [Lennon] singing live. That’s four of them playing together, no edits. Second track: Ringo’s playing drums and Paul’s playing bass. Then you have a vocal overdub and the strings. You listen to the record and it takes you on different journeys; it’s so iconic. The over-familiarity I have with the tapes has harnessed a big appreciation: “Oh, my God, it’s that simple? It’s just these people doing it?” I thought there’d be loads of tricks. 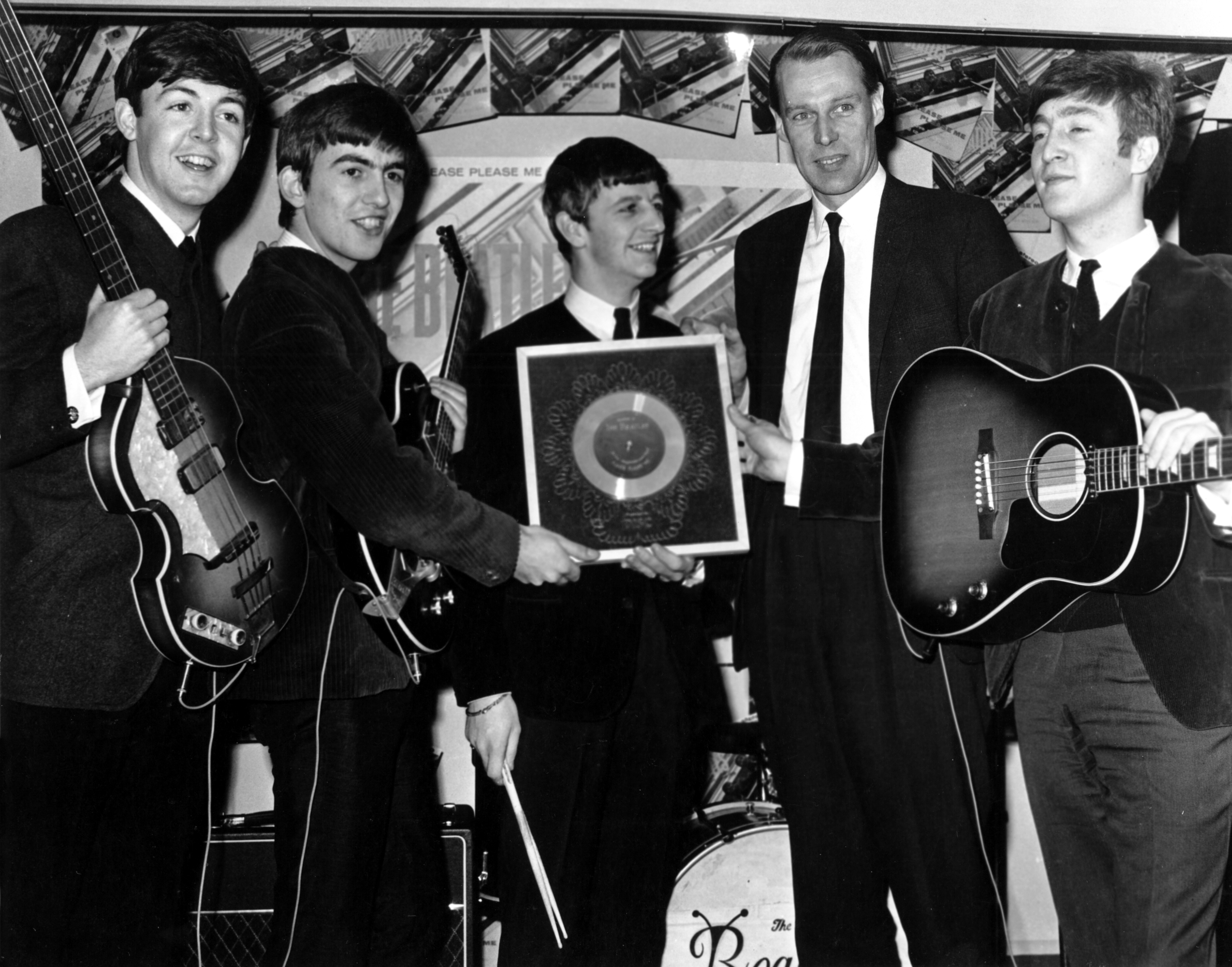 Not a lot of people have been allowed to touch this material.
I think bizarrely my brain suits this. Maybe I’m good at chopping up Beatles music and thinking how it should be visually. It suits my mentality. It’s a bit like surfing – you want to catch a big wave but you’re going to be shit-scared when you get on it. The Beatles music is a bit like that: “Oh, my God, can I still do this? Is this going to be a crash in the show?” You go through this torture. Then you get it right and watch the show, and go, “Oh, that’s all right.”

Did your father have any involvement at any stage of the new revamping of Love?
I talked to him about it. He died at the age of 90 this year. As he said, “You get to your eighties, and you’re in God’s waiting room.” And his hearing suffered in his sixties and seventies. When we first made this show, he was a sounding board for me and we talked about stuff. I didn’t really value what he did until I came over [this time] and he wasn’t here. To be working on “Here Comes the Sun” and I didn’t have him here to play it to – I didn’t know if it was shit! He was always the voice of common sense, which I think he had with the Beatles. But when it came time to refresh this, he was too ill and too old.

I remember at one stage he was lying in bed and I was struggling with something and I brought him the sheet music. He looks at me and goes, “Why did you give it to me for? I’m done.” I said to him before he died, “You know, you did the Beatles, Dad. Imagine how many people you made happy.” He said, “I did the best I could.” That’s the way he was.

When Love first opened, it was a time when mash-ups were first exploding.
I found the mash-ups quite interesting. And I thought, “What would it be like if a band mashed up themselves?”

Are you familiar with the idea of the Black Album, where fans create their own later Beatles albums by collecting songs from the members’ solo work?
No. That’s a cool idea. It’s funny, I thought about this years ago: I worked on the Scorsese film All Things Must Pass. And I thought, it would be great to have “All Things Must Pass,” “Imagine,” “Maybe I’m Amazed” and “Photograph” as a mash-up – it’s always been tempting for me. Politically, it’s a bit of a minefield for me to be doing it.

That’s the thing about them, the creativity. The sum of the four parts is greater than the individuals. I think they would probably say that themselves. They all made great records, my dad included – his work with Jeff Beck was amazing. But hindsight is a very powerful thing, and you can look back at life and go, “Take a look at that. That moment changed the world.” Very few people can say that.

What did they say?
Thinking back when we did the first Love, I remember “Come Together” – which is all of them playing together, the Abbey Road era. Paul and Ringo came on separate occasions. It sounded good and meaty and you could hear everything. They sat there and listened and they both said the same thing. Paul goes: “I remember this day. God, we were a good band.” Getting him to listen and stop for a second and look back – because people like that don’t look back, and my father was the same – just to go, “I remember how we felt.” That was the thing that hit me hardest.

You worked with Paul McCartney as the producer on his album New.
We had a great time. The funny thing is, he’s the first person I worked with who didn’t compare me with my dad. If you know a family well, you don’t do that. He is one of the most inspiring and creative people to work in the studio with – he’ll try anything. That’s his attitude still.