“The world was opened up for me by Kiss,” said X Japan leader Yoshiki, following a brief performance on his clear grand piano while Gene Simmons stood nearby. Monday night was the Hollywood premiere of We Are X, which tells the flamboyant, frequently tragic story of the Japanese superstar act who found worldwide fame with a colorful collision of thrash metal and classical piano.

Directed by Stephen Kijak (Stones in Exile), the film charts the band’s rocky rise to stardom, as Yoshiki and Co. shatter cultural barriers at home and abroad while suffering through suicides, breakups and reconciliations. Simmons appears in the film, which opens October 21st, suggesting that X Japan’s neon-colored “Visual Kei” style of mascara and Mohawks would have been a huge success in America had they been born in the U.S.

Also at the premiere’s after-party was Marilyn Manson, another shock-rock legend seen in We Are X. “I loved that I got to be a part of it, but I would have loved the movie already since I could relate to it on so many different levels. He has a quiet demeanor but he’s very sensitive,” Manson said of Yoshiki to Rolling Stone. “I’m proud of him as a friend. It takes a lot to put yourself out there and talk about so many fucked-up things. That’s really brave.”

Ahead of the premiere, Simmons visited Yoshiki at his Los Angeles studio to talk with RS about rock as salvation and escape, and where their personal stories converge. The Kiss singer-bassist is teaming with Yoshiki in Tokyo this month for the upcoming Visual Japan Summit music festival and Kiss Expo, and he plans to be at the X Japan leader’s two-night appearance at Carnegie Hall on January 12th and 13th. The two first met when Yoshiki appeared on a 1994 Kiss tribute album with a symphonic version of “Black Diamond.”

“Have you heard it?” Simmons asked, pulling out his cell phone to dial up the track. Soon the reworked Kiss song unfurled in lush layers of strings as Simmons closed his eyes and moved his fingers blissfully in the air like a conductor.

We Are X – KISS from Drafthouse Films on Vimeo.

What were your impressions of Yoshiki when you met?
Simmons: I was first impacted by his presence. Then you dig under and you find what X Japan is all about – if they sang in English, this could be the biggest band in the world. By and large, Americans close their ears to anything not in English. That’s stupid because there’s some great music around the world that we should be listening to. You hear X Japan and you understand why they can play multiple dates in stadiums there.

When did you first hear about Kiss?
Yoshiki: I started playing classic piano when I was four years old. My father use to buy me albums – Beethoven, Mozart, only classical. Then he passed away when I was 10 years old. Then I started going to the record shop. As usual, I tried to buy some Beethoven or Schubert – and I saw the cover of the single “Love Gun,” and I said, “What is this?” I asked the record shop clerk to play this. I never heard this kind of music before. That was very impactful. I bought it and my mother freaked out.

Then I bought Alive II by Kiss. It changed my life. Then right after, I picked up a newspaper: Kiss is coming to Japan! “Mom, I need to go see this!” So my mother is in a kimono, and my five-year-old brother, and we went to see Kiss. My mom was eating sushi and Gene shows up spitting blood and fire and screaming. It blew me away.

Simmons: In those days in Japan, you were not allowed to stand. The police would go around with dogs inside. At the end of each song, you’re allowed to clap. And no [onstage] bombs or the sound of bombs. We had to really mute everything down. But we were so fascinated by the culture of Japan. 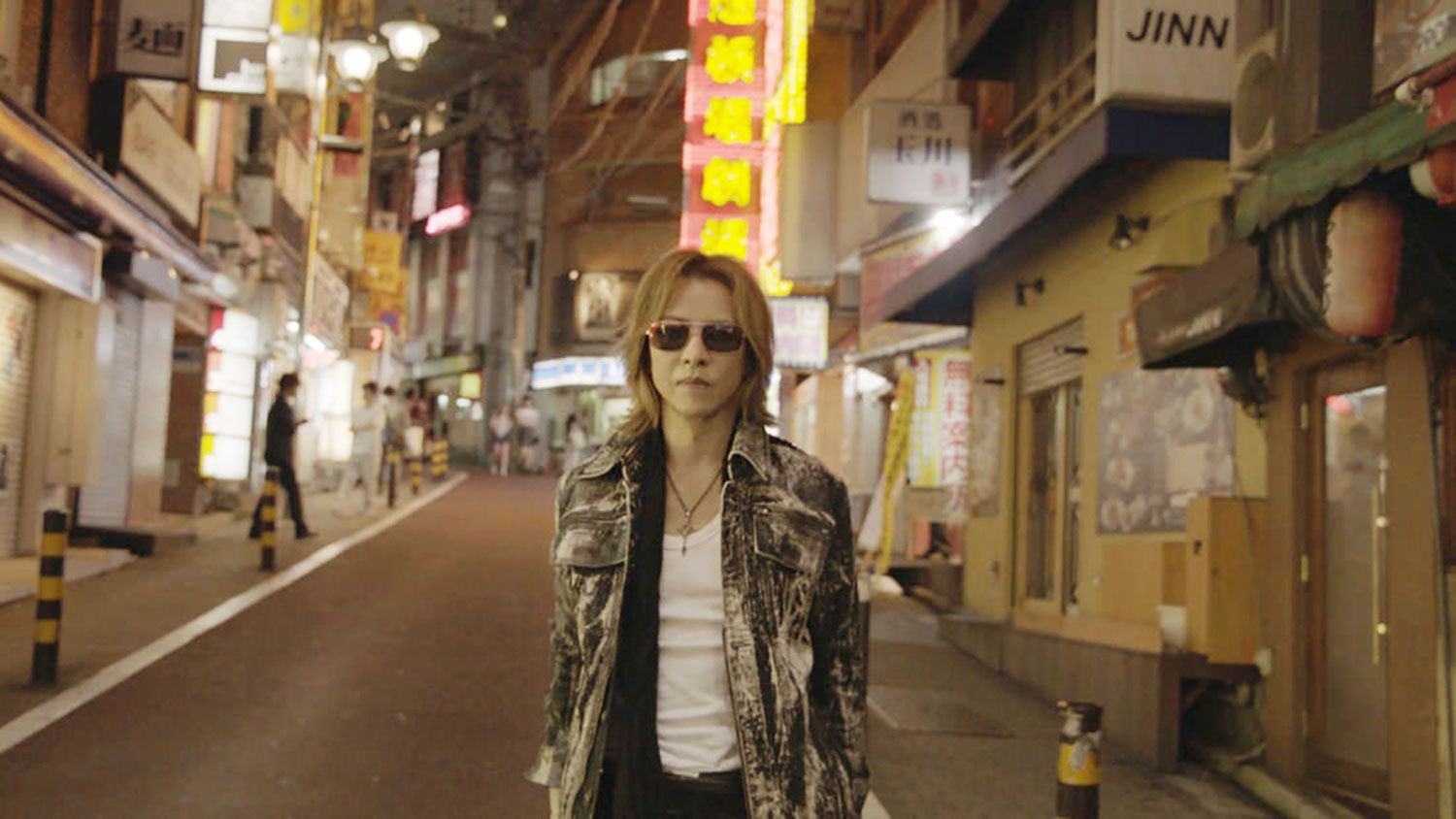 It seems that Kiss has always had a Japanese connection, from your kabuki makeup to the design of the Hotter Than Hell album cover.
Simmons: People thought we were a Japanese band. They didn’t know what we looked like. I was a huge fan of Astro Boy, Mothra. The second record [design] was very Japanese and we wrote our names in the Japanese lettering.

Did that mean a lot to people in Japan?
Yoshiki: Completely. Wow, it’s not only music. It’s the entire show, and the fans are wearing Kiss makeup.

Like Kiss, X Japan’s arena and stadium shows are known for big special effects. Why is that important?
Yoshiki: If you’re going to see the show, I want to maximize the impact. I learned from Kiss: It’s a whole experience. Not only on the stage itself, but looking at the people coming to the show – wearing the Kiss makeup or some kind of Japan costume. It’s an entire experience.

Kiss really pioneered over-the-top effects in rock concerts.
Simmons: If you’re lucky, you don’t think in a straight line. When we grew up, we went to see our favorite bands: the Stones, the Who, Otis Redding and everybody like that. But it was small. My imagination was so much bigger than what it was. So we decided in 1973 to put together the band we never saw onstage. If we had all the money in the world and there were no rules, what do you want to do? Let’s look different! I like monster movies, so why can’t I have Godzilla’s face on my boots?

You react to what the fans want and ignore the critics. The thing that attracts me to Yoshiki is this idea of allegiance and dedication to the fans. That’s where we connect.

The documentary shows that a lot of X Japan music is inspired by tragic events in Yoshiki’s life, while Kiss is much more escapist.
Simmons: I think it’s personal. We use the word “I” – “I wanna rock and roll all night,” “I believe in me” and stuff like that. Ours was more outward, an explosion of passion like a 4th of July fireworks show. A lot of Yoshiki’s music goes inward.

Yoshiki: A lot of things inspire me – especially pain. When I first [heard] Kiss, that was right after I lost my father. I didn’t really know what to do with this anger and depression. Rock saved me. You can break drums and scream out loud – if you do that in the street you get arrested. Everything is legit onstage. You can go crazy. I can express my anger. I can cry. Whoa, this is the coolest place! 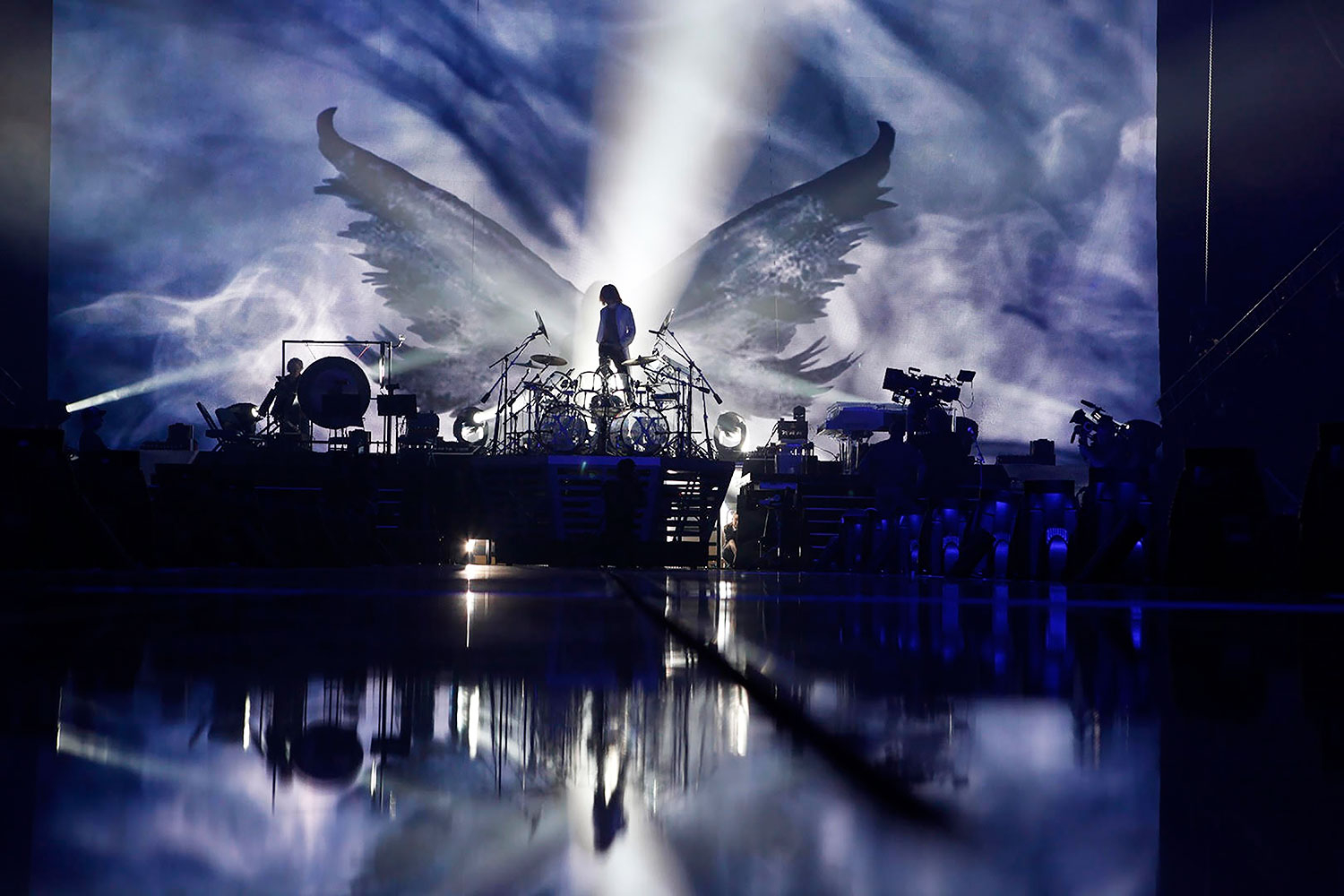 Did you see any similarities between the experiences of Kiss and the story told in We Are X?
Simmons: Immediately. He’s braver than I am. He has no problem showing his passion and crying and pain. I admire that. He doesn’t care that people are looking and judging him. My background is full of pain. My mother was in a Nazi concentration camp and our whole family was killed off. Then early on your father leaves and all you’ve got is your mother, and I was an only child. Then you come to a new country and I can’t speak English.

For me Kiss was the armor, and your family was the band. And even that original band broke up. You can’t rely on anything. At the end of the day, all you have is yourself. And I’m not brave like him. He goes up onstage and it’s like gestalt therapy, like primal scream with Dr. Janov. Shrinks still want you to do that. They want you to talk about the pain to get it out.

Yoshiki: I just do in the stadium the same thing. I scream and I become naked mentally. I give everything to our fans.

What inspires that?
Yoshiki: We almost play each show like it’s the last show. I contemplated suicide when I lost my father. Looking at a bridge, should I jump? Then I saw the rock thing. If I die, I’m going to die onstage. Sometimes I think I shouldn’t do it, but then I jump into the drum set. If I landed in the wrong place, I might lose my eyesight or something. But if I’m going to do it, I’m going to do it to the end.

Simmons: When you see Yoshiki onstage, purging himself, crying and rolling around on the floor, that ain’t showbiz. That’s real.

The documentary looks at the changes that happened within the band. How hard was it when people would leave or die?
Yoshiki: First of all, all X Japan members were leaders of the band. I wanted to have the strongest band. I was always looking for the strongest characters. I started headhunting one by one – except the vocalist, who I met when I was four years old and he happened to have a beautiful voice. We really thought we were going to change the world.

When my vocalist went to the cult, it was the hardest time of my life, just like when [guitarist] Hide passed away. I thought, I can’t do this. I’m going to quit music. Then the government of Japan asked me to write a piano concerto – that was an offer I couldn’t refuse, so that brought me back to music again. Then we got reunited. We did Madison Square Garden.

Now the rock band that changed my life – Gene is sitting next to me, talking about my band. That’s also a miracle. It’s like, if you really believe and really make a commitment, anything can happen.