“Everything happened so quick,” G Flip says. “I actually had a whole month of panic attacks while on tour. I just fully neglected remembering to eat and drink. Then I wasn’t sleeping. I was extremely unhealthy and stressed. It felt like the Hulk punching me in the chest.”

The singer, who is 25, lives in Melbourne, and was born Georgia Flipo, sounds at peace and looks self-confident as she recalls one of the worst times in her life. She’s got on a ball cap and Fast Times at Ridgemont High checkered deck shoes, and she’s leaning back in a chair in her publicist’s midtown Manhattan office. As she tells the story of how her pop-music career exploded, she speaks in long, unbroken, almost cheery bursts that seem at odds with her story — because she made it through the other end.

Last year, she put out her debut album, About Us, a confessional diary of her breakup with the love of her life, whom she has since reconnected with. But for all of the album’s aching acrimony, she never gets lost in it: Her melodies are catchy, her music makes you want to dance, and it all has a vibe that stays with you. She sings about partying too hard and getting into trouble (“Drink Too Much”), persevering when she’s feeling down (“I Am Not Afraid”), and pining for her lover (her breakout single, “About You”). It made it up to Number Six on the Australian chart, but G Flip’s rise happened a lot faster.

Three years ago, she was an out-of-work drummer who had played in every kind of band imaginable — pop-punk, prog-rock, alternative, something she calls “a pop girl band” — but she was still building up the nerve to step into the spotlight herself. At her mother’s insistence, she’d gotten a degree in drum performance as a fallback (“I was like, ‘I don’t need a backup, Mum,’ no way!” she dramatically recalls today) and at that point, she was falling back on it, teaching drums. In private, though, she was also learning guitar, piano, and how to use recording software, as she figured out how to turn the melodies running through her head into songs. She gave herself two months to go crazy — her “Drink Too Much” period — and then she got down to business as a solo artist. “I’m so well behaved now,” she says. “I used to be a party animal back in the day, but now I’m way more healthy, eating and drinking a lot — drinking water.”

As she worked on her songs and fine-tuned her live set, she went full MacGyver and made herself a bass drum that lit up. She also studied her favorite artists, like Haim, and got an uncomfortably up-close look at how they handled a stage. “They came to Australia, and I wanted to be in front, so I stood in front of the stage the whole day,” she recalls. “I pissed my pants twice.”

Part of her Haim fandom, though, comes from her love of producer Ariel Rechtshaid, who has worked with Haim, Madonna, Adele, and now G Flip herself. It turns out, after hearing “About Us,” he was a fan of hers, too. “G Flip is a phenomenal musician,” Rechtshaid tells Rolling Stone. “She’s a strong songwriter and has a very authentic voice, and she is a badass producer.” 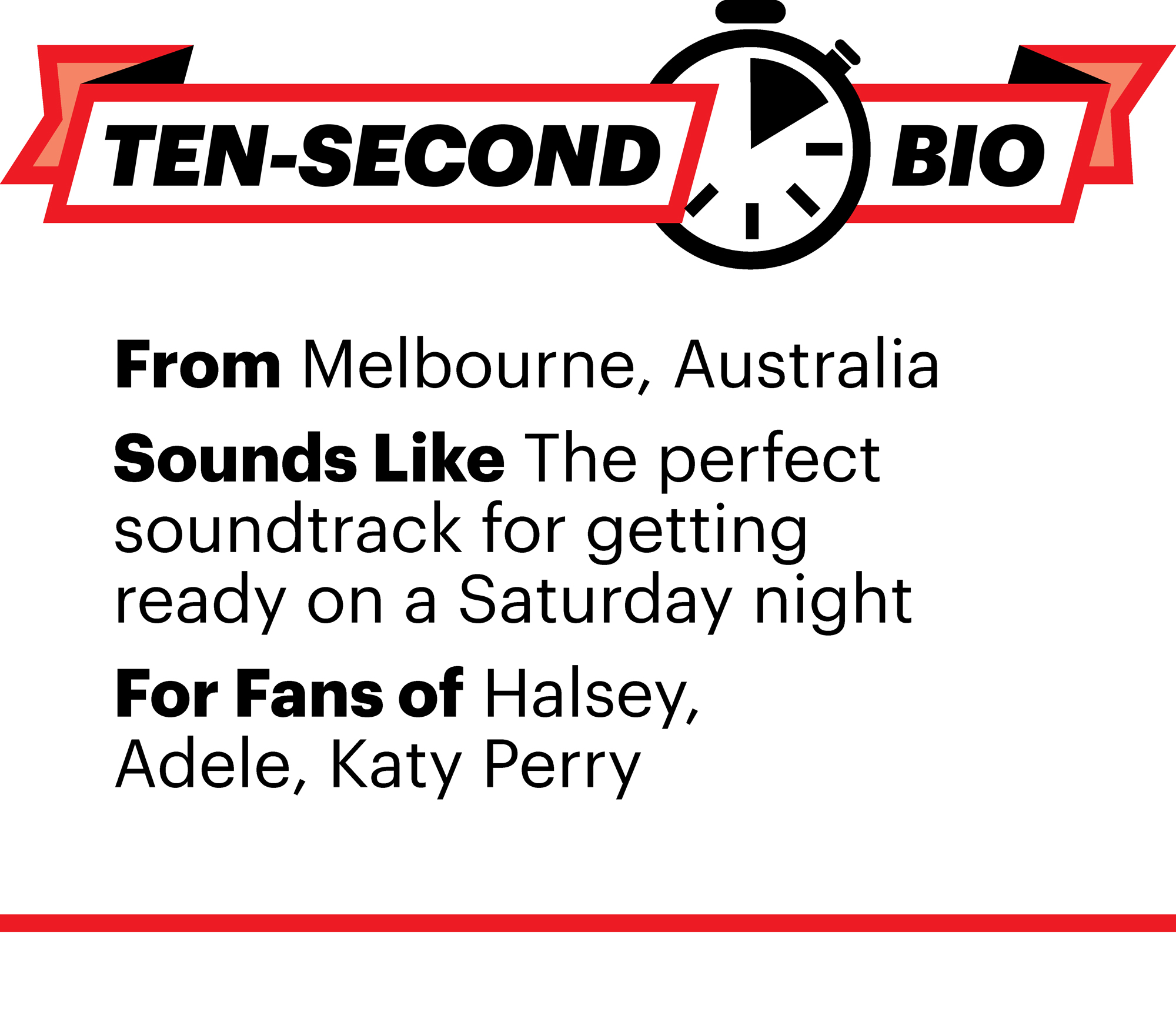 In March of last year, G Flip got onstage for the first time by herself at South by Southwest. Three weeks earlier, she’d released “About Us” as a single — Rechtshaid describes the song as “pretty magical” — and built enough buzz that her four sets became some of the fest’s most talked-about performances. Although she’d prepped for the performance several times with her bandmate, Toothpick, she ended up doing the whole set without be able to hear herself — “Thank God we rehearsed it,” she says — and it was a success.

It was on from there, as she sped up her work on the About Us album, teaming with producers and songwriters in Australia and the U.S. Shortly after her South by Southwest gigs, she flew to Los Angeles to work with Scott Hoffman, the multi-instrumentalist known as Babydaddy in the Scissor Sisters, and they perfected a catchy, mid-tempo song called “2 Million.” It was an eye-opening experience for G Flip.

“I was like, ‘Holy shit, I’m writing a song with someone from the Scissor Sisters, this is so cool,'” she says. “I was thinking how crazy it is that my life is expanding so quickly. Three weeks ago I was in my room playing these songs to the walls. And now I was at South By playing my first show ever in front of heaps of people. Then I met Scott and I was telling him this, and he started playing an F to a C, and then I started going [drumming and snapping]. He just grabbed a mic and got my foot and me clicking, and then we opened up the screen door and let the birds chirp and looped that. I reckon in an hour or two, the whole thing was done.”

Liv.e Is Ready for Her Rebirth

“She’s confident but gracious,” Hoffman tells Rolling Stone. “It must be an Aussie thing. … I remember that she kept talking about the video for the song, the video that was appearing in her head as we wrote. That’s pretty inspiring. I think she really wants to make timeless music. I dig that, and I’m excited to see what’s next.”

G Flip found some comfort in writing and recording “2 Million.” “Every lyric it’s just expanding and expanding until all that’s left in the world is just my lyrics that I’ve left behind once I die,” she says. “It’s a bit morbid, but it’s intertwined with a love story. The second verse is almost like wedding vows.”

When she first started getting anxiety attacks in September 2018, she didn’t know how to deal with, because, in her words, “I used to be so ignorant to other people, like, ‘Why are you so stressed?'” But she turned to that song and found it soothing. “A lot of the plane rides I had around that time never had Wi-Fi, so I only had the music that was on my phone,” she says. “And ’cause the whole aesthetic of that song is so breezy and calming, that was one of the only songs I could listen to and it would prevent me from having panic attacks.”

She has since gotten therapy and learned how to, she says, “keep your brain healthy.” Her girlfriend, the one she wrote most of the songs on About Us about, also suffers panic attacks, and after they reconnected — which occurred when the girlfriend showed up out of nowhere, asked what G Flip had been up to, and proceeded to hear all of G Flip’s innermost thoughts in her songs — they’ve learned to support each other.

Now that her life is as stable as it can be for an in-demand musician, G Flip has started looking ahead to what’s next. “I’m getting weird and experimental at the moment,” she says. “I just want to literally get a bagpipe player and sample it, put it through a crusher and, like, destroy it and see what kind of weird sound I can come up with. My music after this album is a little bit more experimental with style and genre, just mixing things up a little bit more.”

But until she’s ready to release those songs, she’s still deep in the world of About Us. She recently released a new video or the album’s “Stupid,” and the Australian equivalent of the Recording Academy nominated her and her music for three ARIAs, including Best Breakthrough Artist and Best Independent Release. Plus, she’ll be back touring in North America in 2020.

These days, she’s happy with the pace of her career. By her estimation, it’s what she’s been working toward her whole life. “Everything I’ve done has led me to this,” she says. “While I was sitting back on drums for years, I was watching how the lead singer interacts with the crowd, how the bass guitarist moves, and I was piecing together what my show would be like in my head. I’ve tried to make myself prepared for this upward trajectory. It feels like I trained the whole time, so when it arrived, I was ready to go.”