Flying Lotus: Inside the Mind of a Mad Beat Scientist - Rolling Stone
×
×

“Is this Grape Ape?” asks Steven Ellison. He picks up the baggie of medical-grade marijuana and gives it a loving sniff: “Mmmmm. That’s one of my favorite strains.”

At 6 p.m., Ellison – better known as Flying Lotus, the DJ and producer whose fifth LP, the cosmically adventurous EDM-jazz-hip-hop suite You’re Dead!, recently cracked Billboard’s Top 20 – has just climbed back onto his tour bus, which is parked outside the Boston club where he’ll play a sold-out show later tonight. The inside of the bus looks pretty much like what you’d expect from a vehicle belonging to the guy who made the year’s trippiest album: rainbow-dyed crystals set into the ceiling and walls, weed everywhere, an incense stick smoldering in the sink, a weird eye chart (A X YUIZ ÅDKVY . . .) hanging near an almost empty bottle of Hennessy.

Flying Lotus Says New LP 'You're Dead!' Will 'Mess Up the Game'

The 31-year-old, six-foot-two artist stops for a second to say hi to the handful of tourmates and buddies burning down joints and playing the swords-and-sorcery game Diablo III on Xbox in the bus’s front room. But he doesn’t sit down to join them, instead heading straight to his bedroom, where he flops into bed and shuts out the world. His good friend and musical foil Stephen Bruner, a.k.a. bass wizard Thundercat, shrugs as Ellison closes his door. “Lotus likes to stay on the bus,” Thundercat says. “It’s just how he is.”

Over the past eight years, Ellison has established himself as a collaborative equal to visionaries like Erykah Badu and Radiohead’s Thom Yorke. “Some of the most exciting things that have happened to me recently have been when Fly Lo dragged me to Low End Theory,” Yorke told Rolling Stone last year, referencing the hip L.A. club night that Ellison helped make internationally famous. “The music’s bonkers.”

You’re Dead!, featuring A-list rappers including Kendrick Lamar and Snoop Dogg, is taking Ellison even higher. Hours before the show, there are already dozens of young fans lining up outside the club, and every few minutes one of them knocks on the bus’s door in hopes of meeting his or her hero. They all get turned away. “I’m just a moody person,” he says when he finally invites me into the room where he’s been hiding all evening – a plusher space with keyboards lying around – at 9 p.m. “I need doses of excitement. I don’t like to be in the thick of it all the time. And that includes being around people.”

Ellison traces his withdrawn nature to his childhood in Los Angeles’ San Fernando Valley, where he was raised by his single mother, who dreamed of being an actress, and his grandmother, a former Motown songwriter (she penned Diana Ross’ “Love Hangover”). “I was taught to keep secrets,” he says, taking a hit off an asthma inhaler. “In my house, no one ever really knew how anyone felt. It was always like, ‘Everyone’s fine, it’s all good!’ – even if it wasn’t. People don’t like to confront the real things.”

The Valley, for Ellison, was a place of extremes. “On one end, it’s this suburb that feels suspended in time,” he says. “Then there are all these pockets that are really horrible and ghetto.” He got to see both sides as a kid: “There were times when the money was there and times when we were broke as fuck. Sometimes we didn’t have a phone or good food.” 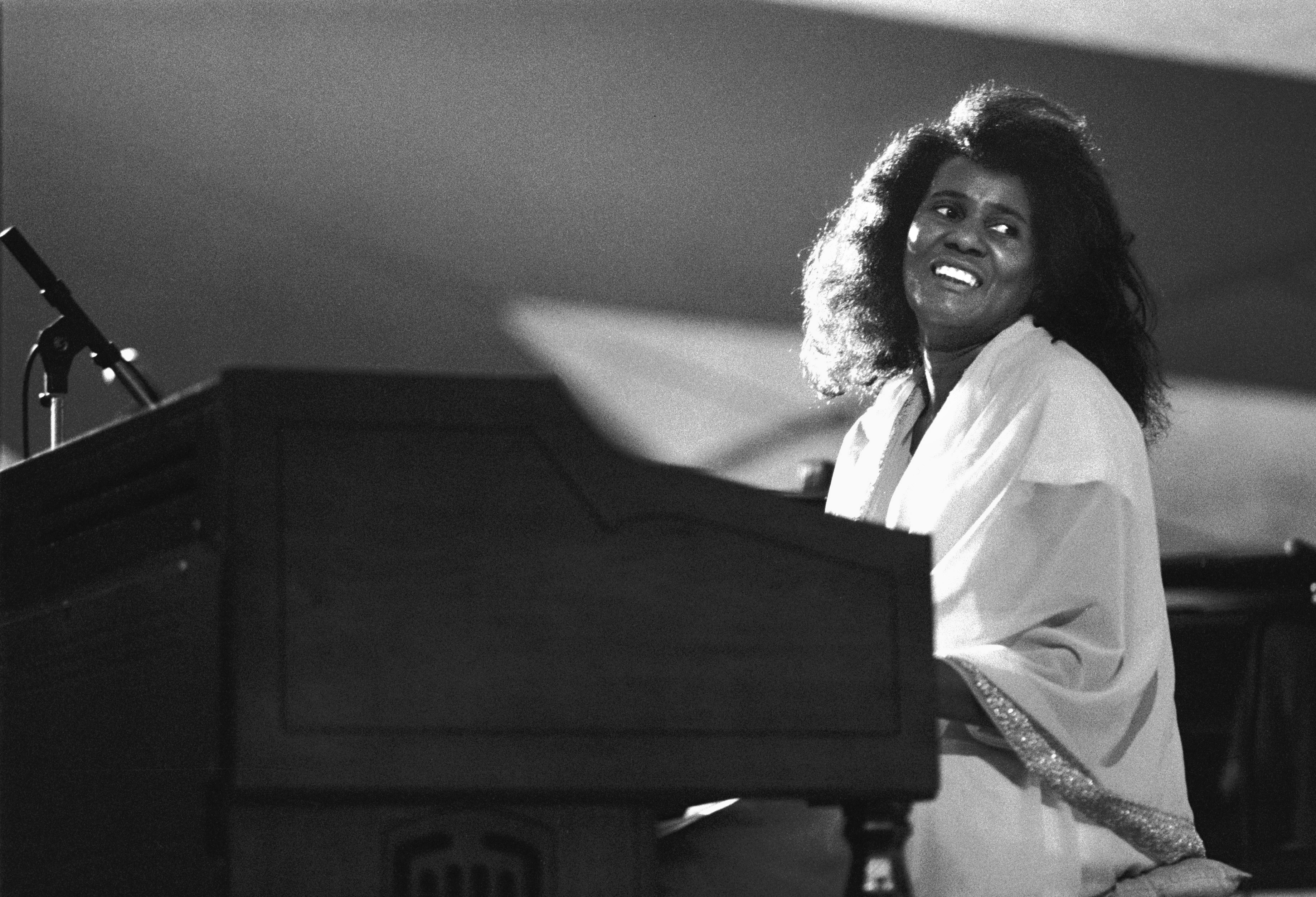 One constant at home was music. Ellison’s great-aunt, Alice Coltrane – John Coltrane’s widow and a brilliant avant-garde jazz artist in her own right – was a major presence in his early life, and he has fond memories of watching Carlos Santana and Branford Marsalis play the Coltrane festivals that his family helped organize in L.A. Even so, Ellison felt stifled by his immediate surroundings. “There’s no art in the Valley, no creative things happening,” he says. “People get stuck there for their whole lives. I grew up thinking that I’d never be anything.”

A social misfit at school – “I never went to prom, never went with the majority” – Ellison started getting high at age 14. “I was the kid who did weed first in my circle of friends,” he says. “It was like, ‘How do I make life a cartoon?’ But then I was the druggie, the weirdo. Kids would say, ‘I don’t know if we can kick it anymore.'”

Ellison started hanging with a tougher crowd – “kids who shot motherfuckers, grimy motherfuckers who robbed people and shit, because they were the ones who were getting high.” Soon, he’d moved on to selling weed and acid. At 16, he was busted for telling a narc where to find some pot. “I didn’t have anything on me, but apparently that’s a crime,” Ellison recalls sourly. “I got kicked out of school, and they sent me to some fucking Narcotics Anonymous shit.”

The probation program, where he was grouped with 30 or 40 other juvenile offenders, was nothing like what Ellison expected. “It was like the Breakfast Club of quote-unquote bad kids,” he says. “I felt like I finally found my crew. There were girls who had been abused by their parents; there were gay kids, which was the first time I’d been exposed to that. It was an exposure to the real. I got a crash course in diversity.”

By the time he graduated from high school a few years later, Ellison had learned how to channel his feelings of alienation into creativity, making hip-hop beats on a Roland Groovebox sequencer and soaking up left-field sounds – everything from electronic tricksters like Aphex Twin and Squarepusher to underground-rap lords like J Dilla and Madlib to “weird chill-out compilations.” Not long after he started college at Los Angeles Film School, a friend showed him how to program music on a laptop. “I was like, ‘That’s how I want to get down,’ ” Ellison says. “I started missing History of Film class and making beats that no one cared about.”

At first, Ellison had to hand out home-burned CDs to random strangers and family members. “My mom would say shit like, ‘Why does it sound like a garbage can getting thrown out the window?'” he says. But by his midtwenties, he was a key player in the progressive beat scene coalescing in L.A.; he released his debut album in 2006, and signed the next year to the esteemed British label Warp.

In late 2012, Ellison set out on his most ambitious project yet: a concept album about mortality. “I wanted to make something that felt like the moment of death and whatever’s after that,” he says. “Ironically, You’re Dead! was the most fun I’ve ever had making music.” Most tracks began as wild two-man jazz improvisations with Thundercat, which Ellison would then digitally distort, edit and elaborate into a future-fusion bitches’ brew potent enough to fry Miles Davis’ brain. “It’s this flourishing, amazing creative energy,” Thundercat says of the sessions. “An explosion – bam! It’s like Russian roulette. You sit back at the end of the day like, ‘What the fuck just happened?’ ”

The album’s somber theme ties into some of the painful losses Ellison has experienced over the past decade, from his mother to Alice Coltrane (“I just wish we could have worked on music together”) to collaborator Austin Peralta (a gifted pianist who died of pneumonia two years ago, at age 22) to an old friend from his teen probation program. On another level, Ellison says, it’s also about the unexpected way his own career has evolved. “For a while, I felt like the scene that I was drawn to, the thing that I helped create, is over,” he says. “That shit is dead. We’re already in another era – even making an album is old-school, you know?”

He doesn’t sound particularly bummed out as he says this. In fact, he seems kind of excited. “I like to do things that challenge me,” Ellison says as he leaves the bus to play tonight’s show. He grins. “I don’t know what’s going to happen next. That’s the fun part.”