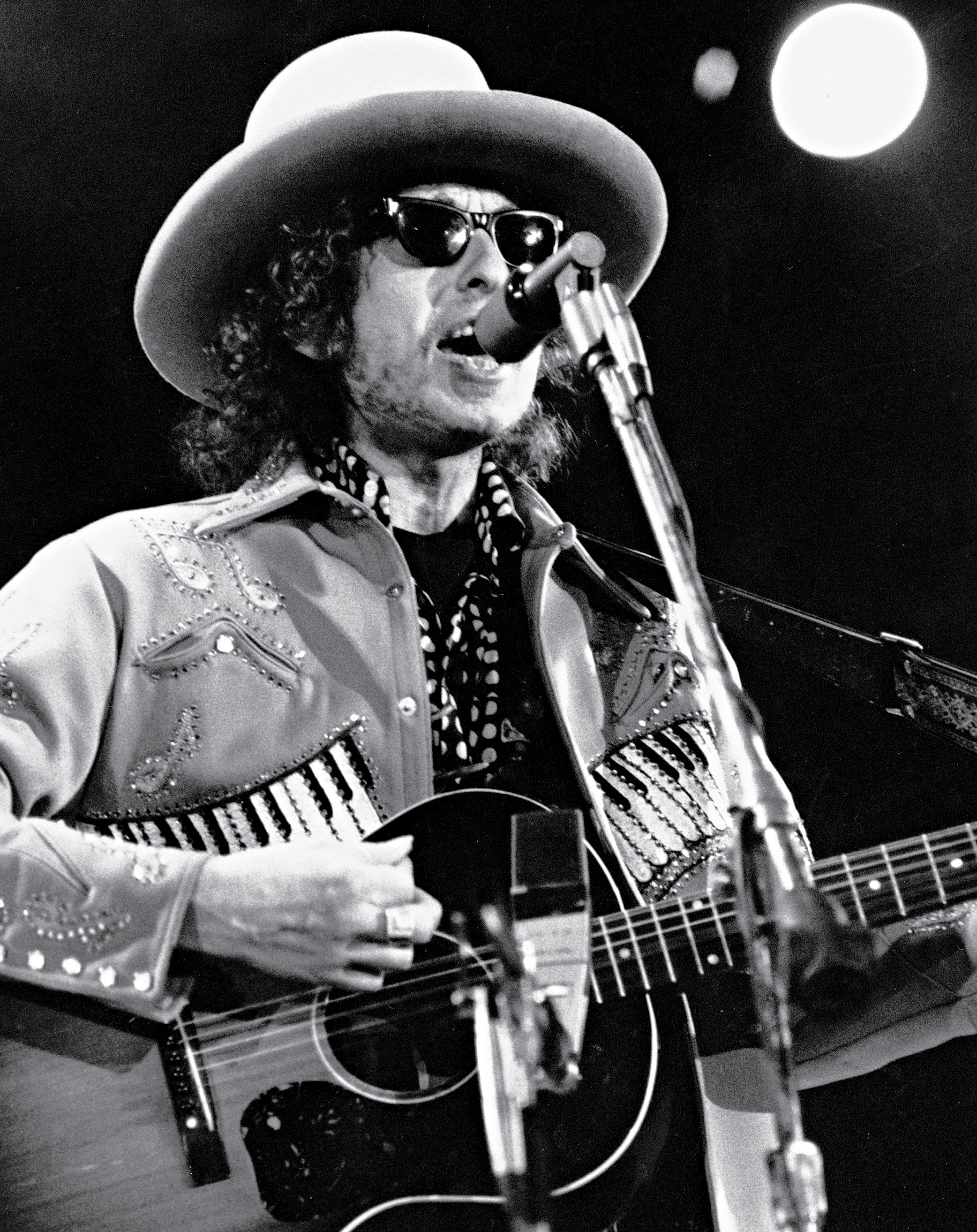 The trucks began arriving in Tulsa in March 2016, each filled with priceless artifacts from Bob Dylan‘s past. Open up one box and see a handwritten draft of “Visions of Johanna” on yellow legal paper with alternate lyrics (including mentions of “nightingales” and “infinity codes”). Look inside another and find the leather jacket he wore at the 1965 Newport Folk Festival, and the guest list for a 1974 show at Madison Square Garden (Yoko Ono got two tickets; Allen Ginsberg got four). Another has a 1969 letter from George Harrison: “Dear Bobbie, Thanks for Nashville Skyline, it is beautiful. Love to you all.”

The collection is still arriving in stages at Tulsa’s Center for American Research at the Gilcrease Museum, but it will eventually include about 6,000 largely unseen items stretching back more than 50 years, culled from Dylan’s exhaustive personal collection. It’s the result of a reported $15 million–to–$20 million deal between Dylan and the George Kaiser Family Foundation that will give the material – which also includes digital and video files – a permanent home in Oklahoma. The public will be able to see a curated set of items when a planned Dylan museum opens downtown in two years or so, but accredited Dylan scholars and select journalists are already combing through some of the memorabilia in a secure room at the Gilcrease – and it’s clear that the contents of the archive could revolutionize Dylan scholarship. “It opens up a world to Dylan scholars that we didn’t know existed,” says Clinton Heylin, who has written eight books about Dylan.

Robert Polito, the first scholar allowed access to the archive, is researching a book on Dylan’s work from the past two decades. On a June afternoon, he’s sitting in front of a box filled with papers from Love and Theft, along with a business card from a Santa Monica boxing gym on which Dylan scrawled the phrase “I’ll get as far away from myself as I can” – a rough version of a line in 2000’s “Things Have Changed.” “For the first time,” says Polito, “it’s possible to follow a song from a notion on a hotel notepad through multiple drafts and then into multiple versions of recordings, sometimes with different lyrics or different arrangements. Going through all of it is totally overwhelming. I’m a little bleary from all there is to pay attention to.”

The archive will also house digital copies of the raw session tapes from every one of Dylan’s studio albums, though the master tapes will remain safely tucked away at the atomic-bomb–proof Iron Mountain storage facility in upstate New York. Visitors will also be able to access audio from all of his recorded concerts during the past five decades. Many of them were taped by the Dylan camp – including every show on the Never Ending Tour – but the archive has also turned to fans for audience recordings to fill in the gaps. “Things always weirdly pop up,” says chief curator Michael Chaiken. “We just got the complete recording of the 1961 Carnegie Chapter Hall from the engineer. He did two sets, but half of it has ever been out there. We have the first generation original tape. And I think from 1966 on they have almost all the shows in one way or another, whether they are soundboard or audience recordings.”

To guard against bootlegging, the archive will maintain the audio files on a secure, offline network accessible only by three computer terminals at the library. Employees are still in the process of transferring many of the audio files, though they do have John Wesley Harding outtakes that have never been heard by fans. A click on the first take of “As I Went Out One Morning” reveals a drastically slowed-down, dirge-like rendition of the song.

In order to gain access to the material – which is housed in a climate-controlled, fire-resistant room monitored by 24/7 security – scholars or journalists will have to outline exactly what they want to see. Cameras and recording devices will be completely forbidden. All notes will need to be taken by hand and the audio files will be watermarked. “Only the part of the archive that people request will be accessible to them,” says Chaiken. “Somebody won’t be able to come in to to look at ’66 stuff and then say, ‘OK, cool, now I want to hear the Blood on the Tracks tapes.’ They will only be able to see a little slice of the collection. We’re keeping it very focused and specific.”

Michael Chaiken is an archivist who has curated the film collections of documentarians like the Maysles brothers and D.A. Pennebaker. His work with Pennebaker included poring through outtakes from the 1967 Dylan documentary Don’t Look Back, a task that began his involvement with the Dylan camp and eventually landed him the coveted job of head curator of the Dylan archive. Chaiken says he assumes Dylan’s motivation for the sale was simple: “If you want to leave any sort of legacy behind, you want the mass of your material at a single place where future generations will be able to come and see it.”

The flood of tourists expected to turn up to see the archive will have to be patient. The Kaiser Foundation is still sorting through bids from architects and exhibition companies to create the Dylan museum, though they do have a site ready: The building that will eventually house it sits next to the Woody Guthrie Center, funded by the same foundation – likely another reason Dylan chose this deal and location. “I would like to see the Dylan center be an active, lively magnet for Dylan fans and music fans from all over the world,” says Ken Levit, Executive Director of the Kaiser Family Foundation. “I’d like this to be an active place of scholarship and I hope it infuses our community with more artists and songwriters and helps it be a gift that keeps on giving.”

The biggest surprises may well be in the collection’s video assets, which include all of the Don’t Look Back outtakes, plus hours of unseen Pennebaker-shot footage from Dylan’s 1966 tour and Dylan-directed outtakes from 1978’s Renaldo and Clara, shot on the Rolling Thunder Revue tour. There is even exceedingly rare footage of Dylan in the recording studio: an hour and a half of a grinning, bearded Dylan working on 1970’s New Morning tracks, including “The Man in Me,” and another 90 minutes of him tracking Infidels in 1983. Another hour of previously unheard of 16mm film captures Dylan hanging out with the Band (and Tiny Tim) during the Basement Tapes era; at one point, they’re playing cards.

Rolling Stone was allowed to sift through about 15 boxes from the collection, each one packed with revelations. One folder included the complete contents of Dylan’s wallet from 1966, along with Otis Redding’s business card and an address book featuring Lenny Bruce’s contact information as well as scrawled lyrics. Another box was full of lyrics from 1965. The manuscripts reveal that “Just Like Tom Thumb’s Blues” was originally called “Just Like Juarez,” and that at one point “Ballad of a Thin Man” began with the line “You walk into the room with your hatchet in your hand.” The back of a draft of “Subterranean Homesick Blues” contains the beginning of a never-released love song for Mavis Staples, whom Dylan famously proposed to in 1963. “Down in Chicago there lives a queen,” he wrote. “She sings the blues, if you know what I mean/Ah, Mavis/I dream she’s singing in my sleep/But worse, I wake up thinking that I’m in church.” 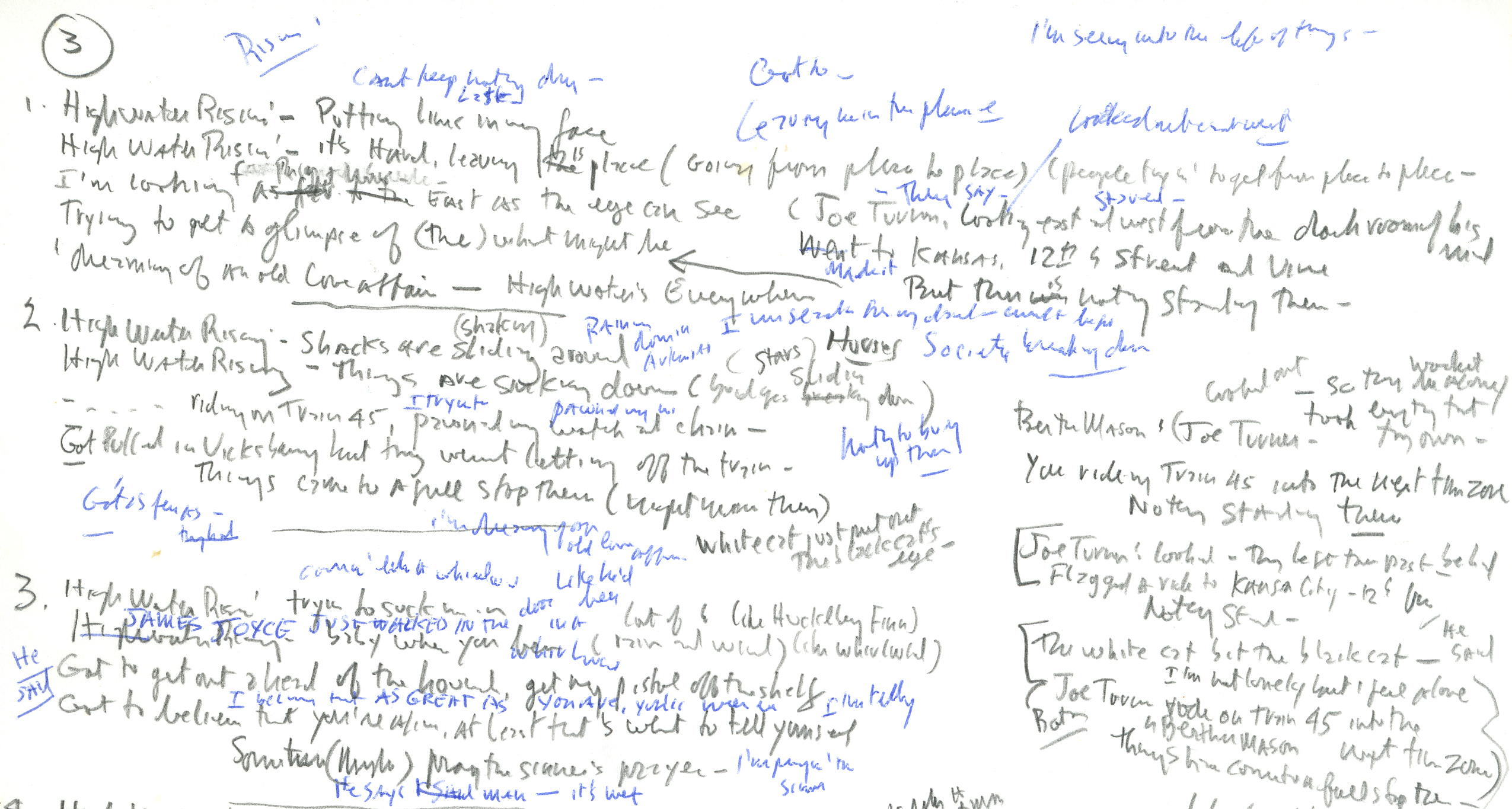 Lyric sheets from the 1960s through the 1980s are typewritten, and recent ones are mostly handwritten in tiny letters on unlined typing paper. A lyric sheet for 2001’s “High Water” shows meticulous craft work in pencil and blue ink, with endless variations and revisions. “He emerges as an extraordinary editor of his own work,” says Polito. “What the archive reveals, what the lyric revisions reveal, is somebody who works very hard, who edits his work very capably, rarely leaves a good line behind, and when he does leave it behind in one song it often winds up in another song.”

Heylin has yet to visit the center, but he’s been in close touch with Chaiken and hopes to visit in November, around the time he releases his upcoming book on Dylan’s gospel years. “I’m interested in learning more about his songwriting process, particularly when he was a mature artist,” he says. “Say he’s working on Street Legal. By that point he was a very self-conscious artist, working on material in a very deliberate way. That album has some of his most poetic lyrics. The final form may not be as great as Blonde on Blonde, but the lyrics are. And it would be fascinating to see the [lyric manuscripts] from that album.”

It will take years for Dylan scholarship to catch up with the materials in the archives, which may well change the way the world perceives him and his art. “It’s very easy to imagine complete books being written about each of his albums,” says Polito. “The material is clearly here.” Heylin agrees. “The deeper you dig with Dylan, the more profound the work becomes,” he says. “And there’s a lot of digging to do now.”