When Tal Wilkenfeld finished recording her album Love Remains in late 2015, the first person she sent it to was Pete Townshend. “Pete was very encouraging of the music,” Wilkenfeld says. “The compositions, the production, the whole thing. Very smart too, in terms of the advice that he gave me from the business front.”

This type of interaction isn’t unusual for Wilkenfeld, a bass virtuoso who, ever since scoring a gig as Chick Corea’s bassist in 2007, has spent the bulk of her career playing with veteran rock musicians like Jeff Beck, Prince, Herbie Hancock and Eric Clapton. “When I get around any of these people, I just want to learn,” the Australian musician says. “I don’t even think about being afraid. It’s not really in me.” The songs—ten dense, riff-heavy tracks with brazen, introspective lyrics—prove her songwriting abilities. On the opening track “Corner Painter,” she confronts a lover head-on: “Just after you met her/You said I changed your life/But that ain’t stopping you/from making her your lovely wife,” she seethes.

Although Wilkenfeld is proud of her solo album, she doesn’t necessarily prefer it over playing bass. “I don’t think it’s about preference,” Wilkenfeld says. “I think that like anything in life, it’s about styles. The pendulum swung so far to one side of me touring as a bassist for so many years, that now it swung all the way to the other side.”

The first time you were playing the Love Remains songs, you were opening for the Who in arenas.
It was an unbelievable experience. To go from never playing this music for people before to then playing these songs in arenas to the Who audience. It was a dream.

How long had the album been finished?
When I finished the album at the very end of 2015, I sent the recordings to Pete Townshend, and I ended up getting the opportunity to open for the Who in 2016. And once that tour had ended, unfortunately, I started losing a lot of friends—when I say a lot, I mean over 20. And also, relatives of mine. I had to take some time to process that, so things went on hold for about a year. I continued to work, but I just put my solo project on the back burner while I really came to grips with everything. It was after that that Julian Lennon introduced me to the head of BMG, and BMG got really excited. They didn’t want to change anything on it—they just wanted to put it out the way I intended.

What’s it like to perform with so many legendary rock stars?
What surprised me – just because rock & roll gets such a bad rap – is how unbelievably intelligent and forward thinking they are – from Mick Jagger to Pete Townshend, Jackson Browne to Leonard Cohen, Jeff Beck. These guys are so smart and so inspiring to be around. Besides the music that they create, just interacting with them personally, and picking their brains about life, it’s fascinating. I’ve learned more from the conversations that I’ve had with these people than the music that we play.

What’s the best piece of advice they’ve ever given you?
I think that what I learned from being around all these people is to just stick with your own instincts and intuition. You know what you need the most. It’s a very unpredictable industry and there’s no rule book. And so, to really trust yourself with your choices both in the music that you’re making and the business decisions you make. 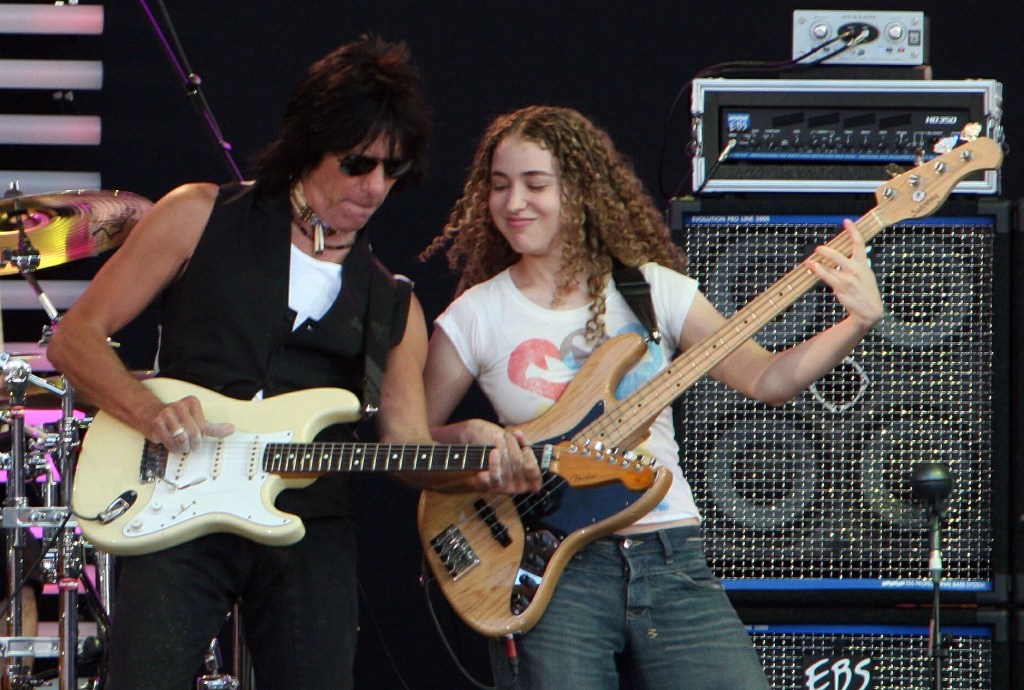 You were playing with Jeff Beck as a teenager. Were you nervous at first?
Fear wasn’t something that showed up often for me. The fear that I experience is the fear of potentially not doing something. I don’t want to be on my death bed with regrets, or what ifs, or I should haves. I want to pass away knowing that I just went for it, and did what I was passionate about doing, and my priorities were in the right places. So, I suppose that that’s where my fear kicks in.

At the 2009 Rock and Roll Hall of Fame, you performed “Immigrant Song” with Jimmy Page and Jeff Beck. What was that like?
My favorite part of that was that when I really went to rehearsal, we rehearsed “Beck’s Bolero,” and we all went [our separate ways] to eat dinner. I was sitting there thinking, “Well, this is a shame. We’re about to jam with Jimmy Page, and we’re not even like rocking out. He’s strumming a 12-string in the background. Let’s play a rocker or something.” So I called Jeff, and he was going down an elevator with Jimmy Page, and I said, “Hey guys, what if we just went into ‘Immigrant Song’ in the middle of ‘Bolero’ and switched the tempo?” And he looks at Jimmy, and Jimmy’s like, “Sure.”

We didn’t rehearse or anything. I just sort of like sung it to them on the phone, like it could do this, and then this. So, we all talked about it, but we forgot to tell anybody that it was happening. I was told after the show that the tech behind the stage almost had a heart attack because. The audience loved it. I was told that that was people’s favorite part of that show, and I think probably because it was so spontaneous and unplanned. That was a very fun day.

“I called Jeff Beck and and he was in an elevator with Jimmy Page. I said, ‘Hey guys, what if we just [played] Immigrant Song?’ Jimmy’s like, ‘Sure.'”

Why the decision to move from bass to songwriting?
I actually started as a singer-songwriter. When I first picked up the guitar, that minute I strummed that first chord, I started crying. It just resonated with me. So when I moved to America, I became very modern focused on instrumental music, and finding a way for the guitar or the bass to be a tool in which I could communicate just as freely as communicating English language. And then, that path led to me playing with the Allman Brothers, which led to the Jeff Beck gig, and Prince, and so on, until I realized that I had left a big chunk of my creativity behind, and that I wanted to get back to that. And that’s when I started making Love Remains.

Jackson Browne is executive producer on the record. Do you see him as a mentor?
I definitely consider him a mentor and a teacher, although he doesn’t like it when I call him a mentor because he’s like, “Well, you teach me too,” but that doesn’t matter. I guess everyone teaches everyone something.

What’s the best part about working with him?
He’s so generous with so many young musicians out there. I’m not the only one. You’ll see him giving guitars away to people. I’ve seen it go all kinds of ways with people that have success. Some people take advantage of their success and turn out to be not very nice. But then you look at someone like Jackson or Leonard Cohen, or any of the other people that I’ve worked with, and they’re so kind and generous.

A lot of musicians play on Love Remains. How did you assemble the band?
I met Jackson Browne at the 25th anniversary Hall of Fame concert at Madison Square Garden that we both did. I told him I was going to sing and write songs, so we said we’d meet back in L.A. He introduced me to Benmont Tench, and we became friends. And one night, Benmont and I decided to go to sushi, because it’s both of our favorite food, and then invited [drummer and engineer] Jeremy and Paul Stacey. I had already met them, but I had never really had a conversation with them.

I said I was making this new music, and we ended up going to my car after dinner. I played them some, and I said, “Well hey, why don’t we all try something? I know this great guitarist named Blake Mills,” who they hadn’t met yet. Benmont and I were playing with Blake like once a week at some point. We went into the studio and just cut “Corner Painter,” and some other beats that ended up on the record. And when I heard that track, I knew that that was going to be the linchpin for the record. Weeks later after “Corner Painter,” I went to the same sushi restaurant with Benmont, and [keyboardist] Zac Rae was at the table next to us, and so we started talking. I made an appointment to make some music with him, and I knew that he was going to be the right person to also play on the record along with Benmont. So, the whole band was essentially made through my love of sushi.

How do you think you discovered your own sound?
I think I’m continually discovering it. I don’t want to sort of fixate on one sound, or say that this is me, because then it won’t be me, because we’re changing every second, so we have to just evolve and let our sounds evolve with us. And that’s very much why I’ve made this record, which a lot of people couldn’t have predicted based on my history. This is the most authentic thing that I could have made, because it really is a representation of exactly where I am, or rather exactly where I was when I made it a few years ago. I’ve already changed again. I think there will be a quicker turnaround on the next one.

Do you already have a next record planned?
I’m very inspired, but I don’t know. Just because I have a natural aptitude for music doesn’t mean I have a natural aptitude for living. I couldn’t have expected myself at 16 to have written this kind of an album. It’s a very personal album that requires learning about life and relationships, failures, heartbreak, and struggle. There are things that need some time, so I feel like now is a perfect time for me to put out a record, because I have enough experience under my belt to actually say something really authentic.

What do you hope Love Remains achieves?
I just have to let it be what it is, and just continue to evolve as a musician, and let things flow. I had hopes for myself as a person, and I’m sure that that will filter into the music that I make. I’m very focused on my spiritual, emotional, and mental growth, for instance, and that’s something that I’ve always been very passionate about, and likely always will be. I meditate every day, and I just want to continue to evolve as a person, and I hope that my music will reflect that.