On Stage 12 on the Universal Studios backlot, a young heartthrob is handed a hollow-bodied electric guitar. Shawn Mendes has admitted to an Elvis fixation in the past, even posting Instagram video of himself singing Presley hits, and now he was about to live out a crucial moment in the life of the King of Rock & Roll.

Mendes was greeted with the usual screams from fans as he stepped onto a square stage crowded with musicians ready to perform the early Presley hit “Hound Dog,” as part of NBC’s Elvis All-Star Tribute, set to air Sunday night. Taped in October, the two-hour program is roughly timed to mark 50 years since Presley’s historic ’68 Comeback Special, which resurrected the singer’s music career late in the Beatles–Rolling Stones decade.

Lukas Nelson: 5 Songs to Listen to When We Realize We're All F-cked

“There would be no current popular music without Elvis,” says Was, a Grammy-winning producer who has worked with the Stones, Bonnie Raitt, Brian Wilson and Elton John. “He not only synthesized everything that had come before him in a really unique way, but he influenced everybody who came after — so you can have Blake Shelton and Adam Lambert influenced by the same cat.”

During two days of taping in Los Angeles last fall, these acts performed on a set that mirrored the design of the original show. At the center was a square “boxing ring” stage, where many of the musicians were collaborating for the first time to honor Presley, who died in 1977.

“We’re taking you back to 1968,” show producer Ken Ehrlich told the audience between songs. “I want you to think back to what that night must have been like to Elvis Presley fans. The record hits had stopped coming. He hadn’t performed in front of an audience in eight years. This was the show he came back.”

Between takes on “Hound Dog,” Mendes talks about his only other encounter with Shelton, when the future pop star came to a taping of The Voice. Mostly, Mendes says, “I think I just looked at you weirdly from afar.”

Shelton smiles. “I remember that, now that you said it that way,” he deadpans in response, then adds, “Your hair looks great.”

Performing later was Fogerty, choosing “Jailhouse Rock.” He remembers watching the original Elvis special when it aired in December 1968, just as his Creedence Clearwater Revival was beginning to erupt as a major force in rock & roll. CCR released their first Top 40 hit, “Suzie Q,” that same year.

“The ‘Comeback Special’ was so meaningful in 1968,” Fogerty tells Rolling Stone. “Like many people my age, especially after the Beatles, I had kind of pushed Elvis aside a little bit. Which was a neat thing about the special — there was Elvis, your long lost friend, looking really good and sounding good. It was great to have him back.”

For her smoldering performance of “Heartbreak Hotel,” Jennifer Lopez mounts the stage in a sparkly sequined jumpsuit and black stilettos. Joining the house band for the tune is guitarist Lukas Nelson — son of Willie, sideman to Neil Young — in a flat-brim hat and playing a Gibson Les Paul Junior from 1956, the year the song was released.

Between takes, an assistant holds up a mirror for Lopez and she makes adjustments. “Damn, you’re so beautiful!” a female fan shouts.

For the second take at the song, Lopez wails and kicks at the air, and Nelson digs deep into his solo, as both guitarist and singer crouch close to the floor. The performance gets a standing ovation. As Lopez leaves the stage, she puts her arms around Nelson and Was, and shares a moment with them.

“She said it’s been a dream of hers to play to front of a rock & roll band, and she got her dream realized,” Nelson says later. “I think she killed it. She did a great job.”

Nelson, who has just finished recording a new album with his band Promise of the Real, says Presley was one of his earliest musical favorites. The first song he remembers playing onstage with his father was “Hound Dog,” at one of Willie’s July 4th picnics. Lukas was about six and played harmonica.

“It’s a true joy to be out there and play with musicians that you respect and love and have grown up with,” he says of the Presley tribute. “Elvis is king.”

On the first day of taping, Shelton walks up in a black leather jacket and is handed his guitar. “Thank you very much,” he says quickly, then realizes his impromptu Elvis impression. “How many times are we going to use that one? Thank-you-very-much.”

The director’s voice from above announces, “All right, guys, here we go … Five, four, three — big applause, guys!” and the crowd cheers on cue.

Shelton is to perform “Suspicious Minds,” a later Presley hit, and looks into the camera. “This masterpiece went all the way to Number One in 1969, becoming one of his biggest hits ever,” he says, reading the teleprompter. The crowd claps a beat and Was bounces to his bass riff, as Shelton grabs the mic for a slow-jam breakdown, his drawl going dreamy.

Talking to the audience, Ehrlich, in white hair and beard, scans the rows and bleachers filled with fans. “Anyone here alive in 1968?”

Up near the bandstand, a single hand goes up. It belongs to Steve Binder, the original director of Presley’s 1968 special. Ehrlich says, “He’s the inspiration for why we’re all here tonight.”

The special, originally titled Singer Presents…Elvis, is just one of Binder’s contributions to musical history. He also produced and/or directed The T.A.M.I. Show concert movie (with its staggering performances by James Brown and the Stones) and multiple variety shows for Diana Ross, Petula Clark and more.

Binder recalls that making the Elvis special was a turning point for Presley, who had lost his edge after a decade of making lightweight Hollywood movies. The British Invasion had shaken the music world he once dominated.

“When Elvis and I met, the first question he asked me was, ‘What do you think of my career?’ I said, ‘I think it’s in the toilet,’” Binder recalls, sitting backstage. “He looked at me at first like he wanted to kill me. And then he broke out into laughter and said, ‘Finally somebody’s talking to me one-on-one.’”

He told Presley that a TV special could reintroduce him and open doors that had closed for the rock & roll icon. Elvis had never starred in his own TV special before and was unsure about it.

“He said, ‘Well, it’s not my turf,’ and I said, ‘Elvis, you make an album and I’ll put pictures to it,’” Binder tells Rolling Stone. “He told me a few months later that was the key to him wanting to work with me.”

The producer-director also learned something essential about the Southern-born superstar. Prior to meeting Presley, Binder says, his assumptions were that Elvis would have the prejudices of “a redneck from Mississippi.” He found the opposite to be true.

“We spent a lot of time together. Martin Luther King that year was assassinated. We were in my officers when Bobby Kennedy was assassinated, so we had a lot of time to talk about social issues,” Binder recalls. “I thought, nobody knows this about this guy. When I put that show together, it was a United Nations staff — a Puerto Rican choreographer, black choreographer, everybody came from different faiths, religions and countries. And I didn’t see any sign of prejudice and I wanted to get that message out more than anything.” 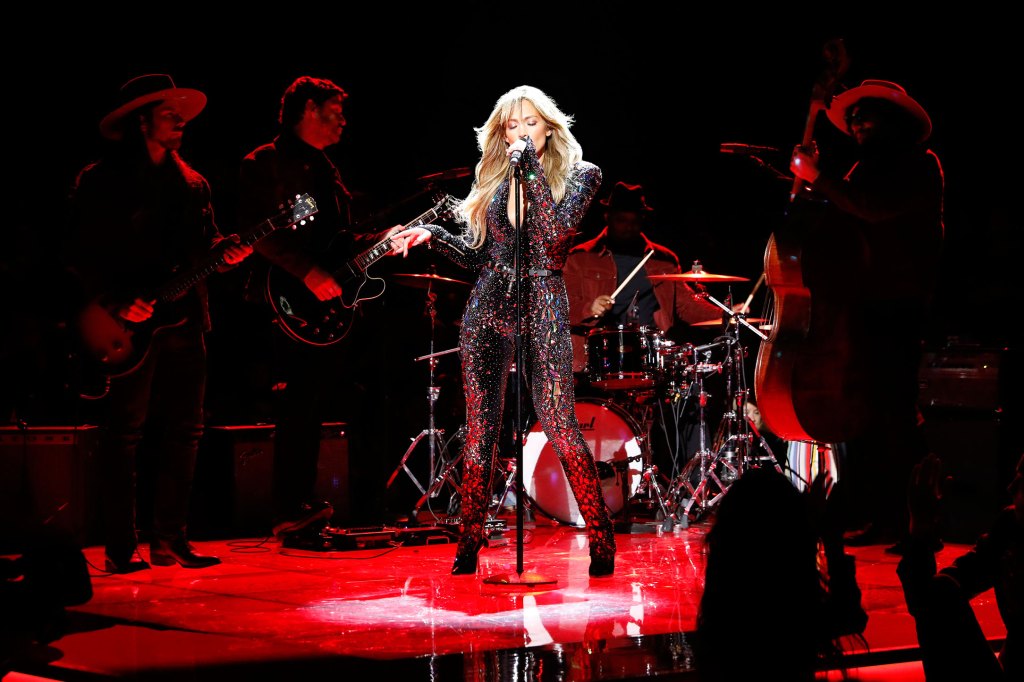 He added a song to the program called “If I Can Dream,” which included quotes from King, and became the special’s emotional finale. On the new tribute special, it’s sung by Carrie Underwood, Mendes, Malone, Rucker and Shelton — with tape from Presley’s original performance. (The 2018 version will included on The Best of the ’68 Comeback Special, a newly released album drawn from Presley’s original broadcast, out Friday.)

Presley’s daughter, Lisa Marie, was born the year of the special, but she remembers watching tape of the show as a toddler. “I remember being told Daddy was doing something really important on television,” says Lisa Marie, who, like her mother Priscilla, makes a brief appearance on the new special. “I remember being nervous for him. It was the comeback, and it was really important to him.”

Other than Binder, the only person on set who worked with Presley was Mac Davis, who wrote the hits “In the Ghetto,” “A Little Less Conversation” and “Don’t Cry Daddy,” before enjoying his own successful performing career. One of the emotional highlights of the new special’s taping is when much of the cast gathers on the stage, and Davis tells stories of his encounters with Presley.

“He was the superstar of all superstars,” says Davis. After “In the Ghetto” became a major comeback hit, Davis went to see Presley perform in Las Vegas, and he remembers women rushing to the stage, “just wanting him to come over and sweat on them.”

Then he had his own special moment. “Before he did ‘In the Ghetto,’ he made some sort of a gesture about it being his first million-seller in years or something like that,” Davis says now. “He just looked over and he winked at me and I was like, ‘Man alive, thrill of my life. He knows me.’”

Standing at the center of the boxing ring stage, Darius Rucker performs a torrid “One Night,” the uncensored version sometimes known as “One Night of Sin.” In the mid-Fifties, Presley recorded two versions of the classic cry of passion — the original with suggestive lyrics and a chaste rewrite that was clean enough to become a pop hit in 1958. Rucker goes with the original.

Several musicians are crowded onto the small stage, including a percussionist in pork-pie hat who beats his drumsticks against a guitar case. Rucker begins singing, quieter at first, then swells with feeling as the song goes on. After it ends, the singer shakes hands with the players. “That’s rock & roll.”

After leading a performance of “Burning Love,” Australian country star Keith Urban is joined onstage by Post Malone for “Baby, What You Want Me to Do.” The hip-hop hitmaker is clad in sparkly cowboy boots and a mustard Western suit, with a colorful American eagle embroidered on the back in red, orange, blue and white.

The two singer-guitarists joyously shout lyrics at each other and take turns playing twangy rock guitar solos. It’s the night’s most rock & roll moment so far. At the end of the song, Malone flicks his pick high over his shoulder.

Urban grew up hearing Elvis on repeat, particularly a medley called “American Trilogy.” The singer’s father loved the track: “My dad would play that thing at earsplitting levels — usually half-tanked and just crank it up.”

There was never a time when Urban didn’t remember Elvis being present in some form. “It’s like he’s always been there, like Coca-Cola,” Urban says with a laugh. “He’s still here. He never left the building.”