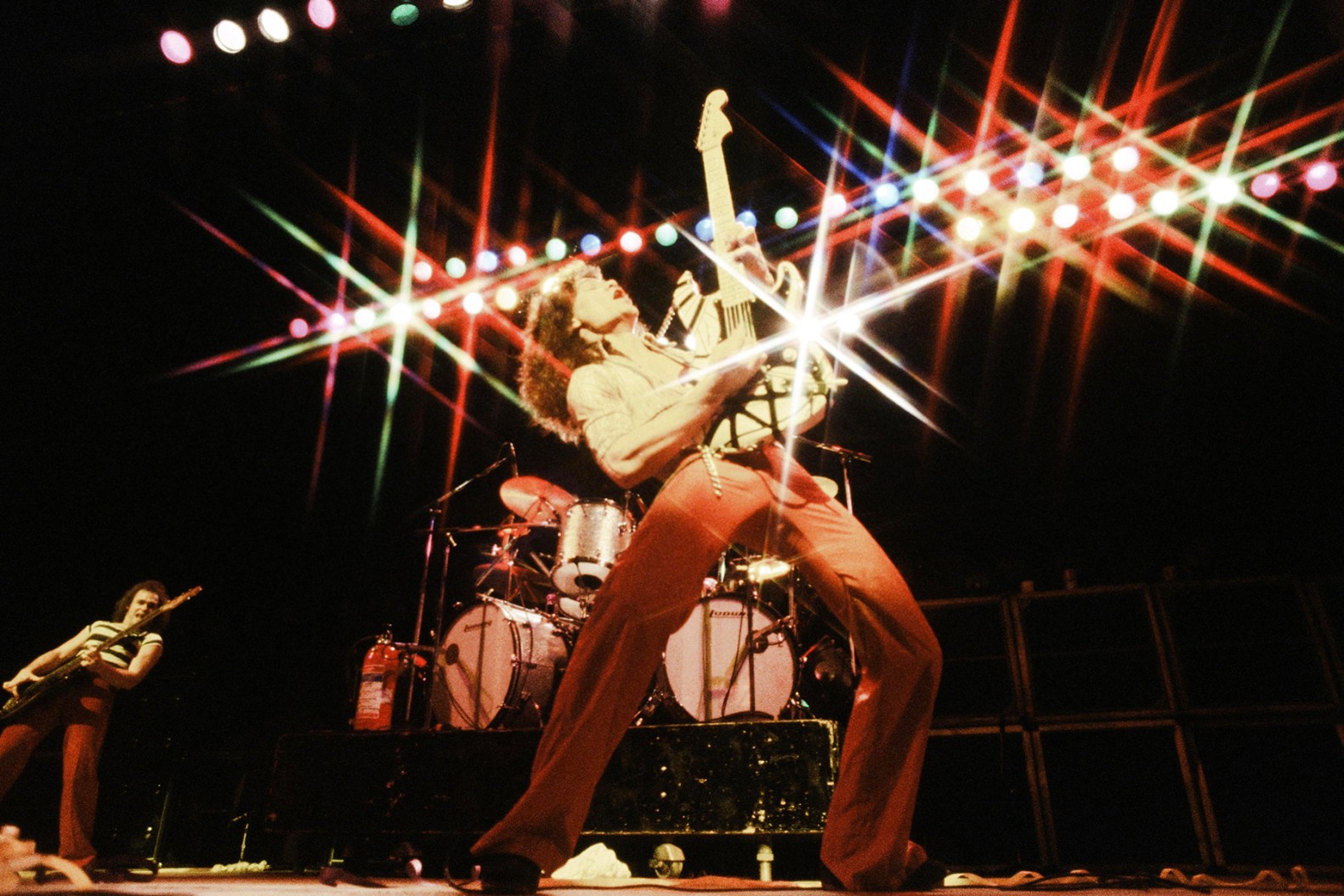 The year before Van Halen put out their self-titled debut, the biggest things in rock were long, ponderous solos and the back-to-basics riffing of the Sex Pistols and Ramones. Then came “Eruption.” In just 102 seconds, Eddie Van Halen redefined the vocabulary of rock guitar — like Jimi Hendrix and his personal hero, Eric Clapton, had done a decade earlier — with an array of fluttering melodies, laser-beam licks, and sea-sickening dive bombs. More than 40 years later, it’s still exhilarating. Even if you didn’t play guitar, you’d have to ask yourself, “How’d he do that?”

Van Halen was a self-taught prodigy. He’d started out on drums but switched to guitar when his brother, Alex, nailed “Wipe Out” on the kit before him. “Eruption” was just him and Alex noodling around during the sessions for Van Halen, prepping for a gig, until producer Ted Templeman insisted they record it. “I do whatever I want,” Eddie said in his first big interview, with Guitar Player, in 1978. “I don’t really think about it too much — and that’s the beauty of being in this band. … Everything is pretty spontaneous.”

That pioneering spirit guided Eddie throughout his life, and across four decades — until his tragic death from cancer on October 6th — he made countless innovations in rock music. Not only did he radicalize the way the instrument was played, he redefined how it could be built and how it could sound. His famous “Frankenstein” guitar was shown at the Metropolitan Museum of Art’s Play It Loud exhibit in 2019, and one of his guitars was previously featured at the Smithsonian — just two examples of his influence on art and culture. Here are his greatest contributions to the vocabulary of rock & roll.

Although classical guitarists had already pioneered using their picking hands to play notes their fretting hand normally would — in order to give musical phrases a wider range — Eddie confounded rock fans with what became known as “finger tapping,” playing the guitar with two hands, kind of like a piano, on “Eruption” and other songs. (Both Ed and Alex took classical piano lessons as youngsters.) The approach was so revolutionary that Alex encouraged him to play gigs with his back to audiences so aspiring ax men wouldn’t steal it before the band had a record deal.

“I was watching Jimmy Page going [sings hammering guitar lick], like that, with one hand, in ‘Heartbreaker,'” Eddie told Rolling Stone in 2008 of why he started playing that way. “I thought, ‘I can play like that, and you wouldn’t know if I was using this finger or this one.’ But you just move it around and it’s like, ‘You’ve got one big hand there, buddy. That’s a hell of a spread.'”

He was guitar’s mad scientist.

A constant tinkerer, Eddie always sought ways to modify his instruments for maximum impact; he’d whip out sandpaper and saws to customize them in ways to make the sounds in his head. His most famous guitar was known as the “Frankenstrat” or “Frankenstein” because of the way he built it himself from a $50 Charvel body and an $80 neck. He had the audacity of affixing it with a humbucking pickup, which creates a fatter sound and is typically found on Gibson electrics, like Les Pauls. “I’ve experimented with it a lot,” he told Guitar Player in ’78. “If you put the pickup really close to the bridge, it sounds trebly; if you put it too far forward, you get a sound that isn’t good for rhythm. I like it towards the back; it gives the sound a little sharper edge and bite.” He put his own frets on it and got rid of all the knobs and switches of popular guitars at the time, using only one volume knob. He then painted it with angular stripes.

He also chainsawed a copy of a Gibson Explorer to make it look more like a Flying V. “Nobody taught me how to do guitar work: I learned by trial and error,” he told Guitar Player. “I have messed up a lot of good guitars that way, but now I know what I’m doing, and I can do whatever I want to get them the way I want them. I hate store-bought, off-the-rack guitars.” Although he wasn’t the first prominent guitarist to meddle with his instrument — David Gilmour had his “Black Strat” and Les Paul had the freakin’ Les Paul, for instance — Eddie inspired the custom-guitar craze of the Eighties.

Moreover, he brought some of his innovations to the guitar world at large. He worked with guitarist Floyd Rose on a whammy bar system that stayed in tune, encouraging Rose to add fine tuners to the bridge. He patented a support device that props up the guitar to make finger tapping easier, as well as a device that makes it easier for guitarists to drop their lowest string a whole step, called the “D Tuna,” and a unique headstock and a stacked humbucking pickup. He also collaborated on a special kind of humbucker for Fender that’s still pending.

His tinkering extended beyond his guitars.

A fan of Cream, whose Eric Clapton had innovated what he called the “woman tone” on songs like “Sunshine for Your Love,” Eddie aimed for what he called the “brown sound.” He achieved it by playing his Frankenstrat through a 1968 Marshall Super Lead amp, an MXR Phase 90 (for added high end on his solos) and an echo unit. Although he used to fib about modding out his amplifiers (leading countless amateurs to wreck their gear by doing the same), the truth was he used a Variac — an electronic device that could change the voltage going into an amp — to make his amp run at a lower voltage and used other electronics to alter the volume of his amplifier. It all added up to a brittle, cutting tone that still had warmth.

At the peak of New Wave, he dared to rock hard with keyboards.

At a time when rock was saturated with Eddie Van Halen ripoffs burning up their fretboards and bands like Blondie and Duran Duran owning the charts with moody, New Wave songs, he made a hard-rocking hit out of a song built on synthesizers. “Jump” has not only a blazing guitar solo, which sounds a bit like a brilliant afterthought, but also a mind-bending keyboard lead. He’d been experimenting with keyboards on songs like “And the Cradle Will Rock … ” and Van Halen’s cover of “Dancing in the Streets” (the closest they got to disco), but “Jump” was its own thing — fun but still tough (and certainly harder-hitting than anything like-minded synth-heads Journey had ever attempted). To boot, he used the synth again on a bass-thumping ballad of sorts, “I’ll Wait,” on the same album, 1984, and got a hit out of that, too. Keys would play a big part of later Van Halen hits in the Sammy Hagar era, including “Dreams,” “Right Now,” and “When It’s Love.”

He came up with compositions as much as solos.

Although “Eruption” was a burst of spontaneity, full of pinch harmonics, slurs, finger tapping, and string rumbles, Van Halen worked harder on later instrumental passages. On Van Halen II’s “Spanish Fly,” he brought his finger tapping and speed-of-light pyrotechnics to the acoustic guitar. On Fair Warning’s “Sunday Afternoon in the Park” he made a Led Zeppified misty-mountain jam with Alex, using a keyboard. Diver Down’s “Cathedral” was a pastiche of volume-adjusted trickery, making his guitar sound like a keyboard — but with a classical flair, and that same album’s “Little Guitars” was a Spanish guitar etude. “316,” off For Unlawful Carnal Knowledge, could have been an acoustic ballad if Sammy Hagar put vocals to it, but it worked beautifully on its own. And Balance’s “Baluchitherium” proved that Ed could shred instrumental jazz-rock as well as, if not better than, guitar idols like Steve Vai and Joe Satriani who had risen in his wake. Moreover, there’s a certain beauty to the way that rockers like “Panama” and “Right Now” slide in and out of intensity. Eddie always made it sound effortless.

In the early-to-mid Seventies, heavy metal and hard rock were defined by the brooding dirges of Black Sabbath, the mysticism of Led Zeppelin, and the hard-driving hyper-masculinity of Deep Purple and Judas Priest. Van Halen made heavy metal you could dance to. Although David Lee Roth deservedly gets a lot of attention for his Vaudevillian swagger (“Have you seen junior’s grades?”), it was Eddie who supplied the soundtrack with elastic riffs that boogied as much as they slammed and a carefree, fluid approach to soloing that felt airy and light — two words that might otherwise seem like anathema in the heavier wings of rock. Hard-rock bands like Ratt and Mötley Crüe tried to copy Van Halen’s party aesthetic but never quite landed on the same formula. Even in the Hagar years, his guitar was an equal, if not more important voice, to the Van Halen experience. It drew you in.