Back in January, Dirty Honey singer Marc Labelle was wearing a vintage-looking Aerosmith T-shirt onstage at Nashville’s Basement East while belting out the classic-rockers’ 1976 hit “Last Child.” It was a bit on the nose, but that’s the unabashed appeal of this L.A.-based band, a Seventies/Eighties rock outfit that isn’t afraid to wear its influences — quite literally — on their sleeve. 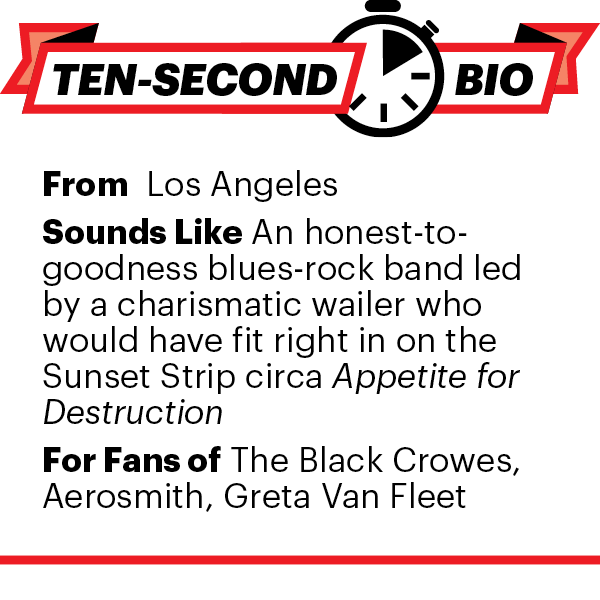 Dirty Honey came together in 2017 when Labelle, a New York native, met guitarist John Notto at the singer’s regular covers gig at a Santa Monica bar. Notto had moved to Los Angeles from Maine on a mission to match the success of his favorite band, Guns N’ Roses. Labelle was struck by his ambition. “He seemed like a true rock & roll personality and somebody I should be pursuing a dream with in an original band,” he says.

Labelle ditched the covers show and, with Notto, bassist Justin Smolian and drummer Corey Coverstone, began writing original material like the moody rocker “Fire Away” and the smoldering ballad “Down the Road.” The quartet settled on the name Dirty Honey — a Sunset Strip-ready moniker that came to Labelle after hearing Robert Plant talk about the Honeydrippers on Howard Stern — and started to fine-tune their live show in the clubs.

“There’s a respect that’s earned there, starting from zero,” Labelle says. “A lot of the problems with [singers] on American Idol or The Voice is they haven’t done the clubs. They may have this booming, unbelievable voice, but they have no presence and no connection to the songs they’re singing.”

Onstage, and on Dirty Honey’s self-titled, self-released debut EP, Labelle evokes the wails of Plant and Steven Tyler, with hints of Chris Cornell, while Notto channels his heroes Brian May and Slash, weaving in some greasy slide. Labelle admits the band made a stab at a more alternative-leaning sound with “Fire Away” before embracing their simple guitar-and-amps setup. “We were trying to push the envelope of rock & roll a little too hard and trying to break what we thought was new ground, rather than doing what came natural to us,” he says.

Following their instincts proved to be a good idea. Their breakneck, bluesy debut single, “When I’m Gone,” went to Number One on Active Rock radio in late September, according to Alpha Data; they’ve opened shows for GN’R and the Who; and they’ve racked up more than 14 million streams to date. Like flies to honey, dirty or otherwise, the band is attracting a fan base that’s been underserved: Many of the shows on their headlining winter tour sold out, and they moved about $8,000 a night at the merch table — impressive for an independent act that plays ballsy, old-school rock & roll, not the most youthful of genres.

“I heard that a million times: ‘Rock & roll doesn’t stream.’ But rock bands sell a lot of fucking tickets and merch,” says Labelle, who doesn’t think a record label has much to offer his grassroots band. “We’ve been on the road with a lot of great artists and spoken to a lot of rock stars I really admire, and none of them have ever told me that they absolutely adore their label.”

Dirty Honey aren’t going it alone. They’re currently doing pre-production for their debut full-length album with producer Nick DiDia, who as Brendan O’Brien’s longtime engineer cut his teeth on LPs by Pearl Jam and Rage Against the Machine. The band flew to DiDia’s studio in Byron Bay, Australia, when they recorded their EP (“It’s really a cost thing,” Labelle says. “Studios in L.A. are really expensive”), but because of the pandemic, they’re collaborating now via Zoom.

Labelle hopes the band’s upcoming album will reignite the rock revival that looked to be catching fire three years ago with groups like Greta Van Fleet and Rival Sons. “I thought there’d be a little more true rock & roll popping up, but it’s still pretty much slim pickings,” he says. “We’re happy to plant our foot in there.”

The Neo-Nazi Hunter Next Door

He’s sure that if you play loud rock chords, the fans will come. Just look around, Labelle says.

“You can go out on the Sunset Strip or walk around Nashville and there are people all over town wearing Rolling Stones, the Who, and Led Zeppelin shirts,” he says. “There is a very visible thirst for rock & roll.”