On January 24th, drummer Butch Trucks of the Allman Brothers Band committed suicide. Four days later, his nephew and Allmans bandmate, guitarist Derek Trucks, spoke to David Fricke from the road for a special tribute, in Derek’s words, in Rolling Stone. That conversation ran long and deep, like a 45-minute “Mountain Jam.” What follows is that extended reminiscence – in Derek’s words to you.

It hit me in St. Louis, the first time I got onstage after finding out Butch had died. Our band has two drummers. I looked back at that position where he was with the Allman Brothers Band. Then we started playing “Statesboro Blues” – it was tough. But it was like checking in with an old friend. Butch was such a major part of that sound, as much as Gregg’s voice. The way he played drums, it’s not here anymore.

My earliest memories are of traveling from Jacksonville, Florida, to visit my uncle and his family in Tallahassee. It was a massive departure from the life we were leading – this lower-middle-class background. My dad was a roofer; my mom worked in elementary school. Butch’s house had these gold records and a drum set. And any time you saw Butch – when he walked in a room, when he would play – it was loud and in your face. He left an impression at all times.

His directness and brutal honesty is what allowed the Allman Brothers to maintain that integrity for so long. He was a Duane Allman purist. What it was about then, when Duane was leading the band – that’s what it should be about now, every time you hit the stage. Warren [Haynes] compared Butch to a soldier. I think that’s his connection to his dad, who is still around, a World War II vet who marched under Patton: “Get it done.” There’s never any give.

When the Allmans reformed in 1989, it was a resurrection of something I thought was in the past. That was the first music that was important to me – listening to At Fillmore East with my dad and seeing the way it affected him. I remember him telling me stories about going AWOL from military college in Barnesville, Georgia, to go to the Fillmore shows, because Butch pulled up: “Let’s go, hop in.” Those were the stories you wish you had been around for. So when the band re-formed, it was pretty damn exciting.

It wasn’t until I started playing music that I started seeing Butch a lot. I was nine or 10, playing in south Florida at this little dive bar, Tropics International. The Allmans were making that reunion record [1990’s Seven Turns]. Butch brought Gregg, Warren and [bassist] Allen Woody out. That was the first time I played with Butch. I’m almost certain we played “Statesboro Blues.” That was one of the first holy-shit moments for me as a musician. That sound went all the way back for me.

Butch was a rock drummer, but the melody was always there. He was always thinking of the rise and fall, the dynamic range. He was the heart in the engine, and Jaimoe was the mystery and color. Butch was holding down the fort while Jaimoe was doing the exploring. And when they got onstage, they never had to talk about it. I don’t think I ever witnessed them, in the years I was there, talk about what each other was going to play. It was a relationship that worked, and they didn’t have to speak about it. It was just show up: “Oh, cool, it’s my friend and brother. Let’s do it.” It always felt that way.

For me, playing with Butch, in front of that rhythm section, it makes you more forceful and confident. You start realizing the possibilities and how far you can take the music. I’d heard enough at that point. I’d been around the band and even played with Butch in [his band] Frogwings. But playing with Butch in the Allman Brothers, there were gears I didn’t know existed. You realize that there are new parameters – we can take this shit pretty deep. 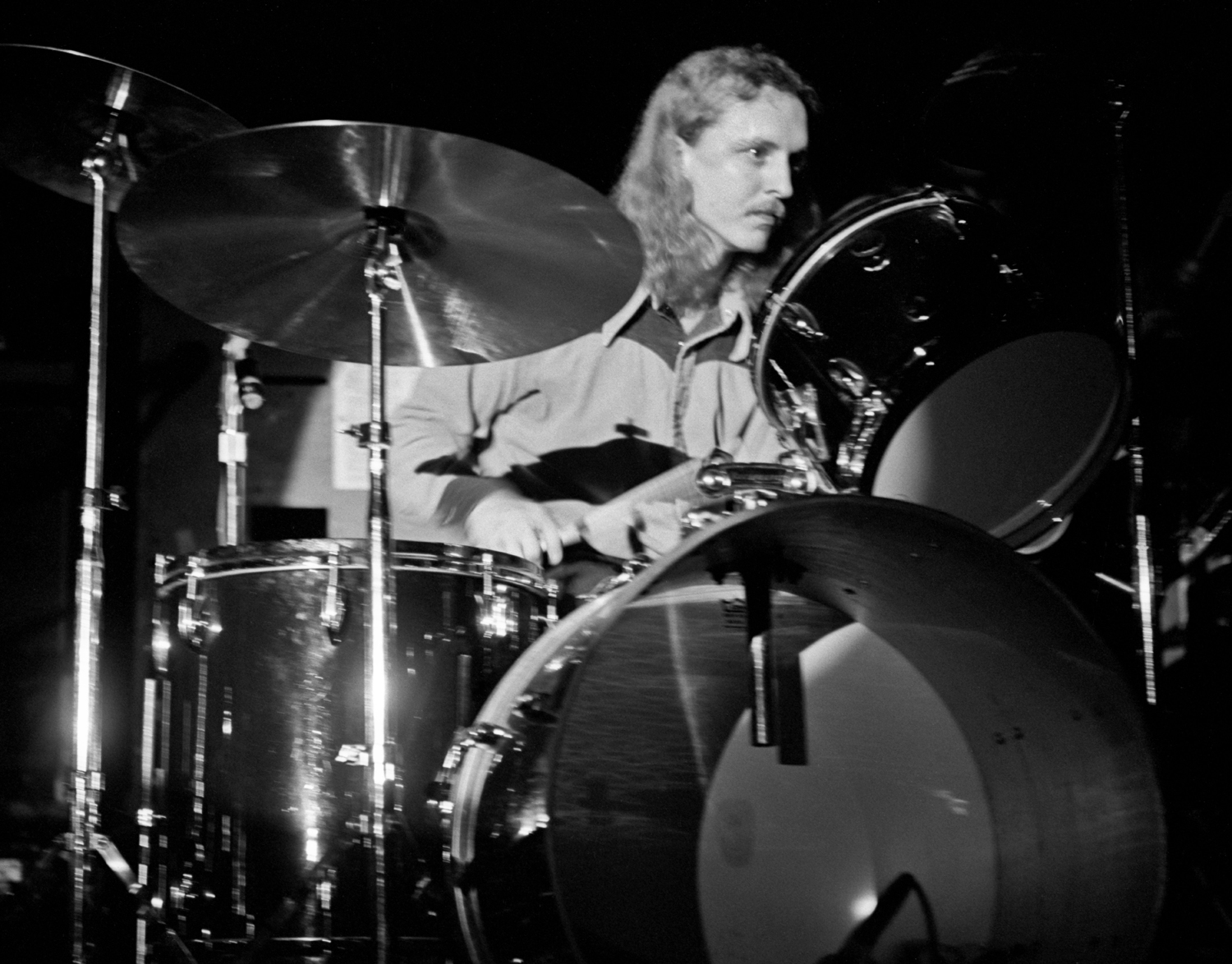 The groove in “Whipping Post” and the shuffle in “Statesboro Blues” are quintessential Butch. As a kid, with any drummers that made the connection with my name, they’d be like, “Man, nobody shuffles like Butch Trucks.” “In Memory of Elizabeth Reed” is another one. When the drummers play that drum fill into the groove, you’re immediately in that place, with just three notes.

The dynamics in the group changed so much in the 15 years that I was there. When I joined in 1999, Dickey [Betts] was the in-charge leader. Everybody deferred to him, whether they wanted to or not. Then after a year or so, Dickey was out. Butch had a lot of faith in me before I realized it – one, to throw me on the gig at all; then after Dickey was gone, “We got this.” But the way he played is the way he lived: “Fuck it, we just charge.”

He would switch from being a bandmate to an uncle from time to time, especially in the Dickey period and then when the band was trying to figure out what it was. His idea of advice was, more than anything, advice that Duane would dole out. That was Butch’s M.O. with everybody. He was always spreading the gospel of Duane. The first handful of years and the magic that created the whole thing – Butch was constantly trying to keep that alive.

Duane was obviously a messiah figure for those guys. And when he died [in 1971], it left such a massive hole. They kept the idealist part of the music alive the whole way. But that’s part of the beauty and tragedy of that band. The spirit and joy of the music was able to survive. But I don’t think everything else grew at the same rate. It’s a strange thing. I think about it a lot. Duane’s presence was so massive for Butch. It wasn’t some unspoken thing. He would bring it up.

A lot of Butch’s influence on me was just the mindset he had, that Duane instilled in him, which was, “Don’t fucking get onstage and give less than what you’ve got. And that might not be enough either.” Butch would tell me about Duane turning around to him on stage and saying, “If you give me anything less than a hundred percent, I will come back there and beat your ass.” That’s always been my M.O. with any band where I’ve been leading the charge.

“The way he played is the way he lived: ‘Fuck it, we just charge.'”

Butch was like an athlete in the sense that, as time went on, he would have to work harder to keep it up. Before the Allmans did a big run at the Beacon [in New York], he’d hire a trainer for a few weeks to get up to gig speed. And you could see it took a toll. He would be more worn down as the run would go. But he rarely felt that onstage. I can count on one hand the number of times I felt that physical thing come into play. And when it did, he would be pissed. You didn’t want to be around him for a minute, because he knew it and it’s not the way he operated. Often, he’d just rest up and come back loaded for bear. I’d get worn out just watching him.

He was certainly having second thoughts after we decided to end the band [in 2014]. In theory, he was ready when we brought it up, three or four years before. But once that date started creeping up, I’m sure a lot of things hit home. If your whole being is wrapped up in this thing, how do you not do that anymore? It’s hard to start a new band from scratch, get back in the van and clubs, after seeing what he has seen and knowing what he knows, having the ability to just musically spit fire: “Why am I at this place?”

Our relationship since the split of the band – it didn’t get closer. I needed to find some fresh air. But I would read interviews with him. He was as rambunctious as ever, his full Butch-blazing self right to the end. I read an article yesterday that was apparently the last interview he gave. I read it thinking maybe there was some insight into why it happened, what happened. He was talking about the band he was playing with. There was a lot of looking forward. It didn’t seem like a note.

His lasting legacy is how uncompromising he was – that sense that we can make the best music that’s ever been played, by anyone, tonight. It’s what we’re missing in the world today – people who just show up and deliver every time. That’s what he got from his dad, who’s 98 and still kickin’, a total badass. You have to walk all the way across France on foot? So start walkin’. And that’s the way he played. There was no give in or give up ever.

It’s a miraculous thing that the Allman Brothers had, and Butch was as big a part of it as anybody. I’ll never hear another shuffle and not think about his crazy ass.