Deadmau5 on Why EDM Is Over, Learning to Love His New Album - Rolling Stone
×
×

Skyping from his home studio in the countryside near Toronto, where he recently moved from the city, Deadmau5 is taking a break from sorting fan mail. There’s an entire truckload because the post office lost six months’ worth of mail during the move. “I thought people didn’t give a shit anymore,” the electronic-music producer says with a laugh, taking a drag from his cigarette. His girlfriend brings him a cup of coffee with freshly made chicken fingers, and Joel Zimmerman, the flannel-wearing 35-year-old behind the mouse helmet, seems perfectly content in the role of a domesticated homeowner.

Last week, the six-time Grammy nominee released his sixth studio album W:/2016ALBUM/, his first as an independent artist via his own label, Mau5trap, which launched in 2007. Best known for giant dance music hits like “Ghosts ‘n’ Stuff,” “Strobe” and “I Remember,” Deadmau5 has tried his hand at everything from progressive house to warm atmospherics to the minimal end of the electronic spectrum.

W:/2016ALBUM/, “which is more of a compilation,” he says, sees Deadmau5 tackling all of these styles. But he hasn’t been thrilled with the end result. Last month, he voiced his concerns on Twitter – “I don’t even like it,” he wrote – explaining that the album was “rushed” and “slapped together.” He spoke to Rolling Stone about his changing perceptions of the LP, life in the country, anxiety, his mouse helmet and the downfall of EDM.

You wrote on Twitter that you didn’t like the album. What happened?
I’m not supposed to talk about that. Orders from above.

So what do you think about it now?
Having listened to it again, I’m now getting comfortable with it. There are some great songs – like, I really like “Snowcone” and “Whelk Then” and “No Problem.” I think I’m dissatisfied that it’s not written from start to finish; it’s over a year’s worth of work that doesn’t correlate. It’s not The fucking Wall! I wanted the blowout, and I’m disappointed that I didn’t do that.

Do you have these back-and-forth feelings about your work a lot?
I have back-and-forth feelings about everything a lot – it’s not limited to my albums. Like, you name it: the waxing and waning of the Caribou population in fucking Alaska … oh, they’re fine; oh, they’re endangered. I’m just really too critical of my own shit. But if you were always happy you’d suck. You wouldn’t force yourself into doing things differently. 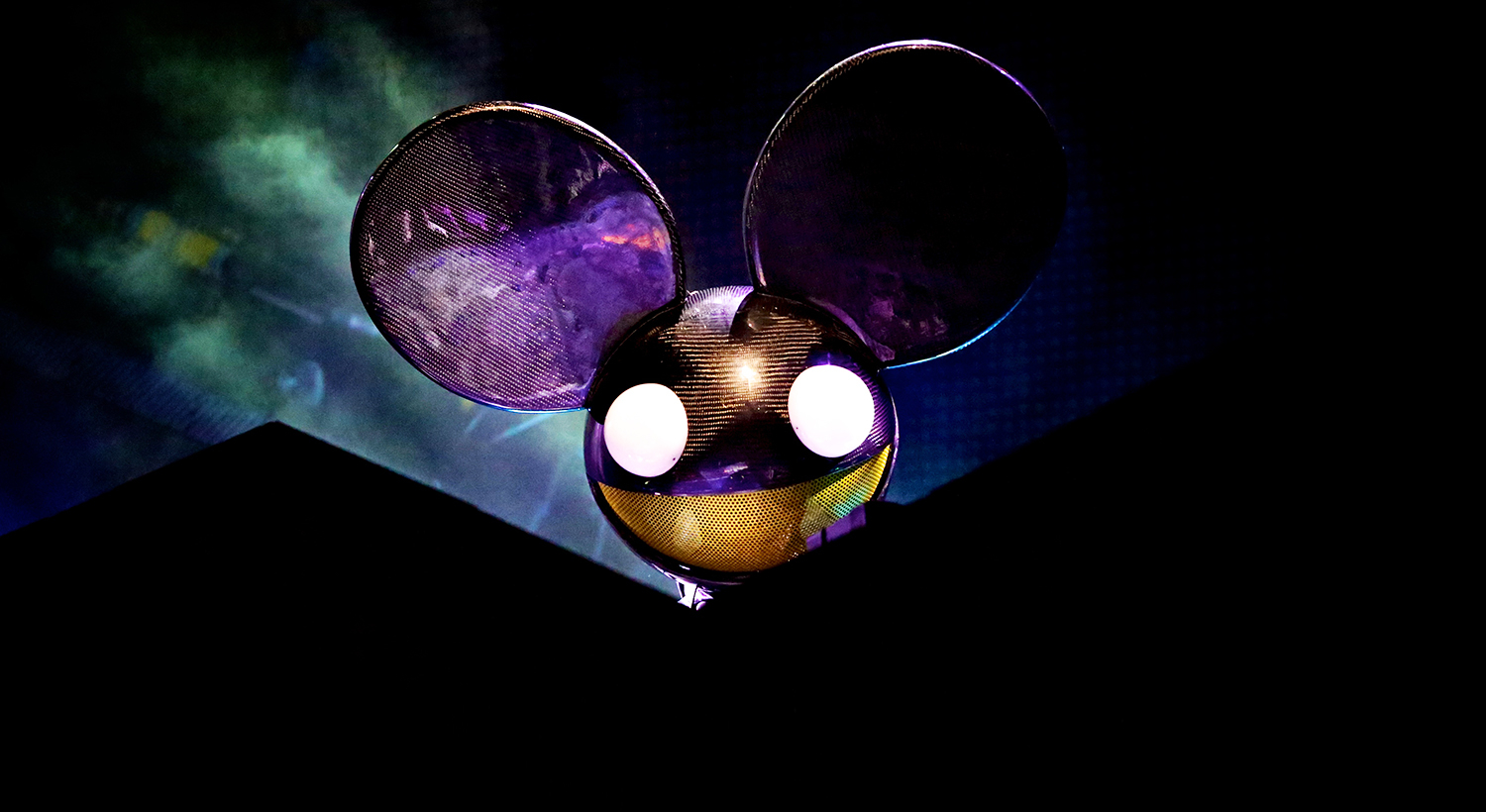 You mentioned liking “Whelk Then.” What appeals to you about that track in particular?
I like that fucking track! The only thing I don’t like about it is the low-end frequency. There’s a kick drum in there, believe it or not. If you listen to it on headphones, you hear an absence of a kick drum because it’s so 40-to-60 hertz, which is really hard to replicate on something that’s not a large PA or huge monitoring system. If you’ve got a little subwoofer, you’ll probably hear it, but if you listen to it on a small device it’s not even there. Sonically, it’s cool in that way.

I really like the grittiness of early Amon Tobin – I’m a huge fan of his old music and I tried to borrow from it, not emulate it. I don’t love my own original work. … Like, I don’t sit there jerking off to “I Remember” every night. But I jerk off to “Sordid” by Amon Tobin.

Who else do you listen to?
That’s none of the world’s fucking business.

You recently moved out to the country from Toronto. Is it important to have a place like this where you can slow down and center yourself?
I feel like I’m better off. The country is dead – nothing, just cut off from everything. The nearest Tim Horton’s is a 20 minute drive. But I’m set, I’m good. I’m almost wifed up. There’s only 300 people living here, so you have to drive [to your neighbors]. It’s kind of freaky – you can totally get lost in the woods. They didn’t have internet, so I had to build my own ISP and 130-foot-tall radio tower. I’m the only guy with a gigabyte of internet connection.

Do you ever get anxiety from isolation?
It’s not that I feel alone, it’s the opposite. I get anxiety from a noise or some scuffling at the side of the stage. I hear stories all the time, from as minor as Dillon Francis getting smacked in the head with a flying beer can to Dimebag Darrell [getting shot onstage]. All that shit freaks me the fuck out, and one of the huge fucking things – and I hope a few assholes who gave me shit for this end up reading this article – when I perform, whether it’s a live show or DJ show, we employ a very strict nobody-on-fucking-stage rule. Automatically, that’s dismissed – photographers get all pissed off, and if we move a video camera, they think I’m a goddamn princess.

If I see anyone or anything in my peripheral or hear some kind of movement or a crew guy, or just some group of fans … I shut the fuck down because I’m thinking this guy has a fucking knife. I’m not thinking about what I’m doing, I’m thinking about what they’re doing and I consume that and project so hard that I freeze up. One occurrence to the point where I blacked out was at the 9:30 Club in Washington, D.C. Some shit was going down, some people were moving around, and a fight broke out. I was already on no sleep – I wasn’t exhausted, but I was, you know … 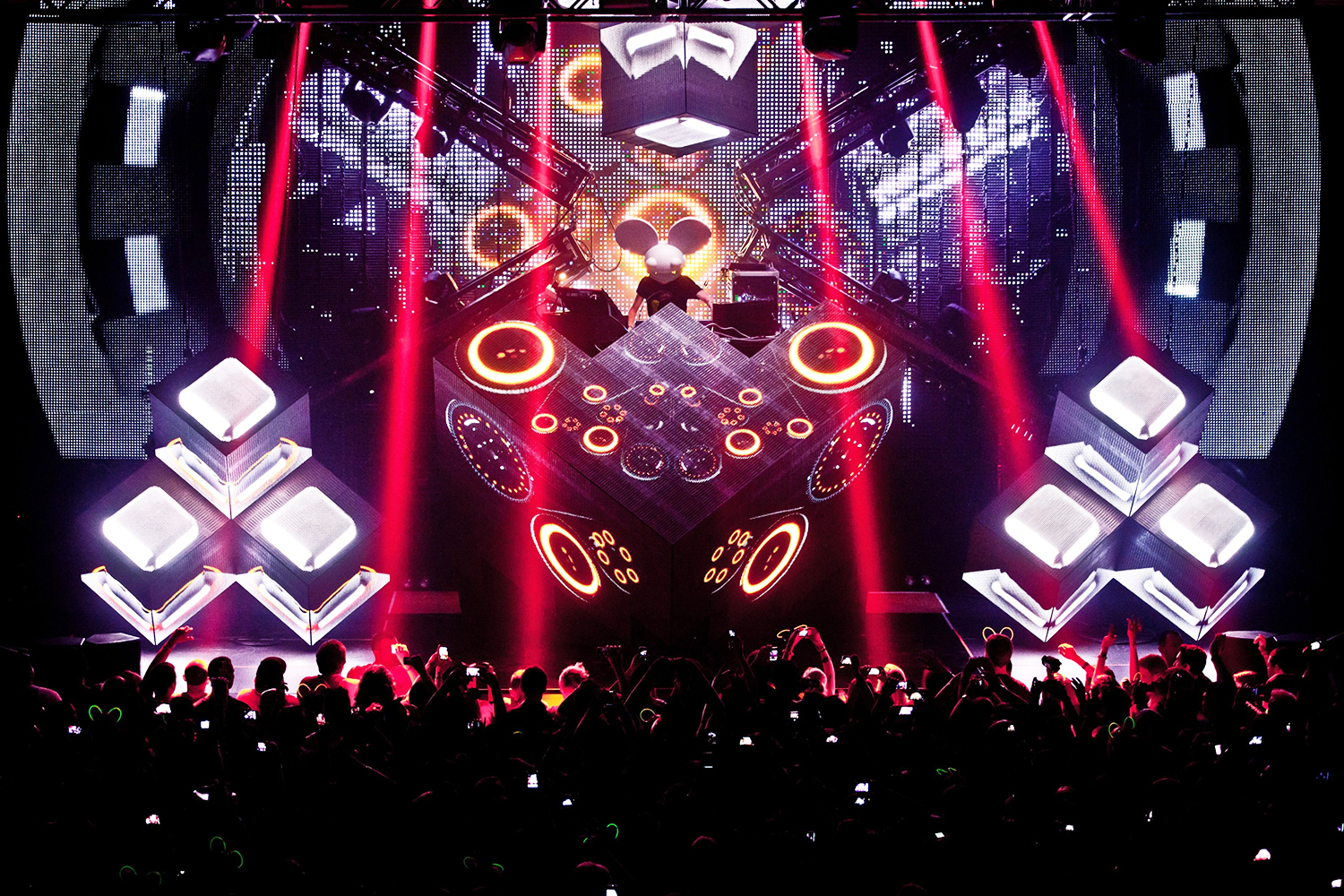 You’re hyper vigilant when you don’t sleep.
Exactly, you trip a little harder. Your breathing is so tight that your brain doesn’t get oxygen and it’s like, “Goodnight, dude!” So you pass out from that lack of oxygen, and everyone says it’s exhaustion. You fell, dude – get over it.

Can you see out of the sides of the mouse head?
No, and that’s what fucks me up, too, because I can only hear. One time I thought I killed a kid. I perform on a platform that’s six-feet up, so you have to go up the back into the cube setup. I have rules with my tour manager: if you’re going to do something, knock on the floor so I know it’s you coming up because I can feel the vibrations. So I hear something in my IEM that was all broken up, and it sounded really urgent: Some kid broke onto the stage and started running out the back. He just [wanted to get up there], but I don’t know that because I’m wearing a mouse head, and I can’t see shit. Even worse, I’m looking out of a camera down here [motions to his chest] and I’ve already got a complex.

I hear someone directly behind me and I did a backwards kick, and this kid went flying off the ladder and boom, right on his back. I turned around, and I took the helmet off and I saw this kid just fucking laying there. I thought I was done, that I broke this kid’s neck. Even if I sprained his neck, I’m done. That motherfucker sprung up like a three-year-old and ran off the side of the stage. I’d never felt so freaked out in my life. I wanted to go kick his ass again just for that.

What do you think of artists like Marshmello who are using a similar [helmet] concept?
Wait, did you say artists like Marshmello? You mean people like Marshmello? Let’s fucking clear the air on this one. I don’t care if you’re wearing a fucking helmet, I don’t give a shit – with that logic, I ripped off Daft Punk. The thing that pissed me off after awhile was the constant dick riding [on Twitter]. “You trolled me, I trolled you” – whatever. Don’t pass it off as a marketing technique. According to social media, all I do is sit around and burn pictures of this guy.

You said in 2014 that EDM was going to fuck itself –
It already did in 2015. Where have you been? 85 percent crossed over. It’s fucked. It’s out of the innovators’ hands; it’s not really grassroots anymore. I’m partially responsible – I’ve done my part to commercialize shit. Oversaturation.

Do you think it’ll come back around or do you think it’s run its course?
Shit can go, and nothing really ever comes back. Disco evolved into Chicago warehouse, then there was techno; eventually it evolved into EDM. I’m hard-pressed to think about a genre [that’s as popular as it always was]. Nothing goes full-circle with music.