David Byrne is busy preparing for one of his most ambitious undertakings ever — a Broadway show in which he’ll perform songs from his entire career. But today he ended rehearsals early to ride his bicycle into Brooklyn and catch Tierra Whack at the Afropunk fest. The former Talking Head had suggested a conversation with Whack, who, at 24, has already established herself as one of hip-hop’s most innovative new voices. Her debut, Whack World, collects 15 tracks, each just one minute long, hopscotching between moods and showing off Whack’s complex and daring rhymes. In an accompanying mini-film, Whack (yes, her real name) plays a different character for each song, making it clear that, like Byrne, she has a nose for theatrics. After sending the Afropunk crowd into a frenzy, Whack hops offstage and meets one of her biggest fans.

BYRNE I was on the road all last year, and when Whack World came out, it was playing all over the tour bus. I thought, “This is amazing.” But more than that, it’s turning the industry upside down: the whole concept, the minute-long songs, the way they’re strung together, and how they went one into the next. You listen and go, “Oh, OK. Here’s the future.” If people aren’t familiar with your music or that music video, I like to go, “I want to show you something,” and then watch their reaction. And they go, “Oh, my God. Where is this going now?”

WHACK Wow. Thank you so much. Our moods change throughout the day. [On the album] I was sad for two seconds and I got happy again. Then I was mad. I wanted people to feel that. I just wanted them to know I’m human.

BYRNE It’s a revolution in the music industry: Somebody who goes, “I don’t have to do anything the way it’s supposed to be done. I can do it this way, and it works.”

WHACK When I first started, people were telling me, “Oh, you can only have one sound — you can only do one thing. Either you’re a singer or you’re a rapper.” That drove me crazy, because I would go in the studio every day and just make new things. I felt I had so much to offer. It’s like when they don’t hire you because you’re overqualified: “Give me the damn job — I need it!” You also said you came to one of my shows.

BYRNE Yeah, there was a show at the Rainbow Room [in New York], some months ago. I was already a fan. I was like, “Oh, I got to see it when she goes live.” You had a dress with an image of a dress on the back and a hood with a face on it. It was so funny. When you turned around, it looked like a weird cartoon character. It was so great. More people today knew the songs. People were singing along today. The music’s getting out there.

WHACK Isn’t that crazy? If you get people singing your words, it’s really good.

BYRNE Were there songs that you came up with the visual idea first, before you wrote the music?

WHACK I do the music first. My producer and I make the music together, and then I kick him out and record myself. I recorded about 40 to 50 songs, all one-minute songs. With Instagram and all the platforms, we hoped it would be a good idea. It’s like a taste test. My manager was like, “Wow, you’re not making anything alike. Nothing sounds the same.”

One thing you two have in common is you both transform into other characters onstage.

BYRNE Not so much now, but years ago when I started, I was very shy offstage. And when I got onstage, I felt this was my opportunity to let people know what I’m about. And as soon as it’s over, it’s like, “Can I go back to my room?”

WHACK I started off really shy too. Even now, before I go on, my anxieties are bad. Then I get onstage and turn into a different person. I get off, I’m just, “Oh, my God, what did I just do?” It’s a roller coaster.

David, you were here in New York when hip-hop arrived, and Tierra, you were born in 1995 and were raised with the music. What are your first memories of hip-hop?

BYRNE The earliest things were a lot of break dancers and artists. At that point there was a mixture between punk rock, whatever art scene there was, and the hip-hop scene from the Bronx that was coming in, and they were all starting to mix together. That was really nice. 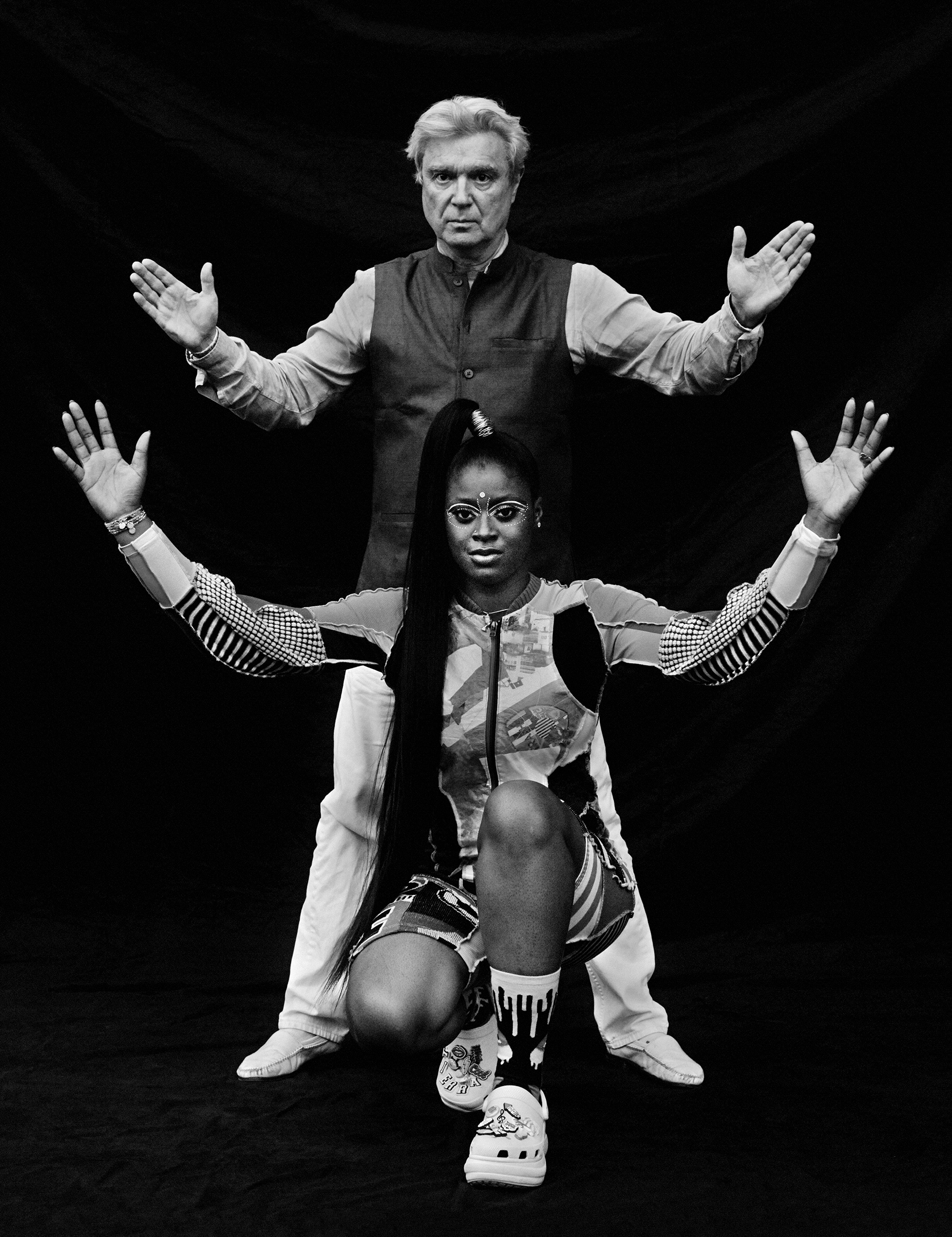 WHACK In Philly, dudes would be on a corner or at a party just rapping. I had to learn how to freestyle. I knew all the classic beats, and I’d do my own rhymes over them. But I did so much research on everybody that came before me. You can’t just jump in. My mom always bought me a lot of cassette tapes, CDs, and music documentaries. I liked the big old earrings, the Adidas with the fat laces like Run-DMC. I’m going to get some gold grill soon. I started with poetry, so to me, Lauryn Hill sounded like a poet. I’m like, “OK, I need to follow her lead.” And luckily, the whole cover of that album is like a desk, like I’m going to school.

BYRNE With a lot of DJs in hip-hop, I thought, “This is like how jazz started.” They were playing these songs that were three minutes long, and the dancers didn’t want to stop. They had to find a way to stretch the song. The dancers were, in a way, telling the DJs, “Keep it coming.”

WHACK The whole rapper/DJ thing, I love that. It’s so classic to me. I don’t know how to dance, so I couldn’t have dancers and stuff. All I have is me and my DJ. And we just rock it out.

BYRNE I want to ask a little bit about your visual background, if you had done theater or video things before.

WHACK I was a vocal major in high school, but I didn’t see myself as an actress or anything. I just didn’t find myself to be theatrical.

BYRNE That is amazing, because people would think you had training.

WHACK Oh, that’s a huge compliment. I’m still trying to find my voice. I’m not just listening to rap or hip-hop or R&B. I’ve got some pop, jazz. Now, when I’m watching movies, I’m imagining making a song for movies. I want to be all over, across the board.

What music have you each been listening to lately?

BYRNE Yeah, I know him.

WHACK I just love his voice. He just has this dry [tone]. I just listen to it all day. He just has a special way: his sound, his voice, everything. I’m a sponge, and I’m trying to figure out how do I get that vibe.

BYRNE The other day I watched a documentary about this flamenco singer, Camarón de la Isla, who died in the Nineties. He was this incredible flamenco singer from a little town in the south of Spain. He decided to bring a drummer and other stuff into flamenco, and they hated it.

WHACK Oh, wow. But it worked.

David, if Tierra were to ask you how to sustain a career in music, what advice would you give her?

BYRNE I think you already got it. Keep exploring, keep changing, keep doing what you feel is right. I hit some parts where things went down, where I lost it. Maybe what I was doing was not good. There were definitely periods where I lost the audience. It comes back. It’s hills and valleys, and it comes back again.

David, you’re about to experience a first in your career: a Broadway production featuring your own music.

BYRNE Yeah, my touring show is coming to Broadway. Part of the challenge is doing that every night, almost. The other challenge is, honestly, the Broadway audience is really different than the concert audience, who are up and moving. I don’t think that’s going to happen in a Broadway theater. I’ve got to be prepared for that.

WHACK I got to go. I got to come see it.

BYRNE I hope so!