Few artists are more sensitive to the pain and absurdity of modern life than Australian singer-songwriter Courtney Barnett and Broad City‘s Abbi Jacobson. These days, both are turning that laser focus on themselves.

On previous releases, Barnett has often masked introspection behind dazzling wordplay and humor. But her latest album, Tell Me How You Really Feel, lets it all hang out. Songs like “Crippling Self Doubt And A General Lack of Self Confidence” dissect a prickly relationship. Elsewhere, Barnett tackles feelings of helplessness (“Sunday Roast”) and confronts male aggression (“Nameless, Faceless”). By exposing her insecurities, she finds a sweet spot somewhere in between vulnerability and toughness.

Also en route from comedy towards candor: Abbi Jacobson. Though she’s always drawn from experience while writing Broad City, her personal life remained buried in the hijinks of her character, Abbi Abrams. Now, as the series winds down (the fifth and final season will air next year), Jacobson is preparing to release a collection of autobiographical essays, titled I Might Regret This. The product of a three-week, cross-country drive she embarked on after a breakup, it’s her first attempt at truly confessional work.

Barnett and Jacobson recently chatted over coffee in Los Angeles about impostor syndrome, how art changes once it’s released into the world, and the relief that comes after sharing their secrets.

Abbi Jacobson: Something I’m struggling with right now is work-life balance. You seem like someone who’s constantly working, but in a good way. Is it something where you have an impulse, even when you’re home, like, “Oh, I’ve always wanted to collaborate with Kurt [Vile],” and then all of a sudden you’re on tour?

Courtney Barnett: The balance thing, I’ve gotten better at over time. A lot of it was from trying to keep my relationship [with Australian singer Jen Cloher, her partner of seven years] together. I’m not a major workaholic, but the idea of time off just doesn’t appeal. If I get time off, I’ll be like, “Maybe I should write something…”

Jacobson: I know! I felt this way about you, like, “I think she’s like me.” The amount of stuff you churn out, and you being a visual artist, it has to be a constant thing, even when you’re on downtime. I love those shirts you sent me that have your drawings on them – have you always drawn?

Barnett: Yeah, since school. When I go back to my mom and dad’s place, there’s this framed painting – it’s like the shittiest painting ever, but I love it. Just a circle, the head, and the legs. I did photography and drawing at university, but I feel l reached a certain skill level and then never excelled.

Jacobson: I went to art school too, and I always thought, like, “Oh I have to be this representational artist,” but there’s other ways to be an artist. You just have to find a platform for it, even if it’s not the traditional trajectory.

Barnett: I was listening to your art podcast, and there was this bit where you were talking about slipping postcards into the gift shop, and I really connected to that, because I used to do that with CDs, I used to slip them into stores.

Jacobson: It’s such a mixtape thing! You would put them in CD stores?

Barnett: Yeah, and in the library. You imagine someone picking it up, and you get discovered.

Jacobson: It’s a point in your life when you’re like, “There is no other way.” It’s the opposite of stealing, ’cause you’re giving it away for free!

Barnett: It’s also this weird balance I used to have between thinking really negative things, like, “nothing will ever work out for me,” and this huge burst of ego, like, “I’m great and everyone needs to hear about it,” and the see-saw between the two.

Jacobson: I feel this too, this switch from, “Hustle, hustle, hustle, because nobody will ever know my comedy,” and then all of a sudden, “Oh, people do, and they are liking it.” And then it’s this mix of feeling, like, “OK, I think I know what I’m doing now,” but also pressure.

Barnett: Do you still secretly feel like you don’t know what you’re doing?

Jacobson: Constantly doubting myself! Like someone’s gonna call me out.

Jacobson: Exactly! And I have this weird relationship with social media because that’s kind of the only connection to the public, so I’m constantly wondering how much [I’m] letting what other people think impact me, or is it me judging my own work, and I don’t know.

Barnett: I like to think that it’s me judging my own work, but a lot of it is other people.

Jacobson: Something I’m curious about – I can write about other people, and I can write characters, but I think I’m most successful writing something that’s stemming from me, whether it’s literally a character named Abbi or a version of me that I’m putting in someone else. Your music is so vulnerable, it seems like you’re being so honest. Do you get that similar thing where you’re like, “Oh I can write detached,” or is it always extremely personal?

Barnett: You can only be as honest as you can be with yourself. Even when I’m trying to be completely open, that defense still comes up, and I’m like, “Don’t let that out or you’ll be hurt.” I feel like I’ve been as honest as I can, and this album feels a lot more vulnerable and less trying to cover things up with a bit of funny.

Jacobson: I feel that way about this album – I might know your older albums better at this point, but it feels more raw. [laughs] Should I be a music journalist?

Barnett: Me and Kurt [Vile] kept saying “organic” on the tour, we can’t help it. And it’s like, that’s disgusting. [laughs] 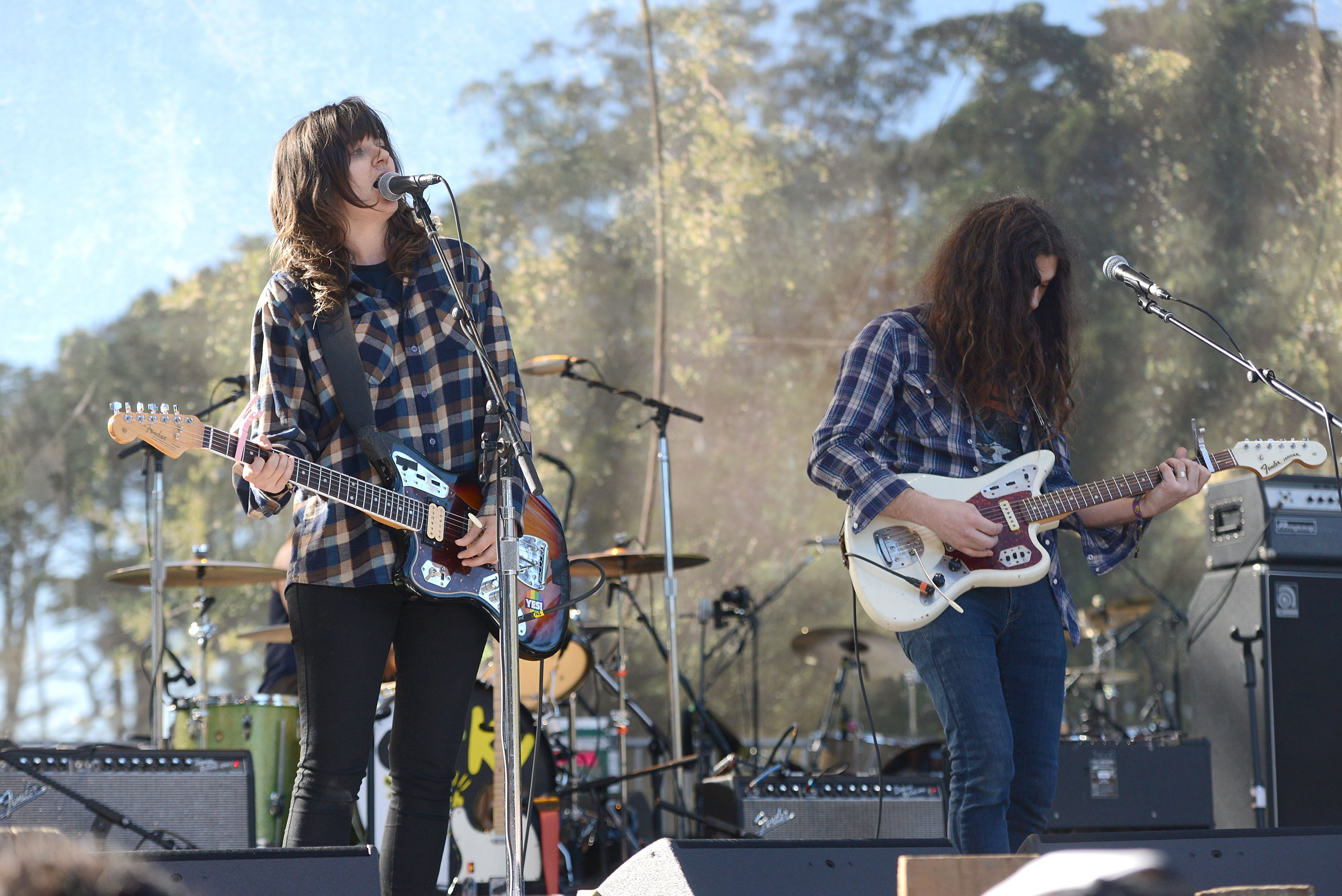 Jacobson: So, when you put something out, even though you’ve listened to it so much – similar to a show, I’ve watched it so many times – do you have that fear of what people will think?

Barnett: It feels kind of liberating instead. I started this whole process being so fearful, and it’s like, fearful of what? There are so many more frightening things in the world, what am I so scared of? But I know what you mean, once it becomes not just yours, it’s through the lens of everyone who hears it or sees it, and it doesn’t just mean your own little thing anymore. That’s been a revelation for me the last couple of years. People come up to you with stories, and they project their own versions of things, and I think that’s incredible.

Jacobson: My favorite teacher in college said this thing that stuck with me: The art is not the piece on the wall, it’s the space between the viewer and the piece. However anyone interprets the painting or your music or my show, that’s true. Which is bananas to think about, because my intention is still true, but they way they took it is also a truth about the thing.

Barnett: It’s a lot to take in. [laughs] Gillian Welch played the other night, and someone was saying that one particular song she sings, whenever someone asks her what the song’s about, she just says, “Yes, that’s what it is.”

Jacobson: Yeah! You’re being so personal, but ultimately it doesn’t matter, because it’s going to be whatever [the audience’s] thing is.

Barnett: That’s the beauty of all art. [both laugh]

Jacobson: So the last show I saw you with Kurt, you sang a cover, and it was not your usual style. You were singing in this incredible way — it was not as rock, and I felt like you had chosen the song because we were in this cathedral space. Have you been singing like that more?

Barnett: It was a Gillian Welch song! “Elvis Presley Blues.” I think my singing journey [laughs] has been a big one. I used to be so nervous to sing in front of anyone, and I think that’s why I found this comfortable middle-range singing-speaking thing. That was a bit of, “Well, if I don’t try too hard, then I won’t get hurt from the process of people saying I’m shit.” It’s real deep psychology.

Jacobson: I love talking about this shit, I’m on this vulnerability kick right now, writing a book of personal essays. I fucking wish I could sing. Performing in that way seems like it would be scary.

Barnett: Yeah, there’s nothing to hide behind. Normally, I create so many layers of distraction, like, “Hey look at this crazy guitar sound.”

Barnett: Yeah, I found a comfortable place. My whole life, being terrified of singing but doing it in a hidden way, then gaining confidence and practice, singing harmonies in Jen’s band, singing high, pretty things to make the song… those layers just make me feel more comfortable with it. So have you finished your essays yet?

Jacobson: Yeah. This is the scariest thing I’ve ever done. I feel like there’s a comparison to that song you sang, where it’s just you singing. When I’m writing about a personal thing on Broad City I’m hiding behind a character — like it’s me, but it’s a version of me; I think I’m different in real life. But these essays are so… someone is just gonna read the words I’ve written, and that’s terrifying. It’s vulnerable in a way I have never been.

When I was trying to come up with a title, I was talking to my friend Paul Downs — he’s on Broad City, he plays Trey — and I was like, “I don’t know what the fuck to call this book.” He asked how I felt about it and I was like, “It’s the most idiotic thing I’ve ever done, I don’t know why I’m doing it, but it’s something that I can’t not write.” And he was like, “Call it ‘I Might Regret This,’ ” and I said, “Yeah, that’s it.” [laughs] I drove out here last summer by myself for three weeks, and that’s the book. Every essay is a city, but it’s not necessarily totally about the city; I was a mess when I drove here so it’s like this mess of a time. I’m not quite a mess anymore. I’m revising my mess.

Barnett: Now I can’t wait to read it! That last bit you just described, that’s how I felt about my album. I felt the messiness. I was a bit of a mess, a lot of a mess, and then the process of somehow going through all those things, I came out a bit lighter.

Jacobson: I’m going to paraphrase Rebecca Solnit paraphrasing Virginia Woolf, which stuck with me: “When I write something then I can let it go, it’s out there, and I can be done with it. If I don’t write about it, it’s still lurking around and it’s messy.” This book, more than the show, is a thing where — because I felt so out of control sometimes — it’s me taking control of it and being like, “Oh, I guess this is my job.” I weirdly have a job where people pay me to figure my shit out, publicly.

Barnett: Isn’t that a weird concept?